The number of cycle parking spaces in the city will have gone up 10 per cent in just one year by April, the city council announced yesterday. 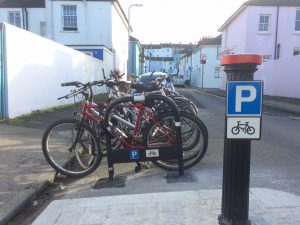 The last phase of new cycle stands for 2017-18 has just started being installed, which will provide space to park 124 bikes mainly in central Brighton and Hove, including Western Road, West Street, The Level and Palmeira Square.

Combined with stands for 74 bikes installed in Hanover and Elm Grove when the new parking scheme came in, this brings the total number for this financial year to just shy of 200 spaces.

Since 2006, the council has installed parking for almost 2,000 cycles.

Anyone can submit suggestions for locations for cycle stands using a form on the council website. New requests will be considered for the 2018-19 financial year.

Chair of the council’s Environment, Transport and Sustainability Committee, Councillor Gill Mitchell, said: “Cycle parking is a good use of limited space and money. You can park about 10 bikes in the space of one car.

“Cycling is growing so much here that it can be difficult to find a secure cycle parking space in some areas. So we’ll continue with more installations next year and we’ll keep asking developers to provide them as part of planning permissions.”

Cycling to work across the city doubled between 2001 and 2011 according to the census. Just under five per cent of its population cycle to work. Nine per cent of adult residents cycle at least once a week.

Southwick pensioner conned out of thousands by bogus meter reader