Police are being urged to investigate a graffiti attack on a grade II listed building in Brighton. 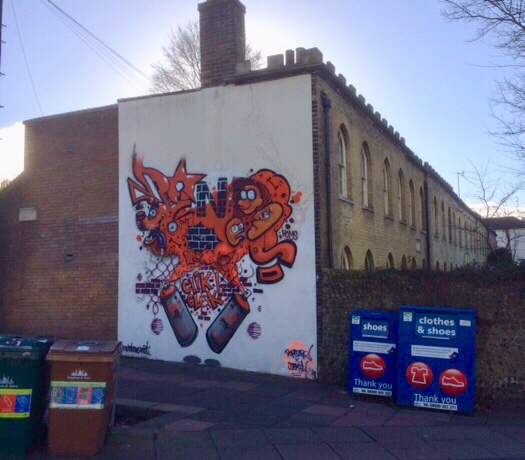 The damage to the historic almshouse terrace wall in Lewes Road could land the culprit with a six-month prison sentence.

Brighton and Hove City Council said that it was “investigating how a huge graffiti mural came to be painted on the side of a grade 2 listed building in Brighton”.

The council said: “The image appears on the end wall of the Percy and Wagner Almshouses in Lewes Road, dating back to 1795.

“It is thought to have been painted on or about (Monday) 8 January. The mural is signed with the Instagram handle @rainbowsnot.

“No permission was given by the property owner – a charitable trust – or the council as the body in charge of authorising changes to listed buildings.

“Planning enforcement officers say under the Planning (Listed Building and Conservation Areas) Act, altering or extending a listed building without council permission is a criminal offence.”

Offences under the act are punishable with up to six months in prison and a fine of up to £20,000.

The council has asked the chair of trustees, who is responsible for the almshouses, to repaint the wall within 14 days.

The council said: “The trust is equally dismayed at the image and have told officials the wall will be reinstated within this timeframe.

“The trust will have the option to consider civil action against the perpetrator for costs and damage to the property.

“Cleaning graffiti from private buildings is the responsibility of owners. However, the council can intervene to clean obscene or racist graffiti from any surface.”

Councillor Julie Cattell, who chairs the council’s Planning Committee, said: “This appears to be a case of damage to property on a grand scale which we would expect the police to look into with the support of the trust.

“It would be good if the person who painted it repaid the charity for the costs this will incur them.

“It’s a heartless thing to do to that lovely old terrace.

“We have established whoever did it had no permission from anyone despite claims to passers-by that they did.”