A director of the property company behind a recent Peacehaven housing scheme has been banned from the road after crashing his Mercedes car while drink driving.

After failing a breath test Colin Delaney, 56, a director of Turnbull Homes, said: “I should have had a bigger burger.”

Delaney, whose business recently built 14 houses at The Heights, in South Coast Road, Peacehaven, told Sussex Police that he had had “a couple of glasses of wine at lunch time” before the crash.

He smashed into the back of a green Ford Transit while at the wheel of his silver Mercedes CL500 on the M23 just south of junction 9 near Crawley.

Sussex Police said: “Both vehicles sustained extensive damage as a result of the collision, which occurred at about 7.40pm on (Wednesday) 31 May 2017.

“It caused the entire southbound carriageway to be closed for about 30 minutes while the vehicles were recovered and debris was cleared from the scene. 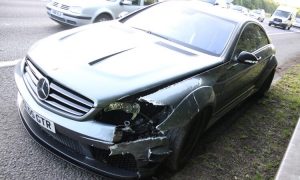 “Delaney, 56, a director, of Hammerpond Road, Plummers Plain, Horsham, failed a roadside breath test and was subsequently charged with driving with 40mcg of alcohol per 100ml of breath in his system.

“He showed no remorse for his actions and was more interested in finding out how far over the limit he was.

“When the arresting officer advised him of the breath test reading, Delaney replied: ‘I should have had a bigger burger.’

“At Horsham Magistrates’ Court on Monday (5 February), he was disqualified from driving for 13 months. He was also fined £300 and ordered to pay £450 costs and a £30 victim surcharge.”

Arresting officer PC Brad Simms said: “Eating a bigger meal would have had a minimal impact on the breath test reading Delaney recorded.

“Instead of worrying about how close to the legal limit he was, Delaney could have guaranteed he was safe to drive by not drinking altogether.

“The effects of alcohol vary from person to person and depend on a number of factors including age, weight, sex, metabolism, type of alcohol, what a person has eaten recently and their stress levels at the time. 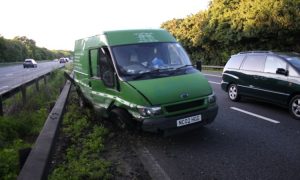 “Delaney made a conscious decision to drive having consumed alcohol earlier that day. In doing so he not only risked being over the limit, he also risked his own life and the lives of other road users.

“Aside from being illegal, drink driving is socially unacceptable and Sussex Police will prosecute anyone caught committing the offence.

“Our advice is simple – drink or drive. Never both.”