A closed-circuit television (CCTV) camera filmed a white van man stealing a bike from outside a house in Brighton. 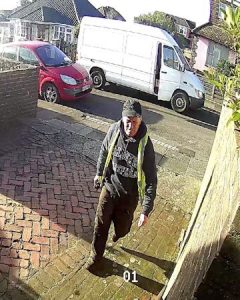 Sussex Police released a still photo as they asked for the public’s help to identify the man.

The force said: “A brazen thief pulled up outside a house in Woodingdean and stole a bicycle from the driveway but apparently didn’t notice the security camera that caught him the act.

“The man, who was driving a white van, made his move at 12.14pm on Saturday 20 January, loading up the bike from the driveway in Baywood Gardens and driving off.

“Police are looking to identify the man and would also like to hear from people who are understood to have commented on local social media about similar incidents but have not reported them.