Transport Minister Nusrat Ghani visited Brighton and Hove Buses to find out how the award-winning company has been cutting pollution and improving accessibility.

The minister, who is also the MP for the Sussex seat of Wealden, spent a couple of hours with bus bosses on Friday (2 March).

She said: “It was brilliant to hear about Brighton and Hove’s initiatives to make its buses greener and more accessible as well as its strategies to tackle congestion.

“People with disabilities must have the same opportunities to access transport as everyone else and I was impressed with Brighton’s ‘intelligent’ buses which clearly consider the needs of these passengers.

“It was encouraging to hear about the company’s ambition for a fleet of entirely emissions-free buses which will make a real difference in improving the local air quality.”

Brighton and Hove Buses managing director Martin Harris said: “I welcome the minister’s position championing buses, her insight that the industry’s biggest obstacle is congestion and her foresight that buses will become even more vital in the future.

“It’s been really valuable to host this visit. Buses are going through a technological revolution in front of our very eyes. The air pollution debate has been a game changer for the industry.

“Brighton and Hove Buses is well on its way to the future where the bus service will be wholly sustainable and emissions free.

“These new generation nearly emissions-free buses are a fantastic place to be in the interim while we work towards a clean air city.”

The minister was told that a third of the company’s fleet was now made up of nearly emissions-free buses – so “intelligent” that they reuse and convert energy to such an extent, they emit negligible amounts of pollution.

These buses, she was told, were uniquely designed for Brighton and Hove Buses with accessibility in mind.

They come with a lighter floor colour, specifically for people living with dementia, and are generally more spacious in the gangway to make it easier for people with disabilities or the elderly to make their way to a seat. 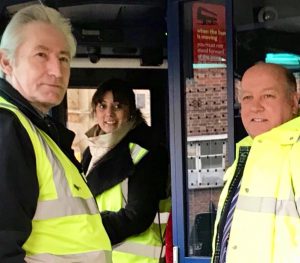 Nusrat Ghani, who became an MP in 2015, was appointed Transport Minister in the latest government reshuffle in January with specific responsibility for buses and accessibility on public transport.

A pioneering scheme started by Brighton and Hove Buses has gone nationwide, giving passengers with extra needs a chance to let drivers know discreetly what help they need.

The award-winning Helping Hand scheme works using a card that passengers can give to drivers, it contains details of what help is needed.

Go-Ahead, the transport company that owns Brighton and Hove Buses, has started using the cards on its buses up and down the country.

The company said: “The card can be particularly helpful for customers with hidden disabilities.”