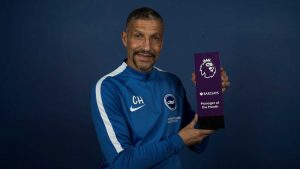 Manager of the Month Chris Hughton

Albion are unbeaten since losing to Chelsea on Saturday 20 January.

The club have won successive home matches in the League against West Ham United, Swansea City and most recently Arsenal.

The Seagulls also drew away to Stoke City.

It is a tremendous accolade for Hughton when considering the competition for the prize, with Pep Guardiola, Jurgen Klopp and Jose Mourinho also having had good results in February.

Hughton said: “It’s a great achievement for the club and certainly for a group of players that have improved as the season has gone on.

“It’s confidence that’s built up through the season and it’s a good period to have what is our best run of form.

“We’ve got momentum at the moment and we also look like scoring goals.”