A Brighton woman had to be cut out of her car after crashing into a fire engine which was attending a smoking horse box on Saturday. 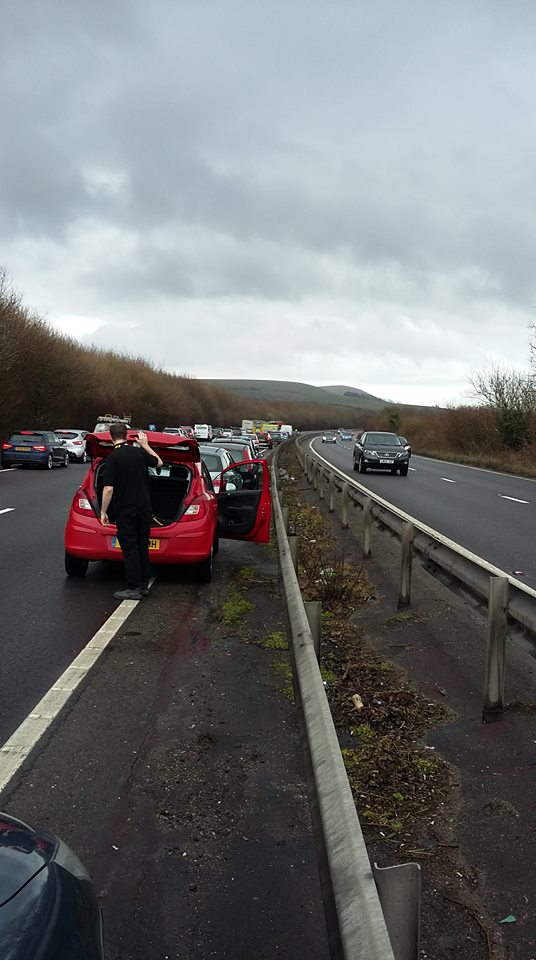 Tailbacks on the A27 following the crash

The crash happened shortly before 3pm on the A27 between the Kingston and Southerham roundabouts, closing the eastbound carriageway and causing long tailbacks.

Fire appliances from Lewes, Newhaven and Brighton were called to reports of smoke coming from the horsebox. The horse was taken out and left in the layby.

A police spokesman said: “A driver was slightly injured when two cars were involved in a collision with a fire appliance attending a smoking horsebox on the A27 Lewes by-pass on Saturday (March 10).

“Firefighters had been called to the scene around 2.40pm and as they arrived, two other vehicles collided with one of them then going on to crash into the Volvo fire appliance.

“A 46-year-old woman from Brighton, driving a Nissan Almera was taken to the Royal Sussex County Hospital in Brighton for treatment to a suspected shoulder injury, but was not detained.

“The eastbound carriageway was closed for a while by the incident.

“Any witnesses are asked to report online at https://www.sussex.police.uk/rtcappealresponse or call 101 quoting serial 694 of 10/03.”

A spokeswoman for East Sussex Fire and Rescue said: “Crews from Lewes, Newhaven and Brighton attended A27 between Kingston and Southerham roundabouts following reports of smoke emanating from a horsebox. The horse was left in situ in a layby.

“Whilst attending, one fire appliance was hit by a car. Crews released one person from a car using hydraulic cutting gear and was handed over into the care of SECAMB.”

A spokesman for South East Coast Ambulance Service said: “One ambulance crew attended the scene and a woman with potential neck injuries was treated before being taken to Royal Sussex County Hospital.”