‘Hanx!’ To Stiff Little Fingers and Ruts DC for a great night out in Brighton 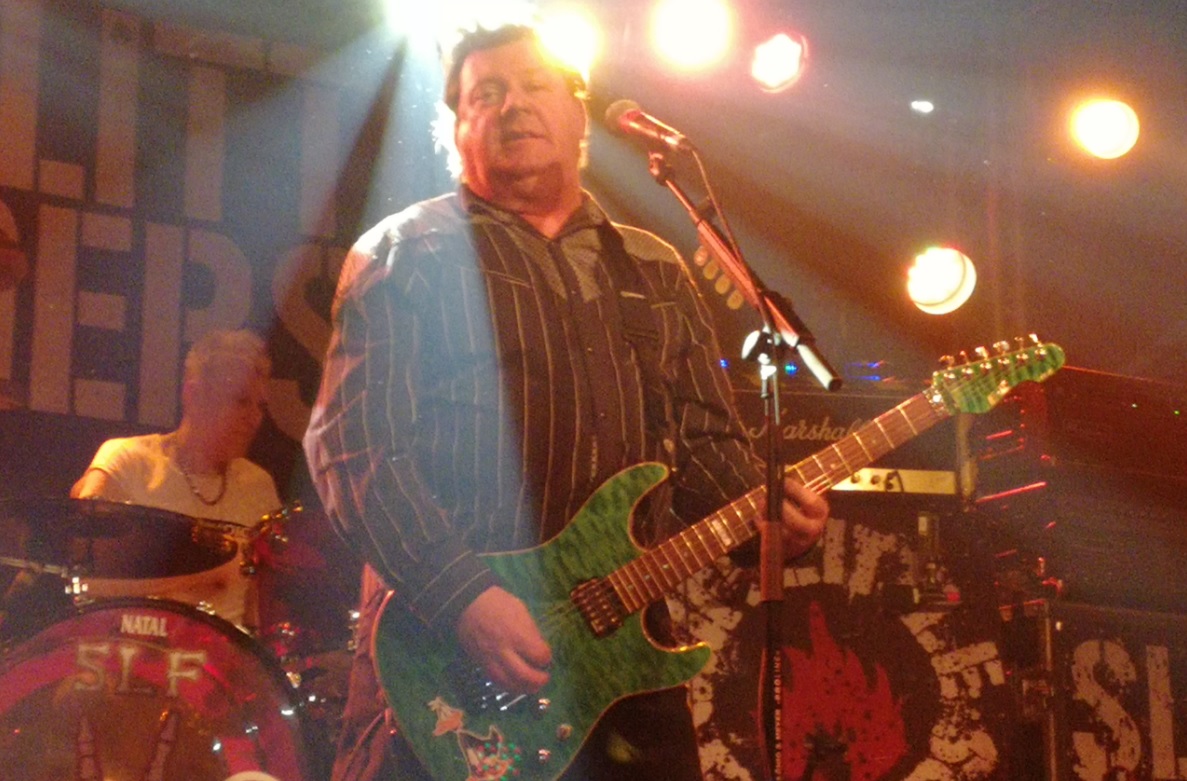 Tonight, Brighton seafront was alive with the sound of musical mayhem and glorious punk, as the distinctive Concorde 2 venue played host to the return of Ireland’s finest, Stiff Little Fingers, along with popular Londoners Ruts DC.

The mood this evening was set accordingly by the blasting out of tracks on the PA which included the likes of Desmond Dekker & The Aces ‘The Israelites’ and Althea & Donna’s ‘Uptown Top Ranking’.

Stiff Little Fingers (SLF) were formed in 1977 in Belfast and along with the likes of The Clash, The Sex Pistols, The Jam, Buzzcocks, Undertones, Sham 69 and The Stranglers were at the forefront of the punk movement. 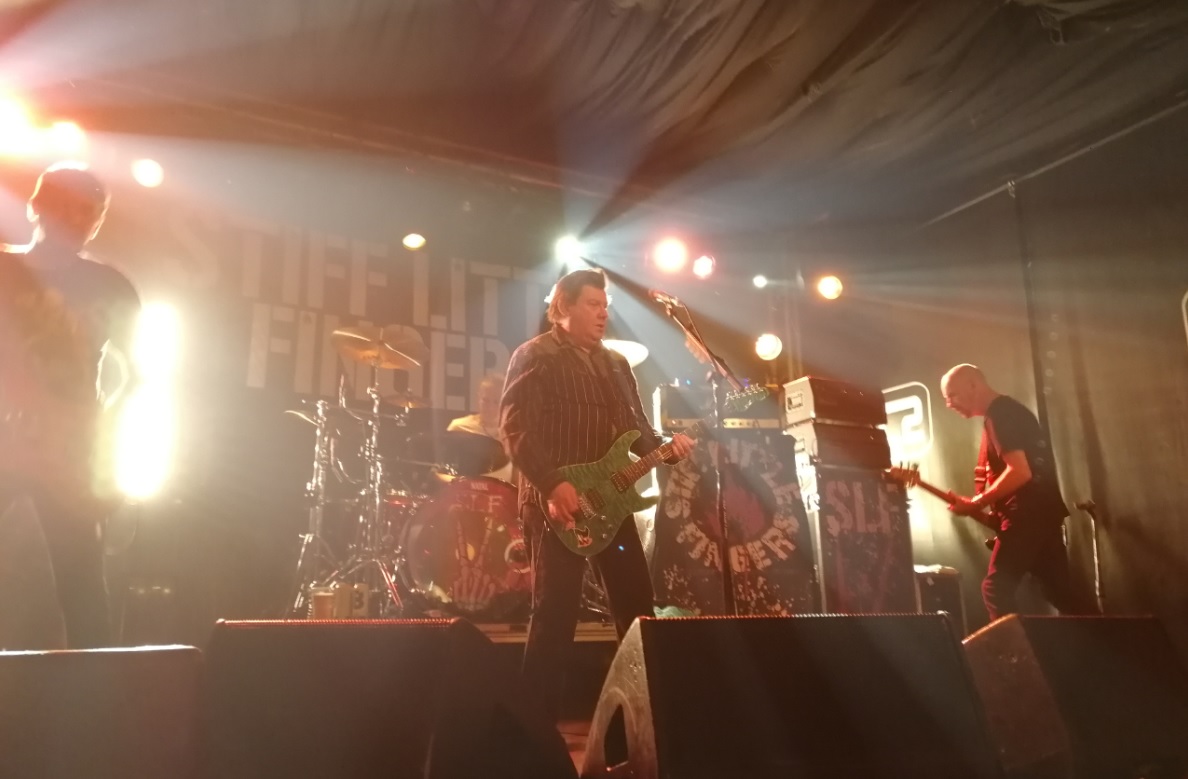 SLF wrote initially about their own lives, growing up at the height of ‘The Troubles’ in Northern Ireland, in songs like ‘Suspect Device’ and ‘Wasted Life’. In November of ’77, they released those two songs on their own Rigid Digits label, and sent a copy to legendary BBC Radio One DJ John Peel, who became a massive fan and started playing it every night.

These were the first of what became SLF’s signature style: lyrics that meld the personal and political, music that combines the energy of punk with infectious hooks, and delivery that rings of honesty and commitment. In 1979 they became the first band ever to hit the UK top 20 album charts on an independent label (Rough Trade) with their debut ‘Inflammable Material’. The album chronicles the band’s anger and frustration at ‘The Troubles’ in Northern Ireland, and calls on youth to create their own reality. 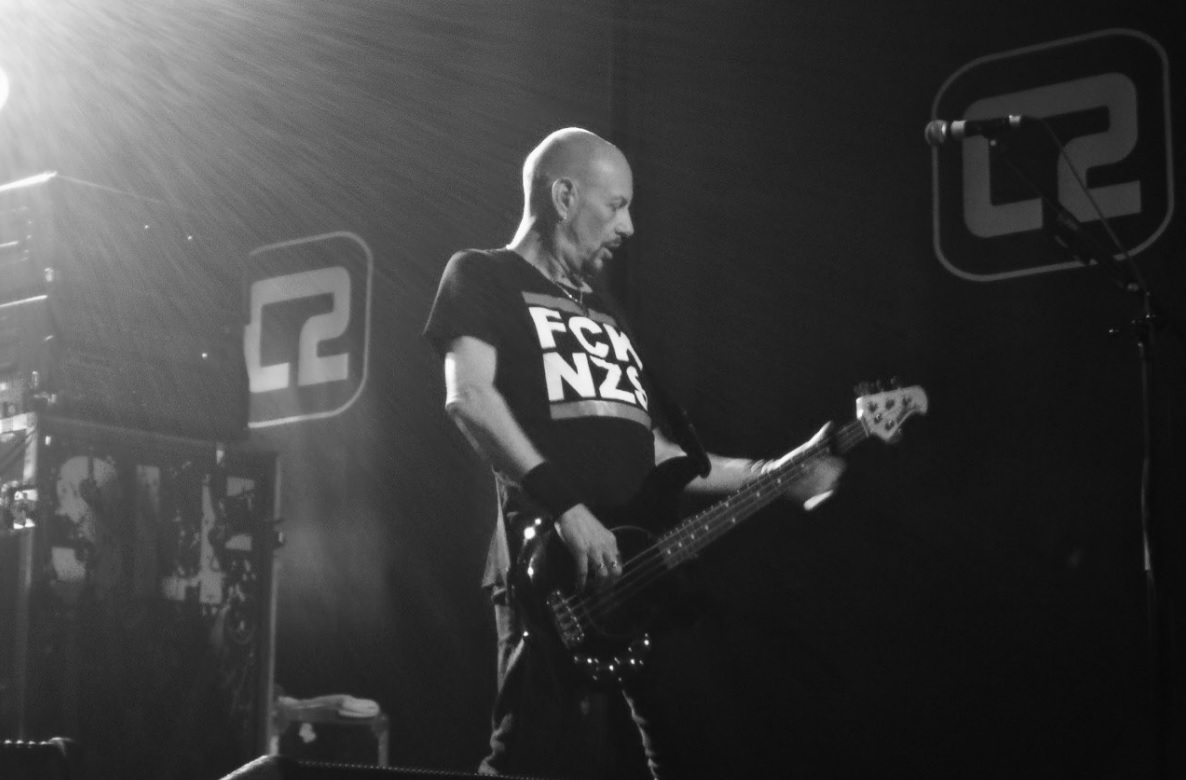 Ali McMordie of Stiff Little Fingers live at the Concorde 2 22.3.18

Over the years, their live shows have continued to be special events full of energy and power, just like this evening’s sold out gig. They always play the old favourites such as “Alternative Ulster” or “Suspect Device” at gigs as indeed they finished with tonight, however these are interspersed with newer material, although as singer Jake Burns commented this evening, that it has been a long four years since the release of their last studio album, which is entitled ‘No Going Back’.

The current Stiff Little Fingers line-up is made up of founder members Jake Burns (60) on lead vocals and guitar and Ali McMordie (58) on bass, as well as Ian McCallum (52) on guitar since 1993 and Steve Grantley (56) on drums since 1996. The guys were well and truly on form tonight and the rammed crowd were well up for having a great time. The crowd at the front were rather boisterous during the classic songs and my poor body bears the bruises, having been right at the very front leaning against the metal barriers. But hey, that’s part of the fun of it isn’t it.

Sadly there was no ‘Fly The Flag’ tonight and surprisingly ‘Johnny Was’ was omitted from the set, although it shows on the setlist. Having said that the highlights of their set were the aforementioned ‘Suspect Device’ and ‘Wasted Life’, as well as ‘Tin Soldiers’, ‘Gotta Getaway’ and brand new unreleased track ‘Tilting At Windmills’. 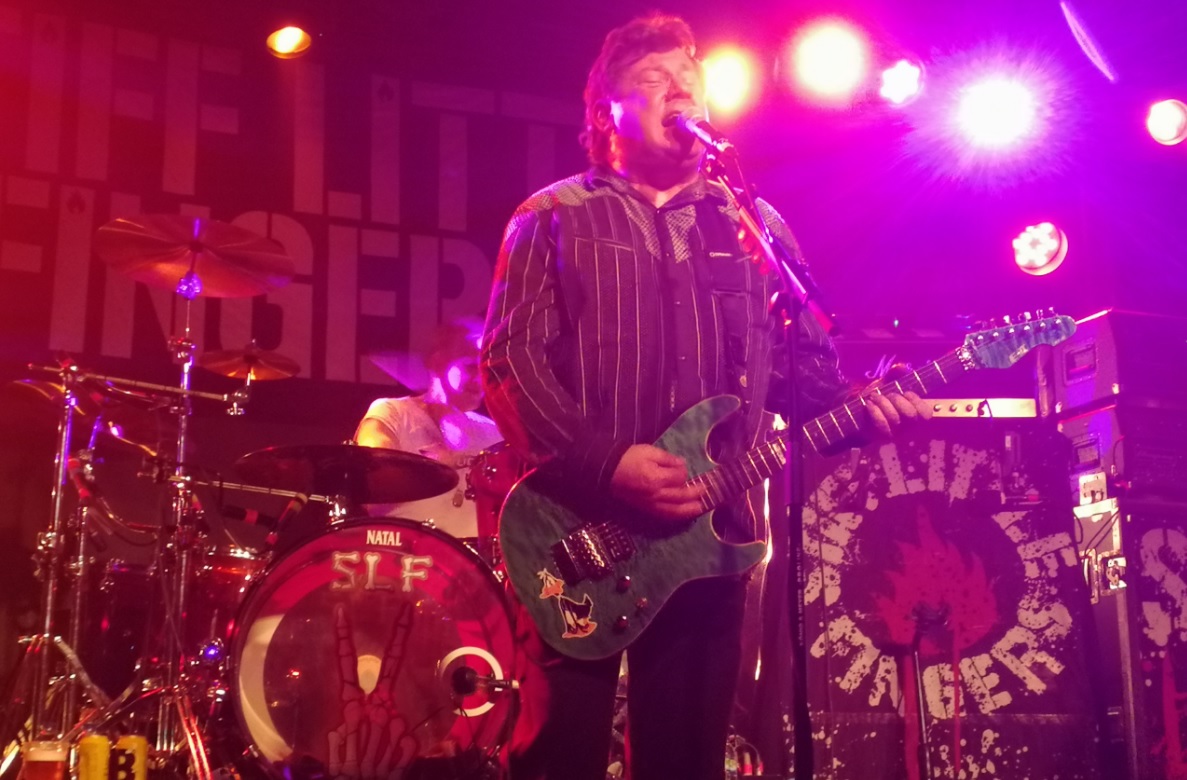 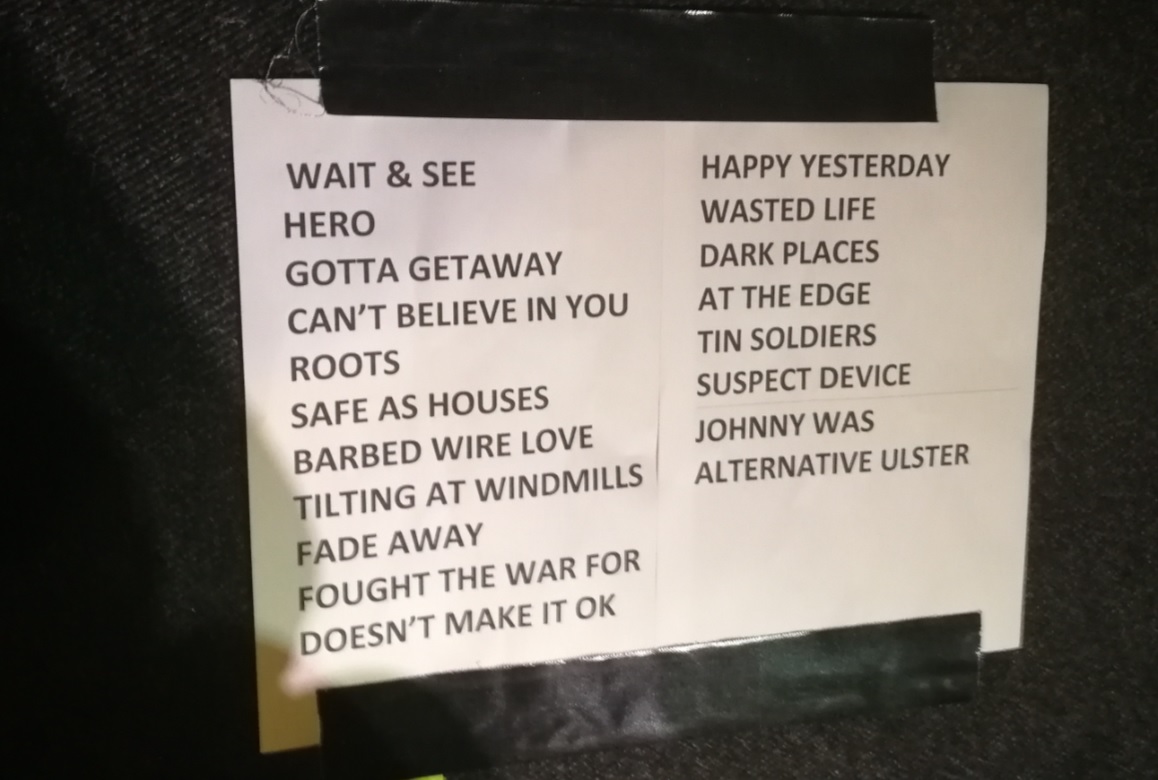 SLF setlist clearly showing ‘Johnny Was’ that was sadly dropped

This evening was virtually a double-bill as the first band on stage was reggae influenced punks Ruts DC. 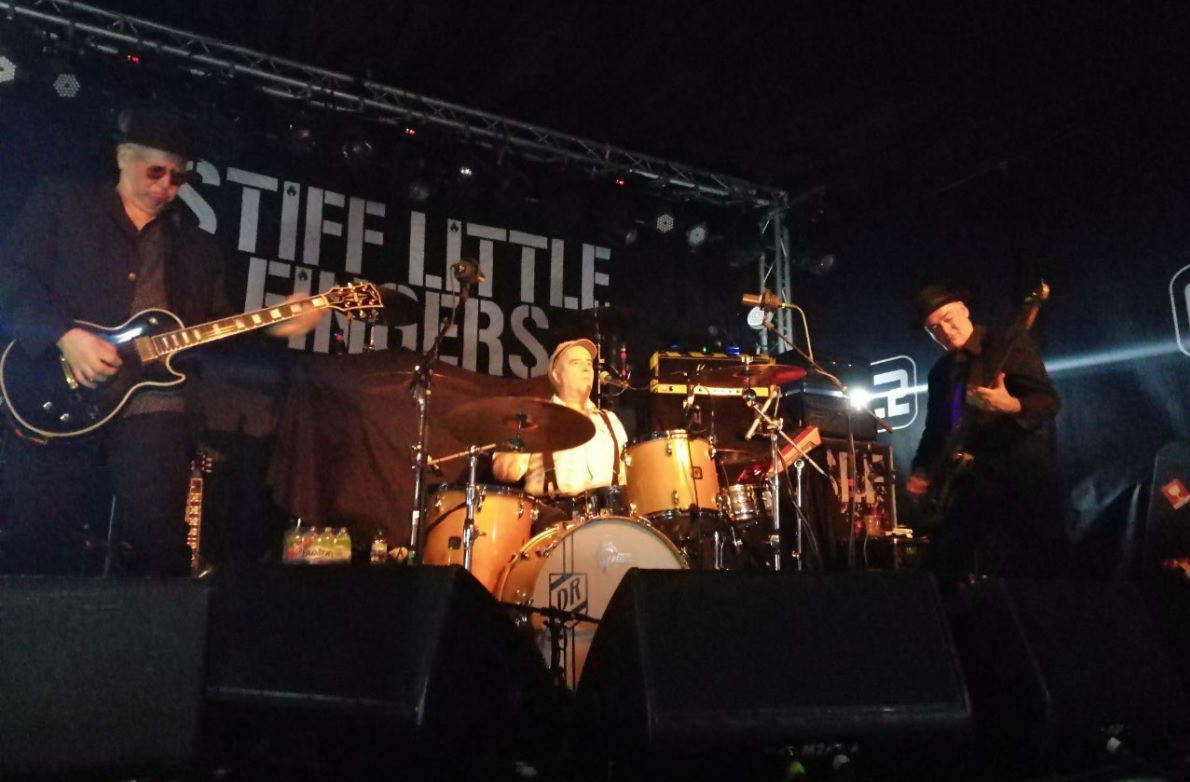 The band incorporated DC into their name after the sad death of singer Malcolm Owen in 1980 from a heroin overdose. The Ruts had formed in 1977 and endeavoured to carry on as a 3-piece until 1983, when the guys David Ruffy (drums), John ‘Segs’ Jennings (bass) and Paul Fox (guitar) called it a day.

The band reconveined in 2007 in order to perform a benefit gig for Paul Fox who had been diagnosed with lung cancer and sadly died just three months later. His place on guitar duty has nowadays been filled by Leigh Heggarty. These days the vocals are handled by founding member and bassist John ‘Segs’ Jennings with David Ruffy still on drums. 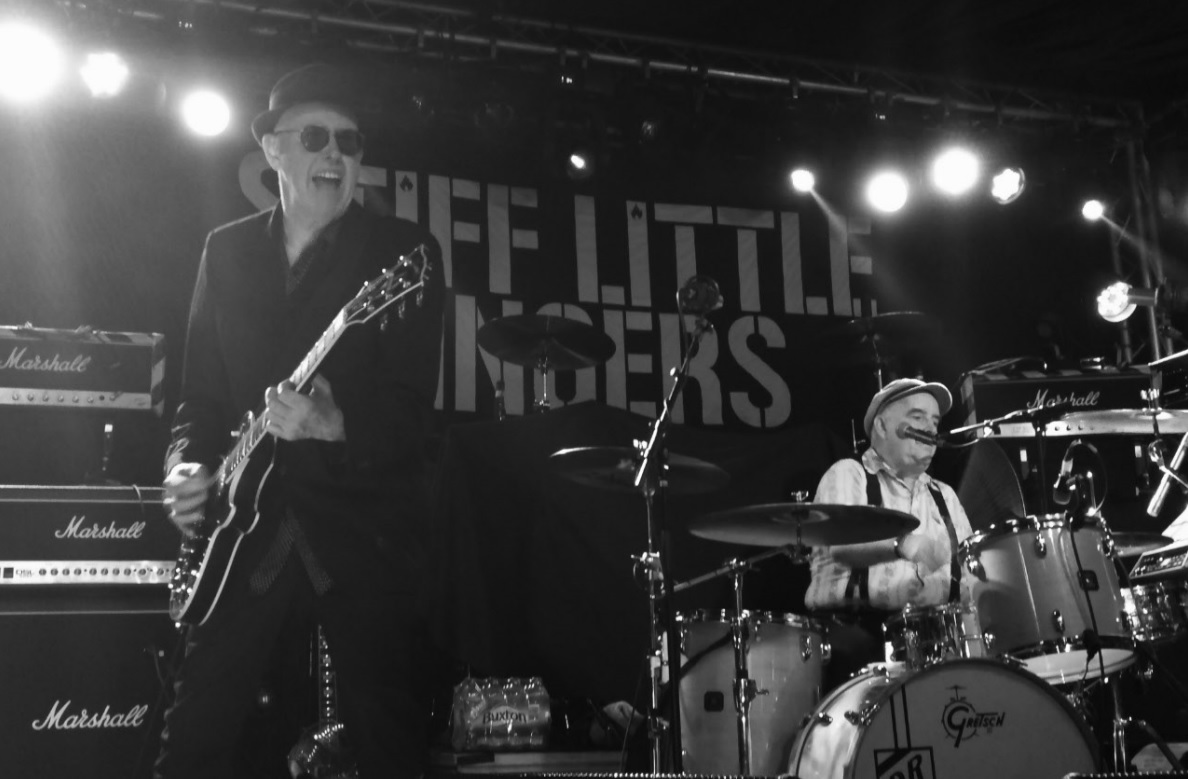 The Ruts are most remembered for their Top 10 single ‘Babylon’s Burning’ and the ‘In A Rut’ single, which both can be found on The Ruts 1980 album ‘Grin & Bear It’.

Amazingly, this was the first time I had ever witnessed Ruts DC live, having never seen The Ruts back in the day. They had somehow eluded me and to be honest there weren’t many punk bands that got away so to speak, as down the years I have been very fortunate to have seen a large proportion of the bigger names. I have seen Stiff Little Fingers on a number of occasions, as well as The Buzzcocks, The Ramones, The Sex Pistols, The Clash, Public Image Limited, The Dead Kennedys, Killing Joke, The Undertones and The Exploited to name just a few. 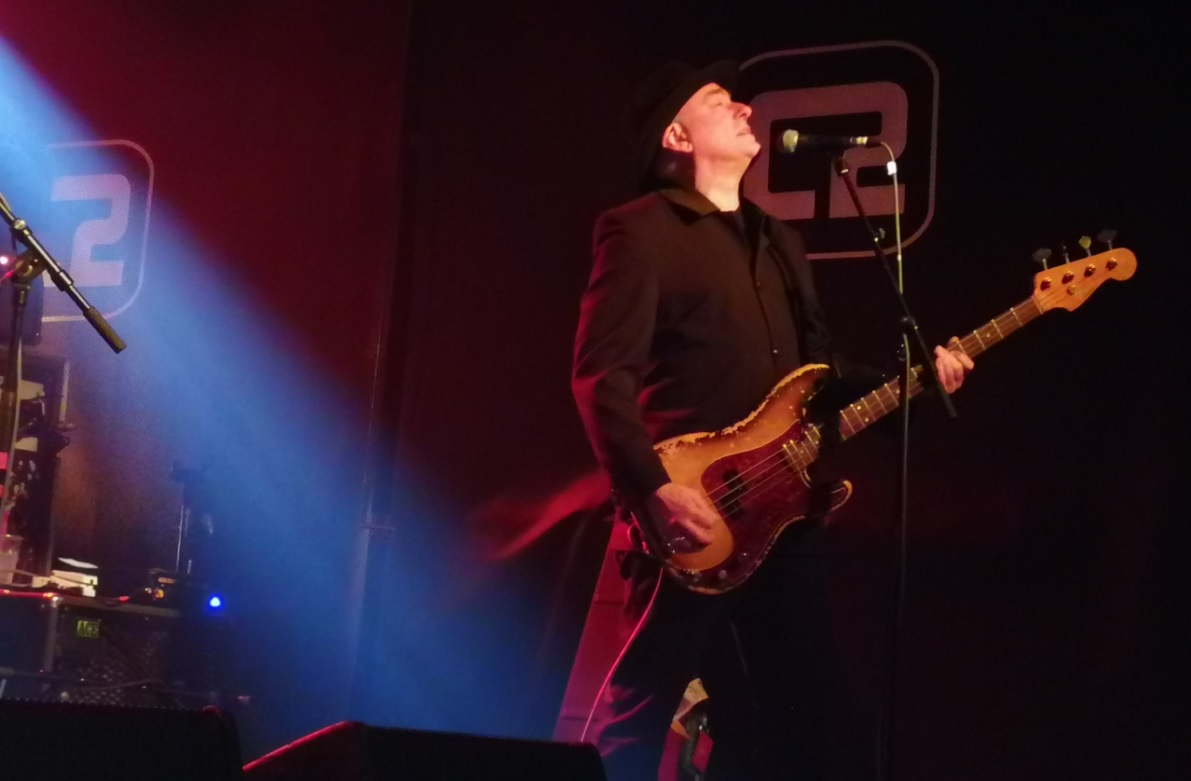 Based on tonight’s Ruts DC performance, I would actually label them as reggae dub rock band not necessarily an outright punk rock outfit. They easily converted the crowd and just like SLF, they went down a storm.

I was unable to locate a setlist but the Ruts DC songs tonight included: ‘Staring At The Rude Boys’, ‘SUS’, ‘Music Must Destroy’, ‘Jah War’, ‘In A Rut’, ‘Babylon’s Burning’ 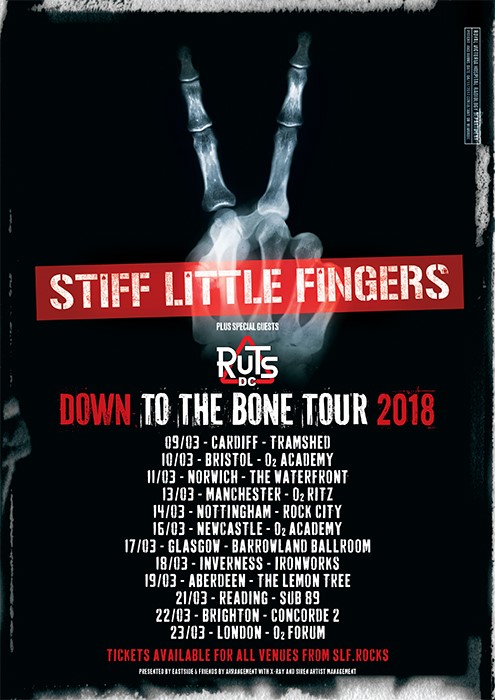