Brighton hospital bosses have landed a £650,000 donation on their new helideck atop the Thomas Kemp Tower. 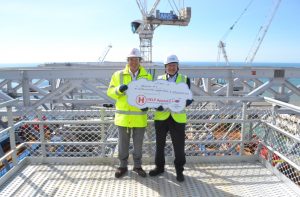 Robert Bertram, from the HELP Appeal, and Duane Passman

Duane Passman, the director in charge of the £485 million redevelopment of the Royal Sussex County Hospital, in Eastern Road, Brighton, received the six-figure cheque.

It came from the HELP Appeal – the only charity in the country dedicated to funding hospital helipads.

The money will be used to incorporate a state-of-the-art fire suppression system to keep the new helipad safe.

Brighton and Sussex University Hospitals NHS Trust, which runs the Royal Sussex, said: “Typically used for offshore oil rigs, the Deck Integrated Fire Fighting System (DIFFS) can extinguish a fire within 15 seconds by using a series of nozzles built into the helipad which spray water and foam.”

The Royal Sussex will be among the first five hospitals in the country to have the system in place.

The trust said: “The helipad, which is part of the major redevelopment of the hospital, is due to come into operation at the end of this year.

“It will enable air ambulances to land directly on the hospital site for the first time – a massive boost to the hospital’s role as the region’s major trauma centre.”

Duane Passman said: “We are extremely grateful for this very generous donation. It will allow us to provide the highest possible level of safety on the helipad.

“As with all such safety systems, we are fitting DIFFS with the expectation and hope that we will never need to use it.

“If it is needed though, the extra level of guaranteed protection offered by DIFFS to patients and staff makes it a wise investment – one that is only possible thanks to this donation.”

Robert Bertram, chief executive of the HELP Appeal said: “The HELP Appeal will fund DIFFS on all hospital rooftop helipads across the country.

“This state-of-the-art technology will ensure the highest level of safety while enabling the hospital to save money.

“The Royal Sussex County Hospital’s helipad will be one of the safest in the country.”

Another advantage of the DIFFS set up is that it reduces the need for more traditional fire management measures on the helideck which would have had a greater running cost over time.