Arigatōgozaimashita to Shonen Knife for playing in Brighton 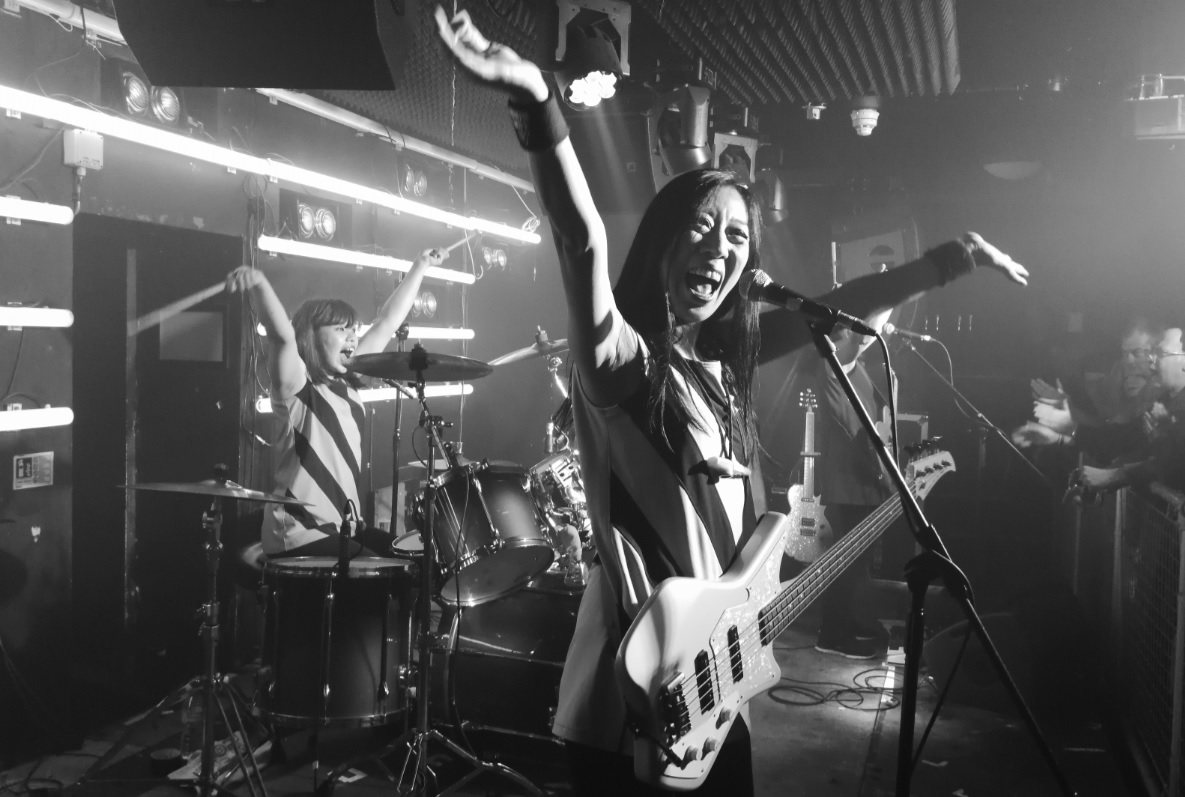 Last night, Patterns in Brighton was hosting an evening of sheer happiness from the exciting Japanese pop-punk band Shonen Knife.

The all-girl trio was formed in Osaka way back in December 1981 by sisters Naoko Yamano (vocals and guitar) and Atsuko Yamano (drums) along with their friend Michie Nakatani (bass). 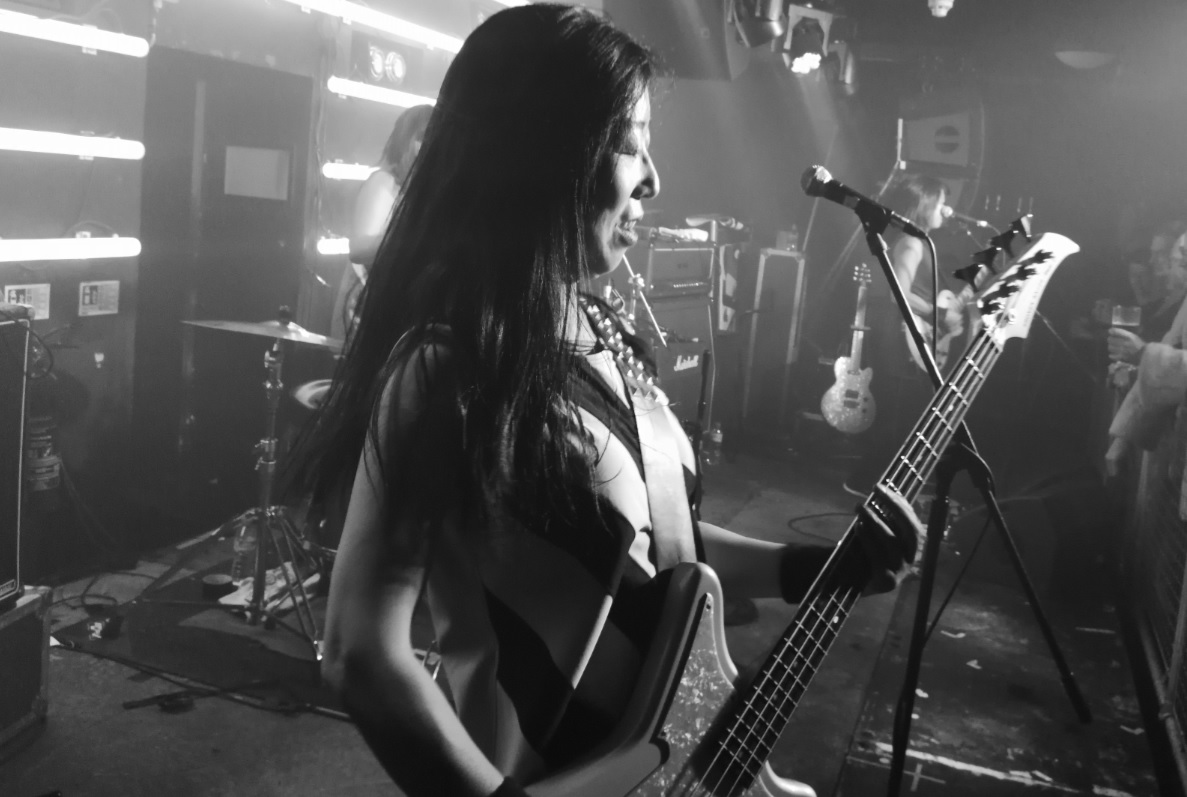 Shonen Knife live at Patterns, Brighton 7.4.18When Shonen Knife initially started, the band was something of an anomaly as they were coming in at a time where all-female bands were scarce. They totally ignored the then-rising, early J-Pop movement and instead began crafting their own blend of energetic rock songs rooted in rough instrumentation and do-it-yourself ethos.

The trio emphasize positivity using catchy, upbeat melodies and frivolous, carefree lyrics that often are about the things that they like such as food and tennis. The group describe their music as “oo-oo-ultra-eccentric-super-cult-punk-pop-band-shonen-knife!”

It was in 1991 that Nirvana’s Kurt Cobain famously said stated after seeing Shonen Knife live that “When I finally got to see them live, I was transformed into a hysterical nine-year-old girl at a Beatles concert.”

The Brighton crowd were treated to a career spanning nineteen song set made up of mainly fast toe-tapping numbers that lasted around three minutes each. The band had a vast amount of options when choosing songs to play as they have released more than twenty albums. It seemed that these ladies just really love to play to their adoring fans as they were continually smiling virtually all the way through their set, especially the younger drummer Risa. If I had smiled that much, my cheek bones would have been aching by the end of the night. 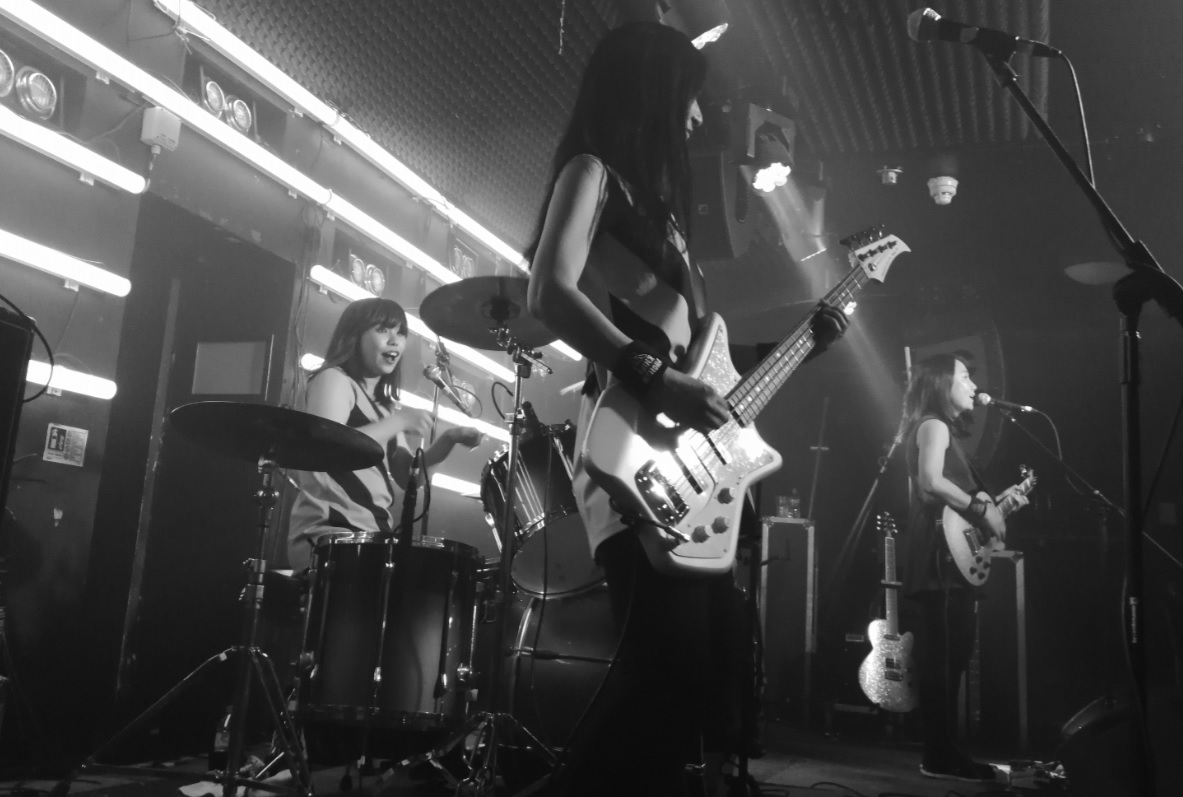 The set started at quite a fast page for several catchy songs ‘Pop Tune’, ‘Banana Chips’, ‘Twist Barbie’ and after a while slightly slowed to the middle of their set, only to pick up pace again near the end with ‘Antonio Baka Guy’. They surprising didn’t cover a Ramones song, which would have been the obvious selection for the Japanese Ramones, but instead of opting for Nick Lowe’s ‘Cruel To Be Kind’.

The crowd all really had a great time watching the band and several of them queued up afterwards to purchase the new live album and to meet the girls.

We have endeavoured to inform you lovely readers of the tracks that the Shonen ladies performed on the night. It is not as straightforward as you may think, as with most bands when they write their setlists they rarely write the whole song titles, then they sometimes change the running order or put in other tracks and take out others whilst they are up on stage. Plus in this instance, you add the complication of half of the song titles being written in Japanese, it’s get rather difficult.

Our solution was to kindly ask Yuko who is the wife of UK Subs legend Charlie Harper to help us out and this is what we have come up with. If anyone else can fill in the blanks then please inform us so that we can update it – ありがとう(Arigatō) = Thanks 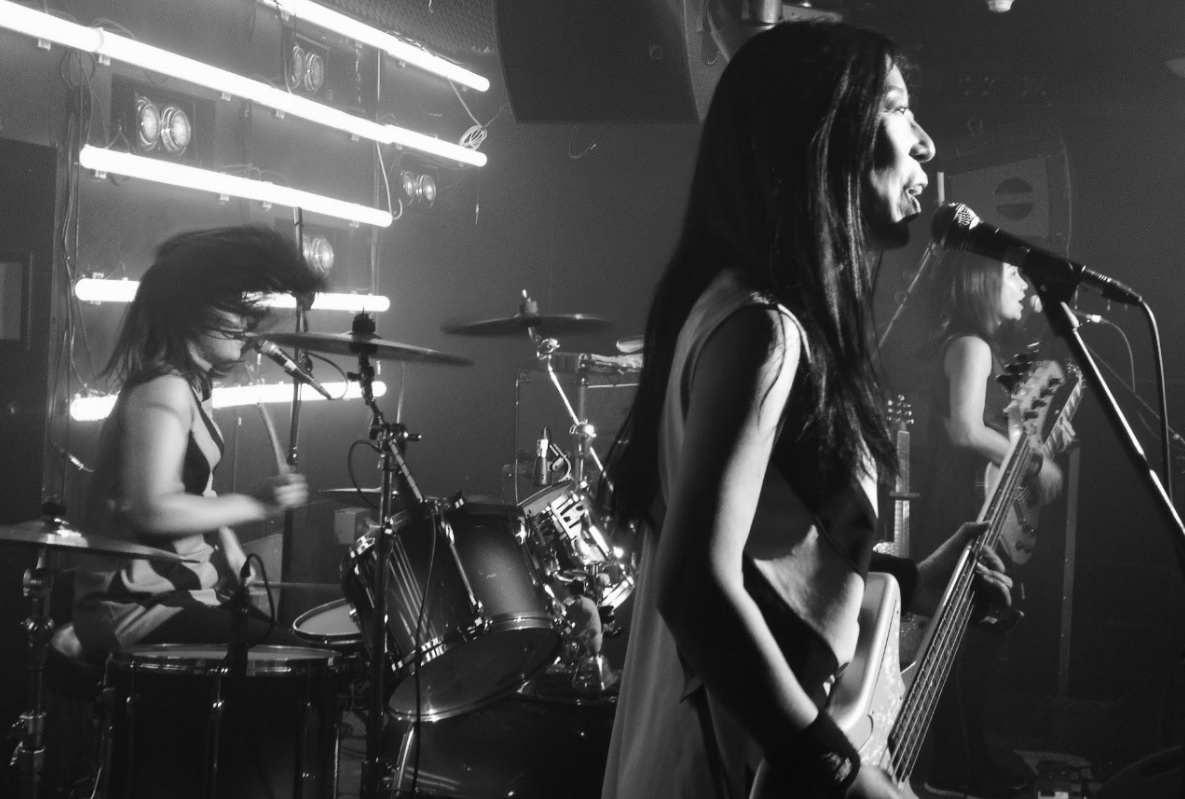 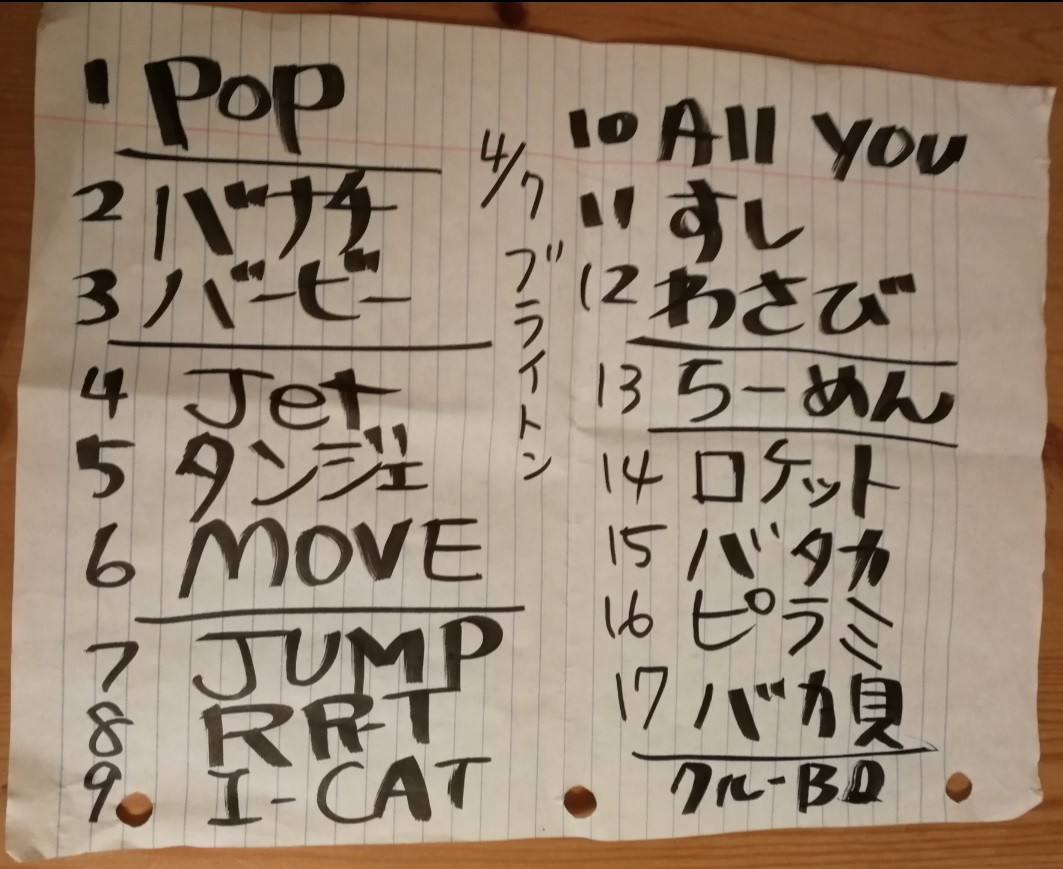 There were two support bands on the night – Ghost Car and Red Deer People. 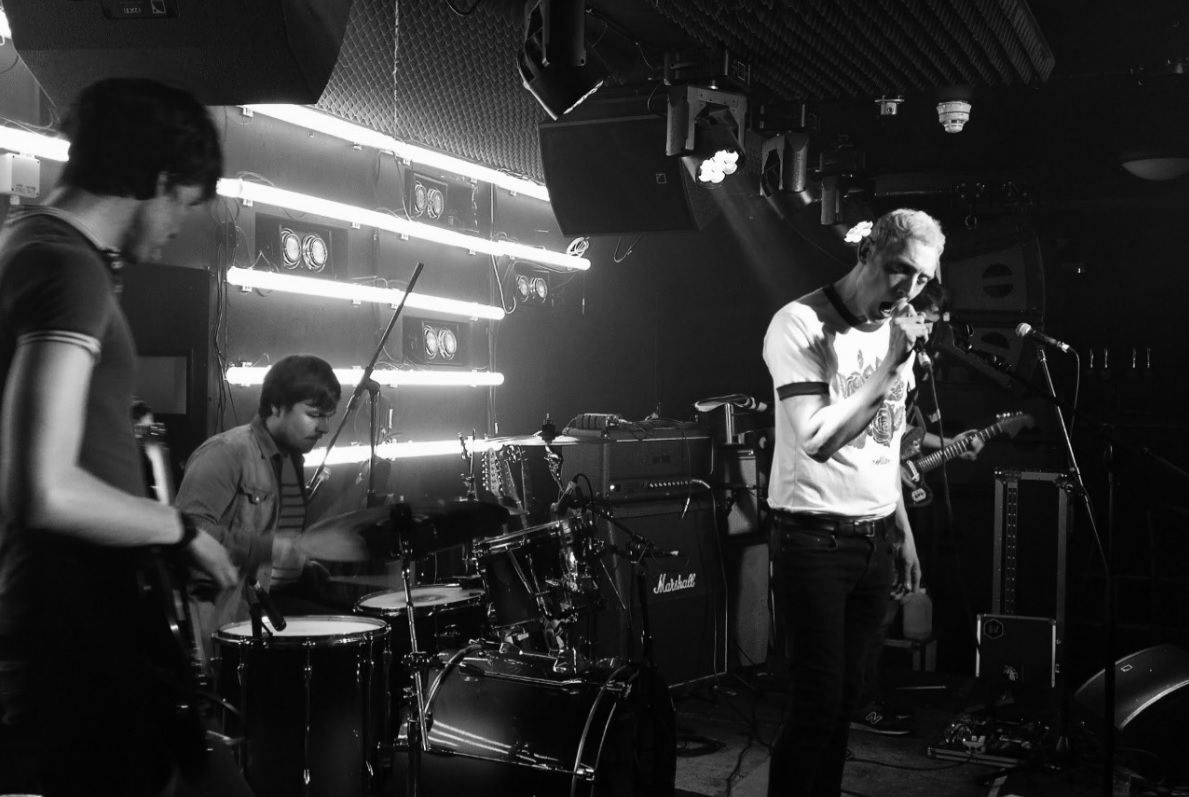 Brighton based Red Deer People were first up. They are four guys who I saw on 3rd January this year at the Green Door Store and this time at Patterns they were even better than first time around. 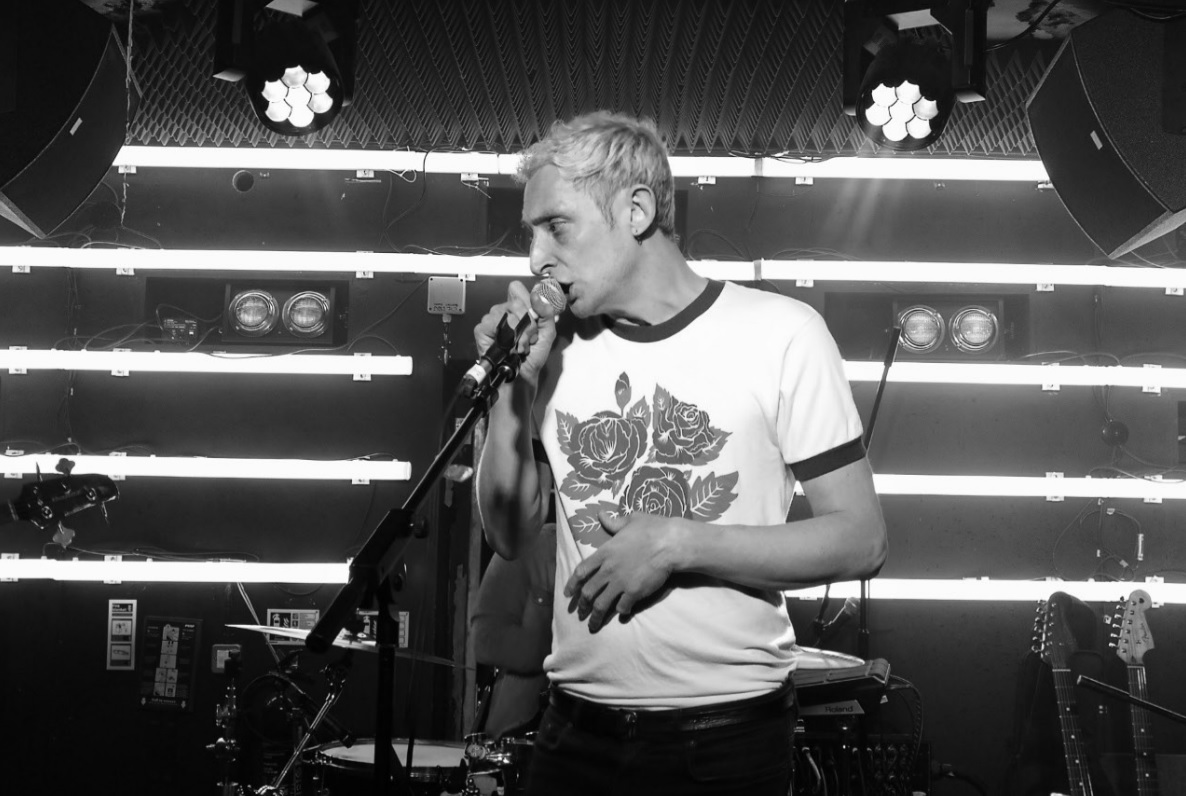 They opening with their forthcoming single ‘It Comes In Waves’ which the band are launching at the Latest Music Bar on Friday 27th April. Tickets here: http://www.wegottickets.com/event/431409 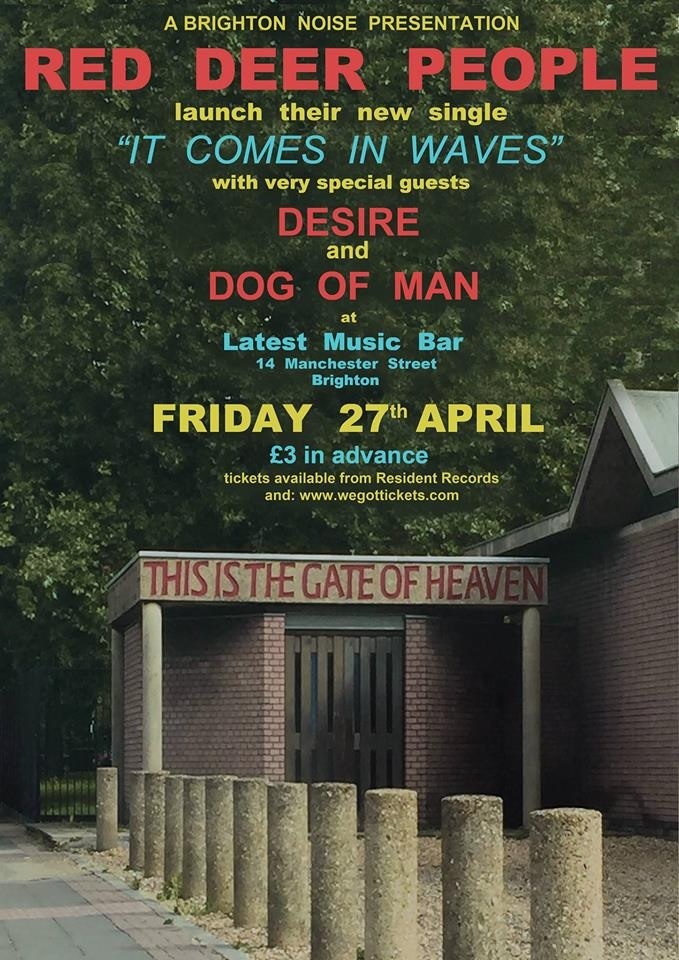 The Red Deer People brand of melodic snarly punk (in the vein of Joy Division, very early U2 and even late 60s druggy tracks) went down rather well with the audience. We were treated to a mere five tracks which consisted on their 2016 ‘Fun Fun Fun’ single followed by their last single ‘C’est Bon’ which clocks in at a mere 2 minutes. Their final track ‘God’s Great Workhorse’ sounds like Macclesfield’s Spring King. The RDP singer does remind me of Stephen Mallinder of Cabaret Voltaire back in their heady days. 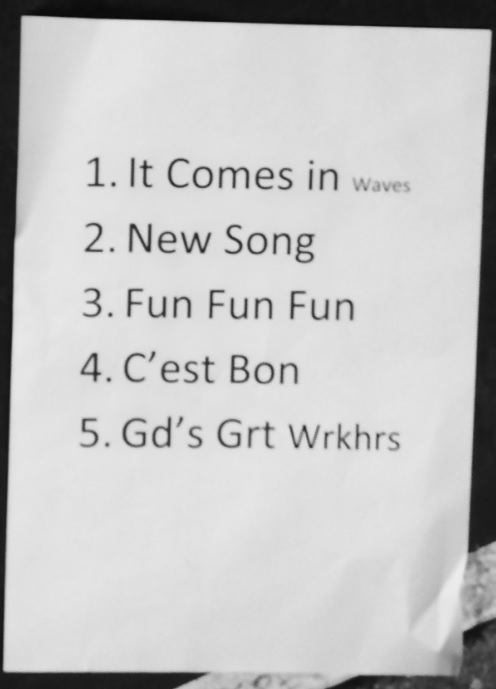 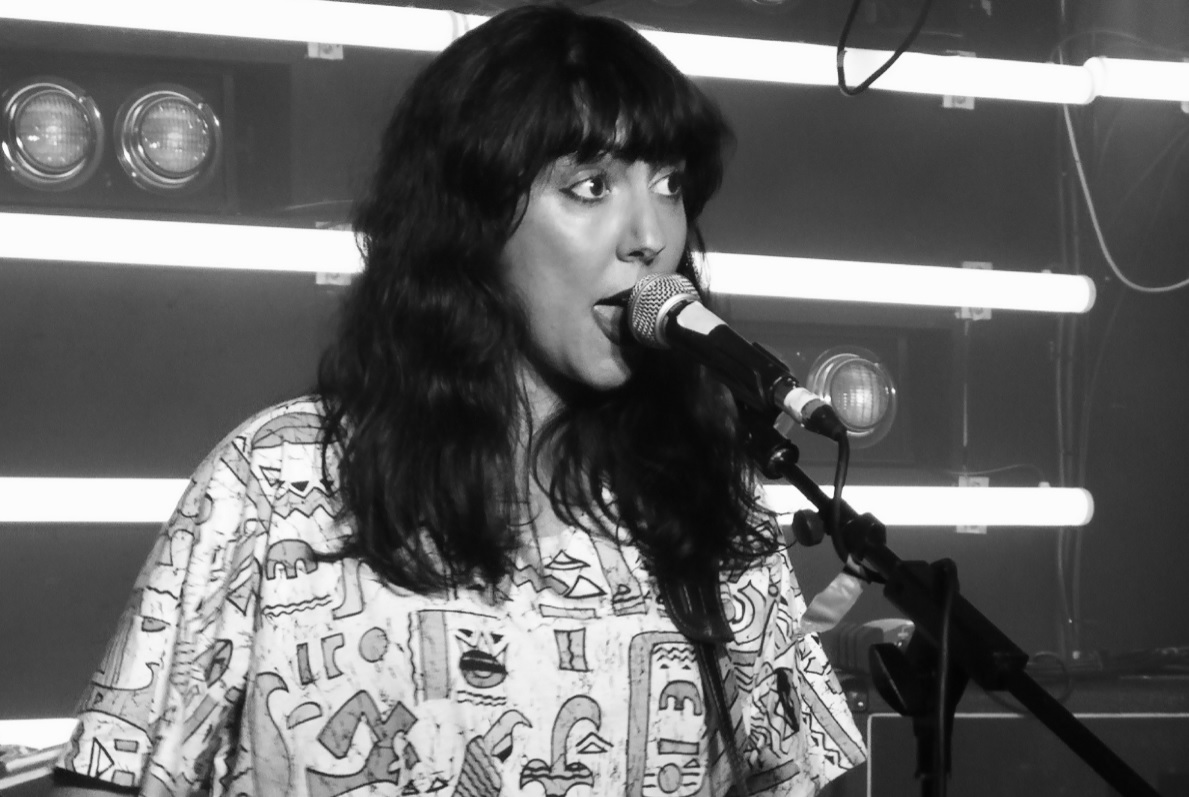 The other band on the bill was Ghost Car, who are a post punk garage band made up of Maeve, Clara, Laura and Maria. The 4 girls formed the band in the UK and are based in London and are originally from Ireland and Spain. 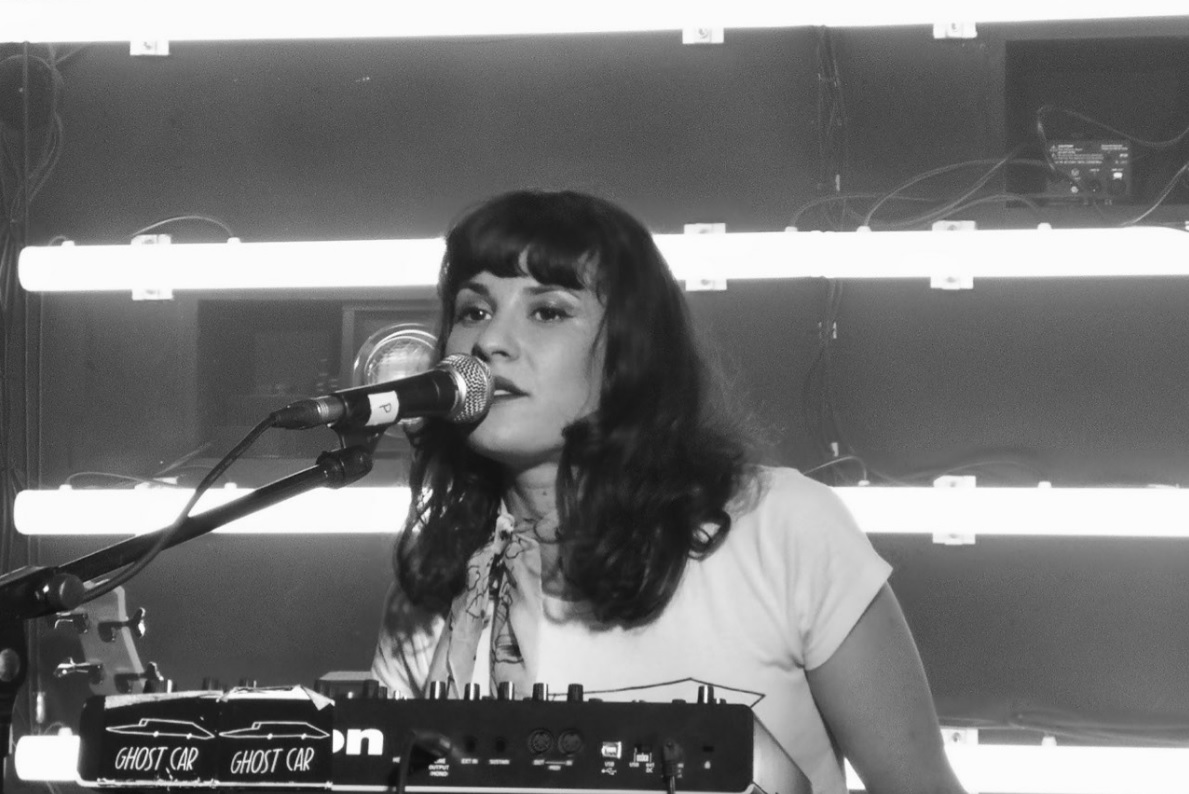 We were treated to a distinctive eight song set of sugar sweet vocal tracks in the mould of Lene Lovich and Clare Grogan (Altered Images), topped with powerful 60s style keyboards and some fantastic drumming. These ladies should be following on the heels of Hinds if they are lucky. Alas, due to time constraints they had to drop one track called ‘Polarize’. Hopefully they will come back down the A23 to Brighton very soon. 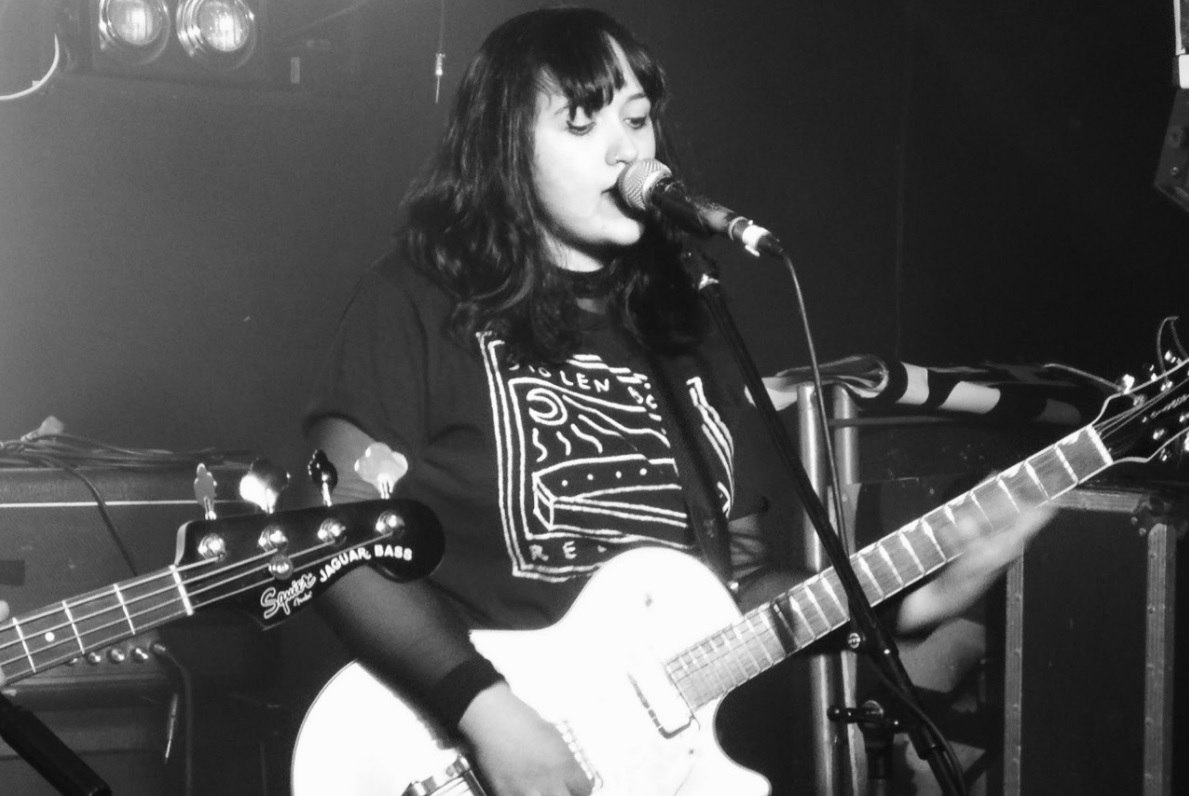 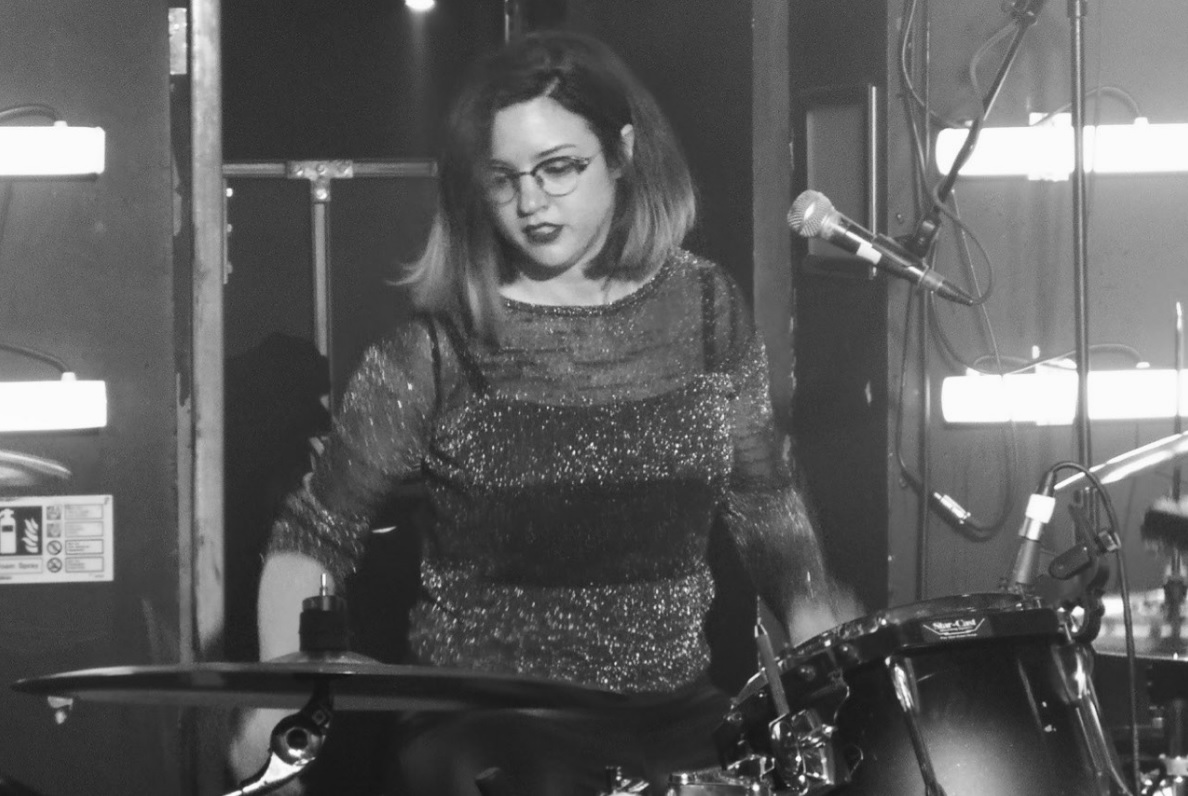 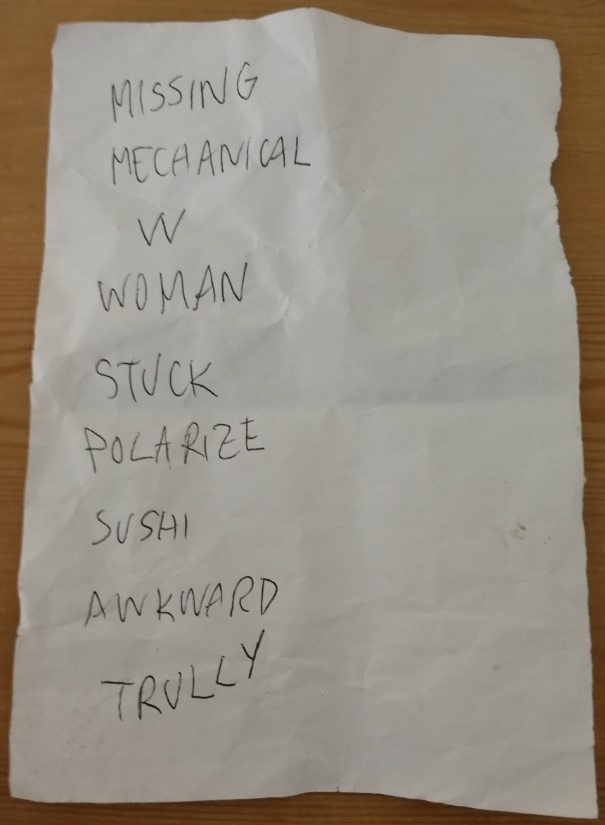 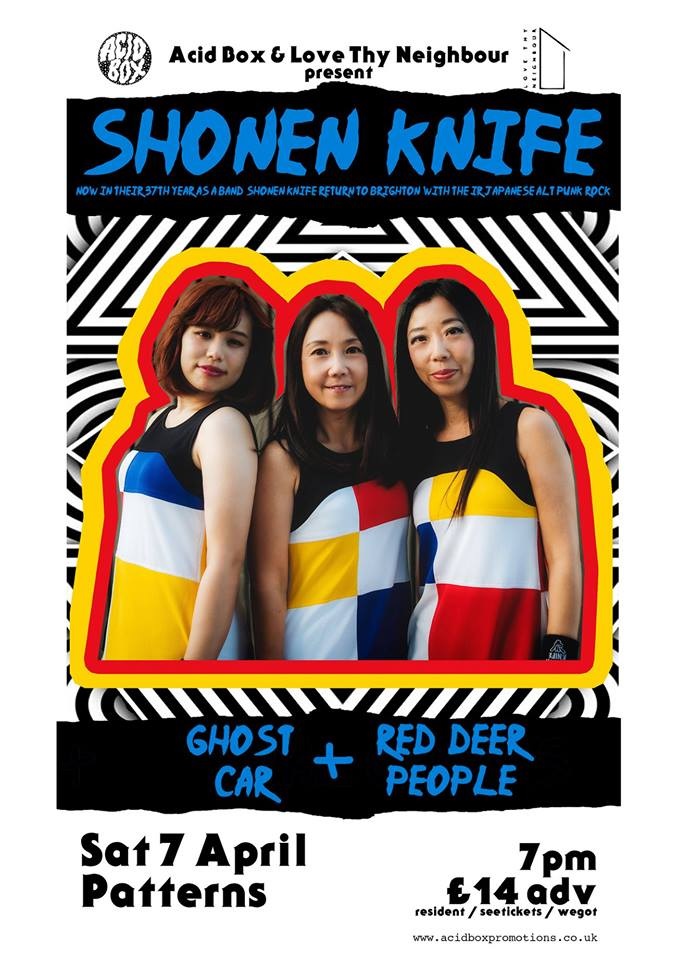 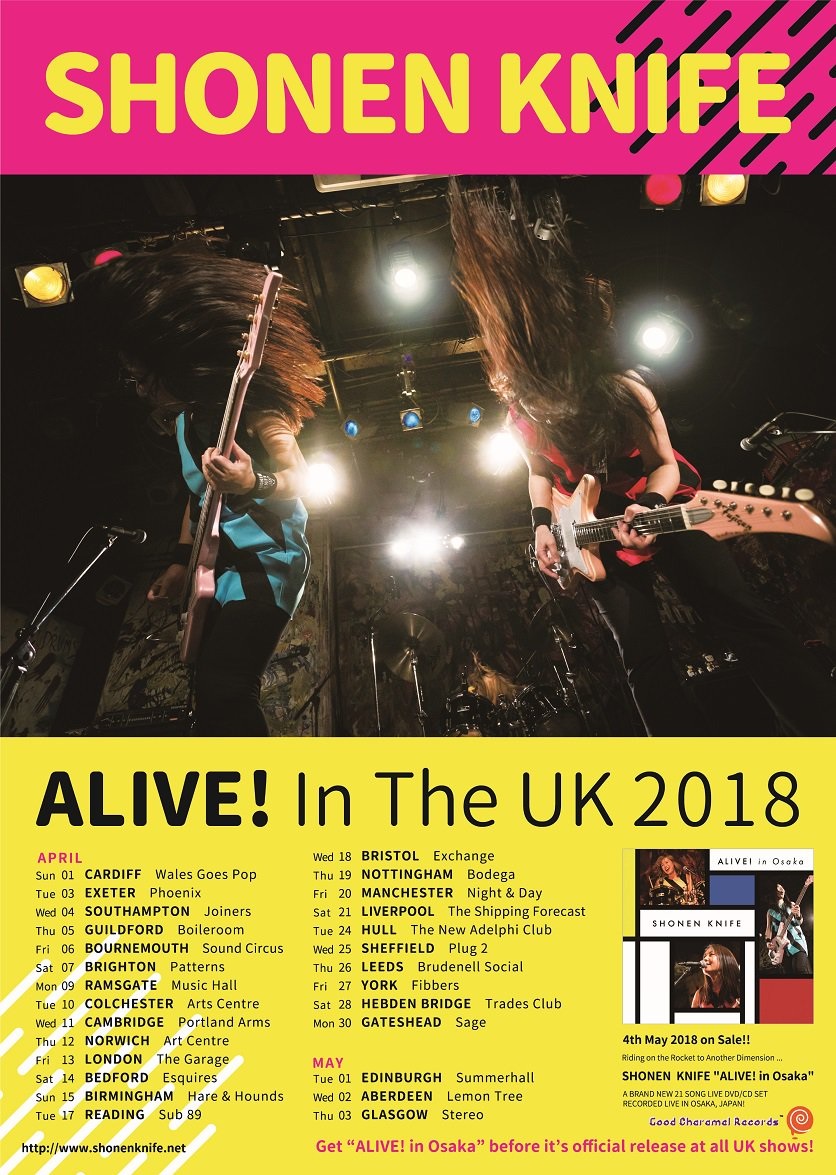 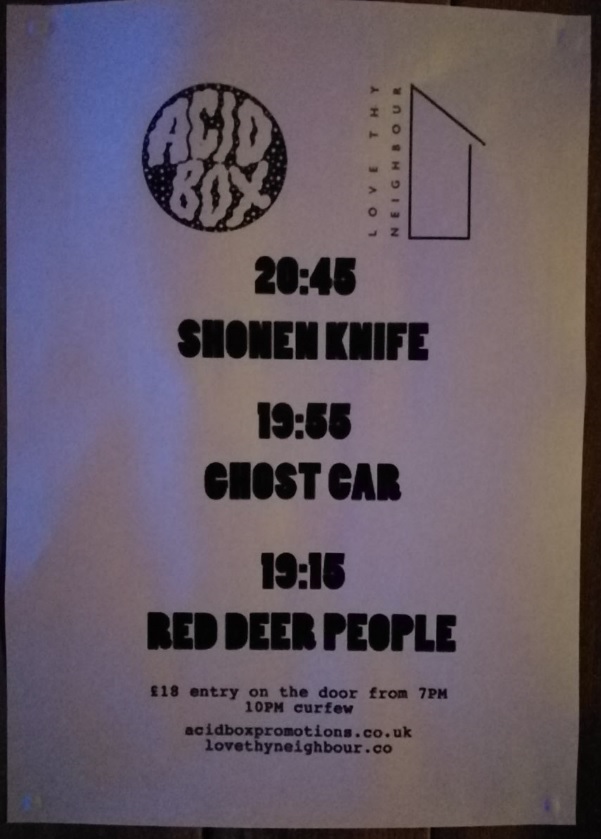