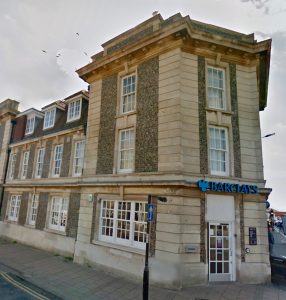 An alert bank worker foiled three bogus builders who tried to con a pensioner out of thousands of pounds.

The doorstep conmen told the pensioner from Peacehaven that they had fixed his gutters and needed paying.

But the fraudsters’ scam was thwarted when the pensioner went his bank branch to withdraw the cash.

Sussex Police praised the way that bank staff dealt with the case, saying: “Police are warning residents to be vigilant after an elderly man was nearly conned out of £3,000 in Peacehaven.

“The victim, a man in his late eighties, was approached by three men at his Peacehaven home on (Wednesday) 4 April, stating they required payment for fixing his guttering, despite the victim not asking for this work.

”The three men, who arrived in a white van with the word Universal on the side, informed the victim they would come back later to collect the money.

“The victim went to the Barclays Bank in Broad Street, Seaford, and staff became suspicious with the withdrawal amount.

“The staff informed police and stopped the transaction.”

PCSO Christopher Marchant said: “I would like to pass on my congratulations to the staff at the bank who took the appropriate action when they spotted that something with this transaction wasn’t quite right.

“Elderly or vulnerable people and their relatives are reminded that they should always treat requests for cash from unknown workmen with deep suspicion.

“Always ask for ID and satisfy yourself that it is genuine before dealing with that person.”