Brighton Phoenix runner Charlie Da’Vall Grice narrowly missed out on a medal in the final of the Gold Coast Commonwealth Games in Australia. 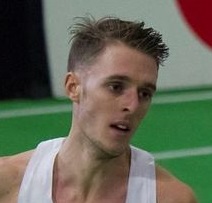 He was beaten by two Kenyans and a Scot, with world champion Elijah Manangoi finishing first in 3 minutes 34.78 seconds.

Fellow Kenyan Timothy Cheruiyot picked up the silver medal in 3:35:17 and Jake Wightman claimed bronze in 3:35:97.

As in the heat, Da’Vall Grice started near the back and worked his way towards the front of the final field of 12.

When the bell went he stepped up the pace but could only cross the line in fourth in 3:37:43, holding off Jinson Johnson, of India.

Wightman stayed frustratingly just ahead of him, with the Scot making up for his own agony in the 800m two days ago when he was 0.22 seconds off a bronze, finishing fourth in 1:45:82.

Another Kenyan, Wycliffe Kinyamal, won the 800m gold in 1:45:11, with England’s Kyle Langford taking silver in a personal best of 1:45:16, half a second ahead of third placed Australian, Luke Mathews. Today Mathews, who led after the first lap in the 1,500m, trailed across the line in 12th.