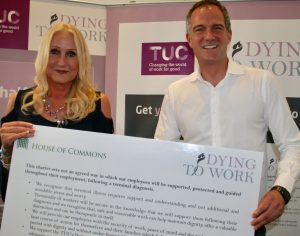 The Dying to Work campaign was set up by the trade union body after the case of Jacci Woodcook, a 58-year-old sales manager from Derbyshire.

She was forced out of her job after having terminal breast cancer diagnosed. The campaign is calling for a change in the law to prevent the same thing happening to other working people.

Mr Kyle said: “Workers should be able to expect support at an incredibly distressing time and I am proud to have signed the TUC’s ‘Dying to Work’ charter to protect my employees.

“I will also be encouraging businesses in Hove and Portslade to follow suit and sign up to the TUC’s voluntary charter.

“In addition, I will be pushing for the government to take action to ensure that every individual with a terminal illness receives the protection and support they deserve.”

Since its inception in April 2016, the charter has been signed by representatives of organisations employing more than half a million people in companies such as Santander, Co-op, Rolls-Royce, Weetabix, Royal Mail and Eon.

A number of public sector bodies including NHS trusts, police forces and many local authorities have also signed up alongside trade unions and charities.

TUC deputy general secretary Paul Nowak said: “Serious illness is tough enough without having to put up with extra hassle at work. Everyone can surely agree that terminally ill workers deserve protection.

“That’s why unions, MPs, employers and charities are coming together to ensure that workers get the support and protections they need when times are toughest.”

Under the Equality Act 2010, employees in Britain cannot be dismissed because of their age, disability, race, pregnancy or maternity, etc. These are known as “protected characteristics” and the TUC proposes adding terminal illness to the list to prevent discrimination and unfair dismissal.

You can read more about the campaign and how to sign your employer up here.

For other articles written by Roz Scott, subscribe to www.rozscott.com.