The biggest school in Brighton and Hove has signed up for a uniform recycling scheme.

Students at Cardinal Newman Catholic School, in The Upper Drive, Hove, are being asked to bring in their old uniforms on the last day of term.

The secondary school has teamed up with Smarter Uniforms, a not-for-profit organisation with outlets at the Open Market and at Fair, in Queen’s Road. Plans are also under way for a shop at Brighton Marina.

Smarter Uniforms said: “Summer has got off to a fantastic start for the Smarter Uniforms team, who have just agreed a new partnership with Cardinal Newman Catholic School in Hove.

“Collection boxes have been delivered and plans have been made for the first ‘donation day’ on the last day of term for pupils to bring in their old uniform.

“Smarter Uniforms then collects, sorts and smartens up the uniforms in order to resell good quality uniforms back to parents at about a third of the price of a new uniform.

“Smarter Uniforms are a non-profit organisation and around 70 per cent of the proceeds of the sale of each item will be returned directly to the school, helping to raise much-needed funds at a time when budgets are under pressure.”

Claire Jarman, head of school, said: “We are delighted to be able to offer this option to parents and we recognise the continuing pressures on family budgets.

“We know our uniform offers excellent quality and we are pleased there will now be a facility to offer uniforms to be worn again.

“We hope that parents will really get behind the initiative through their donations of clothes and recognise this is also a great way to raise funds for the school.”

Smarter Uniforms said: “The average spend on each uniform across the country is over £150 per child which is a large cost for parents especially when they have more than one child.

“As children grow so quickly, many uniforms are still in good enough condition to be worn again.

“Most parents will know it is difficult to access a good second-hand uniform when their child has had a rapid growth spurt.” 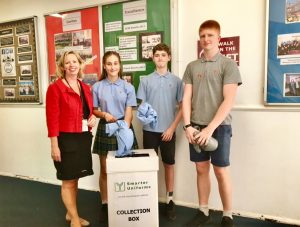 Anne Amner, a parent at Cardinal Newman, thought it was a great idea. She said: “I don’t always have people to pass our uniform on to so this is a fantastic way to put the clothes to good use.

“Also, to know it’s raising money for the school is so important in the current climate. It’s a brilliant scheme.”

The initiative came out of the Brighton and Hove Fair Trade Steering Group.

Smarter Uniforms said that it hated waste and loved giving uniforms good new homes, with 300,000 tonnes (£140 million worth) of clothing still sent to British landfill sites each year – and it wants that to stop.

Anyone wanting to get involved can contact Smarter Uniforms at bhsmarteruniforms@gmail.com or via their website at https://www.bhft.org.uk/smarter-uniforms.