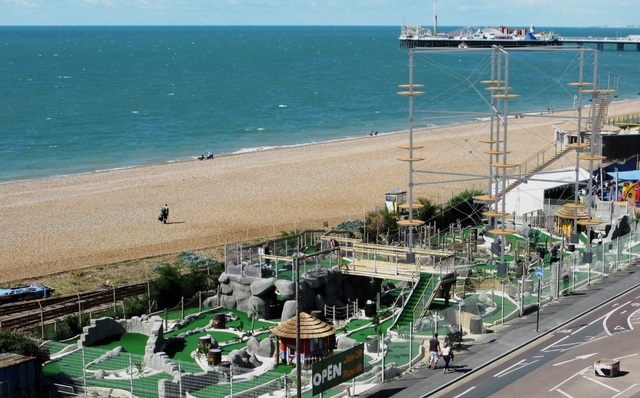 Plans for a 16-metre high rope walk at Peter Pan’s Adventure Golf on Brighton seafront have been approved by planners.

The proposed attraction in Madeira Drive, Brighton, was described as in the style of Go Ape and would tower above the mini golf course, with people playing below while others swing around above them.

It was approved for six years.

There were five letters of objection, with people concerned about the impact on the Georgian houses in the street above, as the structure is higher than Marine Parade.

A further 22 letters of support described it as brilliant for children and great for the economy.

Independent councillor Michael Inkpin-Leissner said: “I find it amazing 16 metres is too high for the seafront when what do we have at the other end?

“I cannot see the point of refusing it.”

Labour councillor Nancy Platts, who represents East Brighton ward, was not over-impressed with the quality of the attraction but appreciated the need to draw visitors to the area east of the Palace Pier.

She said: “I feel conflicted because I do not want to have too much along the seafront but to keep the natural environment.

“As it is for only six years, it is nice to have something else.”