A lifesaving blanket plan in a Brighton hospital has been shortlisted for a national award.

They helped the pensioners, some with dementia, to find their way back to bed more easily, leading to fewer falls on the busy medical ward.

Ms Lee, who runs Jowers Ward in the Barry Building, in Eastern Road, said that the scheme was in the running for the Nursing Times safety award.

Her original idea was aimed at making the ward more homely after she moved there six years ago.

She previously worked in the Accident and Emergency (A&E) Department.

Since offering patients their own choice of blankets, the ward has had significantly fewer patient falls.

Given that frail patients can suffer serious injuries, complications and even death when they have a fall, this has proved an unexpected bonus, she said.

Three years ago ten patients fell. Two years ago the number was down to five.

So far this year only one person has fallen on the ward – in April – and that was the first patient fall since November.

Ms Lee said: “When I arrived, staff morale was low. It was going to be a tough one. 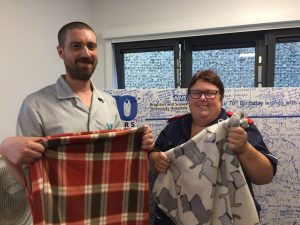 She wrote a report about her blanket idea and found that the number of patient falls came in below the average for Brighton and Sussex University Hospitals, which runs the Royal Sussex, and for the wider NHS.

Her idea is now part of the hospital trust’s Patient First transformation programme.

Ms Lee said: “If we’d had the Patient First improvement system earlier, we would have got on this quicker.

“I thought about my ward and didn’t think about rolling it out to care of the elderly.

“I just wanted to save lives on my ward.

“Now we can do that and make the hospital safer.”

She added: “We are saving lives and saving money.”

The Nursing Times Award winners are due to be announced on Wednesday 31 October.