Brighton and Hove Albion have sold winger Jiri Skalak to Championship side Millwall on undisclosed terms. 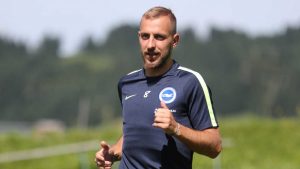 The Czech winger has ended a two-and-a-half year stay with the Seagulls having joined from Mlada Boleslav in February 2016.

Albion manager Chris Hughton said: “Jiri is a great character, and I cannot fault his professionalism or work rate since arriving at the club.

“He has played his part in helping the club win promotion to the Premier League and has been a brilliant player to have in and around the squad.

“We understand his desire to play regular first-team football and wish him all the very best for his future.”

He found the net again away at The Valley in a 3-1 victory over Charlton Athletic as the Seagulls narrowly missed out on automatic promotion to the Premier League that season.

The Czech Republic international made another 33 appearances across all competitions in Albion’s 2016-17 promotion-winning campaign.

But found game time more limited last season, making his final appearance for the club in a 1-0 victory away at Middlesbrough in January.