A bystander needed hospital treatment for serious facial injuries after a fight at a Brighton burger bar. 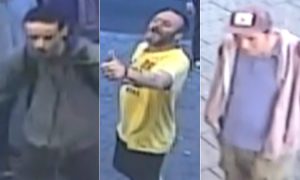 Sussex Police said: “Detectives investigating an assault which happened outside Burger King in North Street, Brighton, would like to talk to these three men.

“The 25-year-old victim suffered fractures and a laceration to his face after he was hit following a fight which occurred outside Burger King and then spilled inside the restaurant at about 4.45am on Sunday 8 July.

“He was taken to hospital and underwent treatment for his injuries.

Detective Constable Aaron Halsey said: “We would like to speak to the three men pictured in the CCTV image.

“The victim was not directly involved in the fight and ended up with some serious facial injuries.

“We would like to hear from anyone who recognises these men or has any information to contact us.”

Anyone with information is asked to contact Sussex Police online or phone 101, quoting serial 352 of 08/07.