Hove beekeeper – and Conservative councillor – Robert Nemeth is due to appear in the final episode of the BBC TV series Nadiya’s Family Favourites this evening (Monday 10 September). 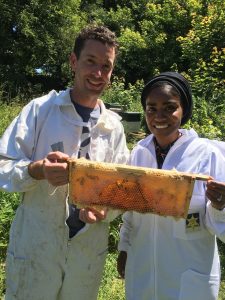 Mrs Hussain tasted honey straight from the hive during filming in Hassocks where Councillor Nemeth keeps his bees.

And she came to Hove afterwards to try honey in recipes prepared at the home of Jane Keehan, who runs Franklin’s Antiques, in Portslade.

Councillor Nemeth said: “Nadiya is just as nice in real life as she comes across on television.

“She told me how much her son loved bees and she was surprisingly calm when seeing them up close.

“Most people are pretty nervous when inspecting a hive for the first time.

“She enjoyed tasting the fresh honey and playing around in Jane’s kitchen.

“It was a fun day for all but every scene took surprisingly long to film. Six minutes of footage took six hours to film. 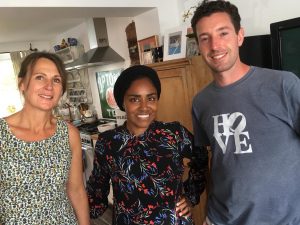 “It’s all good news for local beekeepers though.”

The programme is due to be aired at 8pm this evening.

Children with autism missing out on education, says Brighton MP