Sainsbury’s is challenging Tesco in Church Road, Hove, after buying the premises formerly used by a café and the neighbouring shop. 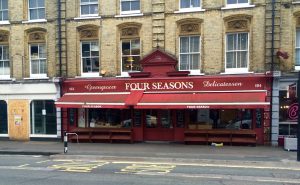 The supermarket group is moving into the old Raise bakery and café premises and the site of the recently closed Four Seasons store next door, previously Cullens.

The move comes 27 years after Sainsbury’s vacated its old Blatchington Road shop in October 1991 after a quarter of a century’s trading there.

The closure came a year before Sainsbury’s opened its West Hove branch, by the link road, off Old Shoreham Road, in October 1992.

At about the same time, Tesco closed its George Street branch as the main supermarket groups focused on bigger stores based at out-of-town or edge-of-town sites.

Having both shut premises in Churchill Square, Brighton, with Tesco quitting in the 1990s, the supermarket groups have since rediscovered the merits of what are now known as “metro”, “express” or “local” stores.

Tesco has since returned to the centre of Hove with its Church Road store and the two groups have since gone head to head in places such as Western Road, Hove, and St James’s Street, Brighton.

Now Sainsbury’s is preparing to turn the two former Church Road premises into one before opening a new front in the supermarket store wars at a date yet to be announced.