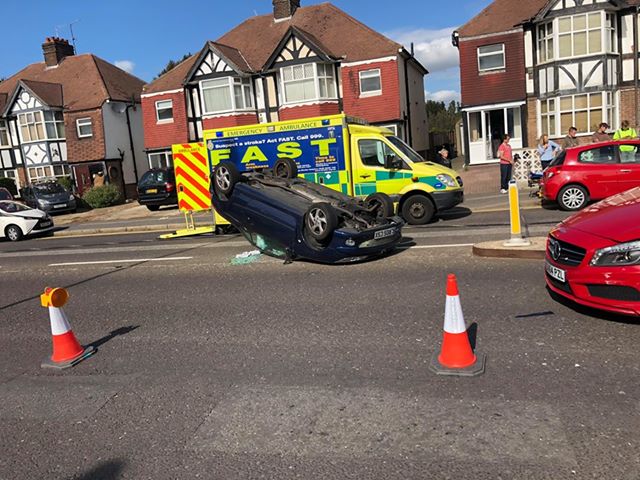 A car has flipped onto its roof on the Old Shoreham Road in Hove following a three-vehicle crash this afternoon.

Emergency services are on the scene, and paramedics treated a woman in her 50s for chest injuries before taking her to the Royal Sussex.

Police closed the road at the junction with Sackville Road.

“One car is reported to be on its roof and emergency services are currently on scene.

“The road has been closed at the junction with Sackville Road.”

A spokesman for South East Coast Ambulance Service said: “At 12.58pm we responded with an ambulance to a road traffic collision, where a car rolled over, on the Old Shoreham Road, Hove.

“A woman in her 50s was taken to the Royal Sussex Hospital in Brighton with chest injuries.”

A spokeswoman for East Sussex Fire and Rescue said: “Firefighters attended a three-vehicle collision along the Old Shoreham Road, in Hove, at 1.02pm and assisted with making the scene safe.

“No-one was trapped and one casualty was left in the hands of paramedics.”

⚠️ Please be advised that due to an accident on Old Shoreham Road #BH5 and #BH5A services are using the #BH5B route between Hove Park Tavern and the Grenadier. #BH5As will still be calling into Hove Polyclinic – Thank you ⚠️