More plastic recycling and food waste collections may be coming to Brighton and Hove.

Councillors welcomed a petition signed by 3,161 people, organised by Hanover resident Tea Meneghetti and calling for Brighton and Hove City Council to recycle a wider range of plastics as well as food waste.

Miss Meneghetti and fellow petition organiser Alizée Staes presented the petition to a meeting of the full council at Hove Town Hall on Thursday (18 October).

They said that the council had a poor track record, ranking 326th out of 353 councils in the country.

Miss Meneghetti said: “There is poor management of the system. What we want to be doing is encouraging (the collection of) a wider range of plastics.”

Miss Staes said that food composting was limited because people could do it only at home or as part of a community scheme.

She said: “There are problems with awareness. Lots of people want to recycle but do not know how to do it.

“The council should be responding to educate people.”

Councillor Gill Mitchell, who chairs the council’s Environment, Transport and Sustainability Committee, said that a national recycling system was needed.

She said that recycling plants were more selective about what they would take and that, for example, Basingstoke Borough Council had stopped its mixed recycling collections. 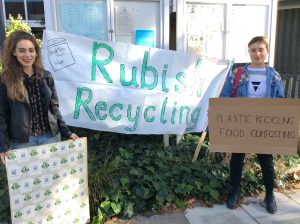 Councillor Mitchell said: “With regard to plastics, much of which cannot be easily reprocessed, we would like to see the production of that plastic stopped.

“Only essential plastics should be made that can be processed.”

It may be possible for the council’s waste and recycling contractor Veolia to screen out plastics but Councillor Mitchell pointed out there also needed to be a market for them.

She said: “We desperately need a nationally co-ordinated recycling system, common to all areas, with investment in local processing facilities.

Green councillor Leo Littman asked for “constructive and costed investigations” into what the petitioners were seeking. This was agreed by the council.

He said: “We ask for officers to look for sources of funding to drag Brighton up the league tables for recycling from its sadly low position.

“This is not going above and beyond what ordinary people should expect from their local authority.”

Councillor Littman said that under the previous Green administration efforts were made to start a food recycling service.

But now, he said, 30 per cent of the waste sent for incineration at Newhaven was food, which he described as “obscene”.

Conservative councillor Lee Wares said that everyone had to do their part to reduce the amount of plastic waste.

He said: “It is right to change where we can and what we do. We support the petition.

“One thing I am certain of whatever we might change – the frequency and type of recycling and food waste collections – we will not support reducing the amount of refuse collections.

“We must continue to collect weekly.”

The investigation will include researching extra sources of money from the government, local enterprise partnership and other organisations.

The petition was referred to the next Environment, Transport and Sustainability Committee meeting on Tuesday 27 November along with the request for a report investigating how the council can improve the range of plastics collected, set up a food waste collection and improve education.