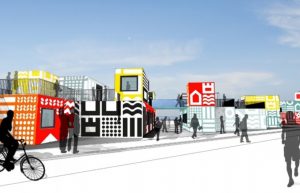 Councillors raised concerns about the design of the buildings, the bright colour scheme and the whole project’s impact on the area’s heritage and ecology.

Plans for the Sea Lanes pool, on the derelict Peter Pan’s Playground site, were thrown out by Brighton and Hove City Council’s Planning Committee.

Members voted seven to four against the scheme in a meeting at Hove Town Hall.

The pool was described as a sporting facility to help people train for triathlons and open water swimming rather than a family pool.

This gave rise to a key concern that the pool would cater for only seven swimmers an hour.

Conservative councillor Lynda Hyde said: “This application is all about developing retail and office space on our seafront, with a swimming pool thrown in to entice the council.

“The swimming pool was originally 50 metres and it has shrunk before touching any water.”

People and organisations opposing to the scheme objected to the yellow, turquoise and red PVC-wrapped modular buildings and said that they were out of keeping with the nearby Kingscliffe Conservation area.

Councillors were shown images of railings, statues and bouys from around the area, providing inspiration for the wraps.

Green councillor Phélim Mac Cafferty, a former chairman of the Planning Committee, said that the proposed colours and materials were not just out of keeping but went against the advice of official planning experts.

He cited Historic England’s comments, saying that he had never seen the organisation speak so strongly against a project.

Historic England urged caution on the temporary nature of the scheme so close to the grade II listed Madeira Terraces. 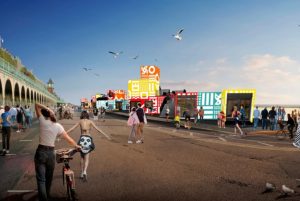 Green councillor Leo Littman said: “The idea of destroying a permanent habitat to put up a temporary pool is ludicrous.

“Part of our job is as custodians of the city and this runs roughshod over that.

“I am more concerned about putting a pool south of the Volk’s Railway on the shingle becoming a fait accompli come 2025.”

East Brighton Labour councillor Warren Morgan, the former leader of the council, spoke in favour of the scheme which is in his ward.

He said: “It is really important that we look at bringing activity to the area.

“It is probably not the scheme I want but on balance it is better to do than not.”