Plans for a new doctor’s surgery building in Brighton were put on show for patients and visitors.

St Peter’s and North Laine medical centres merged at the end of November, with all doctors working out of the Oxford Street surgery in Brighton.

If the new surgery is given planning permission, it would be built in two stages, with the first stage on the neighbouring car park.

Once this is complete the current building would be demolished and the second stage built in its place.

Dozens of visitors saw how the new building would include 16 consultation rooms as well as psace set aside for interviews, meetings and training.

For the past six months the trust has offered secondary mental health services from the surgery two and a half days a week.

Dr Rumboll said: “We are brimming with ideas but are squeezed for space.

“There are lots of exciting options to have on-site benefit advice for the homeless (and) mental health support workers.

“There’s also a group room on the ground floor to offer support for people suffering with loneliness or post-traumatic stress disorder.” 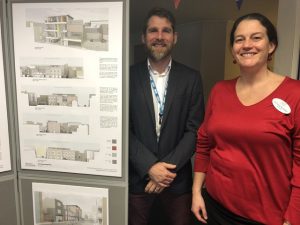 She would also like to host patient support groups and sessions for patients with diabetes.

He said: “Together we are developing new ways of working collaboratively.

“For people going forward the next development is making empowered choices for what suits them.

“We’re pleased with the way rooms are integrated as people need support and this helps break down the stigma around mental health.”

The plans are currently at the consultation stage before being submitted to Brighton and Hove City Council.

The surgery team is waiting to hear whether it has secured £1.24million funding from the NHS Estates and Technology Transformation Fund.

Leave a Reply to Harold A Maio Cancel reply