A Brighton man has been jailed for 25 years for sex offences against young girls dating from 1971 through to the late 1990s. 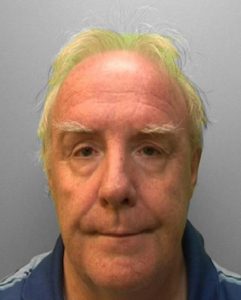 He was convicted of 22 offences yesterday after an eight-day trial.

Cousins preyed on five girls aged from seven to 16 having got to know them in the Brighton area over almost 30 years.

He was also sentenced for six other offences of having indecent images of children which were found on his home computer and hard drives when he was arrested.

He pleaded guilty to six counts of making and having the indecent images at Brighton Magistrates’ Court in April this year.

Sussex Police said: “All the images were taken from the internet and none involved images of local children or children known to him.”

Judge Tain said: “You constitute a significant risk to members of the public. This sentencing reflects your dreadful attacks on little girls. The whole of your evidence was a pack of lies.”

Detective Constable Stewart Cameron, of the Brighton Safeguarding and Investigation Unit, said: “This investigation began in 2014 after one of Cousins’ victims spoke to us. We then traced four further victims who disclosed the worst offences.

“Throughout the investigation he has shown no remorse and refused to accept that he has ruined lives.

“The victims have shown immense bravery and fortitude, with our support, and gave clear accounts of the abuse they suffered at his hands.

“Today justice has been done.”