The Coathangers release new album and are returning to Brighton 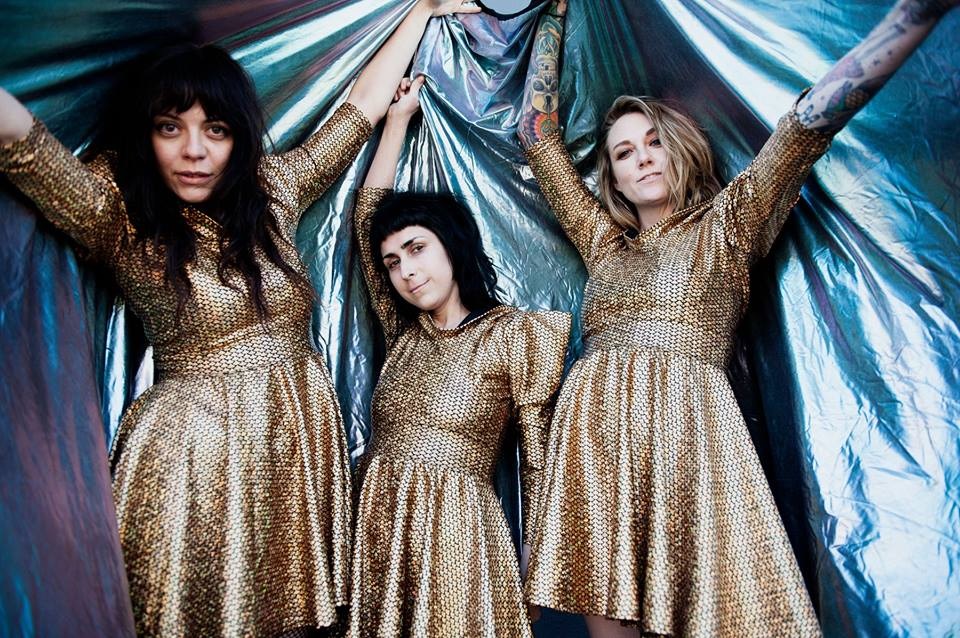 The Coathangers are set to return to Brighton

Last October the Brighton & Hove News Music Team went on a punk rock weekend tour and one of the fab bands that we witnessed performing live was the US all-girl trio The Coathangers. They played a storming set at the ill fated Sticky Mike’s (read our review HERE) and now they have announced that they are to return to Brighton in order to promote their brand new album.

From calling out US gun legislation on ‘F The NRA’ to addressing addiction on recent single ‘Step Back’, The Coathangers’ new album ‘The Devil You Know‘ leaves no room to doubt that they’re one of the most vital and truth-seeking punk bands around. Released yesterday on Suicide Squeeze, they celebrate the record by announcing a return to the UK and mainland Europe, kicking off at the end of next month. 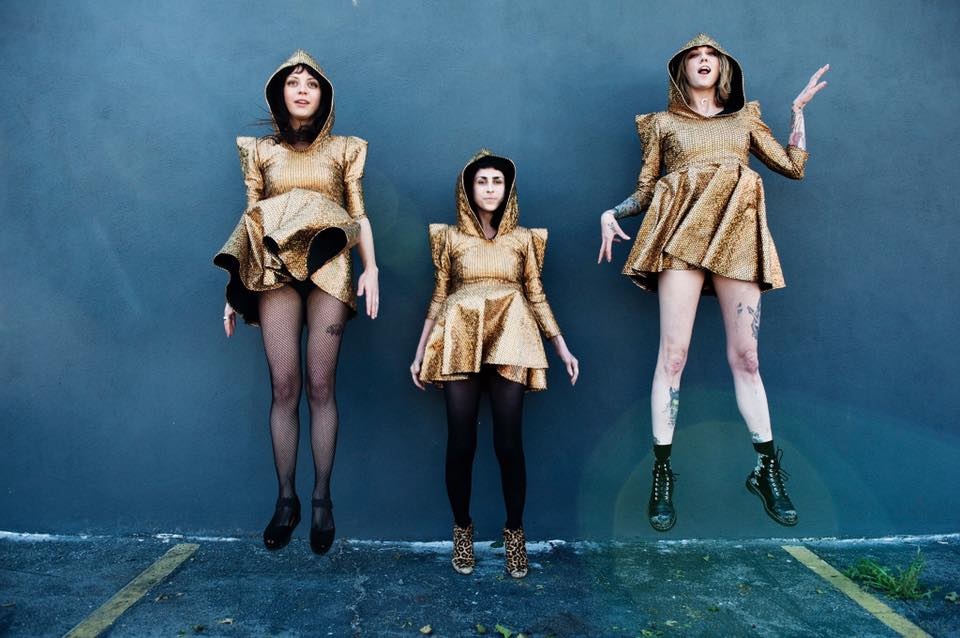 The Coathangers are overjoyed to be coming to Brighton 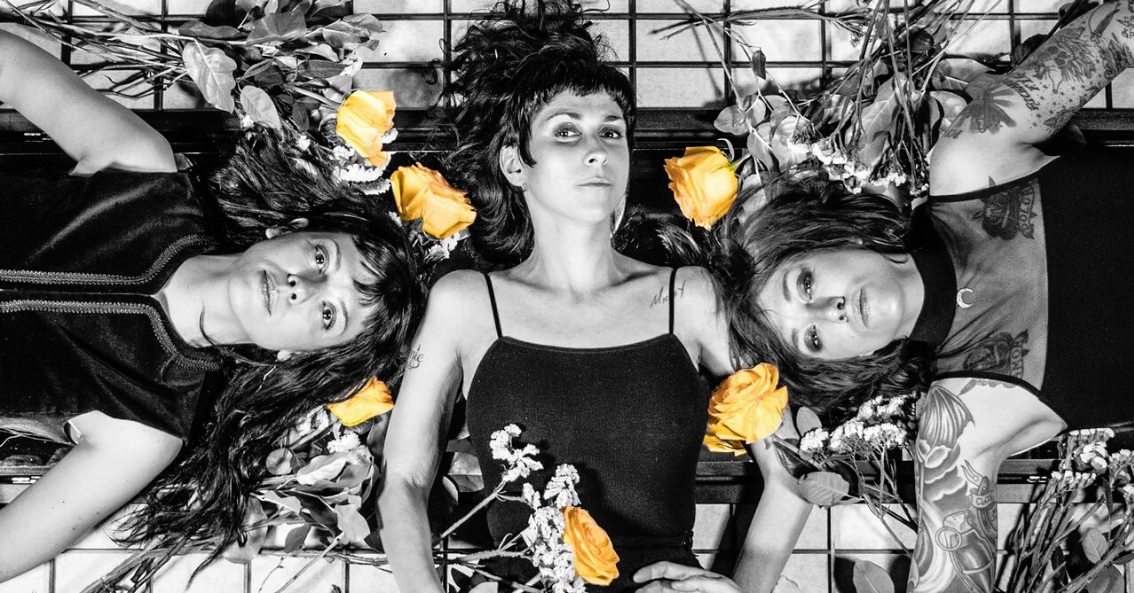 “The writing process was done with an open heart,” says Kugel of The Coathangers’ new album ‘The Devil You Know’. “Everything that came before had to go away. Whatever hang-up, whatever thing we were holding onto, it had to go away. And we started there, at ground zero.”

The album title stems from an old adage whispered at a friend’s wedding; we settle when we’re afraid of the unknown. It’s a theme that runs through every song on the album, and even though the band insists they were writing songs about other people’s’ pain, they acknowledge that the old saying applies to their band as well. We get comfortable, we get scared, and we refuse to change. But with ‘The Devil You Know’, The Coathangers lost their fear, and that allowed them to shed the baggage of the past. “Why are we living in these cells we built for ourselves?” Kugel asks. “That’s been the great thing about this record. It’s been honest and confrontational… but not in a shitty way.” 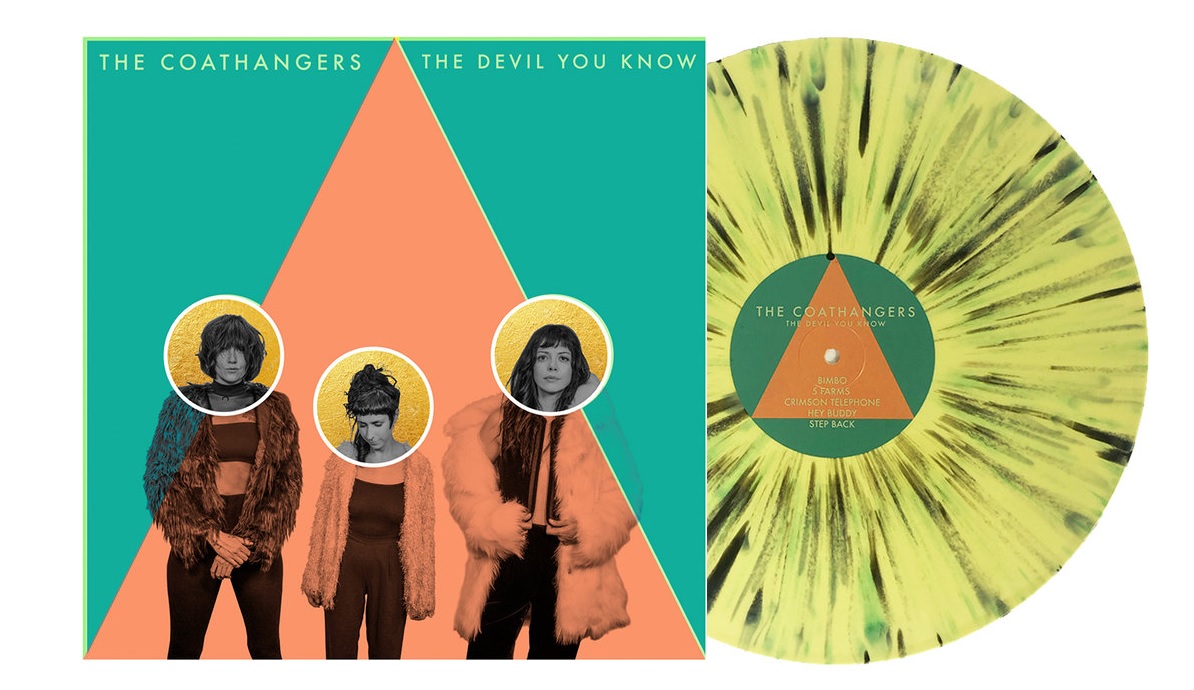 The Coathangers Mayday vinyl version of ‘The Devil You Know’ (all sold I’m afraid!)

Listen to ‘The Devil You Know’ in full HERE. 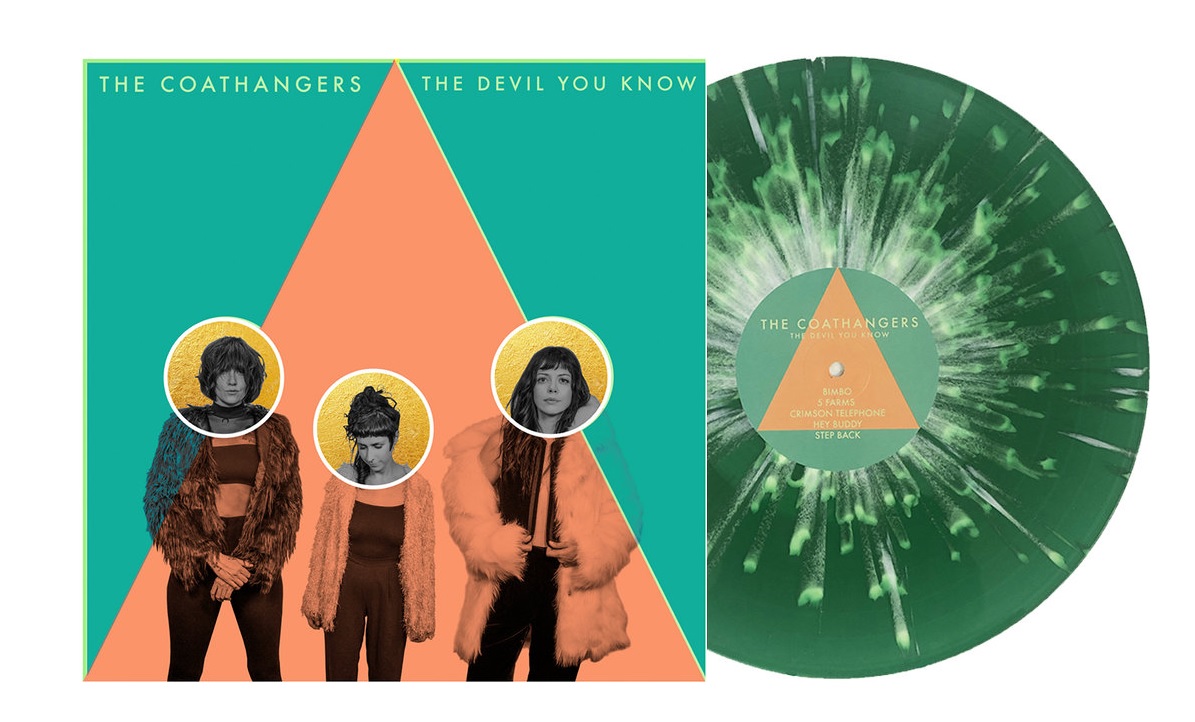 The Coathangers Bittersweet green vinyl version of ‘The Devil You Know’

In their fourteen years of existence, Atlanta’s tireless garage punks The Coathangers have cranked out five full-lengths and well over a dozen singles, splits, and EPs. Considering the band’s initial aspirations to merely hang out and play a few house parties, their relentless touring schedule is perhaps the greatest testament to the lasting power of their scrappy hook-laden records and the infectious energy radiating from their live shows. And while every Coathangers record has captured their buoyant turbulence and jagged euphoria, there is always some degree of magic that inevitably gets lost when bands go into the studio. 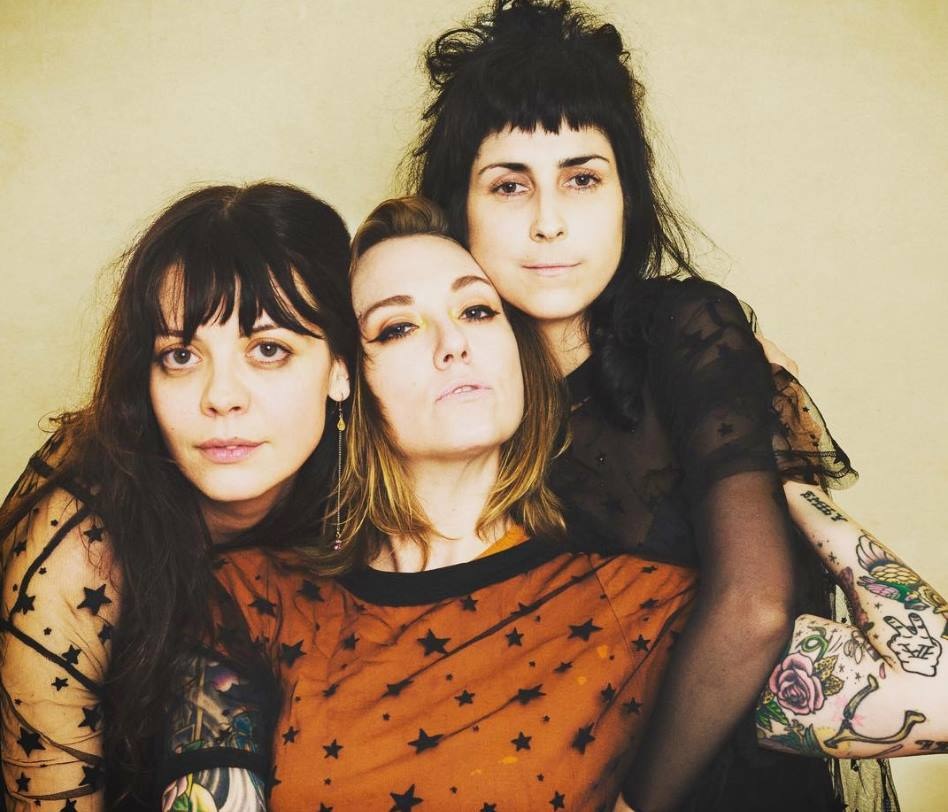 Perhaps it’s the energy transference from the audience that’s missing or maybe it’s the push-and-pull of the musicians playing together in a volatile environment. Whatever the source of that inexplicable magic, The Coathangers have always wrangled a rowdy replication of that sweaty and sticky live feeling, but the time had come to properly document it.

Suicide Squeeze Records is proud to release ‘The Devil You Know’ on CD, a limited run of 300 cassettes, digital formats, and an initial pressing of 3,000 LPs with 500 copies on MAYDAY colour vinyl (sold out), 500 on LUCKY DEVIL colour vinyl, and 2000 on BITTERSWEET colour vinyl. The vinyl version includes foil on the cover of the LP jacket, a printed inner sleeve, and a download card.
‘The Devil You Know’ tracklist:
1. Bimbo (YouTube)
2. 5 Farms
3. Crimson Telephone
4. Hey Buddy
5. Step Back (YouTube)
6. Stranger Danger
7. F the NRA (YouTube)
8. Memories
9. Last Call
10. Stasher
11. Lithium

“The Coathangers have crafted their best record yet.” – Uncut
“A good example of how timely and relevant punk rock can still be.” – LA Weekly
“A gentle appeal rather than an angry yell, offering love and clarity over judgement” – Noisey. 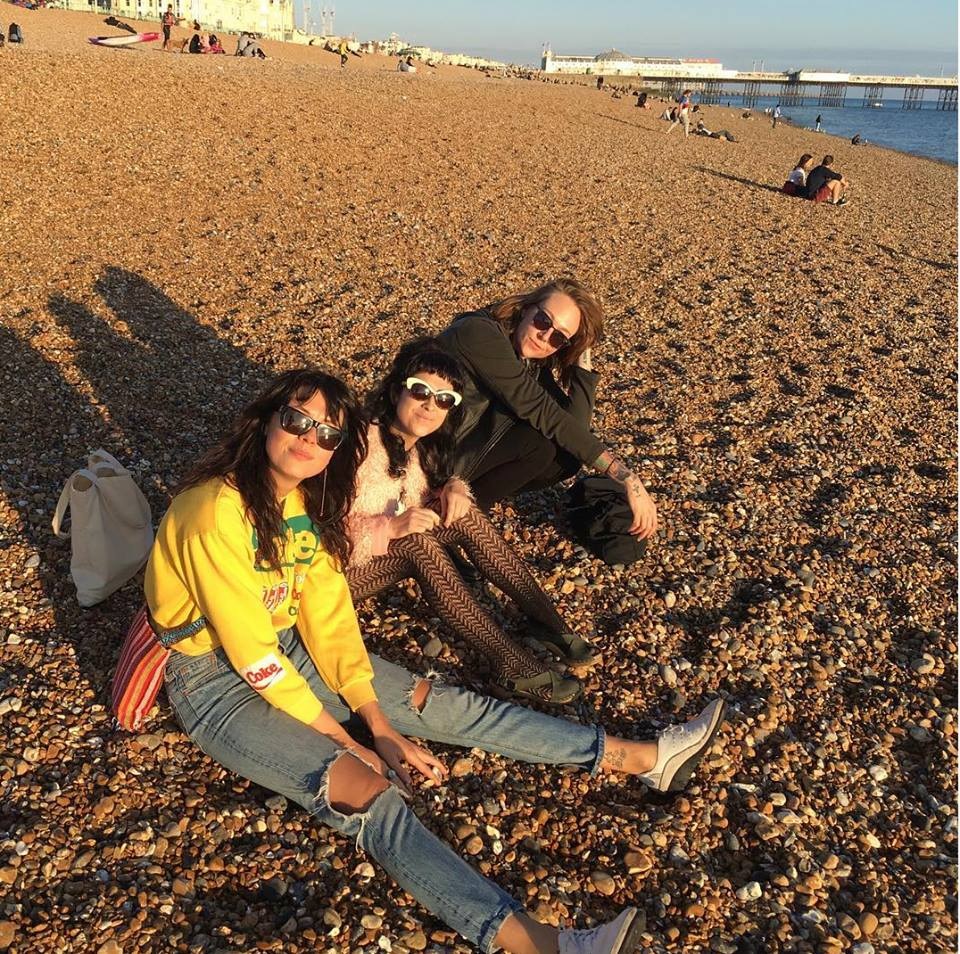 The Coathangers chillin’ out on a certain well known beach! (pic MacKenzie Sutch)