A teenage boy has been taken to hospital after an accident on a ride at the Palace Pier in Brighton this afternoon (Monday 8 April). 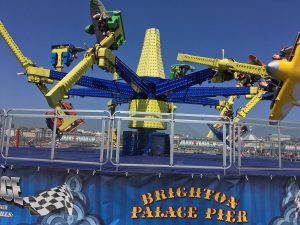 The accident happened at about 3pm when a piece came loose on a ride called Air Race.

Ambulance crews and firefighters from Roedean were sent to the scene.

“A male teenager has been taken to hospital with a leg injury. Others were shaken but uninjured. We are now clear from the scene.”

East Sussex Fire and Rescue Service said: “We were called at 3.06pm to assist Secamb who treated one man at the scene.”

The Health and Safety Executive (HSE) said: “The HSE is aware and we are investigating the incident.”

Pier boss Anne Ackord said: “An incident occurred today when part of one of our rides (Air Race) became detached during the ride cycle and a passer by was hit by the part of the ride.

“We believe that he is not seriously hurt and has been taken to hospital to ascertain any injury.

“The ride has not experienced any issues before and we have been in immediate contact with the manufacturer to ask them to send a team of engineers to investigate.

“We take the safety of our customers extremely seriously and will co-operate fully with any investigation.”