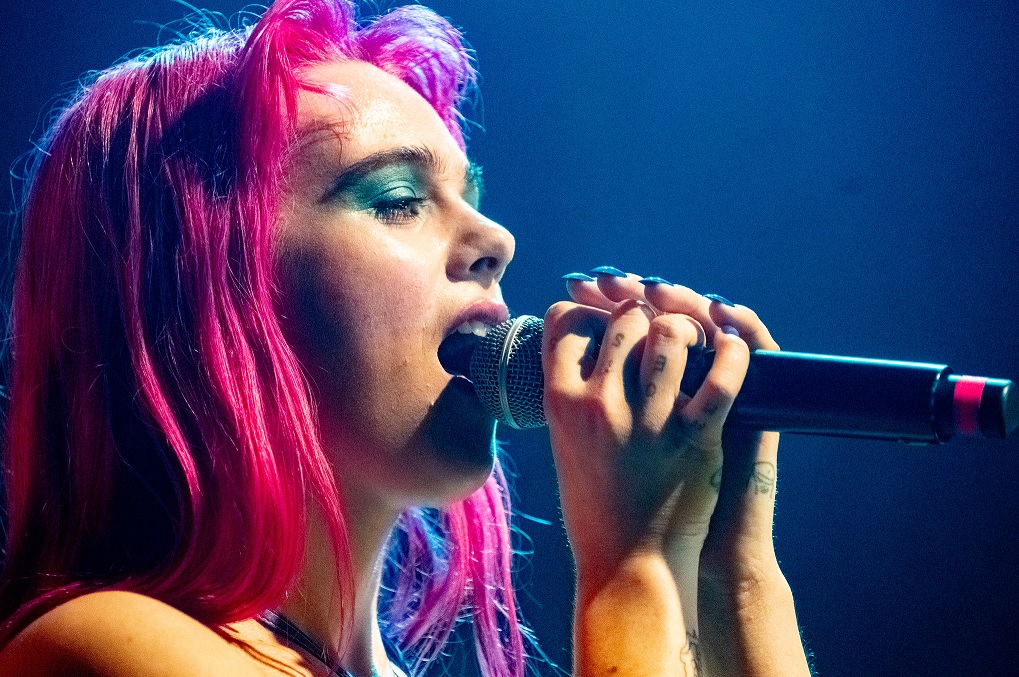 OK OK OK I admit it, GIRLI is my guilty pleasure! I first became aware of GIRLI prior to her 2016 appearance at The Great Escape when she released her debut single ‘So You Think You Can F**k With Me Do Ya’, which was absolutely stunning. She immediately went onto my hitlist when attending The Great Escape and boy she didn’t disappoint, when we saw her perform at Horatio’s on Brighton Pier. I’ve been a fan ever since and seen her live a few times and she has never failed to deliver the goods. 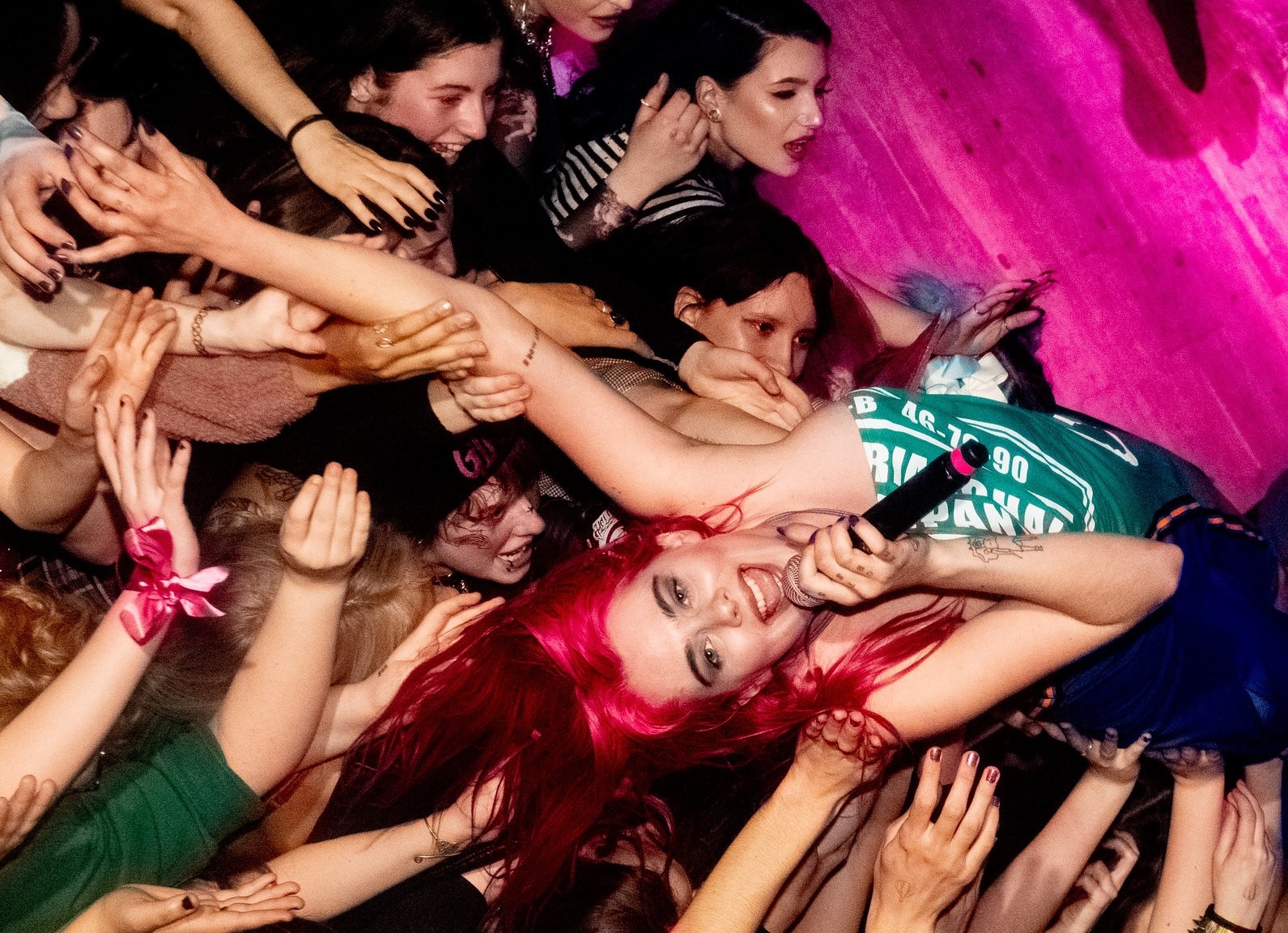 GIRLI is no stranger to The Haunt having played there on 15th November 2017 (read our review HERE) when she performed eleven songs, whereas tonight we were rewarded with fourteen – more on that later. 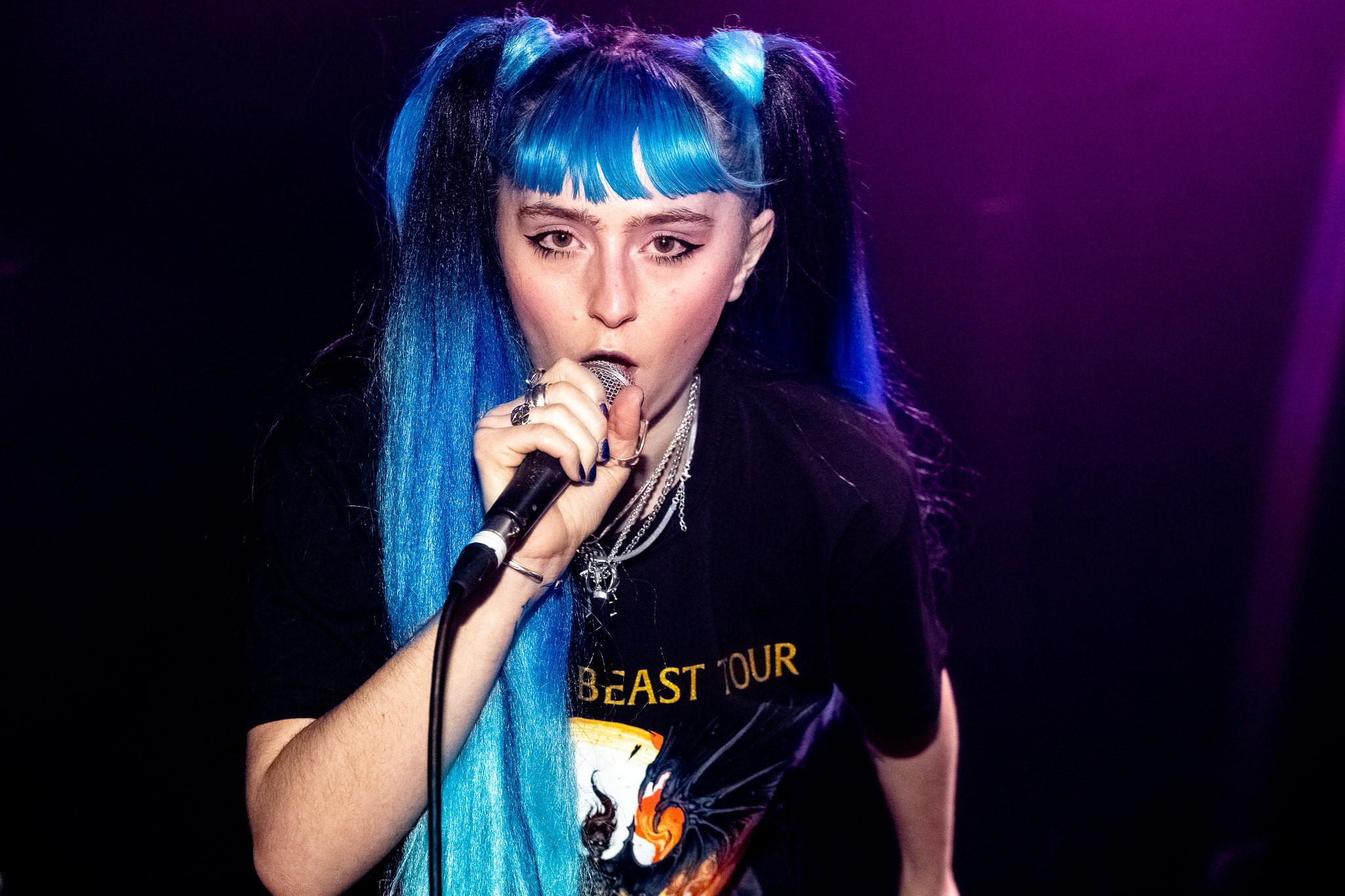 Support this evening came from American born Ashnikko, (aka Ashton Casey) who I note has been hanging around with GIRLI for a couple of years, having remixed the GIRLI track ‘Not That Girl’. It’s not surprising they they have both gone out on tour together as they are very much in the same mould of confident, intelligent, outspoken young ladies with attitude with a fantasy/sci-fi/hentai thing going on, who are both flying the flag for female empowerment. 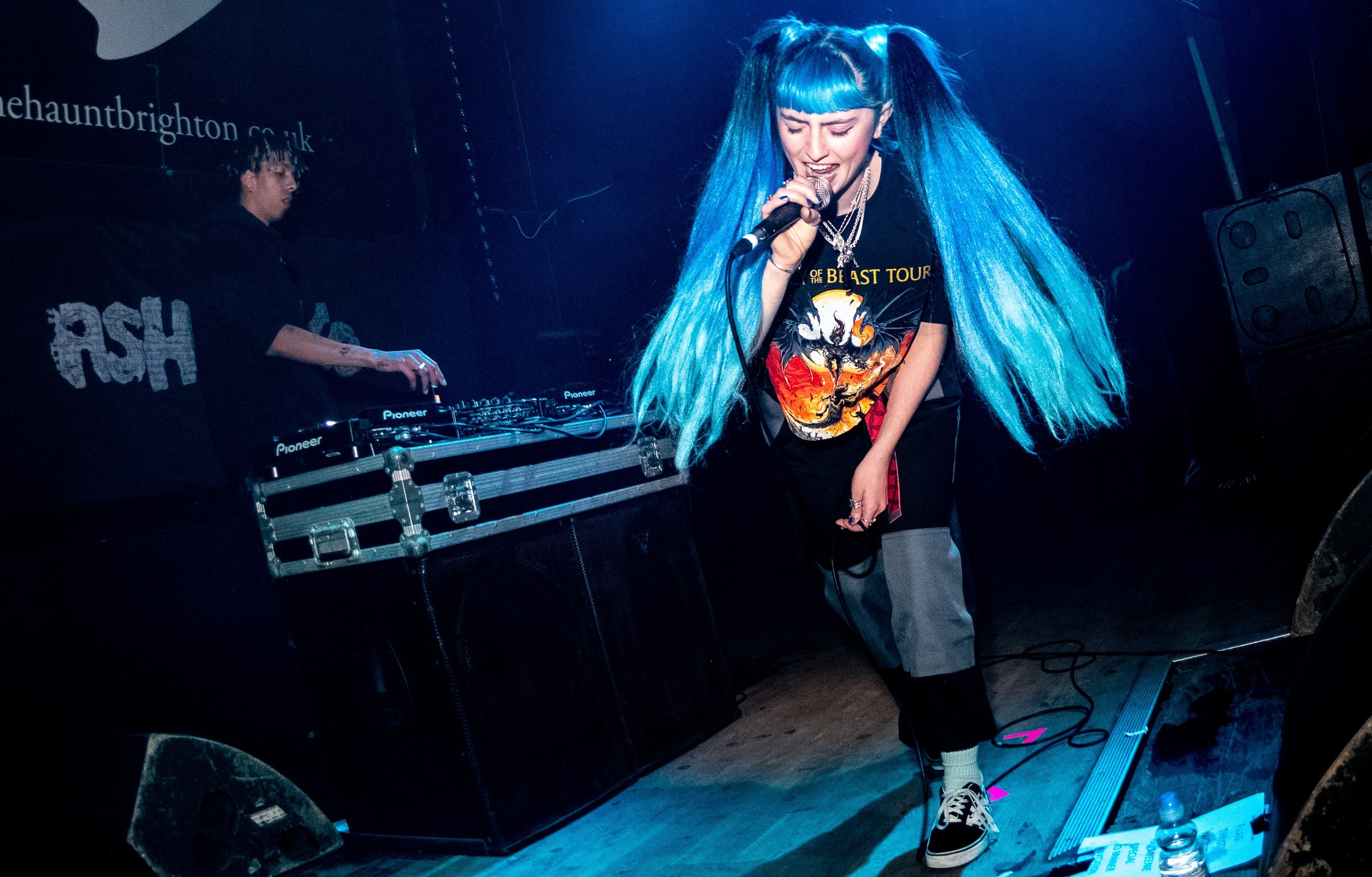 With GIRLI going for the striking pink look, Ashnikko has gone for the blue look, (which was formerly green), with both personas being very in your face. 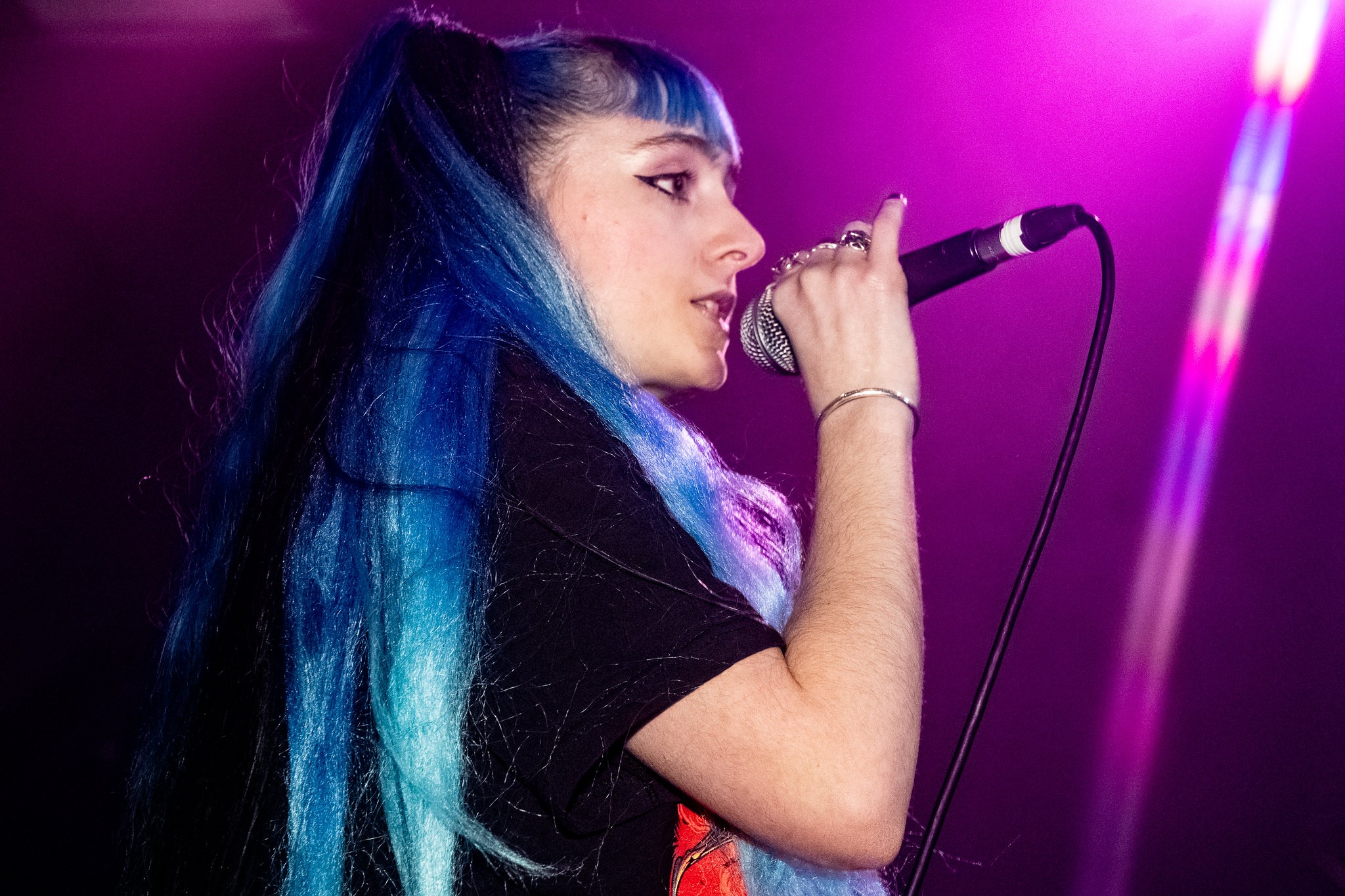 Ashnikko, who has been writing songs since she was fifteen, has now established her home in London (when she was 18) after previously flying there at weekends from Latvia where her family had relocated. Prior to that, in her early teens she was in Estonia, having moved there from North Carolina. So this is one well travelled young lady, who has absorbed things as she has gone along. 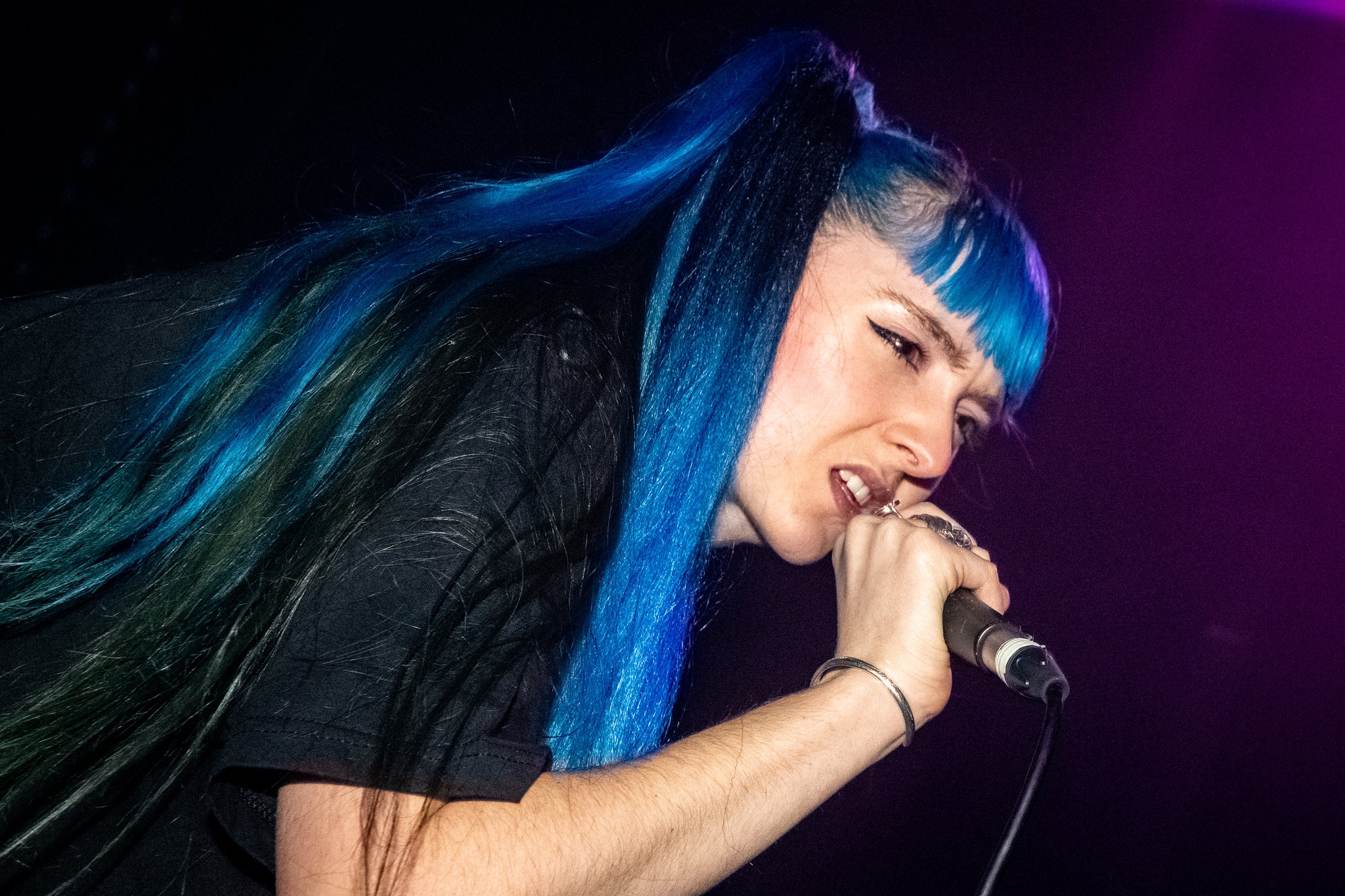 With all the moving around, she has at times felt isolated and she sought comfort in listening and creating her own hip-hop music. Her music was for her solace and if other people enjoyed it and sung along with it and danced around to it then fab! You can liken Ashnikko to a role model for the early-mid teenie generation, with knowingly or otherwise inspiration from M.I.A (as in ‘Paper Planes’) and Björk. 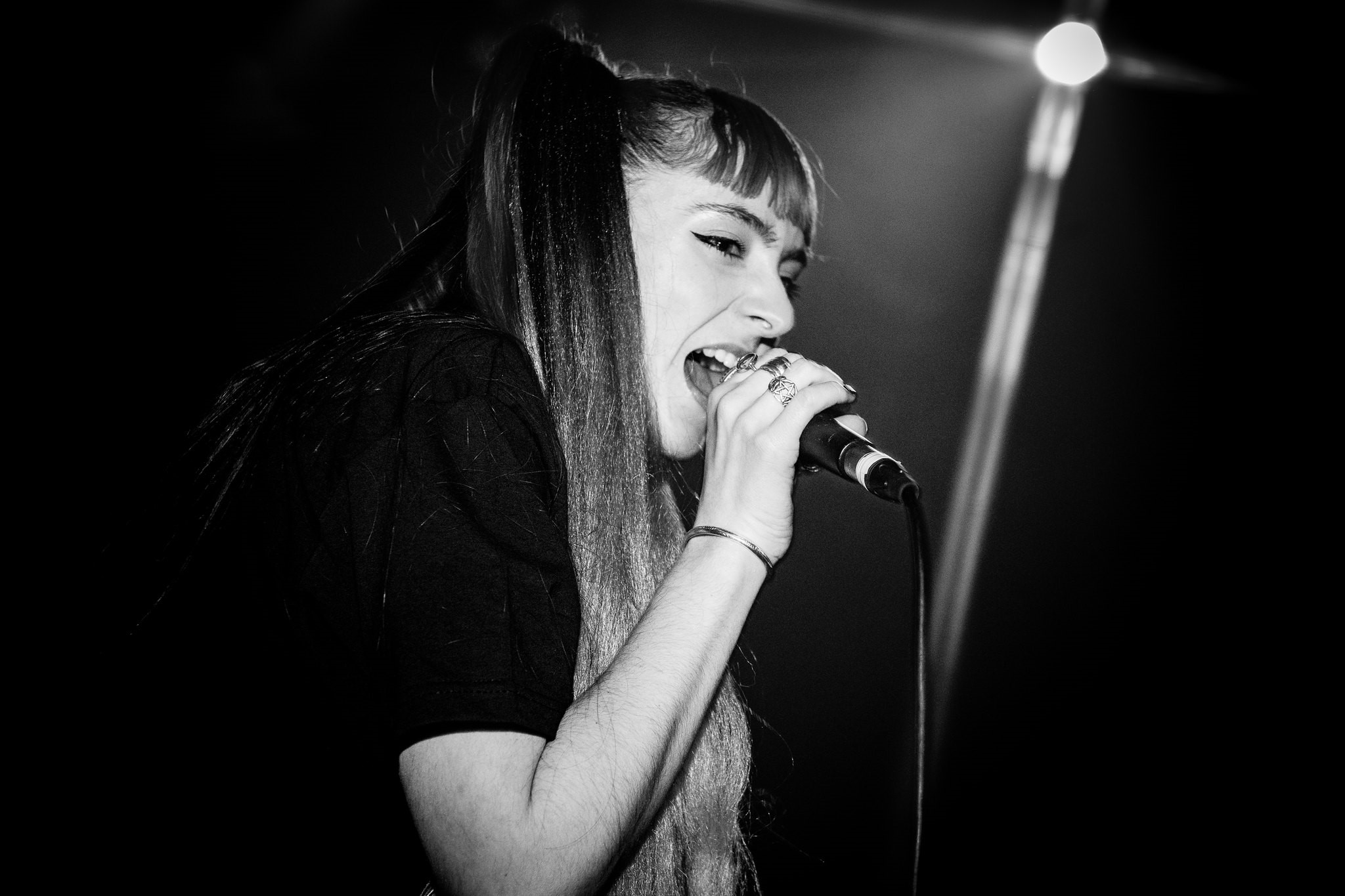 Tonight at The Haunt, we were treated to a half hour uplifting heavy bass hip-hop set from Ashnikko, with tunes from her recent releases including the last 4-track EP entitled ‘Unlikeable’, with the pick of those being the set closer ‘Invitation’. She also performed her next single which will be out on 26th April. 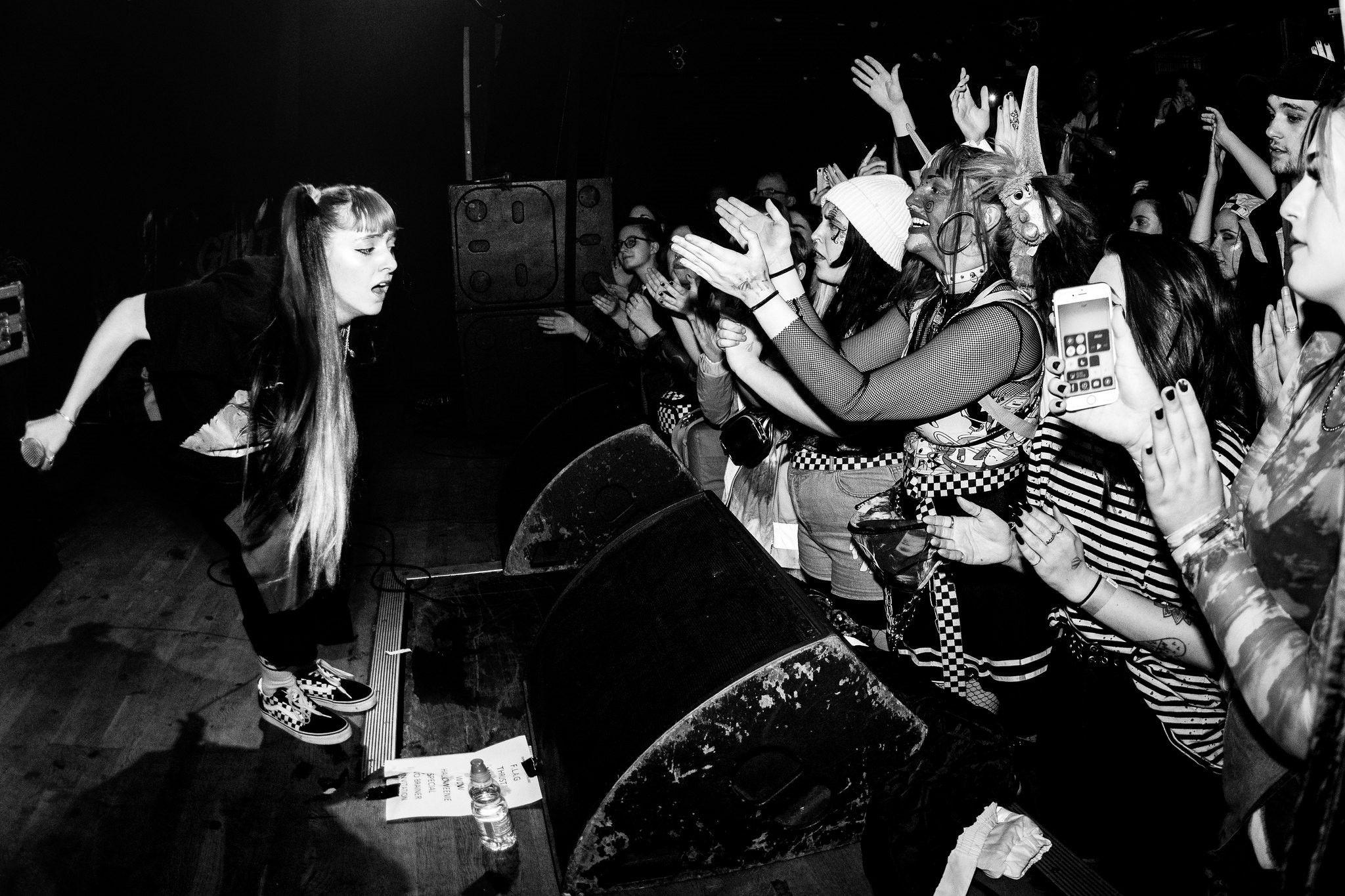 It’s my first taste of Ashnikko and she was accompanied by a cool looking dude behind her on the decks. She was rather buoyant to say the least and kindly shared with us that she was happy as she had just started her period, and then began elaborating about female menstruation. The screaming young ladies at the front of the crowd showed their affinity with her. Ashnikko said that she had written a cover of a Post Malone track because (for want of better words) that she wished to get it on with him and that was her way of getting his attention. 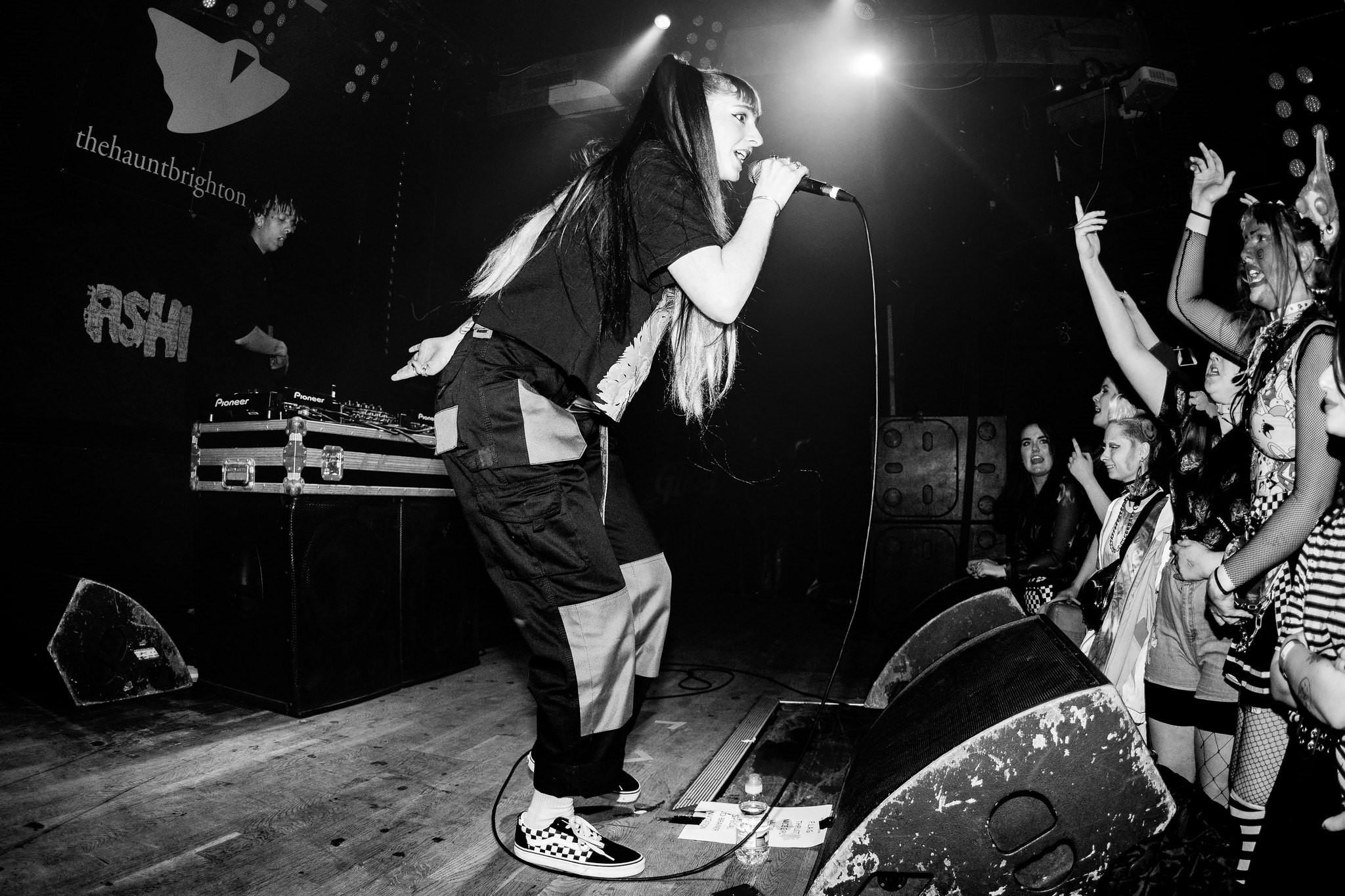 Basically, she was going down a storm tonight and had a majority of the crowd jumping up and down with her with some also singing along. Although her style musically differs from that of GIRLI, I would suggest that Ashnikko was the perfect warm up act for her as the crowd were delivered right where they needed to be for the start of GIRLI’S 55 minute set. 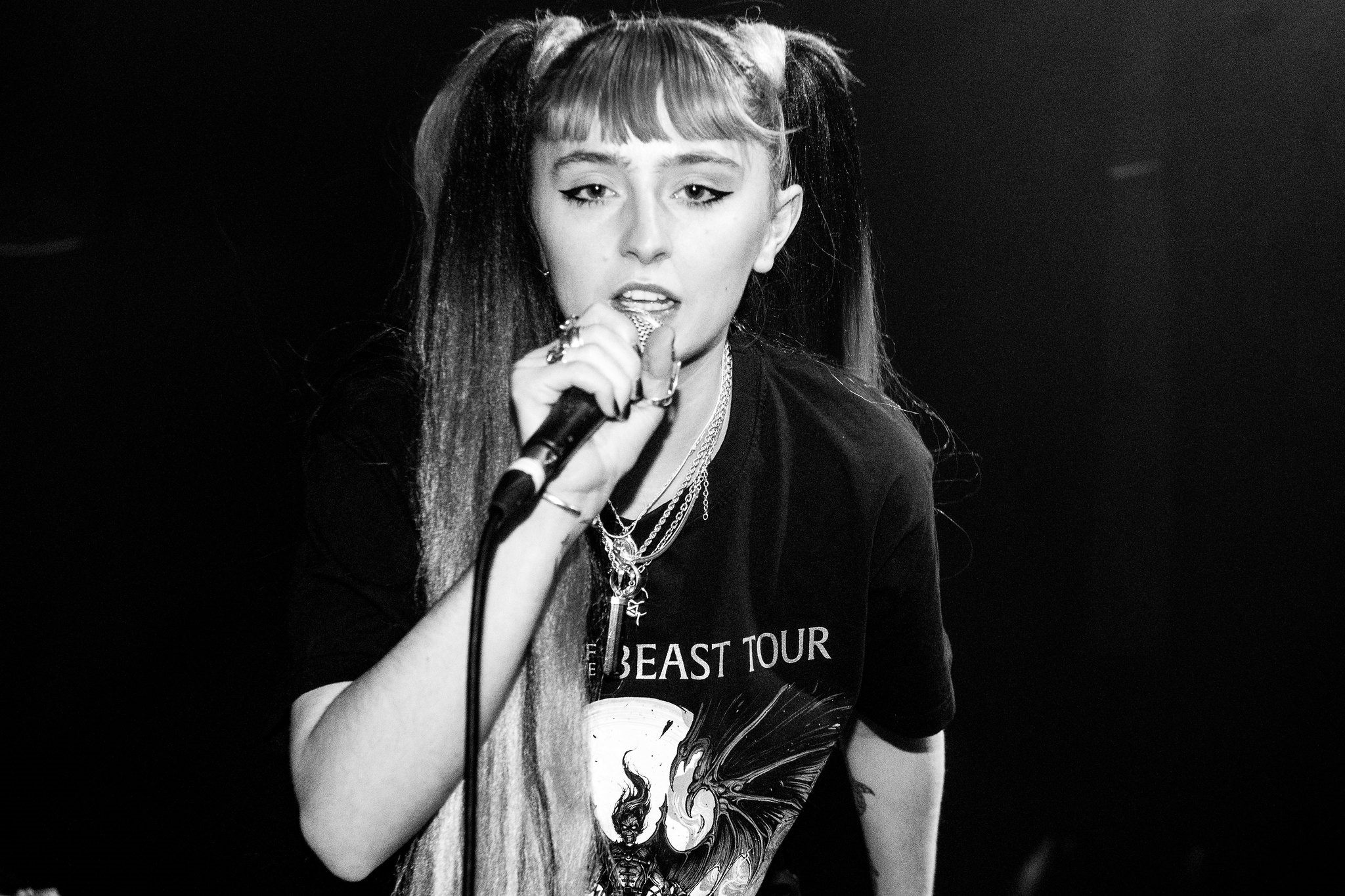 More info on Ashnikko HERE and listen to her music HERE. 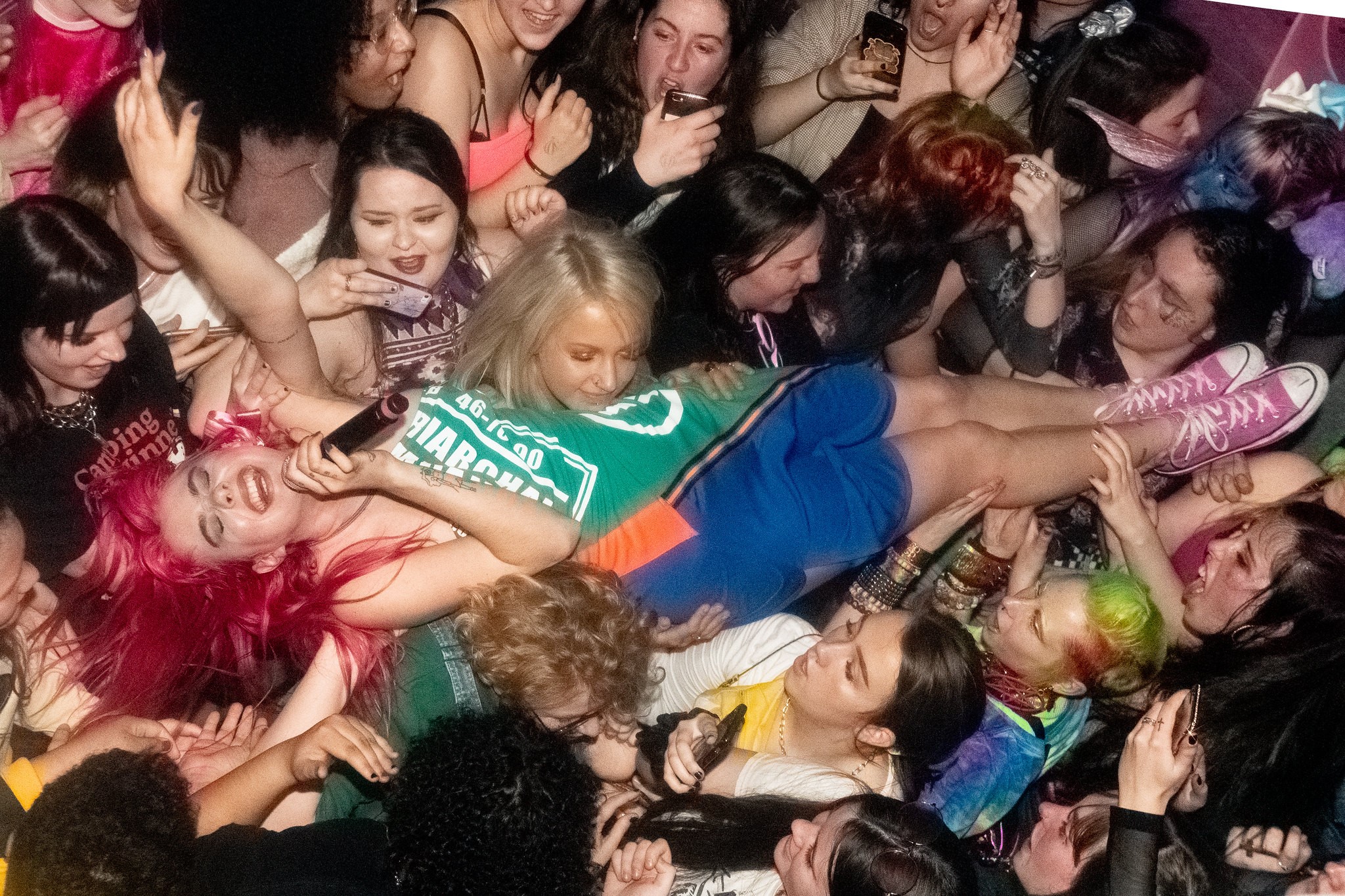 So with the crowd sufficiently whisked up, it was now time for North Londoner GIRLI (aka Milly Toomey) with her new friend DJ GG, (who has replaced DJ Kitty) to hit the stage. Thankfully this concert went ahead as it was a rescheduled date from a while back when GIRLI was rather unwell with Norovirus – it certainly was well worth the wait. 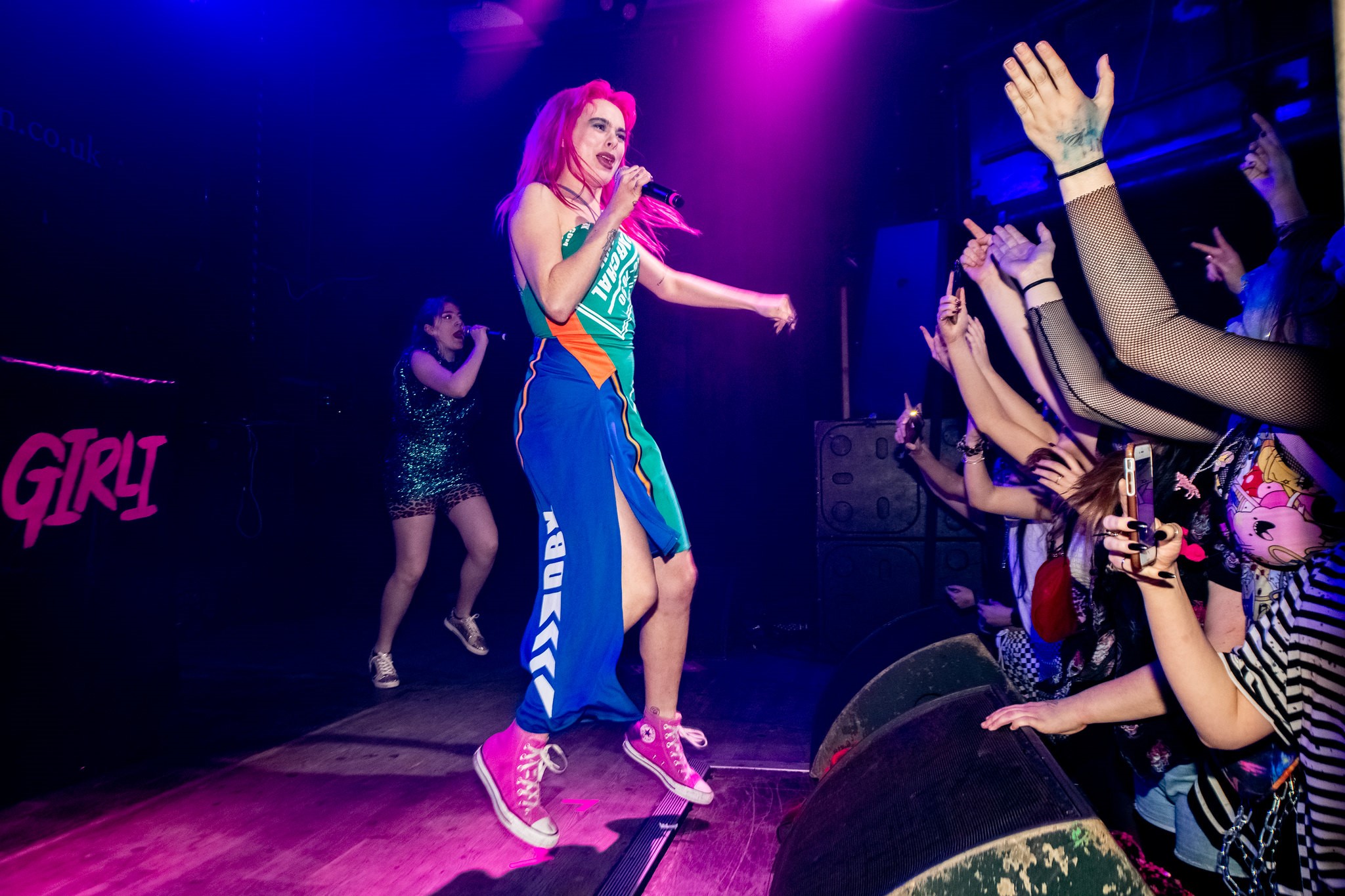 She was in Brighton as part of her 17-date UK tour to promote her excellent, but criminally short nine track debut album ‘Odd One Out’, which was unleashed on 5th April via PMR/Virgin EMI. She has so many corkers that could have been added to the disc, without any fear of padding it out. GIRLI is consistent! 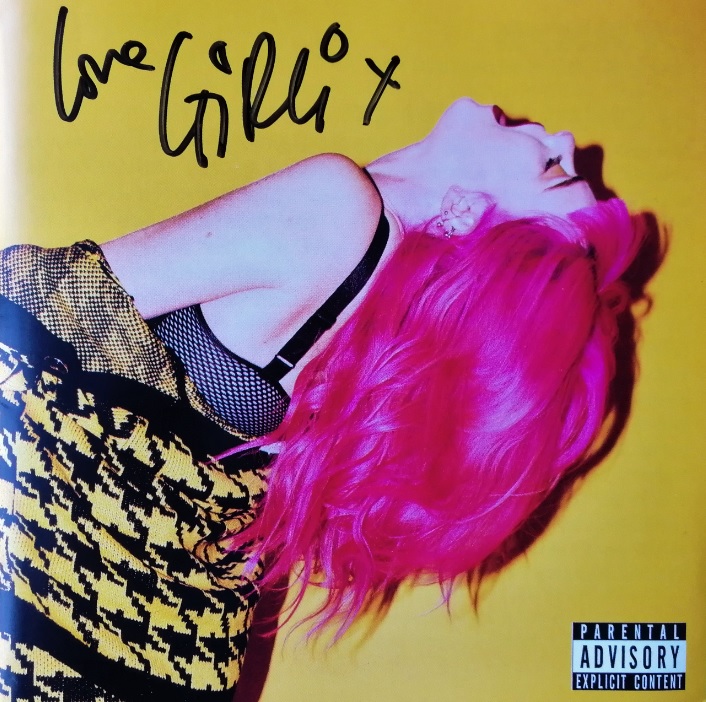 My signed ‘Odd One Out’ GIRLI album

This highly anticipated debut album ‘Odd One Out’ was co-written by GIRLI with various collaborators such as Fast Friends and MNDR / Peter Wade (Charli XCX, Brooke Candy) written and recorded in Los Angeles. ‘Odd One Out’ follows from GIRLI’s ‘Hot Mess‘ EP and features fan favourites ‘Day Month Second’, ‘Hot Mess’ and ‘Young’. The album marks the new mature alt-pop sound from GIRLI. Drawing inspiration from real life experiences ‘Odd One Out’ explores identity and the difficulties of adolescence. 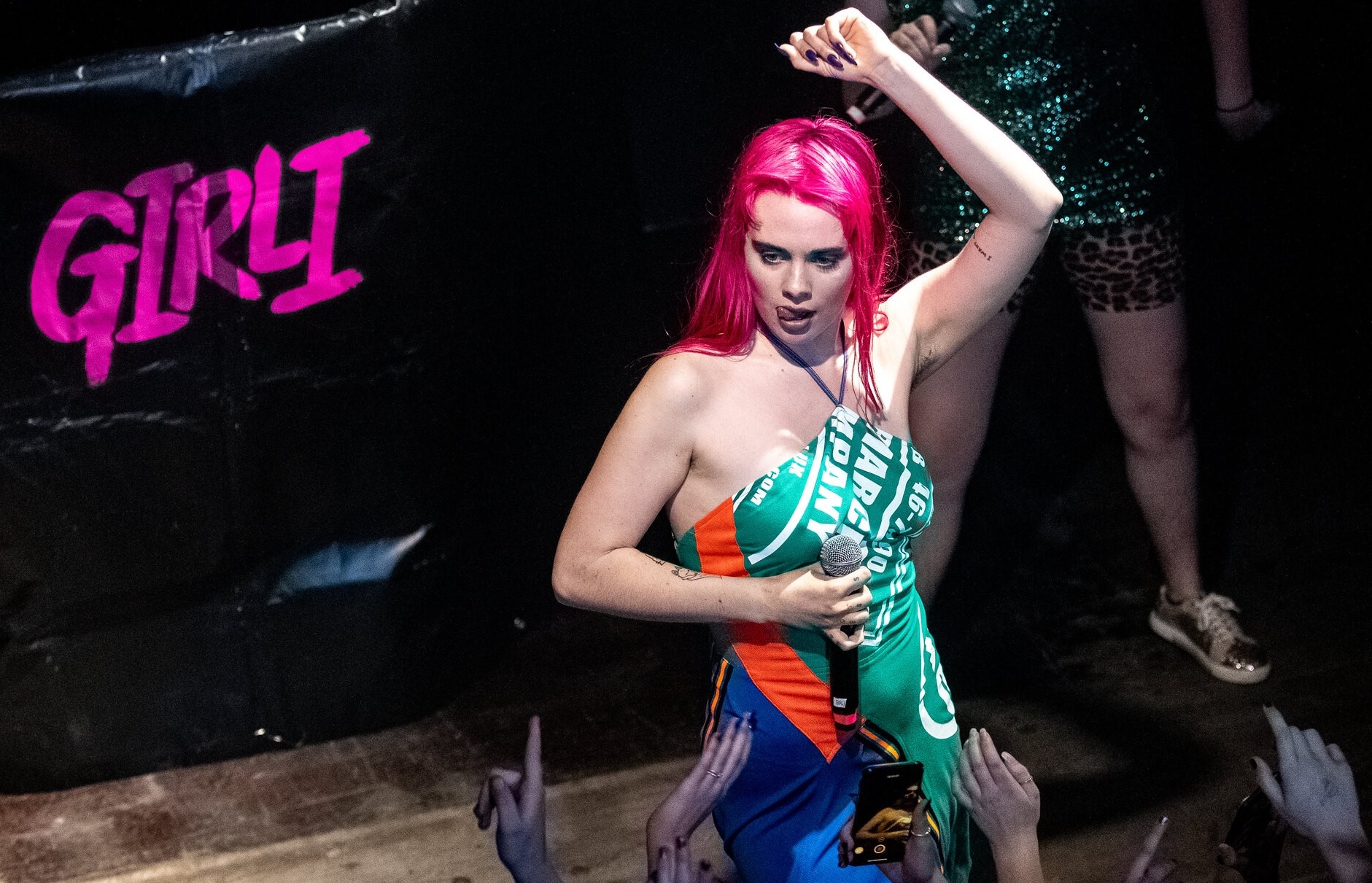 Rebellious GIRLI, whose chosen stage name was inspired by Blondie, has been a solo artist for five years now having parted company with her college mates from indie rock band Ask Martin. She has put together an attention grabbing image of part cyberpunk and part J-Pop and has since caught the attention of BBC Radio 1. She enthusiastically pushes her inventive sound combining the futuristic pop of Charli XCX, the cheek of Lily Allen, the attitude of M.I.A, the drive of Kate Bush and Grimes, with the slight weirdness of Björk. 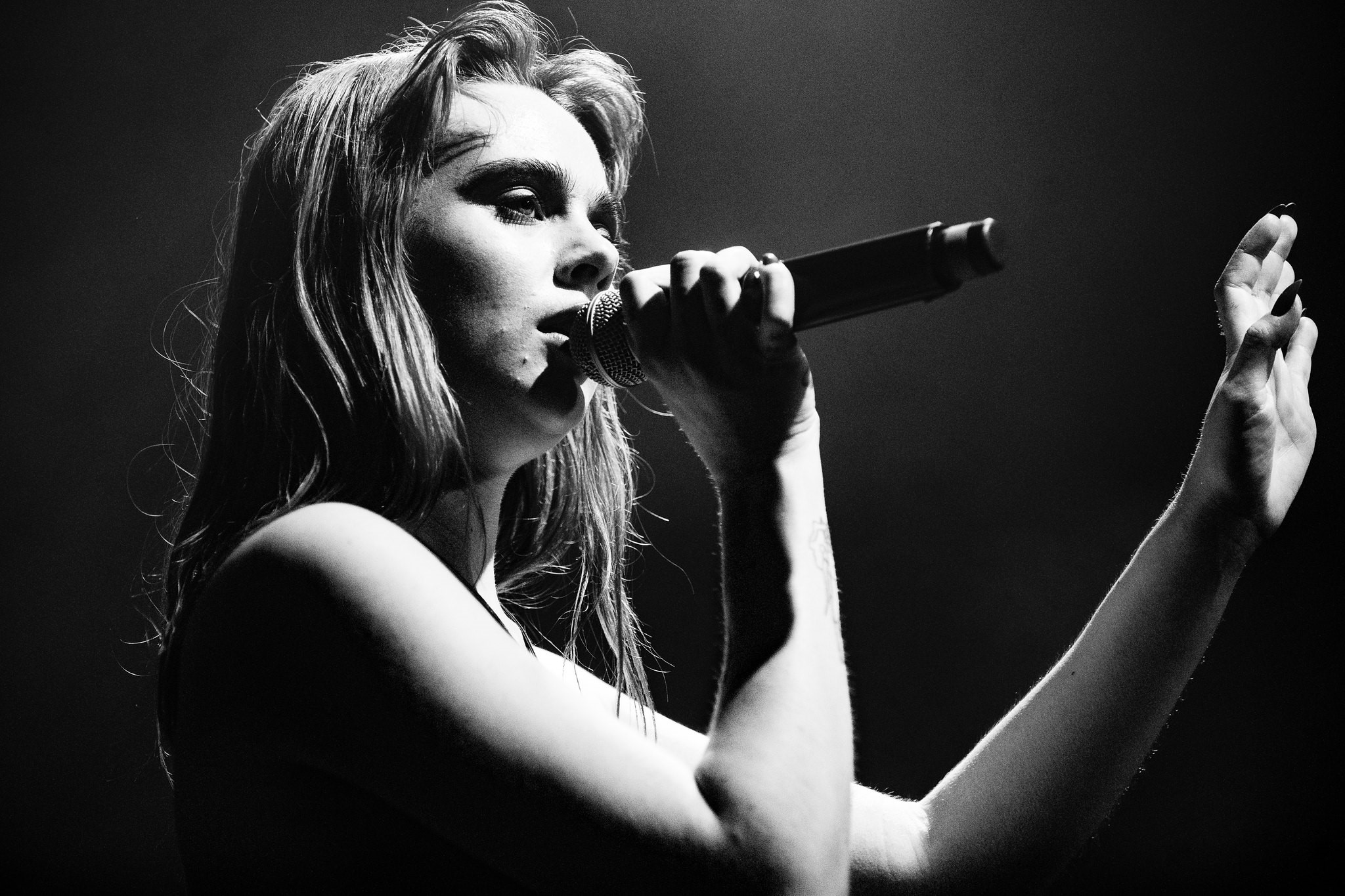 She writes her compositions mainly about her life as she explained several times during her wonderful set tonight. For instance there’s a tune called ‘Stick Out’ which was written when she discovered that one of her friends was a ‘fake friend’ as she was only befriending her because of her Instagram likes and then she moved onto someone else with more likes than GIRLI – how shallow! 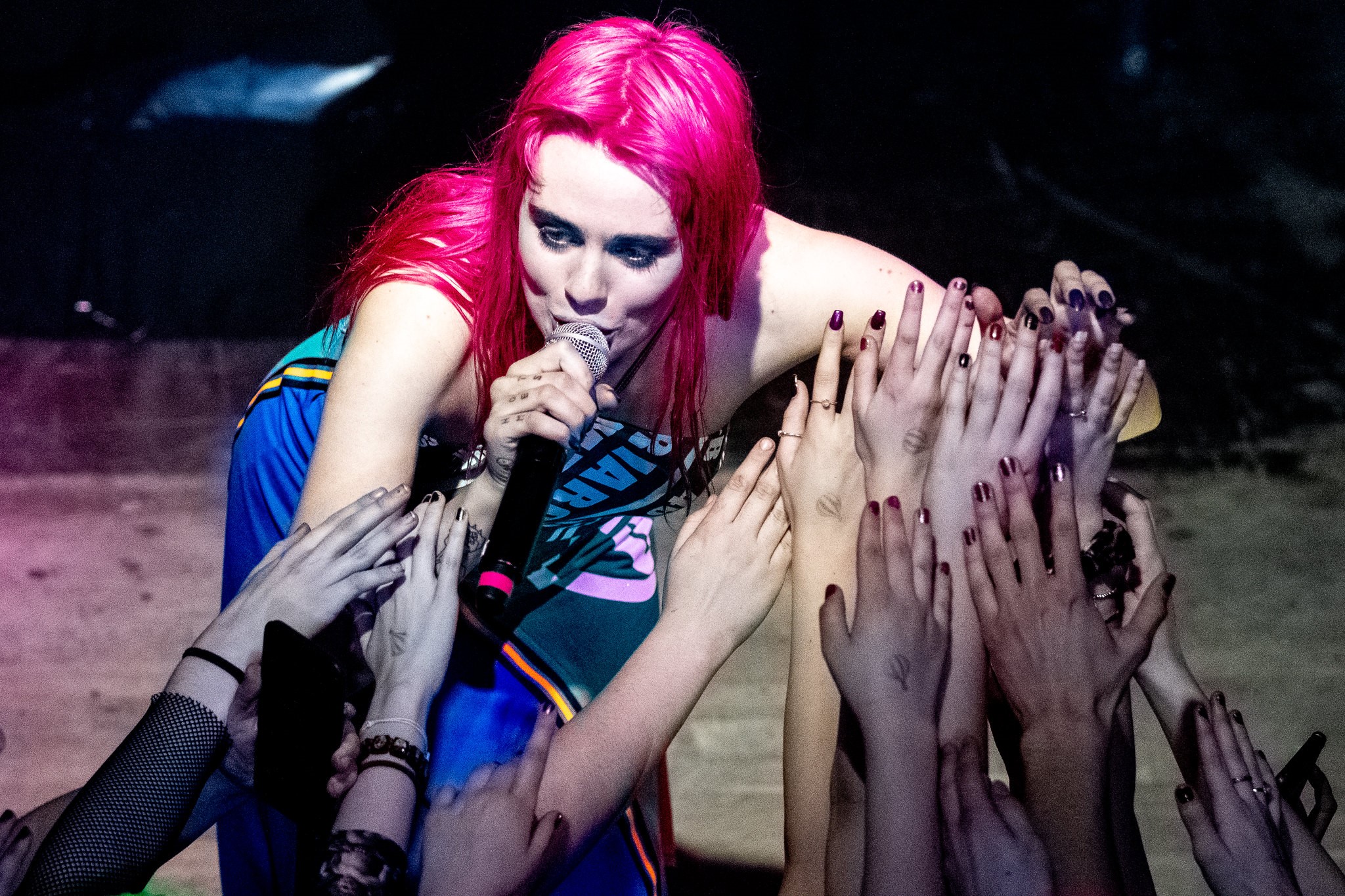 She has gone on record as saying:
“All the songs on this album are about feeling different from others. There’s a song about being rejected in love, and how it made me feel like I wasn’t good enough to be loved like everyone else is. There’s a song (‘Not That Girl’) about being talked down to because of my gender, one about being judged by others because of the way I dress or the way I dance or because of what colour I choose to have my hair. there’s one about how I used to live life vicariously through movies while I waited for life to happen to me. There’s a song (‘Up & Down’) about my struggles with mental health, about feeling overwhelmed by social media and how it makes you want to live up to other people’s expectations, about faking it to people because it’s easier than telling them the truth. there’s a song about how life isn’t what I expected it to be and how everyone else seems to be doing fine while I’m confused and freaking out.” 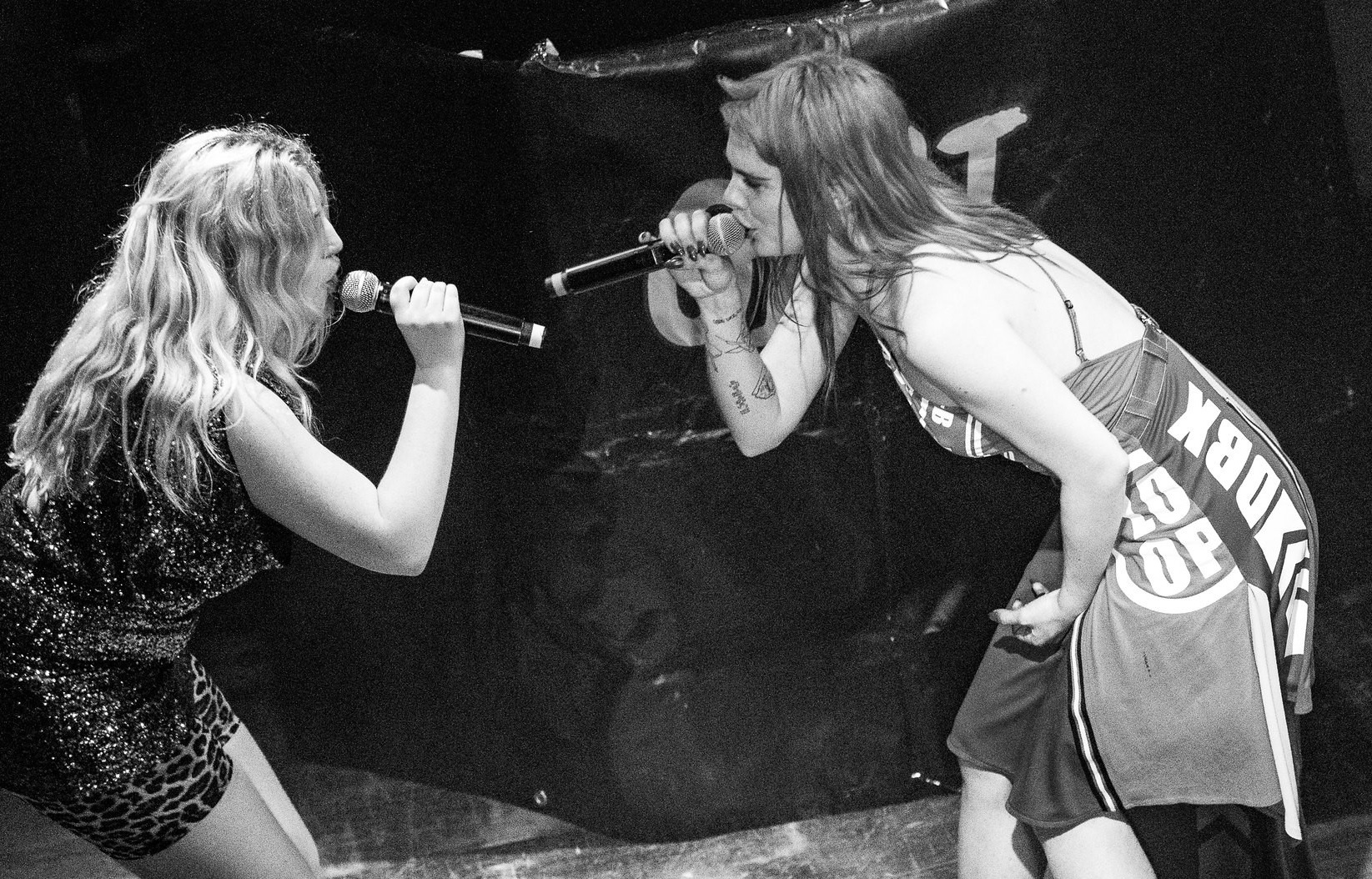 The set tonight was very bouncy, with the exception of ‘Friday Night Big Screen’, when DJ GG left the stage and GIRLI sat on a chair (not an Arne Jacobsen chair) but with ‘that’ Christine Keeler pose and the fans turned to torchlight mode on their phones. Ashnikko came back an accompanied GIRLI and DJ GG for a rendition of ‘Not That Girl’, which got the crowd going even more. 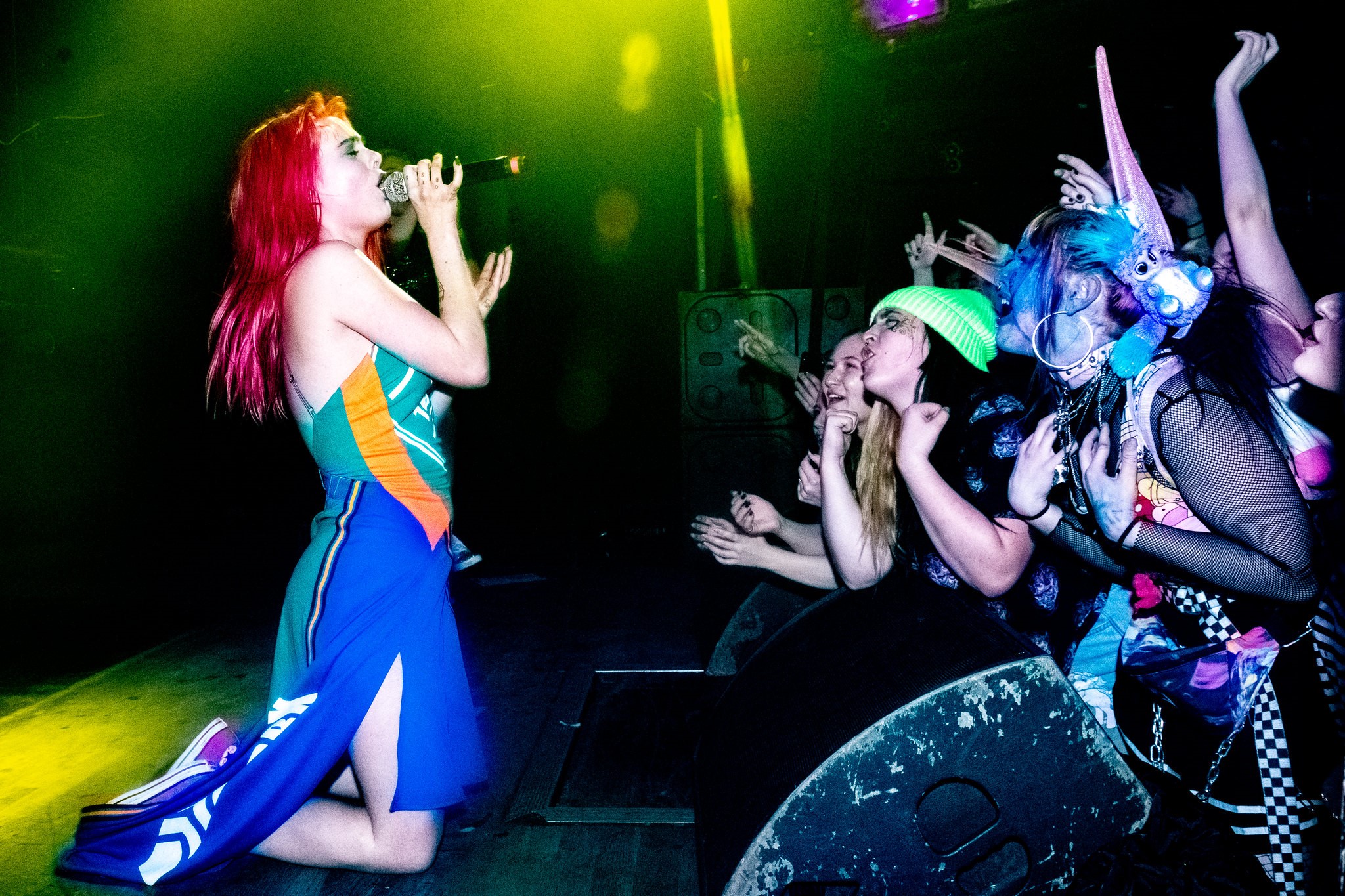 It was a great set, with my personal highlights being ‘Neck Contour’, and the two encore tracks ‘Deal With It’ and ‘Hot Mess’. During the latter track GIRLI went crowd surfing which nicely brought the evening to an end. Sadly no ‘So You Think You Can F**k With Me Do Ya’ but she played everything else that I had wished for. 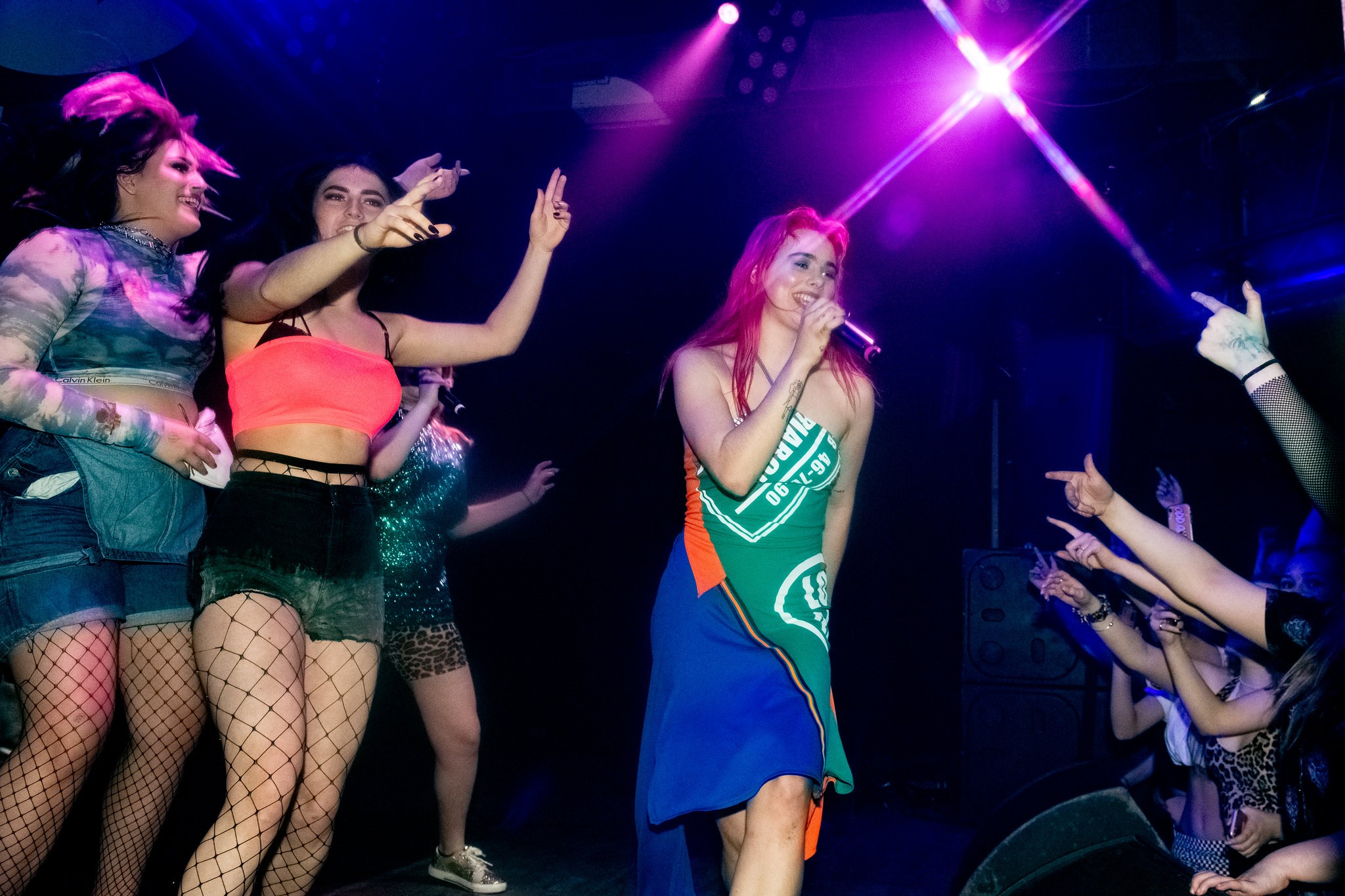 Everyone present enjoyed themselves and at the end of the day and that’s what it’s all about! 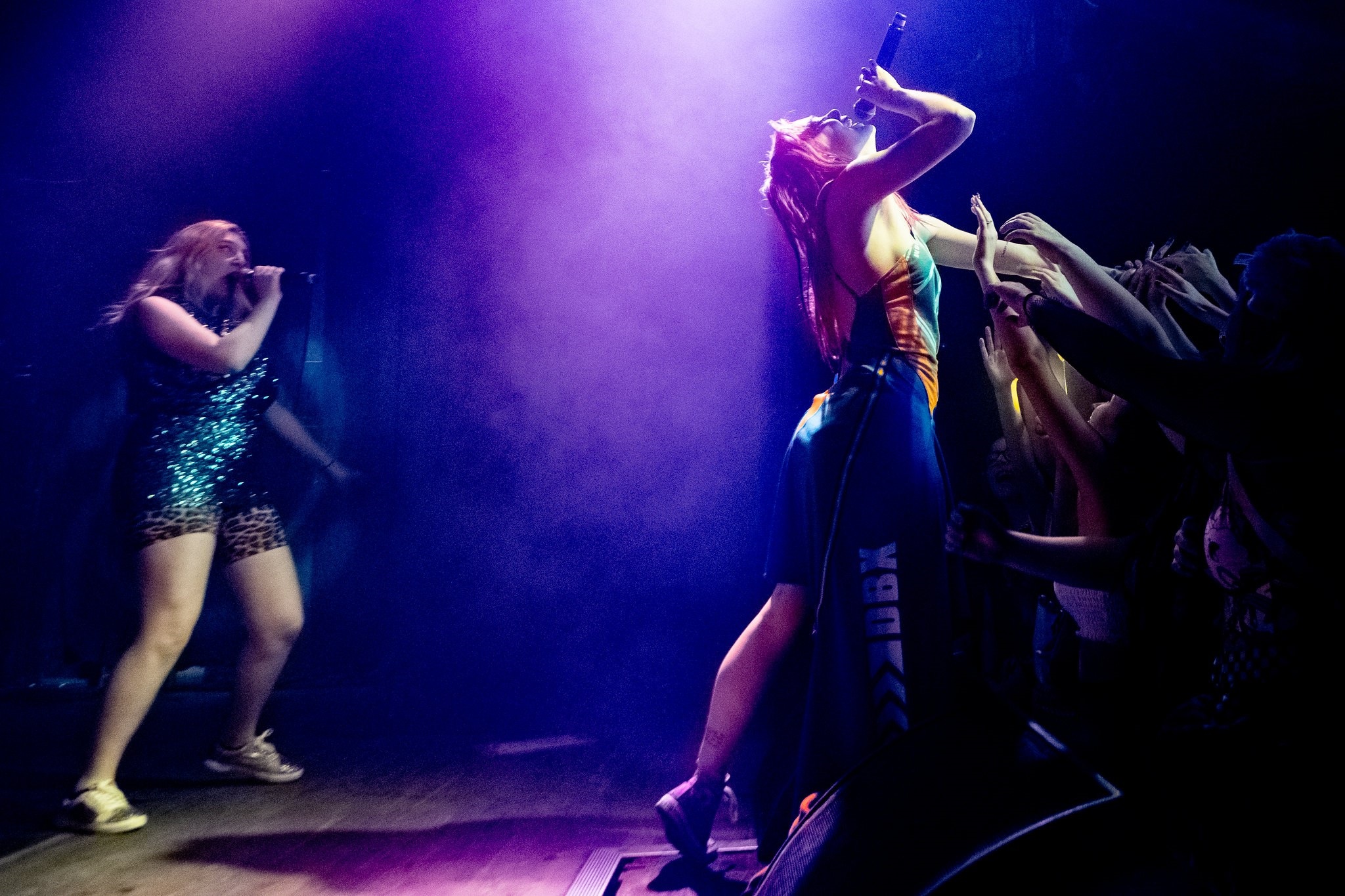 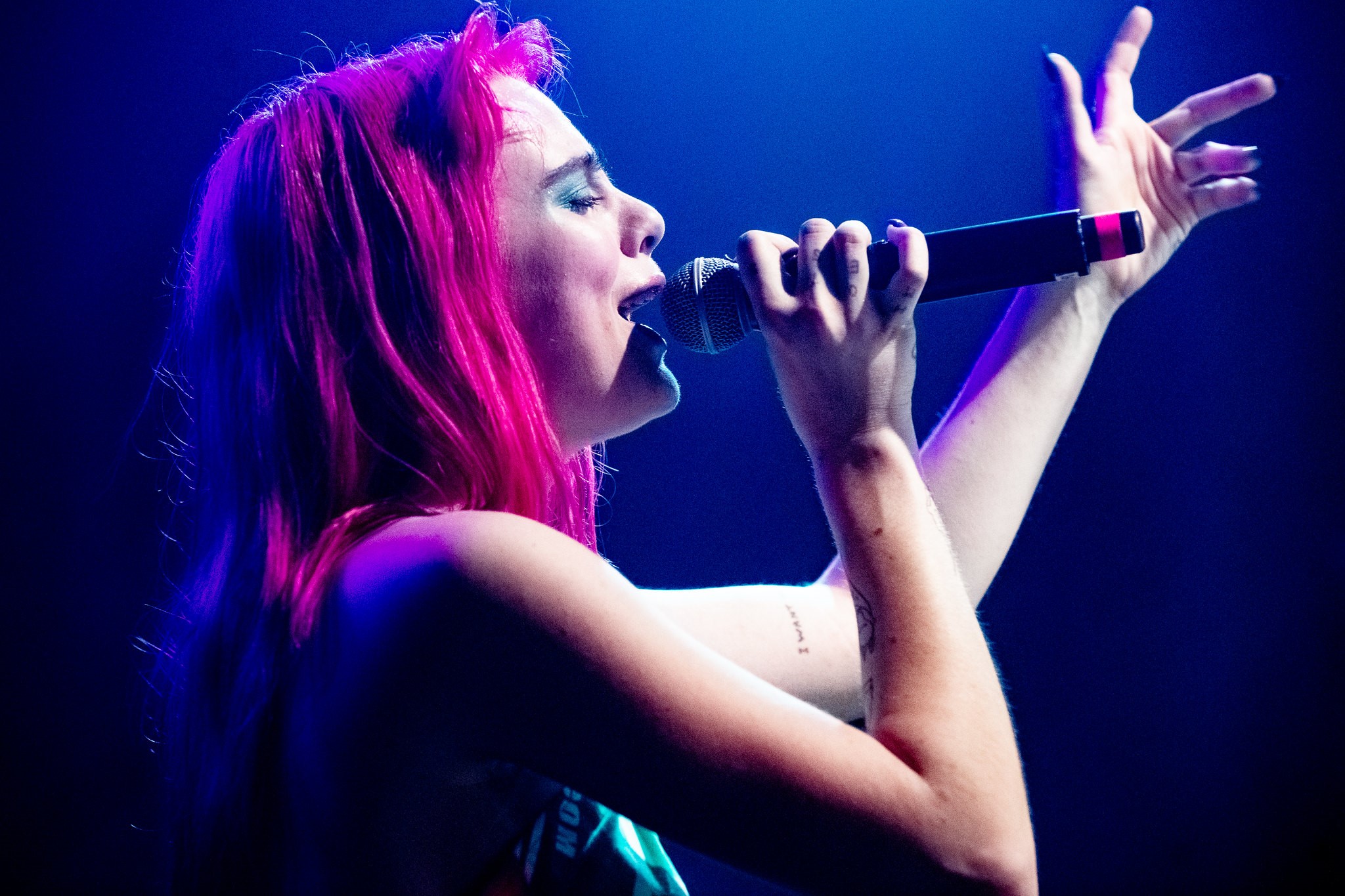 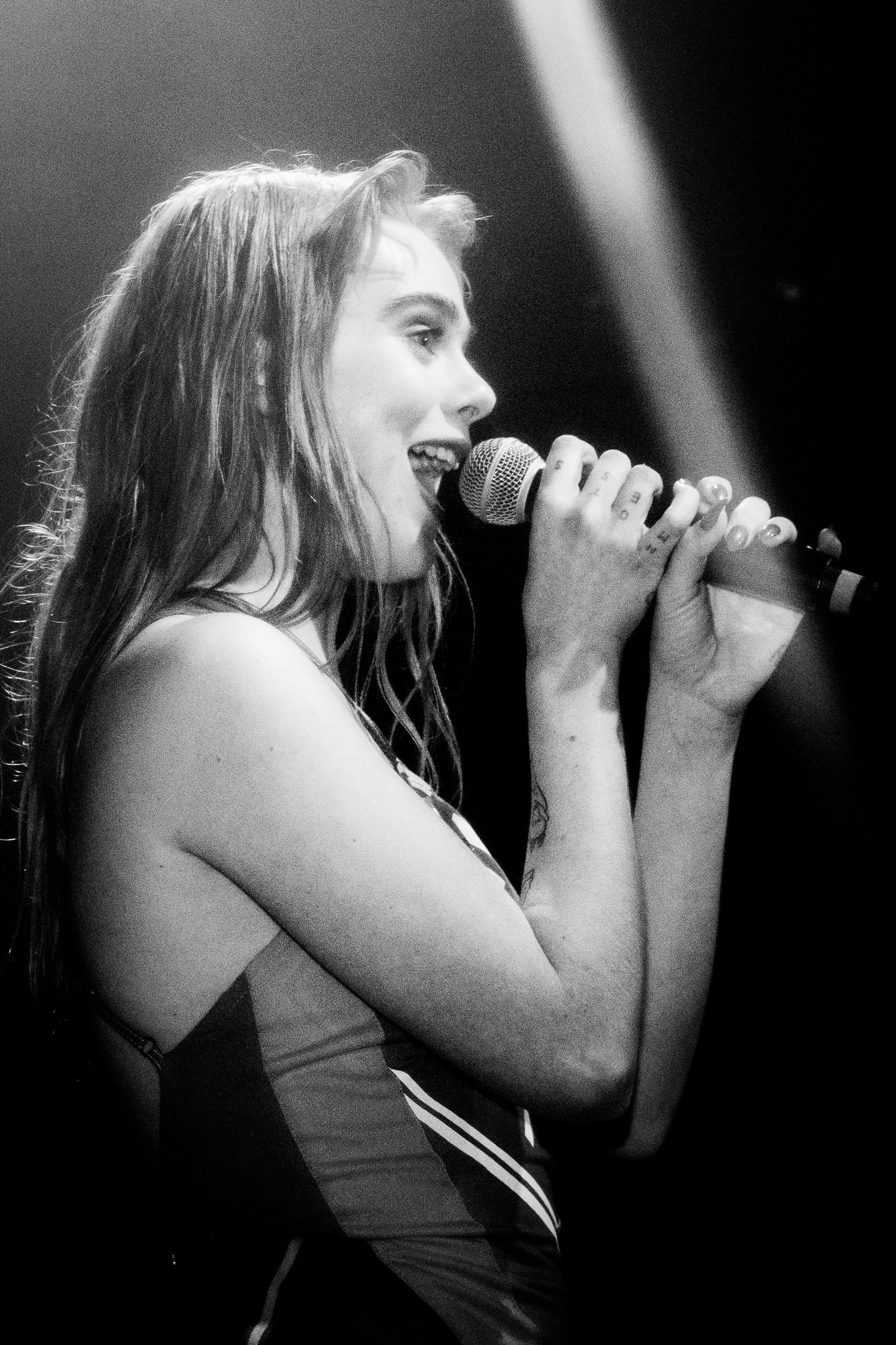 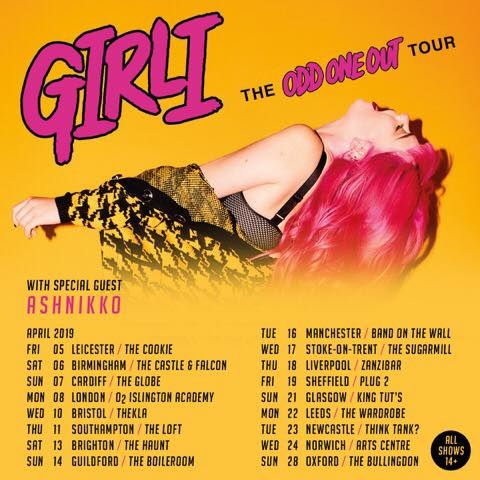