Brighton and Hove’s outgoing mayor looks back on her year

After a year in office Councillor Dee Simson is stepping down as mayor. 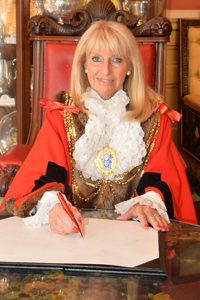 It was a busy time for the Woodingdean councillor who carried out more than 500 engagements.

Her highlights were the Remembrance Day commemorations, the Children’s Parade, citizenship ceremonies, Pride, the university graduations, the sleepout at the i360 and visiting patients at the Royal Sussex County Hospital on Christmas Day.

Councillor Simson said that she had decided to say yes to every invitation unless she was physically unable to be in two places at once.

Her busiest week saw 17 engagements and her busiest day was Remembrance Sunday with seven separate events.

She told the annual meeting of Brighton and Hove City Council that one of her most memorable days was the Preston Park Fire Station open day.

She she was dressed in a firefighter’s kit and ended up 100ft in the air on the aerial ladder platform with an amazing view of the railway viaduct.

During her year as mayor she attended birthdays for people turning 100, 101 and 102.

Councillor Simson said: “I never realised there were that many people that old in the city. It gives me some hope, I can tell you!”

She added: “I will miss being able to walk into a room full of people I’ve never met before and be treated as an old friend just because of the chains.”

One of her biggest challenges in raising money for her four mayoral charities was the sleep out.

Councillor Simson told her fellow councillors that she had never spent the night in a tent before but managed to sleep on cardboard in a sleeping bag.

She only later learnt that a mouse had been running around all night.

Conservative group leader councillor Steve Bell gave a vote of thanks, describing Councillor Simson as an outstanding mayor, saying that she had raised the bar exceptionally high.

He said: “She smashed the ball right out of the park and out of the city.”