Alcohol sales have been given the go-ahead on Hove Lawns, despite protests from neighbours.

Bars will only be allowed on the lawns for up to 40 days a year after pleas from dozens of people living in the area.

Brunswick and Adelaide ward’s Green councillors Phélim Mac Cafferty and Hannah Clare backed residents when Brighton and Hove City Council applied for a full licence from 9am to 10.30pm on the lawns.

Councillor Mac Cafferty was concerned about public safety as the lawns are reached by crossing the A259 seafront road which he said was busy with speeding cars.

He told a council licensing panel on Thursday 16 May: “The only thing we know that will happen if this application gets granted is that we will get more public nuisance as people get back into town or travel home through our streets.

“My residents will have to pay in terms of loss of their amenity as there is yet more time for noisy events. They will have to pay with intoxicated punters walking up their streets at 11pm and beyond at night.”

The panel, chaired by Labour councillor Jackie O’Quinn, sitting with Green councillor Lizzie Deane and Conservative councillor Carol Theobald, heard that there were five complaints in the past year relating to noise.

Councillor Mac Cafferty told them that he had received as many complaints in one weekend alone and had shared them with council officers.

Previously all bars at events on the lawns, from Paddle Around the Pier to the Ladyboys of Bangkok, were covered by temporary event notices (TENs).

The new licence is limited to 10 days at the Peace Statue end of the lawns, extending to the area in front of Adelaide Crescent where events such as the Foodies Festival take place.

A further 30 days are permitted on the lawns from south of Fourth Avenue to St John’s Road.

The restrictions on the number of days were introduced by the panel after they heard neighbours’ concerns.

The panel said that they found residents’ concerns “real and compelling”. 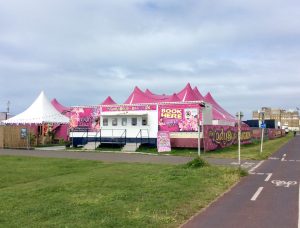 Other restrictions include starting the sale of alcohol from noon rather than 9am and ensuring that members of the council events team meet regularly with residents.

The panel also recommended that steps were taken to ensure that residents’ complaints were properly communicated to the licensing authority.