Two Brighton charities have each been awarded £3,000 in a contest run by an insurance company to celebrate its 60th anniversary.

The Crew Club and Rockinghorse were among five Sussex winners picked from almost 150 local applicants by charity insurer Ansvar.

And the Crew Club, in Whitehawk, also reaches a milestone anniversary this year, having been founded 20 years ago.

The community-led charity was set up after 16-year-old Jay Kensett was stabbed to death in Whitehawk in March 1999.

It offers a wide range of activities in one of the most deprived parts of Brighton from a purpose-built youth and community centre which also has outdoor sports facilities.

Ansvar said that it had been particularly interested to hear from charities that could explain how they would spend their prize money.

It said that the £3,000 won by the Crew Club would be used for a Christmas celebration for under-12s, a tea party for 100 elderly residents and a Community Fun Day.

Rockinghorse Children’s Charity was set up in 1967 to help sick children and babies. It wants to put the prize money towards plans to set up a paediatric orthopaedic virtual clinic to support children with suspected fractures.

The project will provide online information and videos to give children a visual understanding of what is happening.

The charity hopes that the virtual clinic will improve child safety and reduce the number of young people and their families who have to travel for assessment and treatment.

Ansvar’s managing director Sarah Cox said: “Ansvar is based in Sussex and is this year celebrating 60 years of insuring charities, churches and community groups in the UK.

“We launched our competition to give back to the county that has given us our home.

“Our judges had to narrow down nearly 150 entries to just five. You can imagine the job they had on their hands.

“The Crew Club has made a difference to so many children, young people and adults. It has been dedicated to doing so for 19 years and is a beacon to the community.” 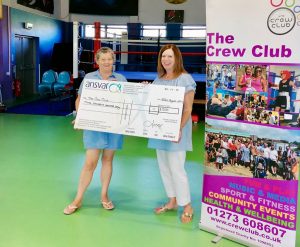 The Crew Club has been given £3,000 by specialist charity insurer Ansvar

“Rockinghorse Children’s Charity has been working tirelessly for over 50 years to improve the lives of sick children.

“They receive no government support and rely solely on donations so it is a tremendous pleasure to hand over this cheque for £3,000.

“Sussex is a very special place for us as we are headquartered in Eastbourne so it feels wonderful to give back to five wonderful charities that carry out such important work in our county every day.”

The other winners were Jamie’s Farm, between Lewes and Plumpton, the Eastbourne-based dementia charity Memory Lane and Willingdon Community Hub Library.