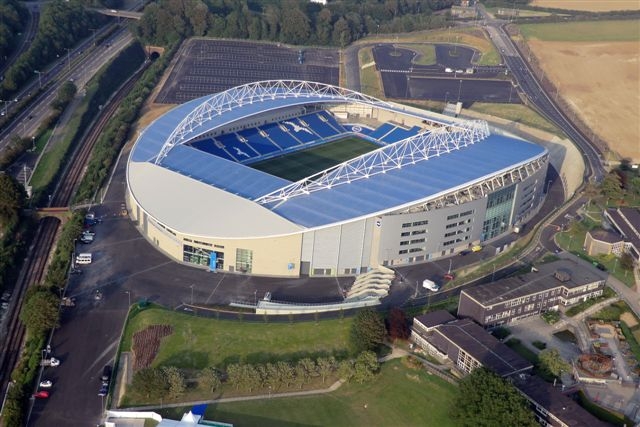 Three Brighton and Hove Albion fans are being investigated by police over racist incidents at the Amex.

The club says the fans are facing lengthy bans after fellow fans reported them to stewards, the first at the under-23 fixture against Tottenham Hotspur on Friday, 27 September and the second at Saturday’s home game against Spurs.

At the first match, two people were ejected from the stadium and their details been passed to Sussex Police for further investigation.

On Saturday, a man sitting in the North Stand was challenged by other supporters after making the remarks at which point he was alleged to have made threats to those who had witnessed his behaviour. He was removed by club stewards and handed to police officers.

Superintendent Howard Hodges said: “Along with Brighton and Hove Albion, we have made it absolutely clear that offences of this sort will not be tolerated and action will be taken against anyone who mistakenly believes that the anonymity of a large crowd will protect them.

“I commend the supporters who drew this incident to the attention of the club and the stewards who acted swiftly to deal with the matter.

“I would also like to support the club’s no nonsense stance in dealing swiftly and robustly with issues of this nature.”

Any anti-social behaviour during matches can be drawn to the attention of either stewards or police or by anonymously texting the Amex control room with details of the location affected, descriptions and the nature of the issue to 07880 196442.

Chief executive and deputy chairman Paul Barber said: “It’s very hard to comprehend why some individuals think it’s acceptable to behave in this way, but we are very clear that neither Brighton and Hove Albion, nor the wider football community, will tolerate racism or discrimination at any time, in any form.

“It is very encouraging that in both incidents our stewards were alerted to this totally unacceptable behaviour by other Albion fans and, working with Sussex Police, our staff were able to take swift action, which hopefully will increase the chances of a conviction.

“We do not want people exhibiting any kind of discriminatory or anti-social behaviour inside our stadium, and I would like to thank those Albion fans for reporting the incidents to us as soon as they heard it.

“We would urge any fans confronted with similar discriminatory behaviour to report it immediately, either directly to a steward or via our anonymous hotline, and we will take strong action.”

A 24-year-old man from Brighton was arrested on Saturday on suspicion of racially aggravated intentional harassment and has been bailed until November 1 with conditions not to attend the American Express Community Stadium or its footprint.