They’re playing all the right ‘Chords’ 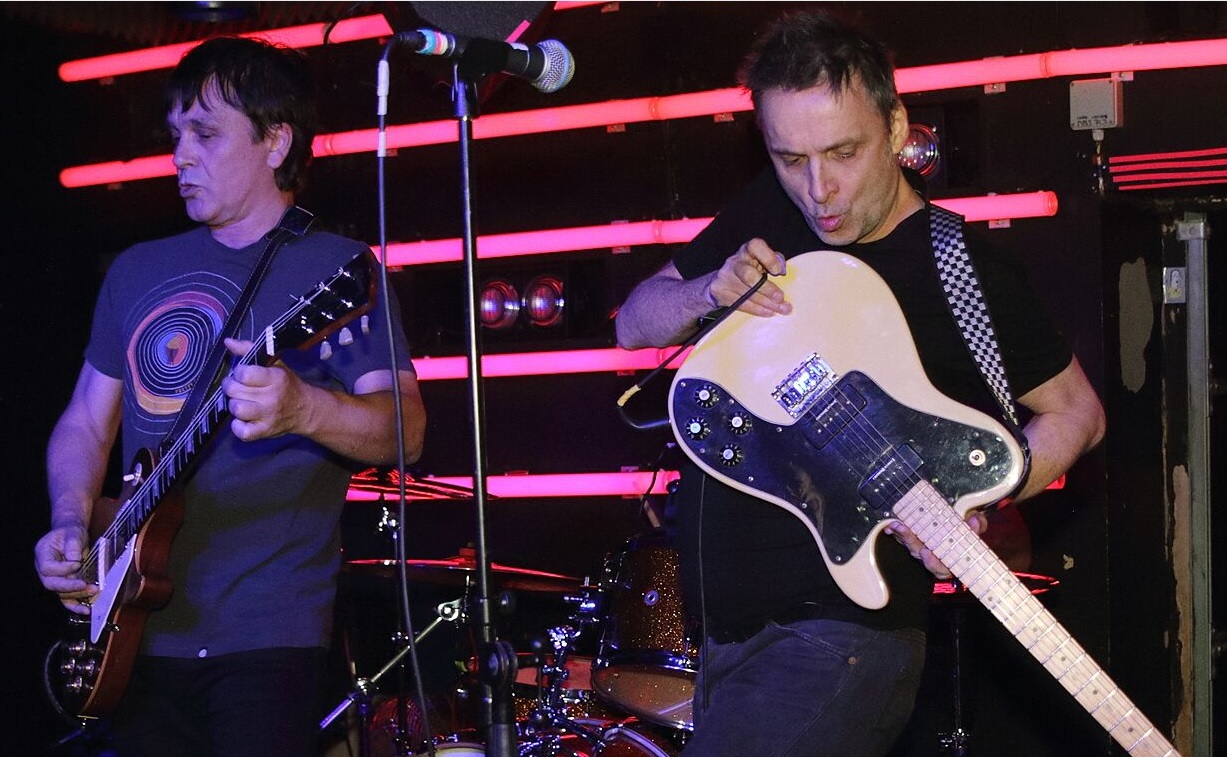 As time goes on in the wonderful world of music, bands and artists often mature with age. It’s often noted that the longer groups are in existence, the more likely it is that members will come and go and fall by the wayside and go off and get involved in their latest exciting adventure. Regularly groups call it a day and then reconvene many years later, sometimes with the original lineup if you are lucky or more than likely with a majority back in the fold. It’s all part of the wonderful journey called …’LIFE’!

I would suggest that tonight’s two acts have both been on the ‘life’ trial and that it is in fact a pleasure to be able to hear music from back in the day that often holds many fond memories for their fans. It’s very likely that the punters gathered tonight in Patterns have mainly come on the grounds of nostalgia, with possibly a certain number actually unaware of exactly who the original personnel were that laid down their favourite hits from back in the day. Being blissfully ignorant is sometimes better than actually discovering the harsh truth that in fact in a few cases there are actually no original band members left in the act that you watching, Dr Feelgood springs to mind. That’s not dissing them, as I have witnessed the ‘current’ lineup and have enjoyed listening to ‘Milk And Alcohol’ being performed live right in front of me. It’s a chance for many folk to get out of the house and leave the teenagers that are left living there to have a bit of free time whilst you are out. Mind you with nightclubs opening later and going on longer, it’s more likely that the parents will go out to their fave gig and then return home in time to catch all of ‘Match Of The Day’, whilst their offspring will be heading off out to go clubbing until 5am. This is exactly what happened in our household tonight……

I headed off early in Brighton as the first band was due on stage at 7:30pm and indeed the headliners afterwards started their set at 8:39pm and were all done by 9:46pm. Which was plenty of time to toddle on home and thus pass one of the sprogs on the way out. 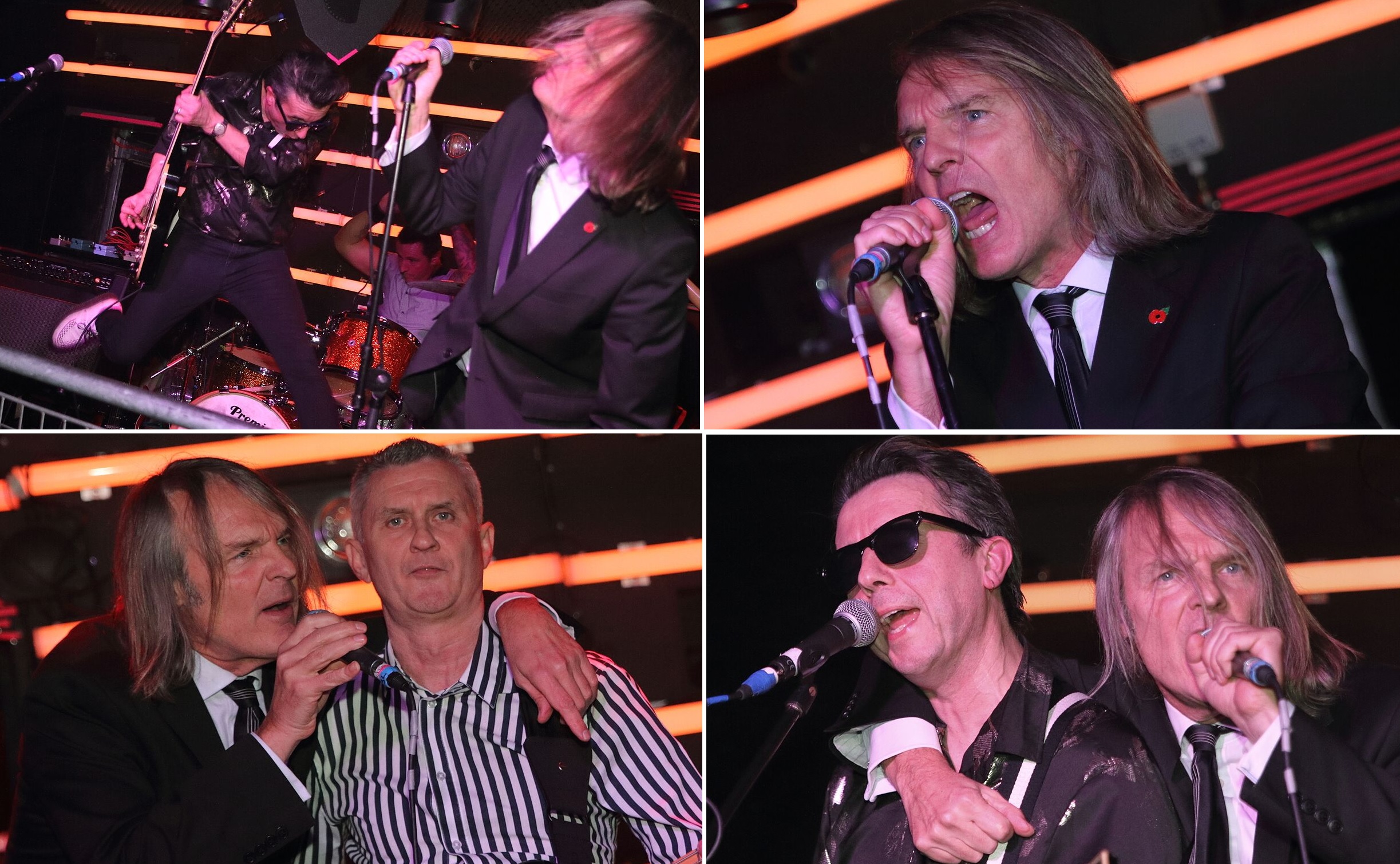 So my good friends, I was out and about in Brighton in order to again catch a live performance from The Chords UK. and also Department S, (no not the TV series which gave them their name featuring Peter Wyngarde as author Jason King, Joel Fabiani as Stewart Sullivan, and Rosemary Nicols as computer expert Annabelle Hurst).

I knew I liked Department S and The Chords UK were a bit of an unknown to me. It had the feeling of a double-header to myself and several of the fans gathered thereabouts, but someone had to go first and it was Department S on this whole tour.

I can recall witnessing Department S at the punk ‘Undercover Festival’ a few years ago when it came to Brighton Racecourse and they were certainly one of the surprise packages of the event for me. I really didn’t expect much, as sadly their original Jersey born vocalist Vaughn Toulouse had passed away back in 1991 aged just 32. Toulouse was very much the frontman of the band and had very big shoes to fill on the personality front. But I have to say that the new lineup were great and it was a no-brainer in seeing them again at Patterns.

Department S evolved from a previous punk/ska combo, Guns for Hire, fronted by Vaughn Toulouse and also featuring former Madness drummer John Hasler. Mike Herbage joined them on guitar and wrote Guns for Hire’s only single, ‘I’m Gonna Rough My Girlfriend’s Boyfriend Up Tonight’, released on the Korova record label. The group then became Department S with the addition of bassist Tony Lordan, drummer Stuart Mizon and keyboardist Eddie Roxy (born Anthony Edward Lloyd-Barnes). They debuted at the Rock Garden in London on 24 September 1980. Demon Records released their debut single, ‘Is Vic There?’, in December 1980.

The Department S at Patterns consists of original keyboardist Eddie Roxy, who has more than capably taken on the role of vocalist in his own ‘staring into the distance with his piercing blue eyes’ stance, and he is accompanied by guitarist Phil Thompson, bassist Mike Lea and ex-Eddie and the Hot Rods drummer Simon Bowley.

We get under way with the intro tape blasting out the Cyril Stapleton And His Orchestra ‘Department S Theme’, which leads to new (spinning) stixman Bowley showing us exactly what a powerhouse he is. He is joined by the remaining trio including the other new boy Lea on bass.

We were treated to a decent career-spanning dozen song set including the singles ‘I Want’ from 1981, ‘Going Left Right’ (1981) and most naturally the timeless 1980 classic ‘Is Vic There?’, which thankfully got the 12” extended treatment. We also had some as yet unreleased tracks in the form of ‘Angel Of London’ and ‘Saul…’ which is encouraging to note as the band are therefore clearly looking forward as well as back and left, right, left, right…..

Thankfully the lighting engineer kept the 26 striplights on a pleasant orange setting during this set, which certainly assisted with photography. It is virtually always on burn out red or pink or piercing blue, so this made a pleasant change….it wasn’t going to last for The Chords UK though. 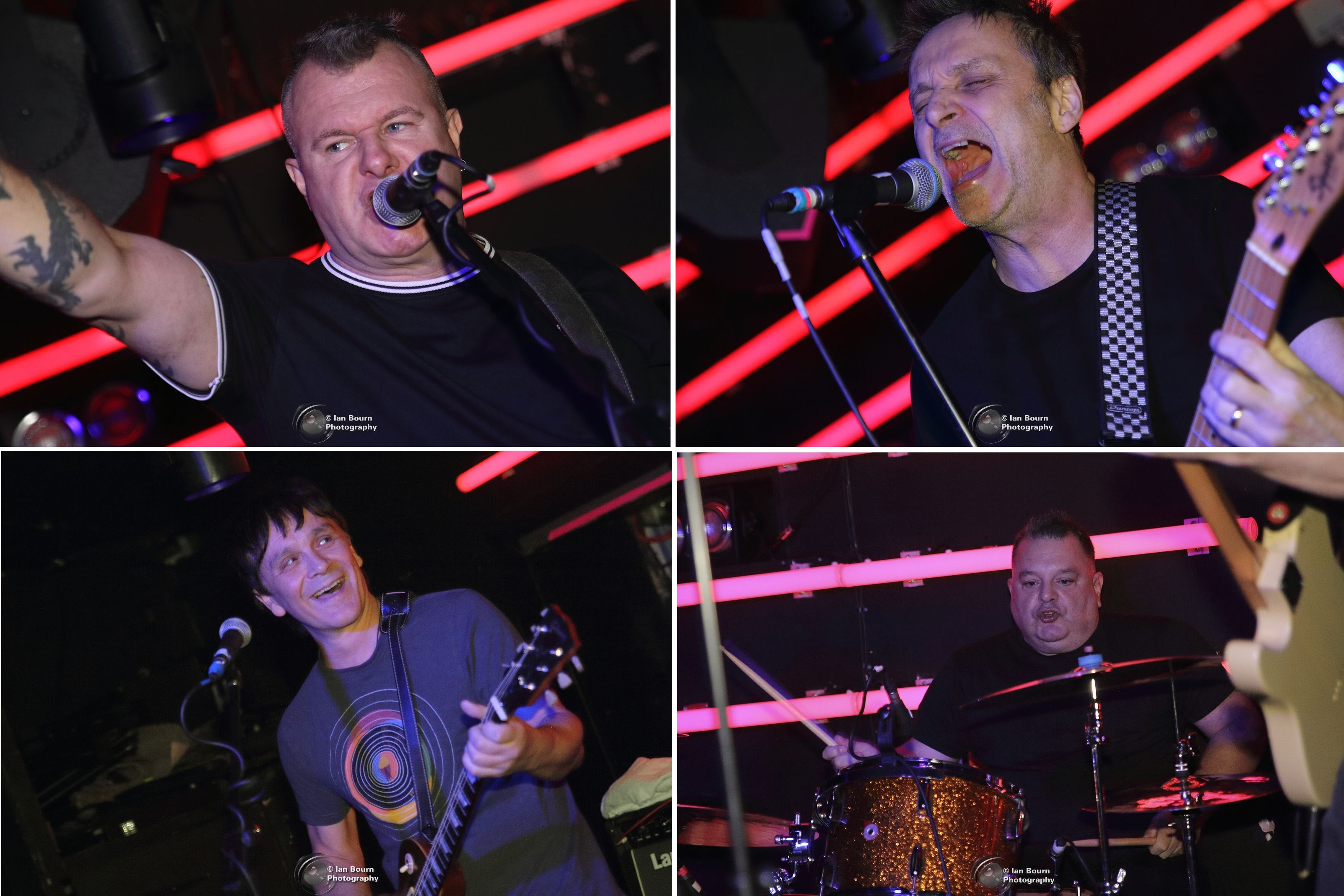 The Chords UK were in Brighton as part of their 10-date autumn UK tour, which kicked off at The Fiddlers in Bristol on Friday 18th October, and then took in Nottingham, Leeds, Manchester, Edinburgh, Newcastle and Dover prior to their appearance in Brighton. They are helmed by founding member and songwriter, Chris Pope, who according to Paul Weller “is the best songwriter of his generation”. Chris was this evening accompanied by Mic Stoner, Kenny Cooper and Sandy Michie.

This South East London band formed in 1978 were originally known as The Chords. Singer/guitarist Billy Hassett and his bassist cousin, Martin Mason, advertised for musicians in the NME and found guitarist and songwriter, Chris Pope. Original drummer Paul Halpin did not stay long, at least behind his drum kit, and eventually became the group’s tour manager In his place came Brett “Buddy” Ascott, and by March 1979 The Chords were taking the stage, but by September 1981 the band had called it a day. Then in August 2010, The Chords went back on the road with their original line-up, promoting the single, ‘Another Thing Coming’, and playing gigs across the UK. They also toured Australia and Japan in 2012. However since 2013 The Chords UK have continued the legacy of Mod Revival heroes The Chords by performing all of the band’s handful of Top 75 hit singles and album tracks from back in the day, along with performing material from the two albums by The Chords UK, ‘Take On Life’ and ‘Nowhere Land’.

The Chords UK took to the stage at 8:39pm and entertained the crowds for an hour and seven minutes, performing over a dozen compositions ranging from 1980 to 2018 releases. This was my first encounter with the band and they certainly fall in the same mould as The Jam, The Vapors and certain aspects of The Who, which is exactly where they would love to be placed.

Yes, once again, we are dealing with a sole original band member, but their r’n’b mod rocking tracks that weren’t as brief as punk tracks, were in the main alright. We had the first tune that Pope ever penned for The Chords, namely ‘Now It’s Gone’, as well as ‘I’m Not Sure’ which stems from 1980 and was his state of mind about being in The Chords at the time, but tonight it sounded pretty decent to me. As did the ‘So Far Away’/’Pressure Drop’ medley which seriously reminded me of The Clash, with Mic’s decent bass-work on his unusually shaped instrument. ‘Hipsters Of London’ was a highlight as well.

Looking forward, Pope informed us of the forthcoming Christmas single titled ‘Come On It’s Christmas Day!’, which will be their first foray into the seasonal market, and then by 9:46pm it was all over. The crowd enjoyed themselves tonight and both bands really appreciated the punters making the effort in such terrible weather conditions.

Further information on The Chords UK can be found at popemusic.co.uk and you can purchase their albums HERE. 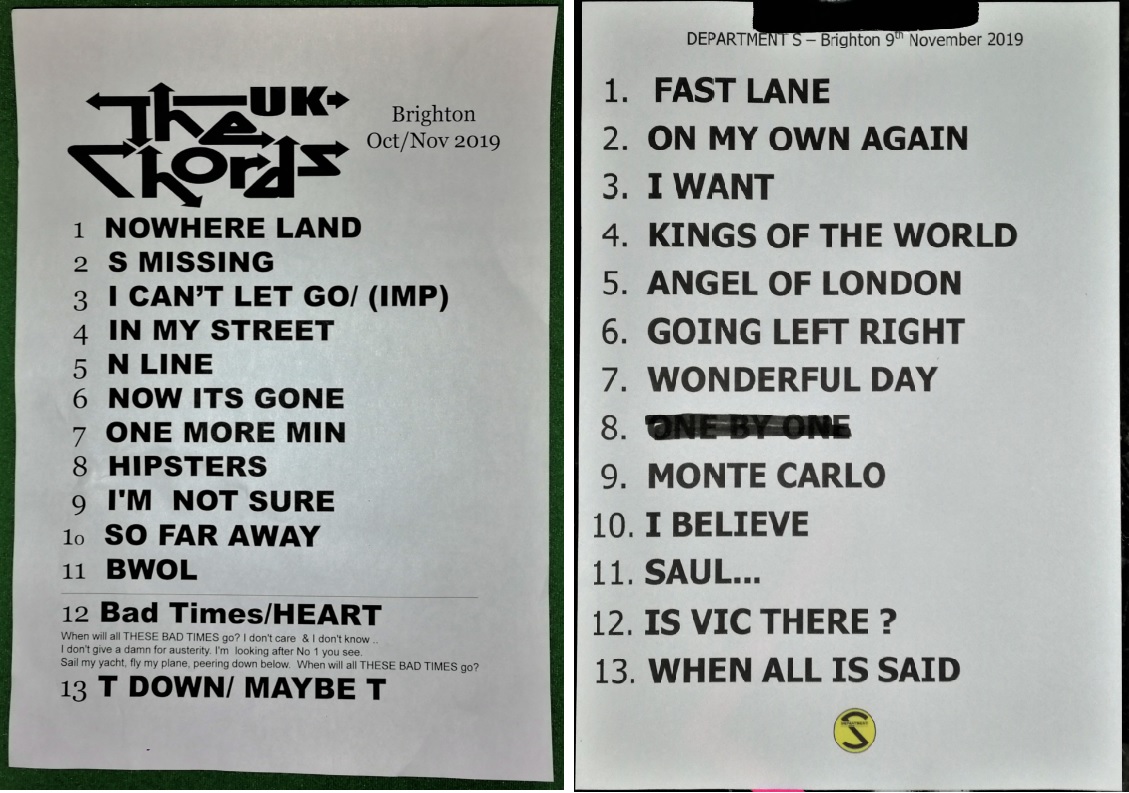 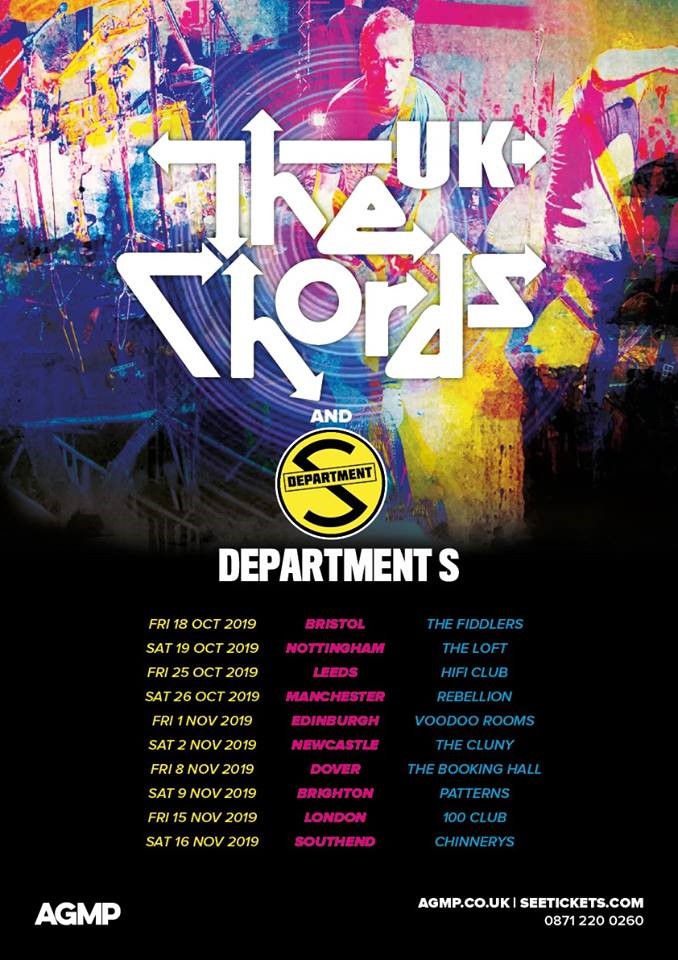 Deafened in Brighton by Guitar Wolf