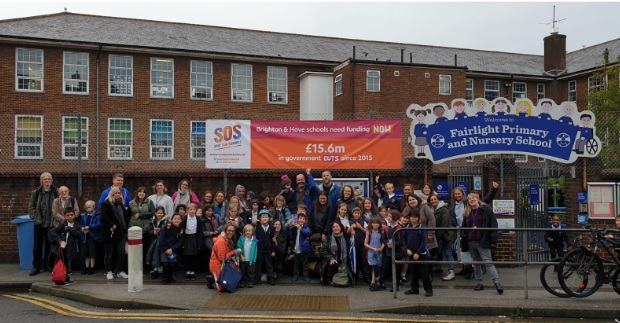 Schools cuts campaigners are asking headteachers to defy a request to comply with council election rules and take down banners from outside schools.

The Save Our Schools campaign gave banners detailing how much money schools have lost since 2015, based on figures compiled by education unions, many of which were unfurled outside Brighton and Hove schools last month.

Now, the council has asked schools to remove them because of rules governing what local authorities and schools can say in the run-up to an election, commonly known as going into purdah.

A similar request was made ahead of the June 2017 snap election, but Save Our Schools says it was largely ignored by headteachers with no repercussions.

Campaigner Catherine Fisher said: “The request to take banners down is an attempt to shut down debate about the ongoing crisis in school funding when it should be high on the agenda for all political parties.

“This issue has not gone away, in fact for many schools the cuts are set to deepen next year. The figures on our banners are a statement of fact; these disturbing facts should not be hidden just because there is an election underway. We urge all head teachers to stand firm and keep banners up.”

Fellow campaigner Gemma Haley said:”We are not experts on purdah but the guidance we have seen says suggests that ‘The misuse and extension of the term purdah should not be used to curb free speech or stifle public debate’.

“We think the request to take down our banners does exactly that.”

A council spokesperson said: “National legal guidance says that in the pre-election period councils and schools should not publish or display any material containing views on any controversial issue which could be construed as supporting one political party or candidate over another.

“With this in mind we have advised our schools to remove publicity that may come under this description, including the SOS banners.”