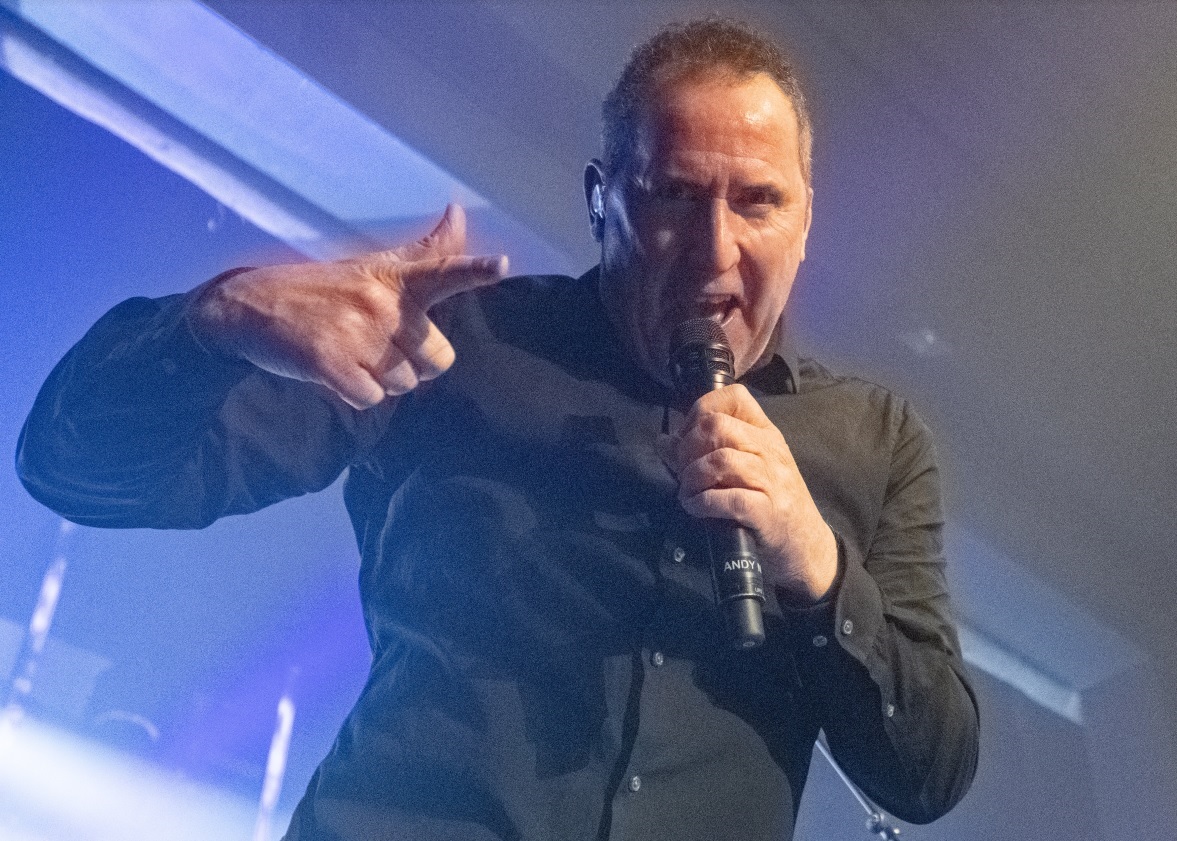 It’s amazing how time flies! You know it’s virtually two years to the day since Orchestral Manoeuvres In The Dark (OMD) performed at the De La Warr Pavilion in Bexhill-on-Sea. The Brighton & Hove News Music Team were there last time (read our report HERE) and we were back this evening!

Having said that, it’s actually an amazing 14,653 days since I first saw them! Which is equal to 40 years, 1 month, and 12 days. They were performing as the support act for Gary Numan at the Brighton Dome Concert Hall on Friday 5th October 1979. I remember the concert very well indeed, especially as someone shouted out really loudly from the balcony during a quiet part “we want live music”, in reference to ‘Winston’ the tape recorder. As back in those fledgling days, OMD was Andy McCluskey, Paul Humphreys and ‘Winston’. The feeling at that time towards this new electronic music with all of its machines, was that it was going to take real people’s jobs! I can remember the Musicians Union being up in arms about it. And yet here we are 40 years later with OMD and many of the same ilk, such as the aforementioned Gary Numan, The Human League, Heaven 17 and Kraftwerk are still on the case!

“Electronic music is our language,” Andy McCluskey says. “It’s how we talk.”
“We’re at our best when we’re in a room together, working,” Paul Humphreys adds. “That’s when the sparks and ideas happen. It’s the same now as it ever was.”

OMD were formed in 1978 by teenage friends McCluskey and Humphreys. They quickly became electro-pioneers with a string of hit albums released throughout the 1980’s, eventually selling over 25 million singles and 15 million albums across their career to date, establishing them as electronic synthesiser pioneers and one of Britain’s best-loved pop groups. This statement is backed up by the fact that this evening’s concert has sold out, as it did two years ago.

There is still a clear demand for OMD’s music in this day an age. Their brand new 40th anniversary celebration 40 track collection album ‘Souvenir’ burst in at No.18 in the Official UK Albums Chart last month. If you are an OMD fan or just dipping into their sound, then this release is THE perfect choice! It is in my opinion, one of the finest ‘greatest hits’ collections ever released! “That’s a bold statement” I hear many of you say, but dear reader it’s true! 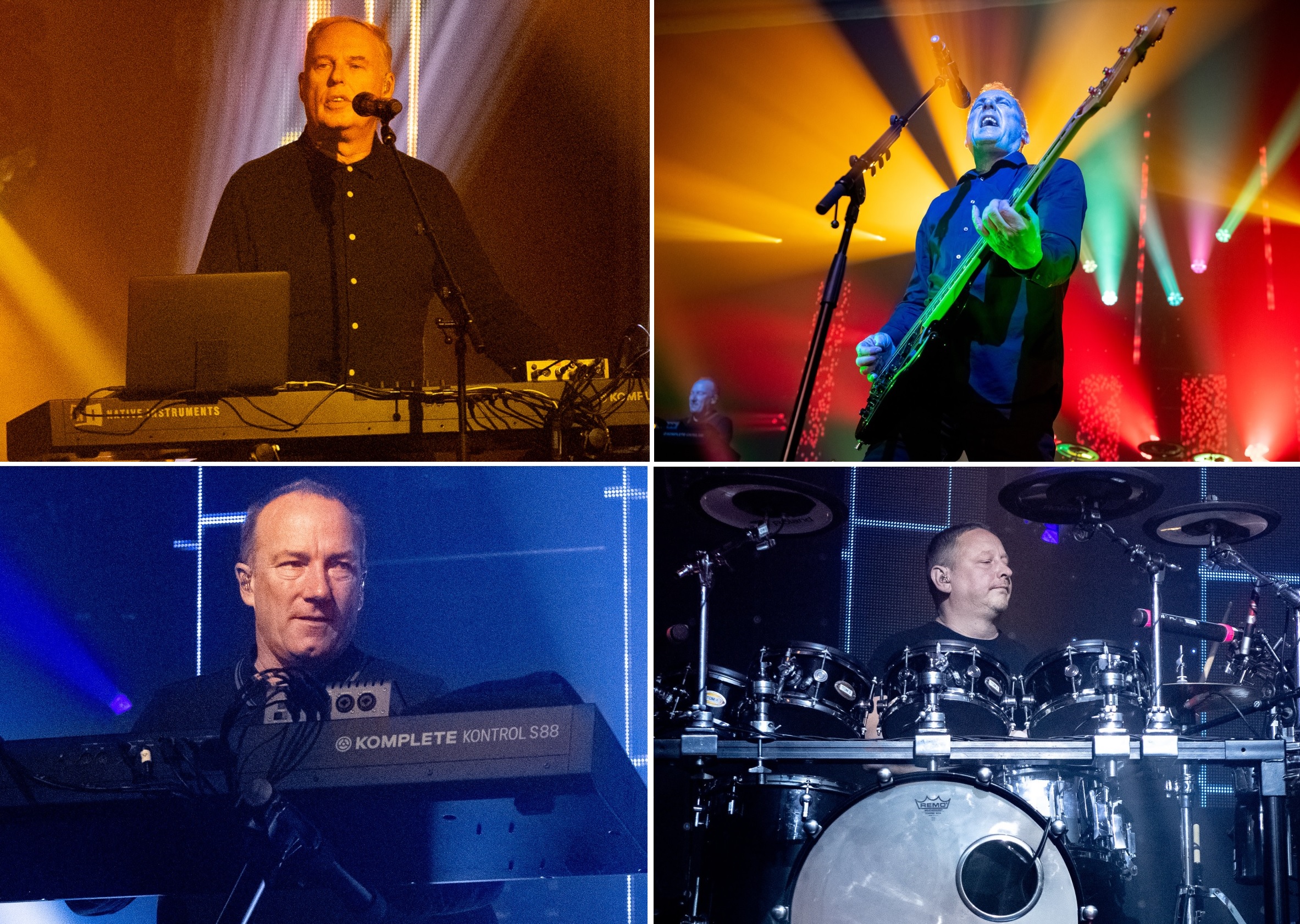 Unfortunately OMD were unable to perform all of the above 40 tunes, but hey, we got just over half of them with an impressive 21 tune set. Bang on 9pm and the lights at the De La Warr go down and the ‘Souvenir’ tour intro music kicks off. The first thing you notice is that the sound is very crisp indeed and the graphics on the back of the stage are really clear. Anticipation is high and the crowd this evening are really up for it and I mean seriously UP for it! I’m not sure how there was a mass collective euphoria spread throughout this mighty fine building, but it was also the case for tonight’s support act.

On stroll Andy McCluskey and Paul Humphreys with their chums Martin Cooper and Stuart Kershaw, the crowd erupts! Blimey, there’s a special vibe here tonight, which is not often encountered. The band immediately pick up on this and Humphreys says “And that’s why we have been looking forward to this gig!”.

They start with ‘Stanlow’, which was delivered with bags of emotion and at the time of its release in 1980 was my favourite song by anyone for a month or so. It is so dramatic that one would think that they would end the set with it instead. After the tune we are told that we were “the loudest audience of the tour last time”, with McCluskey also adding later on in the set “We were looking forward to coming back here and you have not disappointed us”. Plus at the very end of the gig they said “We will be back!”. So Brighton OMD fans, there you have it, if you want to see your fave band, then Bexhill’s De La Warr will be the place to be!

After ‘Stanlow’ we are delivered ‘Isotype’ from their last studio album, 2017’s ‘The Punishment Of Luxury’. This album and its predecessor 2013’s ‘English Electric’ are honestly equally as good as any of their first five albums! So if you love their early albums and have not yet bought these latest two, then do yourself a favour!

Next track was ‘Messages’, which if anyone forced me to choose just one OMD tune, then after much deliberation I would have to finally pick this one and especially the 10” vinyl version.

A few tunes in and ‘History Of Modern (Part 1)’ arrived and the crowd were in a mass jumping frenzy after being encouraged to do so by McCluskey. Pogoing at an OMD gig, surely not? YEP! The punters were also mass clapping during ‘Joan Of Arc’, which would certainly rival the Icelandic national football team fans. 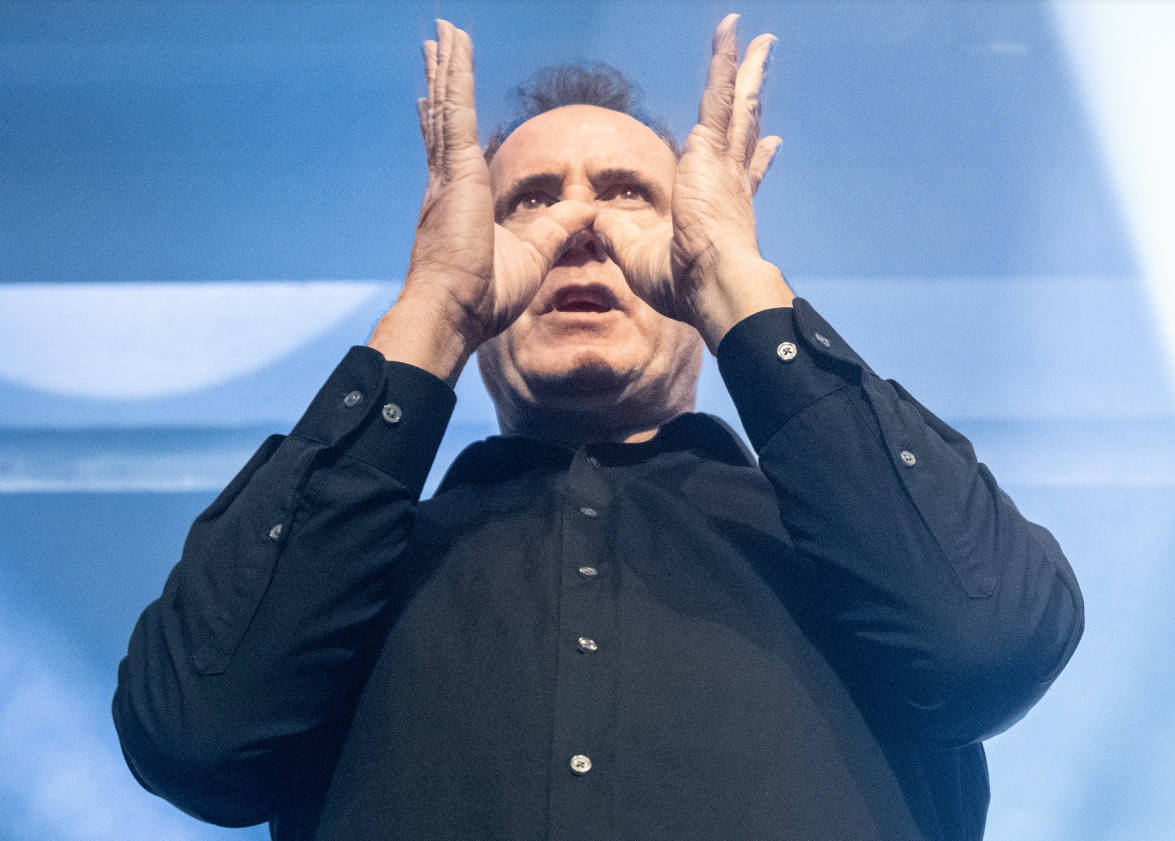 McCluskey and the guys came to the front of the stage in order to perform ‘Almost’ and ‘Statues’ on the drum pads etc and he reminded us that it was their 40th anniversary, but was cut short by the crowd singing an en masse ‘Happy Birthday’, which was a lovely touch. ‘Statues’ was astounding and was my colleague Martin’s pick of the night.

It was here that McCluskey told us that he was originally inspired back in the day by the first two lines of ‘Camera Camera’ by The Teardrop Explodes. This tune was the b-side of their first single titled ‘Sleeping Gas’ from 1979 and was released on Liverpool’s Zoo Records which was founded by none other than the future KLF member ‘Bill Drummond’ with David Balfe, who was The Teardrop Explodes keyboardist and was later famed for signing Blur and for being the subject of their first number one hit, ‘Country House’. I guess you are wondering what those two lines are? Here you go: “A red car, and a green car; And I snap them”.

Whilst we are talking about musical influences and being inspired by bands debut single b-sides, McCluskey informed us that OMD’s one which was ‘Almost’ which had just had an outing this evening was indeed the inspiration of none other than Vince Clarke and on hearing it decided to form Depeche Mode. 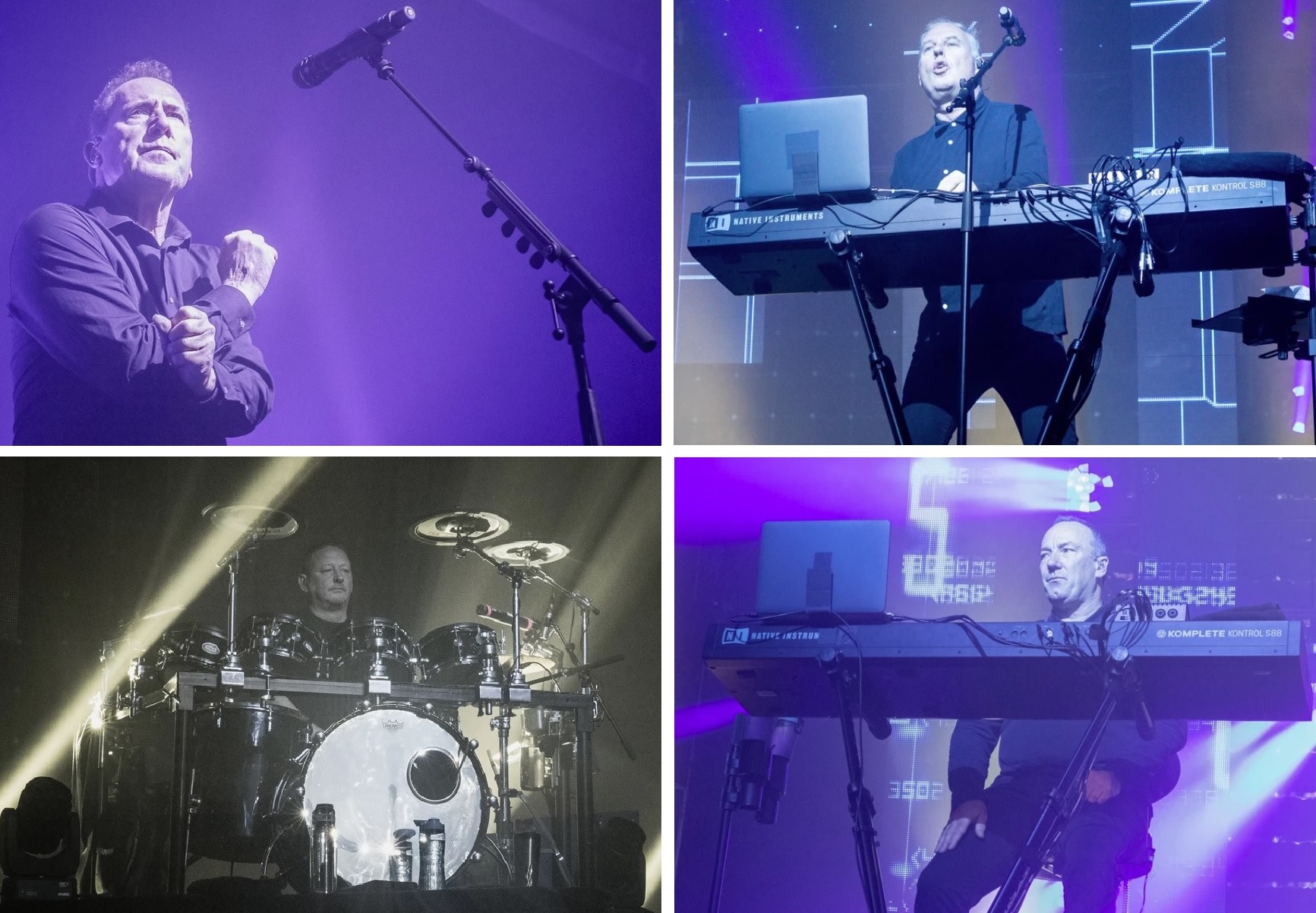 Tonight was gig 19 of 21 on the tour and so they were clearly in their rhythm by now, especially McCluskey’s dancing which was funnily enough less ‘mad dad dancing’ than it used to be. But that has been handed down to his son – more on him shortly. McCluskey Snr now uses every foot of the stage available to him and was regularly visiting us on the front left corner (his right).

Further on into the set tonight and we were treated to a fantastic rendition of 2017’s ‘The Punishment Of Luxury’, which for me might just have shaded it as tune of the night.

They played the crowd favourite ‘Enola Gay’ which was an ideal time for OMD to leave the stage prior to the three song encore. Everyone was on a high, but when they returned to perform ‘If You Leave’ from the 1986 ‘Pretty In Pink’ film soundtrack album and ‘Pandora’s Box’ from the 1991 ‘Sugar Tax’ album, the response had waned a bit. I would have seriously much preferred the awesome ‘Metroland’ from 2013’s ‘English Electric’ album and ‘Red Frame/White Light’ from their debut self-titled 1980 album, especially as there was a decent red t-shirt referring to the track on their merch stall and they didn’t even play it!

They bowed out, with the only way that they dare and played their debut single ‘Electricity’ from 1979 which McCluskey told us was actually written in 1976! It was a terrific night and I would surmise that it will be a big talking point in and around East Sussex over the next few days.

For more information on OMD, visit www.omd.uk.com and snap up your OMD merch at store.omd.uk.com 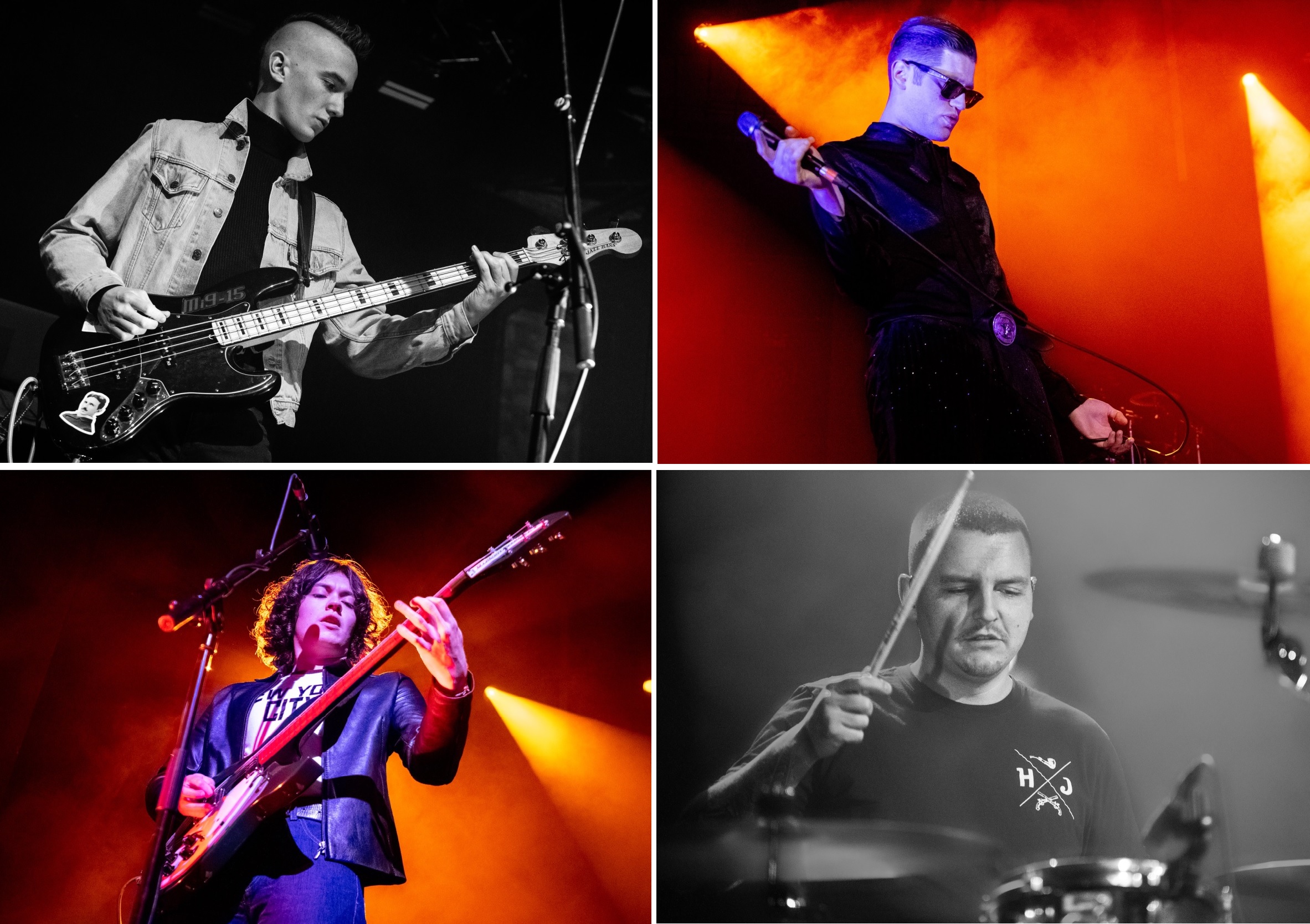 Support this evening came from young Liverpool quartet MiG 15, who are sparkly trousered and cool shades wearing vocalist Adam Bray, guitarist James Morris, drummer Martin Gordon and on bass none other than one James McCluskey. Yes that’s right, he is McCluskey Jr, but at the time of their performance, I would guess that virtually everyone in the crowd was unaware of this until dad informed the crowd during the OMD set that his mohican haired son had taken up his crazy dancing style.

The crowd warmed to them immediately and McCluskey Jr even said during their set “Yeah we’ll take that” in reference to the big applause they received. Clearly they were going down well, despite the only real keyboards sounds were as part of drummer Martin’s kit as he had a laptop on the go. They were not as synthy as OMD’s support last time here which was Tiny Magnetic Pets who were great! MiG 15 live are different altogether. It’s difficult to pin them down to any particular style, but The Editors kept springing to mind during their set.

MiG 15 released their 4 track ‘Bite The Bullet’ EP last month (which sounds more electronic than they did this evening) and they certainly did bite the bullet tonight, especially with Adam’s engagingly confident address of the crowd as he strutted around as if he owned the place. He was brought down a peg or too by a lady screaming at him from the crowd demanding that he put his shades back on, when he took them off near the end of their set. Clearly Adam was more appealing to her with them on!

And would you believe it, but for me their standout song was none other than the b-side of their debut single which was their slowest track and one that reminded me of a mixture of Richard Hawley and Roy Orbison. Even my mate Mark up in the balcony had also picked up on the Roy Orbison sound, when we discussed them during the interval.

Find out more at www.mig15.co.uk 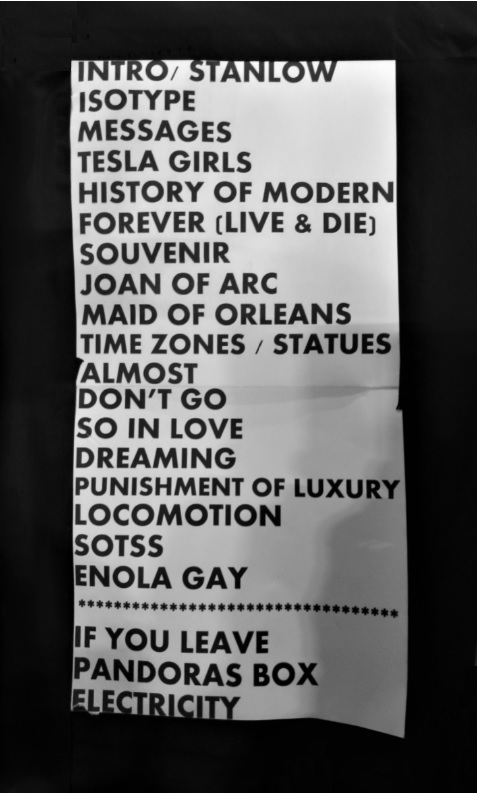 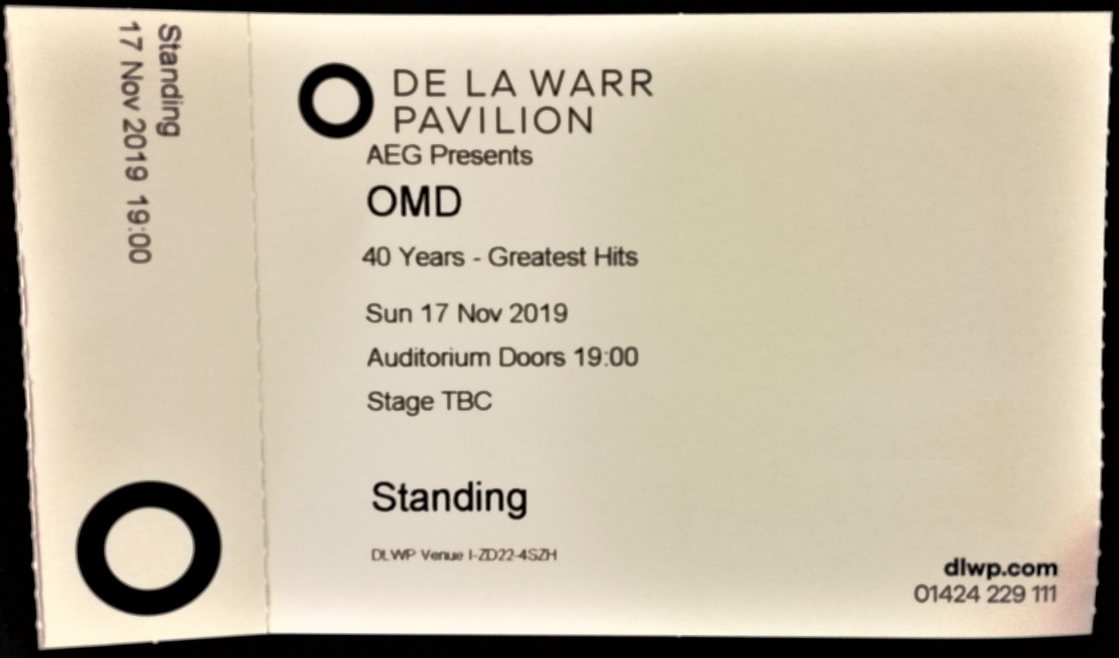 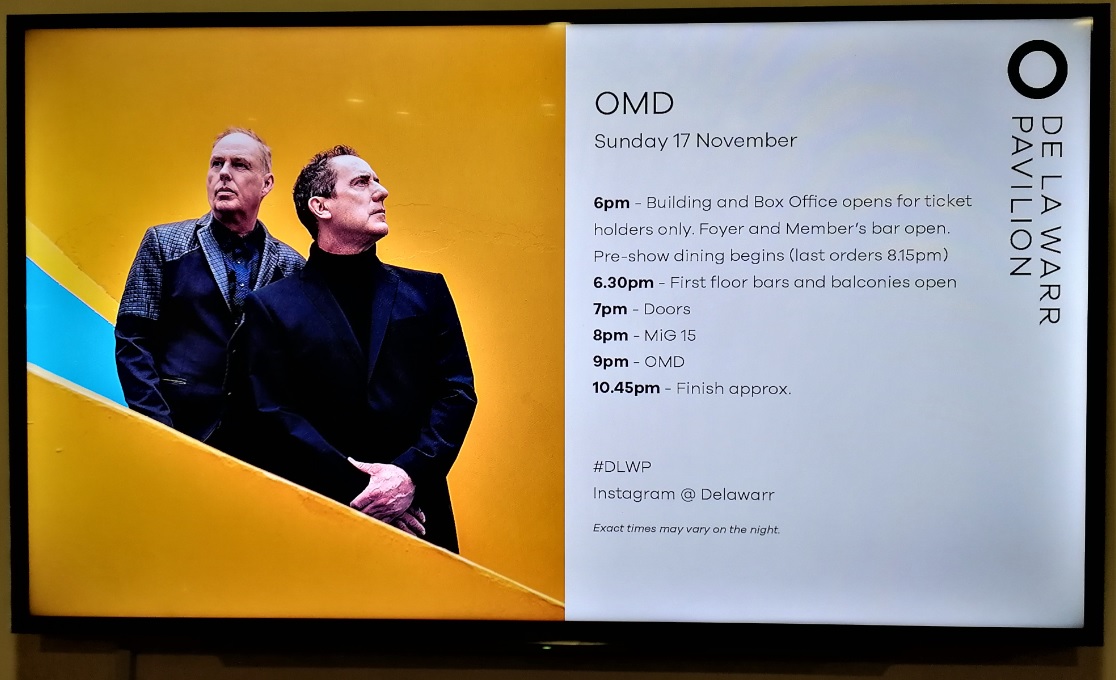 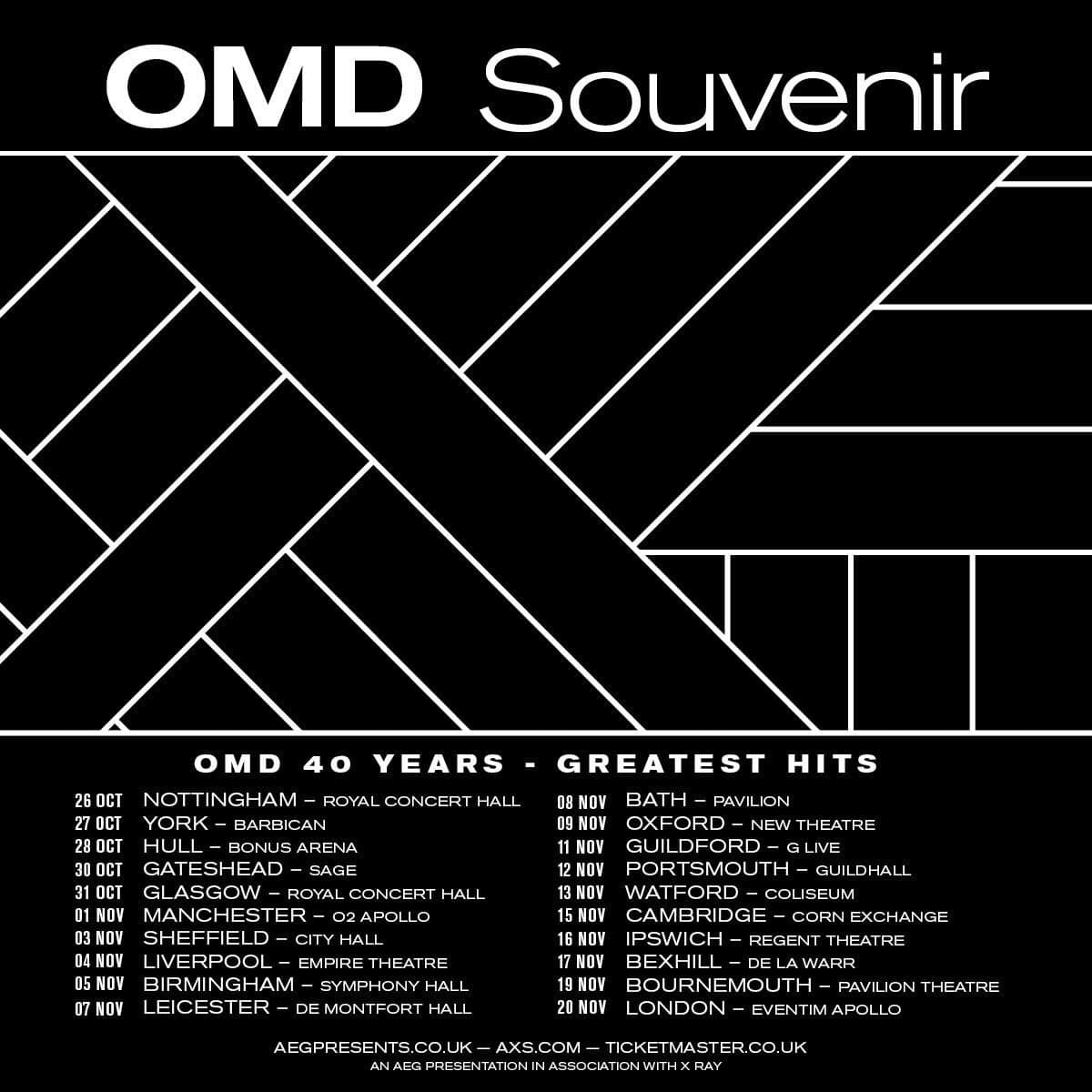 UK leg of the tour flyer