Brighton and Hove ‘shines a light’ for Europe

Brighton and Hove for Europe organised a vigil last night (Friday 31 January) next to the Peace Statue on Hove Lawns as a simple moment to remember Britain’s contribution to the European Union and a solemn moment for people to come together to say goodbye. 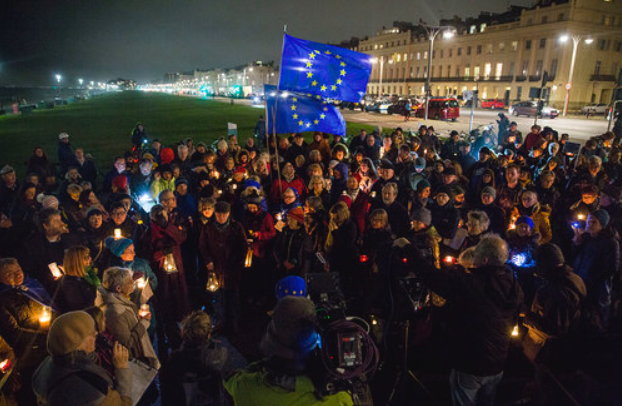 The Brexit vigil at the Peace Statue – Picture by David McHugh

The crowd sang Beethoven’s Ode to Joy and held hands to sing Auld Lang Syne as they did in the European Parliament on Tuesday and the council chamber at Hove Town Hall on Thursday night.

Caroline Lucas said in a statement: “This is a historic day, whether you voted to leave the EU or to remain.

“And our future will be judged by how we respond now to this moment. I want to be honest. My heart is breaking.

“Of course, like all institutions, the EU has its flaws – but for me it has always stood for ambition, courage and vision.

“This is what helped us emerge from the rubble and destruction of the Second World War into a country that’s been at peace with its neighbours ever since – a miracle few would have dreamed possible when the bombs were raining down.

“And ambition, courage and vision are what we still have in common. We will need them all to rise to the greatest challenge we face today – the climate emergency.

“Only by working co-operatively with our closest neighbours – as well as with those further afield – will we be able to take the urgent and ambitious action the science demands to prevent the worst of the climate crisis. And we need the vision to completely transform our economic system.

“To work in harmony with nature. To leave behind a world where weapons and money can go anywhere but refugees are vilified and compassion chased out of town. And we need climate justice to go hand in hand with social justice.

“The Leave vote was a howl of rage at a status quo in this country that is intolerable for huge numbers of people. The social contract is broken and the power game is rigged. We need the vision to build a democratic consensus about changing that, together, for good.

“The potential power of our collective action demands that we reach out, with courage, to those from whom we have become so dangerously divided. Bravely build bridges in our communities and around the world, not burn them.

“We live in turbulent times. The political tides are unpredictable. The real tides are rising. Far-right populism is once more stoking fear, division and despair.

“The future has never felt so uncertain. Yet if Brexit has taught us anything, it’s that what we previously imagined unthinkable is in fact possible. 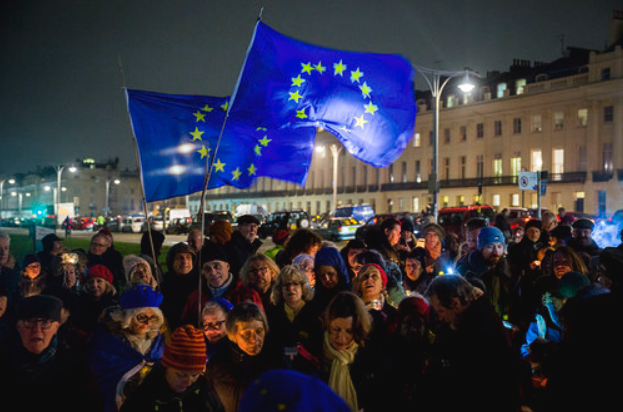 “We may have lost the battle to keep Britain in the EU but what kind of endings do we believe in?

“I believe in those that are also beginnings. And the struggle for a compassionate, fair, green, peaceful, future begins anew right now.

“In the love and sadness so many of us are feeling right now, we affirm, rather than deny our fellowship with Europe and the world.

“We begin again knowing hope is always more powerful than hate, that our common humanity matters more than what divides us, that ambition, vision and courage call.”

Hove MP Peter Kyle was also unable to attend the Peace Vigil. However, he said: “All of us are united in sadness just as we were united in our fight to remain in the EU.

“Thanks to you all I remain an optimist. Together we’ve seen too much of the good in humanity in our campaigning to emerge from this battle as pessimists. 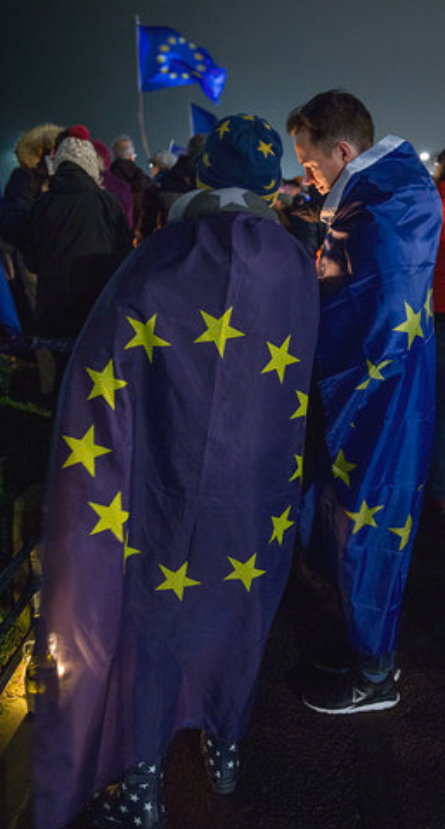 “The political landscape hasn’t stopped evolving because we’ve now left the EU. Quite the opposite. The months ahead will give us so many opportunities to set out our vision for a better Britain. Better than the one Brexiteers could ever imagine.

She said: “I am proud of being part of ‘the barmiest council’ in Britain.

“I can be British and I am European. I don’t think being British is the only thing about me.” 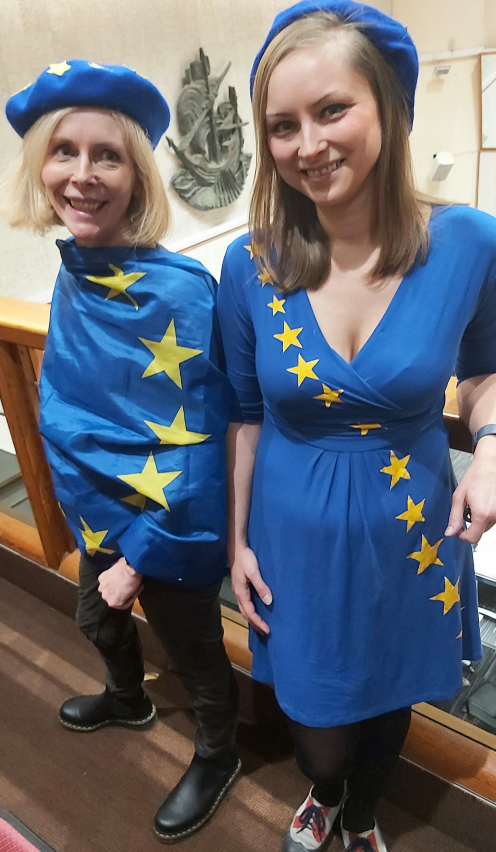 Councillor Hill said that she was pleased that people had gathered near the Peace Statue because it reminded her of the Statue of Liberty in New York which should be a symbol of opportunity. She said: “You give something and you get something back.”

People often told her that migrants only took something away. To Ms Hill, nationalism and populism had never made sense. She added: “You have to celebrate our differences instead of being afraid of them. We have to live those values and never shy away from having a difficult conversation. We should have talked about Europe. We should have challenged populism. If you do not fight for the things we love, you will lose them.”

Green councillor Leo Littman said: “So, it’s Brexit day. Britain has ‘taken back control’. An easy slogan to shout but what does it mean?

“Even Brexit Party MEPs belatedly realised that without a voice in the European Parliament we are now simply rule-takers, no longer rule-makers. In other words, we’ve given up control we once had. But surely, now we can now control our own destiny? Hardly. 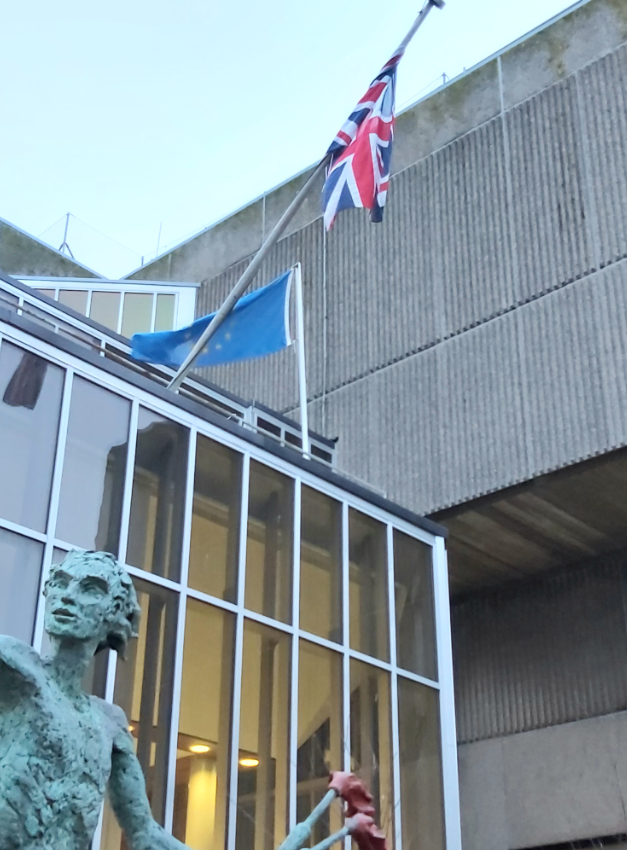 “Britain is almost certainly the first country in history to impose sanctions on itself.

“Britain alone cannot hope to stand against the ongoing climate and biodiversity crises. We need to work together.

“Britain alone cannot uphold worker’s rights, consumers’ rights, the right to free movement, the rights of refugees to reunite with their families, animal rights or the rights of the natural world. We need to work together.

“Britain alone cannot create a fairer world where resources are shared equally between people, nations and across generations, including those not yet born. We need to work together.

“Fundamentally, we need to take back control from those who have temporarily grabbed it and share it with each other, with our European cousins, with the rest of humanity and the rest of the natural world.

“Only that way can we be genuinely free and look to a safe future we can all share.

“The first step towards that is maintaining as strong a relationship with the EU as possible.

“The next step is, of course, rejoining and re-taking our rightful place at the heart of Europe.”

Roz Scott is a freelance journalist and copywriter. You can subscribe to her blog at www.rozscott.com.