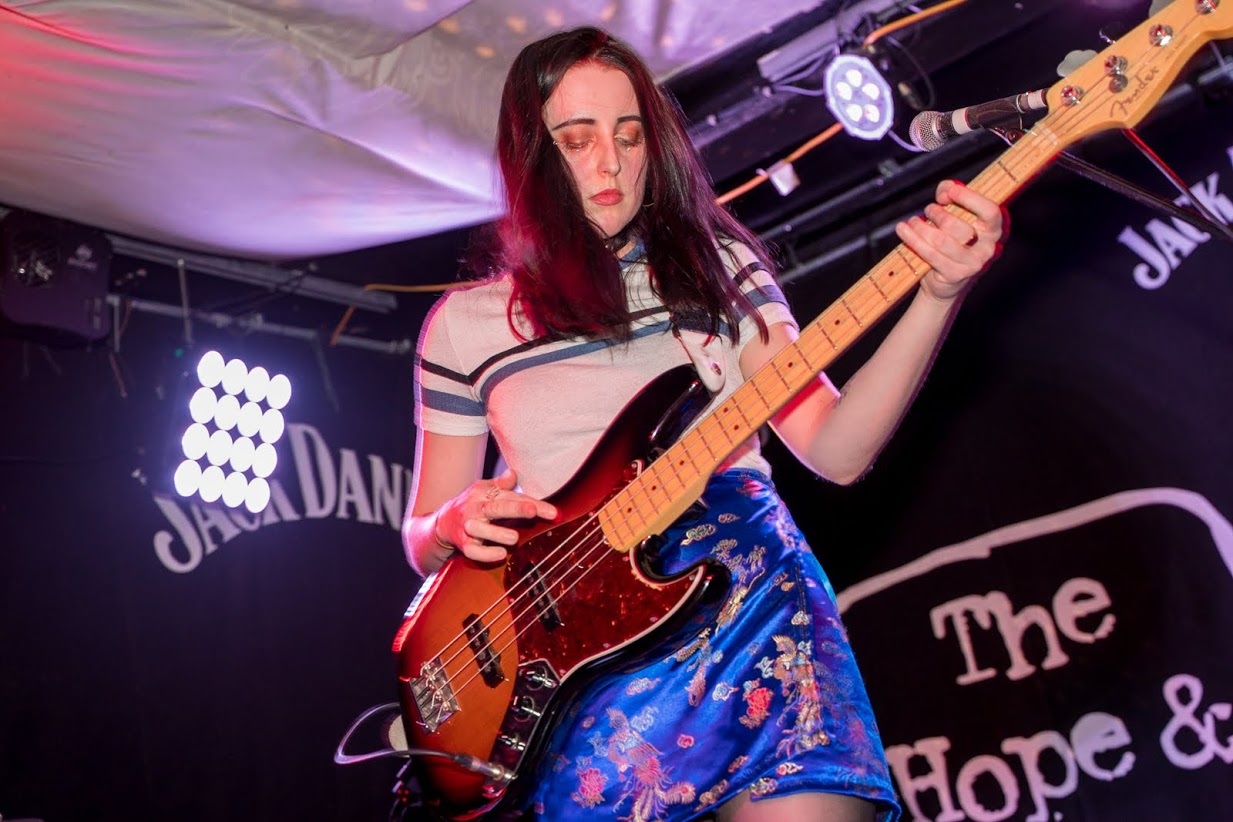 We headed off into Brighton this evening to grab a listen to local promoters Stoked And Broke’s first ever concert upstairs at The Hope & Ruin on Queens Road, Brighton. On the bill tonight were four acts, they were Demonstrations, Toyz, Monakis and Nagasaki Dog.

We nearly always endeavour to get to venues in time in order to see all of the acts on the bill and this evening was no exception. We swung open the doors to find the upstairs room a little quiet, as many punters were still downstairs in the bar area or simply hadn’t yet arrived. Maybe the Coronavirus had kept a few souls away? Time would tell. 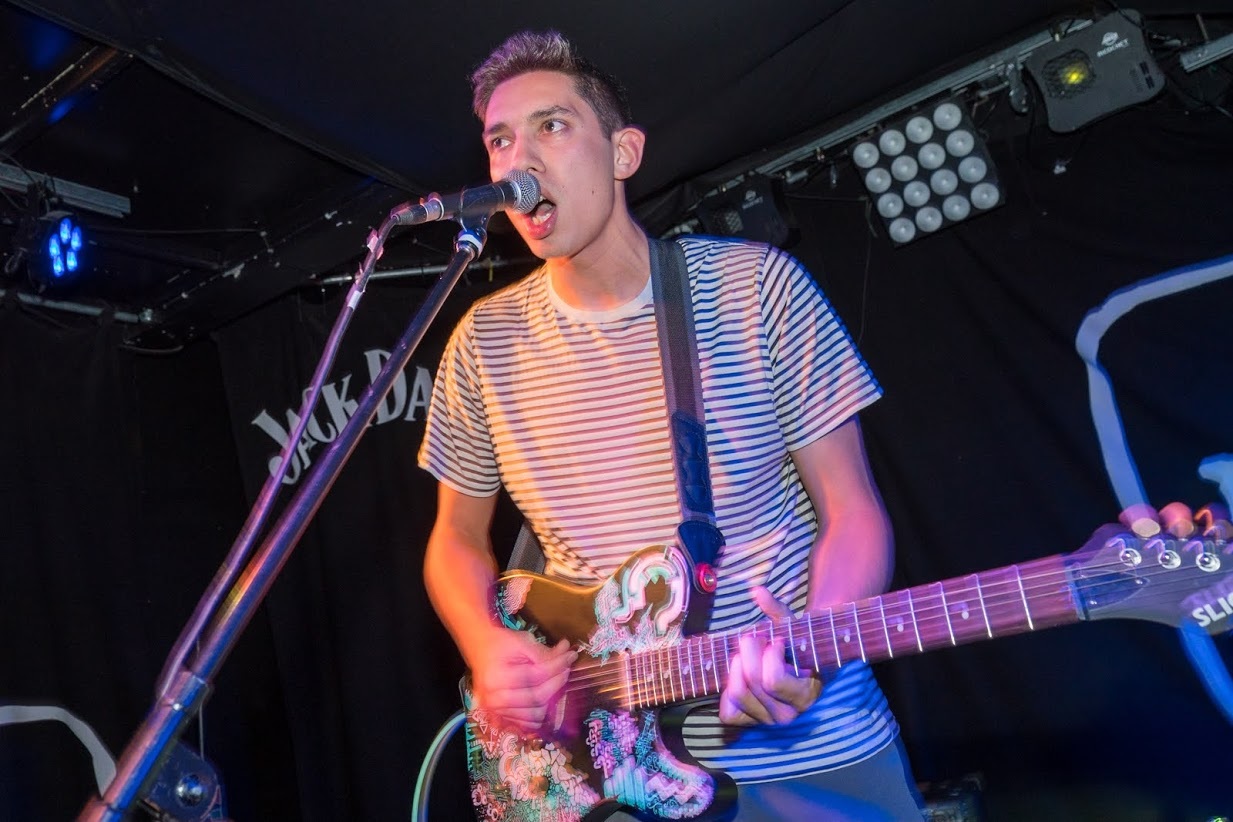 By the time the first act took to the stage at 8:07pm the room was heading towards half full. First up was Nagasaki Dog which is the solo project from the former Bad Girls frontman. You can check out the Bad Girls material on Soundcloud.

Nagasaki Dog took to the stage with his electric guitar and just got on with it, singing his heart out with his eyes mainly closed. The longer his set went on, the more in confidence he grew. It’s fair to say that he gave it his all, something which was picked up by the punters and their cheers and applause was dutifully delivered. One or two times during his set, he did vocally sound like Richard Hawley, whom I have a soft spot for. Towards the end of his 28 minute set, he made good use of the delay pedals. At 8:35pm he was done. 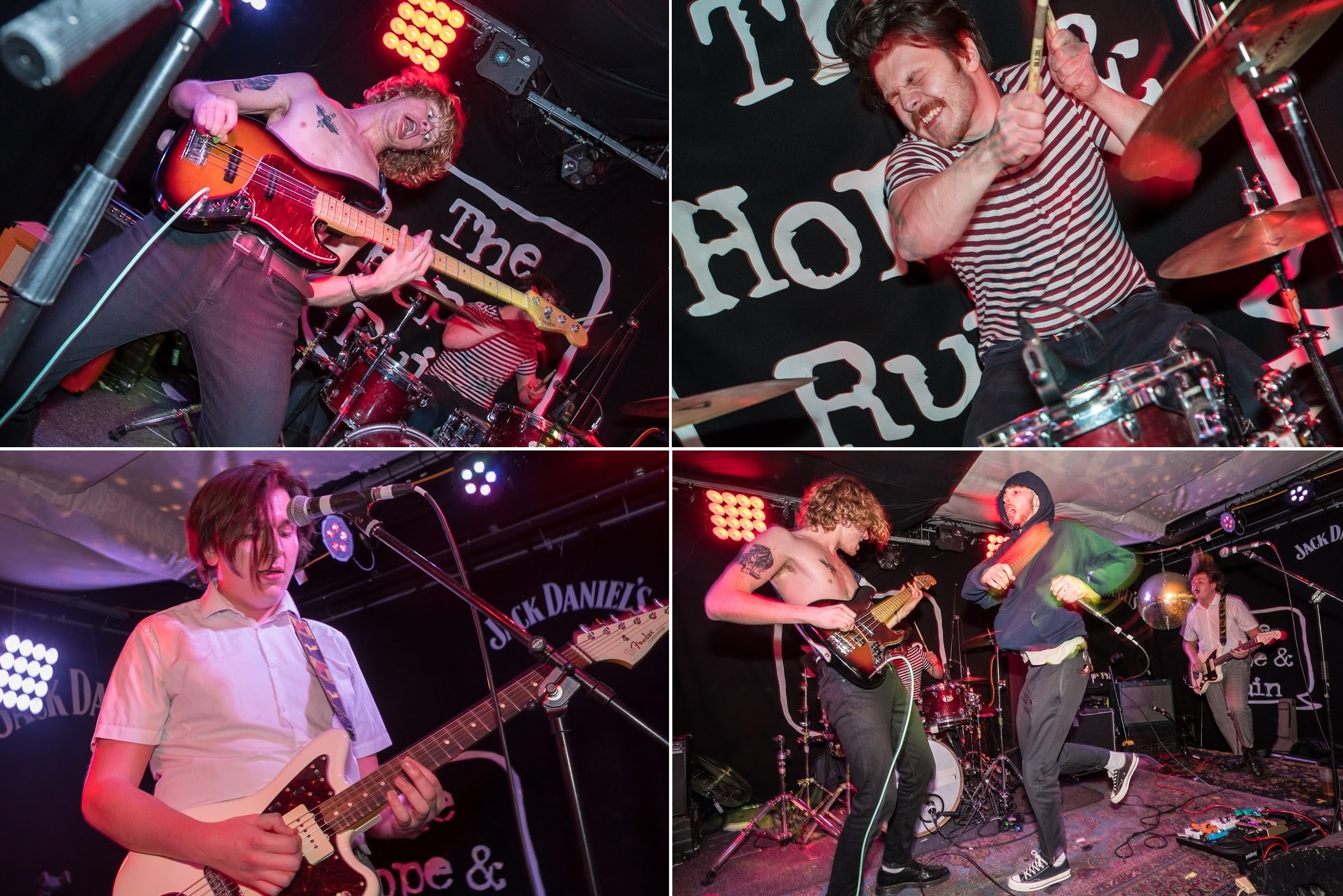 With a mere 12 minute gap and we were off again with the second act of the night, who were Monakis (pronounced ‘moaner-kiss’). This Brighton based trio consists of James Porter (bass/vox), Aaron Butler (guitar/vox) and Joe Mctaggart (drums) and they performed eight self penned corkers during their 31 minute set.

They opened with their debut single release ‘Animosity’ and from the very word go, they treated us lucky punters to a blend of IDLES meets traditional punk rock. James’ vocals were delivered with ear-splitting ferocity and he certainly knows how to throw a pose or two. As per usual his top was not necessary during the performance. Unusually, the top string of his bass came out and so he was momentarily down to just three chords. A fact that he didn’t shy away from, and wrapped the errant string around his back until the number had ended. Jess from headliners Demonstrations came to the rescue and lent James her dark sunburst Jazz bass, which had a different, dare I say more meaty sound.

Aaron occasionally shares vocal duties in this exciting new prospect, with tonight possibly being only their seventh gig, and Joe’s drumming tonight was really quite outstanding, as he was knocking five bells out of it. Already they have mastered their instruments and have bounds of confidence, especially James.

They were joined on stage during their final number ‘Driptease’ by one of their mates, who took over vocals duty. Monakis are for fans of IDLES, Fontaines D.C, THUMPER, DITZ, BlackWaters and Wife Swap USA. 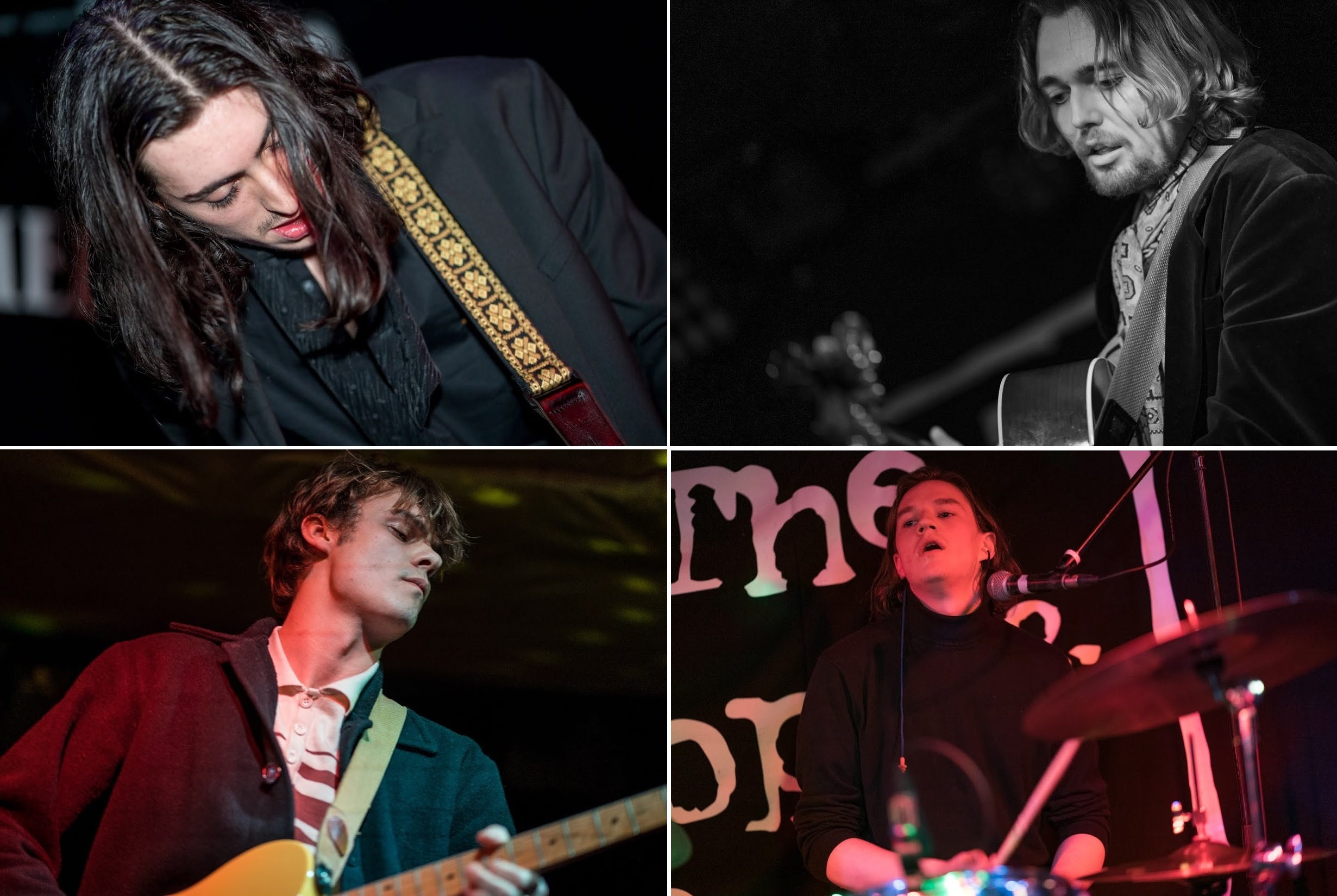 Just sixteen minutes later (at 9:34pm) and it was now time for the Brighton based sextet known as Toyz to work their way through their handful of songs during their 29 minute set. This all male combo have gravitated to Brighton from far and wide including Zürich, Bergisch Gladbach near Cologne, Hartlepool, Maidstone, Portsmouth and Battle.

Toyz were the only band on the bill this evening that I hadn’t seen play live before and I’m not currently aware of any other Brighton based acts that sound similar to these guys. They sound like a band out of time and sync with everyone else, but as we know music works in cycles, and so they might as well be ahead of the game instead. They have a truly nostalgic vibe going down and Callum’s vocals often wander into latter John Lennon after the Beatles territory.

Their sound is currently a clash of styles and you are not quite sure what you are going to be delivered next, but they reminded me of The Eagles at times and I also picked up on the ‘Young Americans’ David Bowie nod too. Rob was at one stage almost mimicking The Doors ‘Riders On The Storm’ on his Korg and other keyboard. But I tell you what lad, that blue crate for the Korg has to go, not a good look!

Toyz songs are in depth pieces and a million miles away from three minute pop songs, I would even use the word ‘prog rock’, to pigeonhole them if needed to be. At three minutes past ten, they were done. 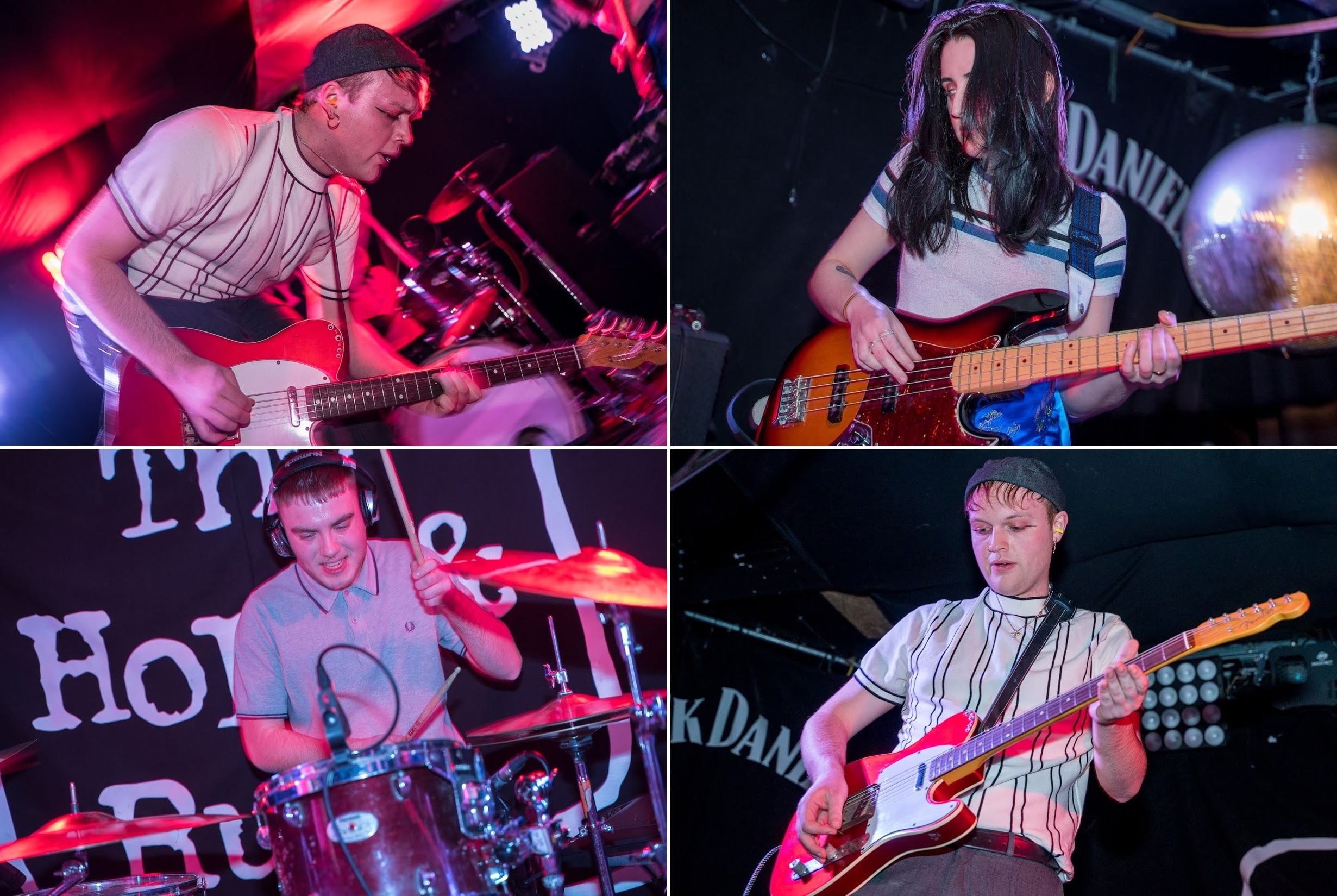 Fifteen minutes later at 10:18pm it was time for Demonstrations to grace the stage on their new single launch event. ‘Clang!’ is the title of this and it’s now available on all streaming platforms
iTunes / Apple Music / Bandcamp / Soundcloud / Spotify

Demonstrations are a guitar led trio with an 80’s indie vibe. They are Brighton and London based and consists of Luke (vocals/guitar), Jess (bass) and Callum (drums/programming).

Luke certainly has the presence of a frontman and during the beginning of their set, I was endeavouring to ascertain who he sounded like. I eventually concluded that it was a chap called Dick Witts who along with Andy Wilson and Paul Mahoney were called The Passage. They recorded the wonderfully catchy ‘XOYO’ single that came out in January 1982 on the legendary Cherry Red label, and it’s the vocals on ‘XOYO’ that Luke sounds like.

The Demonstrations look is slightly evolving at the moment and Luke has now got a guyliner Lauren Mayberry eye makeup look going on and Jess’s EBM/Goth look has this evening been slightly toned down, but she still affords that modern bass girl look.

Although difficult to pinpoint, the Demonstrations sound was a decent blend of a modern take on indie post punk coupled with a slight noise rock element. I could certainly hear the bass sounds, which were heading towards giving Jah Wobble a run for his money, and there were elements of Joy Division and Iggy Pop. Although my colleague Richie made the observation in his review of another performance by the band, stating “It reminds me of the glory days of XTC”.

This evening the band worked their way through a ten song set, that obviously included the new single, which was unleashed mid set. 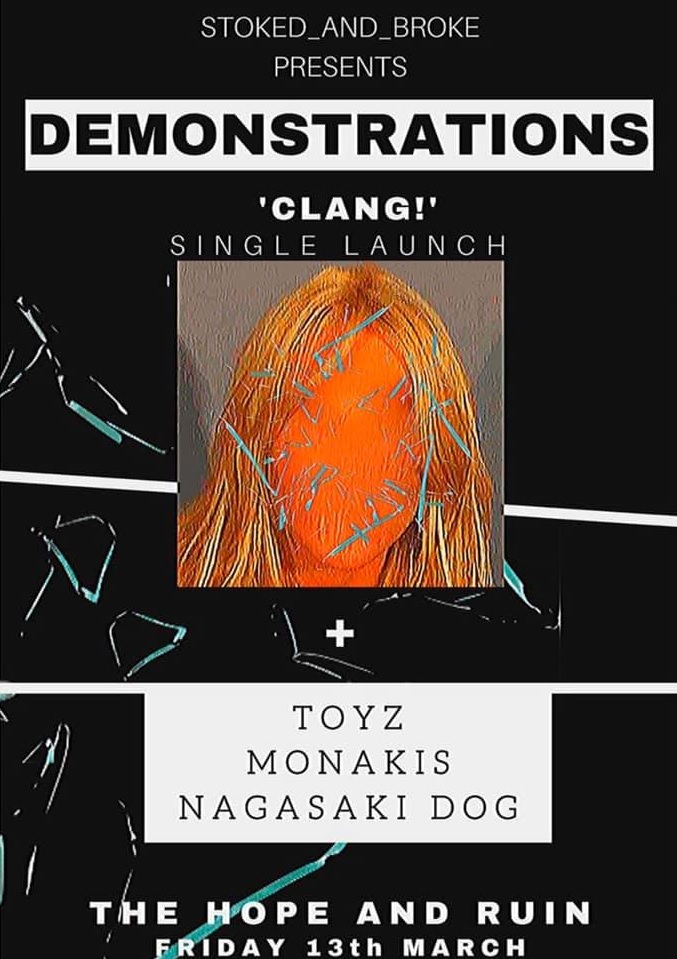