A planning battle looms at the eastern end of Shoreham Harbour where a developer wants to invest £40 million in jobs and homes.

But the scheme, known as Hove Gateway, has already galvanised neighbours to speak out, saying that the buildings would be overbearing and out of place.

The company behind the latest plans, Synergy Developments, could make use of an existing planning permission for a series of six blocks of flats on the site, up to six storeys high.

Instead, it appears to be trying to address some of the objections to the earlier scheme, known as PortZed, while responding to official concerns about Brighton and Hove’s housing supply shortfall.

The plot occupies a narrow strip of land between the A259 Kingsway and Basin Road North by Aldrington Basin at the eastern end of Shoreham Harbour.

It includes the Magnet kitchens showroom which would make way for 172 homes, a roof-top restaurant, offices, gym and Brighton and Hove’s first new seafront square for more than a century.

But the Kingsway and West Hove Residents’ Association (KAWHRA) said that the two proposed buildings would be too bulky, too high and would clash with the long-established character of the area.

It would be more suited to East Croydon than West Hove.

But, with work having formally started after planning permission was granted for PortZed, and the principle of homes and businesses on the site already established, opponents’ options look limited.

Synergy Developments said: “We are keen to hear the views of local residents and businesses on our proposals before submitting any new planning application.

“Gateway Hove represents a significant opportunity to develop this outdated and under-used site into a first-class, mixed-use regeneration scheme.

“Our revised proposals will deliver more homes, more office space and a visitor centre with gallery space for local artists.

“Gateway Hove has evolved from an existing local project, known as PortZed, which secured planning permission from Brighton and Hove City Council in 2014 for a mixed-use residential and commercial development.”

The developer would expect to make payments to the council, known as section 106 contributions, for local education, health care and transport projects.

And the scheme was expected to contribute £573,000 in new council tax and business rate payments towards local services.

It was also estimated to be likely to inject a further £2.4 million into the local economy each year. 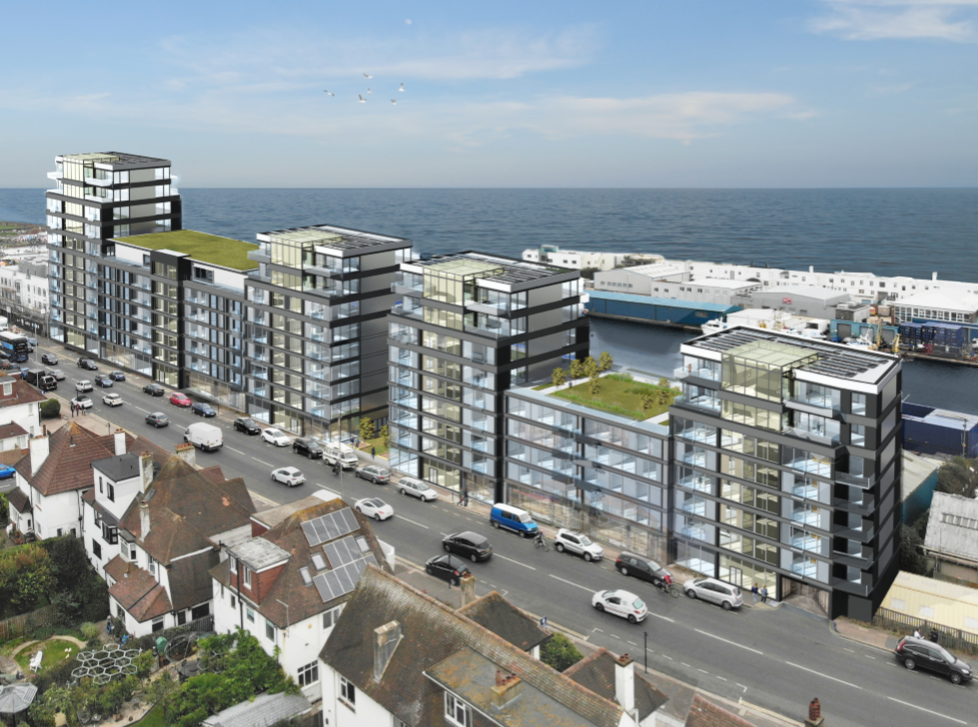 After consulting the public and local organisations, Synergy said that it hoped to submit a planning application in late summer or early autumn.

If planning permission is granted, work could start next spring and be completed by late summer or autumn 2022.

KAWHRA chair Peter Reeves said: “We welcome developments that are well- designed and appropriate to the surroundings.

“While this proposal offers some appealing features, the feedback from local residents is overwhelmingly that it falls well below fulfilling either criterion.

“It is regarded as far too bulky, too high and clashing with the long-established character of not just the neighbourhood but West Hove generally.

“It would also seriously overshadow homes opposite for a large part of the year.

“Described as a Gateway, its ‘office block’ appearance is more suited to a dual carriageway into East Croydon. It is simply overbearing and out-of-place.”

Conservative councillor Robert Nemeth, who represents Wish ward, said: “There has already been much discussion among residents about this scheme as Councillor Peltzer Dunn and I shared details at an early stage in this pre-application process.

“While it’s undoubtedly the case that many will be against, we do appreciate the opportunity to comment and look forward to much changing before a planning application is submitted.”