Councillors have granted planning permission for a family home in Brighton to be turned into a shared house despite having reservations. 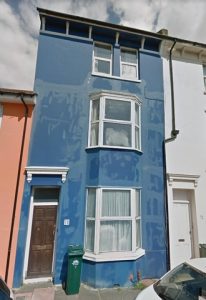 Two ward councillors – Steph Powell and David Gibson – wrote to planners with concerns about the “creeping” growth in the number of houses in multiple occupation (HMOs).

The pair, who represent Hanover and Elm Grove, objected to the proposal for the property at 71 Albion Hill, Brighton.

Their concerns were shared at a “virtual” meeting of Brighton and Hove City Council’s Planning Committee yesterday (Wednesday 5 August).

An official read out their letter which said that a “creep” of unlicensed HMOs was having a “detrimental impact” on the area by “unbalancing” the local community.

The council’s policy is that plans for a shared house will be approved provided that no more than 10 per cent of homes within 50 metres are already HMOs.

Independent councillor Bridget Fishleigh asked how the number of shared houses in an area was calculated and was told that planners checked existing permissions, licences and council tax records.

She asked if officers used the electoral roll and was told that they did not.

Councillor Fishleigh said: “If I represented this area then I would go knocking on everyone’s door to find out who was an HMO so I would have evidence.”

“I agree with the councillors. It is a creeping thing. Whenever we come back to residents, they always say there are more HMOs than the council says there are.”

Labour councillor Nick Childs was the only councillor to vote against the plans, with Councillor Fishleigh abstaining.

He said: “I do know the area very well and I think there’ll be an impact by turning it into an HMO.

“There’ll be an impact on parking and on rubbish, which is already a serious issue in the area.

“I also think it increases the risk of noise pollution as well.”

The plans were submitted by Regency Properties Brighton, owned by Rovertos and Ermylos Savvides, who made their name locally running the Regency fish restaurant on Brighton seafront.