A seafront chip shop has been granted a licence to sell alcohol but only to customers who are seated and eating a meal.

The Best Fish and Chips, in King’s Road, Brighton, was successful with its application to add beer and wine to the restaurant menu until 10pm.

But owner Ali Akbar’s hopes of being able to sell takeaway alcoholic drinks until 2am were thwarted by a Brighton and Hove City Council licensing panel.

Mr Akbar’s shop has a long-standing late-night takeaway licence and closes at 3am Monday to Friday and at 4am on Saturdays and Sundays.

At the licensing panel hearing, on Friday 20 November, Mr Akbar said that he wanted to offer a convenience store-style service with sandwiches, chocolate and crisps, alongside mainstream beers, cider and wine.

But the council’s licensing department and Sussex Police opposed the granting of an “off-sales” licence.

They said that the takeaway was in the busy central area of Brighton and Hove where the council’s policy was to turn down proposed new off-licences, pubs and clubs to try to reduce crime and disorder.

At the “virtual” panel hearing, the police said that they were concerned about high levels of drink-related crime in the area at all times of the day and night.

The force was also concerned about people drinking on the beach.

Mr Akbar did not think that he would add to the problems in the area as he had owned his shop for more than 20 years without any issues.

But when the panel gave its verdict, it said that it did not believe that there were exceptional circumstances to allow for off-sales. 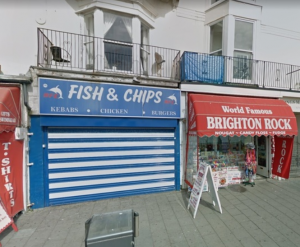 The panel said: “It was confirmed by the police that the levels of crime and disorder and issues in the area have remained steady or increased regardless of any perceived closure or change in the number of licensed premises and the area still attracts a high number of tourists.

“The panel considers that the applicant has not appreciated the likely negative impact of introducing further off-sales of alcohol into this area and agrees with the police in this respect.

“The sale of alcohol for consumption off the premises is therefore refused.

“The panel does consider, however, that a limited licence for the sale of alcohol on the premises with appropriate conditions can be granted without negative cumulative impact.”

Customers buying an alcoholic drink with their fish and chips must be served by waiting staff and seated at tables.