The coronavirus rules appear to be preventing councillors from carrying out site visits before making decisions about planning applications.

The challenges arose after concerns were raised by a councillor and an objector to plans that they believe would affect public safety.

Councillors voted to carry out a site visit to Clarendon Villas, Hove, early last month but, with a decision due today, it has emerged that no visit was organised.

Brighton and Hove was placed under “tier 4” restrictions from Boxing Day and in the new year the third national lockdown tightened the rules further.

Labour councillor Gary Wilkinson, who represents Central Hove ward, wrote to Brighton and Hove City Council – as did a neighbour who has been speaking for other neighbours concerned about the plans.

Councillor Wilkinson said: “My concern is that despite the committee requesting a visit, one had not been arranged.

“Certainly, one had not occurred or been arranged prior to my asking on Friday 8 January. Otherwise, I would have been informed so.

“National lockdown rules did not roll out until early January so why did the visit not occur in December?

“Committee members were not informed until Monday 11 January that they could make an independent visit and may have been awaiting the details of a visit. If a decision had been made to not visit, why were they not informed of such?

“At worst the proposed visit may have been overlooked or best, a decision was made not to visit but committee members not informed until two days before the committee.

“This is hardly adequate time for them to arrange an independent visit.”

The neighbour, Oliver Pollard, is among 21 objectors to plans to build offices in place of garages behind people’s homes.

He was also concerned that, without a site visit, councillors would not have enough understanding of their safety fears. 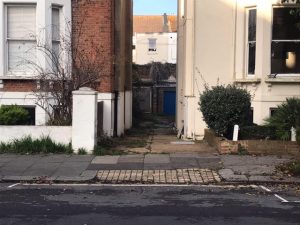 Mr Pollard said that he was surprised that a site visit did not occur last month after councillors voted for it.

He said: “In my opinion, to drive through this application without any site visit (even individual visits) is dangerous, undemocratic and sets a very worrying precedent.

“Residents are rightly furious that the councillors could be making a crucial decision without visiting the site.

“There is simply no way that councillors can appreciate how detrimental the application would be on health and safety, among other issues, without visiting the site.”

Objections from neighbours include concerns about the narrow access and the potential risk to pedestrians.

When the council’s Planning Committee let last month, members also voted for a site visit to a former church building in Park Close, Coldean, where flats are planned.

On Monday councillors were told by the planning department that they should carry out their own site visits. Several committee members said that they had gone to the sites by themselves.

Councillor Leo Littman, who chairs the Planning Committee, said that more photographs would be shown to members when they looked at the two applications to help members who had not been able to visit the sites.

The Planning Committee is due to meet at 2pm today and the meeting is scheduled to be webcast on the council website.