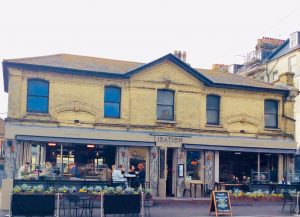 A bar in Hove can serve drinks to customers seated at tables on the pavement despite objections from neighbours.

Libation, in Victoria Grove, in Second Avenue, Hove, already has a pavement licence until September, allowing it put seats in the street.

But it was not allowed to serve alcohol to customers at the pavement tables until a Brighton and Hove City Council licensing panel gave permission.

The panel said that objectors and Labour councillor Clare Moonan, who represents Central Hove ward, had focused on the potential for drinkers to obstruct the highway.

But the bar already has a highways licence – to place tables on the pavement – and wanted to vary its alcohol licence.

If the licensing panel had turned down the application, the pavement tables could have stayed.

Libation – formerly the Tin Drum and Crafty Chooks – is part of the Day family’s Golden Lion Group, which has seven pubs across Brighton and Hove.

Golden Lion director Leo Day told the panel, on Tuesday 20 April, that he had lost out because he had played by the rules.

Had he waited a few months, he said, he would have benefited from changes to the rules to support pubs, bars, cafés and restaurants during the covid-19 pandemic.

These would have allowed him to serve alcohol to people at pavement tables without having to apply for a variation to his licence.

The panel placed conditions on Libation’s licence requiring waiter service to the tables in the street which must be cleared away by 7pm.

Customers are not permitted to stand in the area where the pavement tables are sited.

The panel, which was made up of Labour councillor Jackie O’Quinn, Green councillor Clare Rainey and Conservative councillor Dee Simson, said in its decision letter: “Overall … the panel considers that the application will not impact negatively on the area or undermine the licensing objectives.”