Councillors have urged Sussex police and crime commissioner Katy Bourne to tackle drug dealing on the housing estates in Brighton and Hove. 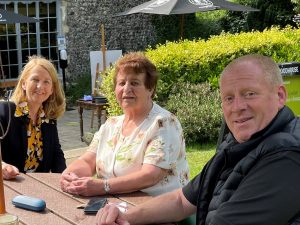 Conservative councillors Dawn Barnett and Nick Lewry said that they were aware of cases of “cuckooing” – where dealers take over the home of a vulnerable person.

And, they said, a number of violent crimes reported recently had been related to drug dealing.

They praised the police focus on county lines – with drug dealers from big cities targeting places like Brighton and Hove.

But they were concerned that drug dealing and drug taking on the outlying estates in Brighton and Hove were sometimes going on under the radar.

The pair, who represent Hangleton and Knoll on Brighton and Hove City Council, praised the way that Sussex Police had targeted town centre trouble.

But they were worried that wards like theirs could be overlooked and also set out concerns about anti-social behaviour in local parks.

They called for more patrols by police community support officers (PCSOs), especially during the evenings.

The police and crime commissioner said: “Last year, despite the restrictions from the pandemic, I consulted with councillors and parishes across the county.

“And this year, we are increasing that engagement by 300 per cent, with parish council focus groups and using online surveys targeting more urban areas.

“This continuous listening programme is a mainstay of my role so I can hear residents’ concerns first-hand and ensure they are considered by the chief constable.

“I was really pleased to be able to meet Dawn and Nick who wanted to ensure that incidents of anti-social behaviour and drug dealing in their wards were not being overlooked in favour of policing more populated areas.

“The deployment of officers will always be a decision for local police commanders and will be based on a combination of intelligence, community feedback and reassurance.

“I will ask senior officers for their assessment of anti-social behaviour and drugs issues in Hangleton and Knoll and how they are communicating police activity to community representatives.”