Phil Salt is hoping turn a one-off chance into a long-term England career after finally making his way to the national side via stopping points in Bodelwyddan, Barbados and Brighton. 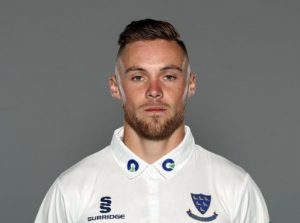 Salt was born in the Welsh town, moved with his family to the Caribbean island while still at primary school and ultimately made a name for himself after settling on the south coast with Sussex.

The 24-year-old made has been on the fringes of the England side before but remained uncapped until a coronavirus outbreak forced the entire one-day squad into isolation and saw an SOS call for last-minute replacements go out to the counties.

Despite the chaos, the untested unit has proceeded to see off a full-strength Pakistan twice in a row to claim the Royal London Series with a game to spare, Salt top-scoring with a lively 60 at Lord’s.

Retracing some of the steps from his formative years, Salt revealed he was once vying to enter the West Indian cricket pathway.

“I was born in North Wales but my dad got a job out there and we all moved over when I was about 10. He was a property developer on the west coast,” he said.

“I think I was eligible through citizenship. I spent six years there and then came back to the UK to go to boarding school. I played Barbados Under-15s but never any further. I was available for selection for the under-19 team but I didn’t get selected.

“Even if I was selected, I was going to stay and keep playing second team cricket for Sussex. At the time the way I was thinking was there’s a lot more longevity, I saw a pathway right from the very start with Sussex to come through and really build myself into the cricketer I wanted to be.”

Reflecting on his time as an adopted Bajan, he adds with a smile: “It was not quite as good as Brighton but, yes, it’s a lovely part of the world.”

As an aggressive opening batter, Salt knows he has some way to go to dislodge World Cup winning incumbents Jonny Bairstow and Jason Roy. But over the course of 54 balls at Lord’s he gave a compelling account of his potential as an understudy or eventual successor.

He struck the electric Shaheen Shah Afridi for two fours in the first five deliveries of the match and then went on a tear against Faheem Ashraf, finding the ropes four times in a single, destructive over.

It was not to imagine England’s quarantined captain Eoin Morgan – who has done more than anyone to push that kind of unfettered aggression in limited-overs cricket – nodding along at home.

He said: “Coming into the England set-up, right from the very start, it’s something that Morgs has always been crystal clear on: we take the game on, we take the positive option.”

“I sort of think it’s the blueprint of what has been so successful in 50-over cricket. Coming in it is pretty simple, I’ve got to get the boys off to a flier. That doesn’t mean it’s all big shots all over the place, a good ball is still a good ball and you have to play it with respect. But if you get any width or any length I am definitely looking to jump all over that.