Work to stabilise a railway cutting in Hove means that some trains will be rerouted and others replaced by buses in September, Network Rail said today (Wednesday 28 July).

Network Rail said: “Vital work to stabilise a railway cutting in Hove and prevent delays caused by landslips will be taking place between Saturday 18 September 2021 and Friday 1 October 2021 inclusive.

“While this work takes place, no trains can run on the route directly linking Brighton with Hove.

“On Saturday 18 September and Sunday 19 September, buses will replace trains between Brighton and Littlehampton.

“From Monday 20 September, train times will change between Littlehampton and Brighton, with services diverted to run to and from Preston Park, where passengers will need to change trains to complete their journeys.

“Passengers travelling between Portsmouth or Southampton and Worthing, Hove or Brighton will also need to change at Littlehampton.

“Additionally, Great Western Railway services to and from Brighton will start and end at Worthing on weekdays and Portsmouth Harbour at weekends.

“To stabilise the cutting and protect the railway from rockfall, engineers will be installing 1,012 rock bolts into the ground during the blockade.

“These bolts will hold rock netting in place that will catch loose rocks and, in the areas where required, hold the ground together.

“We are working with the local community to look at replanting options to offset the vegetation removed by the works.”

Over the first weekend, engineers plan to carry out repair work to the Wilbury Road Bridge to strengthen the structure.

They are also aiming to upgrade track circuitry between Brighton and Hove stations. Network Rail said: “This is equipment which tells the signalling system and signallers where trains are.”

Over the same weekend, wheel timber renewal will take place at the Shoreham Viaduct, aimed at improving the reliability of train services. 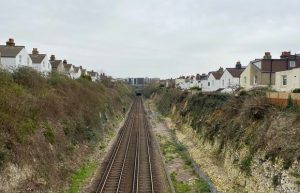 A number of events are planned for the fortnight when the work is being carried out.

Brighton and Hove Albion are due to host Leicester City in a Premiership football match at the Amex Stadium in Falmer on Sunday 19 September at 2pm.

On the same day a London to Brighton charity bike ride is due to end at Black Rock on the seafront.

Football fans will also be hoping to travel to Selhurst Park, in south London, for an 8pm kick-off in the match against Brighton’s nearest rivals Crystal Palace on Monday 27 September.

And the Boundary Festival is scheduled for Saturday 25 September in Stanmer Park, Brighton.

On the same day the Brighton Breeze run is expected to attract thousands of people to Maderia Drive for a Volkswagen (VW) vehicle rally.

“Hove is a key location on our railway network and any disruption here has the potential to disrupt services across the Brighton Main Line.

“We will continue to engage with passengers and lineside neighbours and thank them for their patience while we carry out this work.”

Chris Fowler, Customer Services Director for Southern, said: “While we know there will be inconvenience for some of our customers, this is really essential safety work.

“Therefore, we’re urging anyone travelling along the West Sussex coast in this 14-day period to plan ahead and check before they travel as there will be changes to services and some journeys will take longer than usual.

“Online journey planners will be updated in the next few weeks. We thank all of our customers in advance for their understanding.”