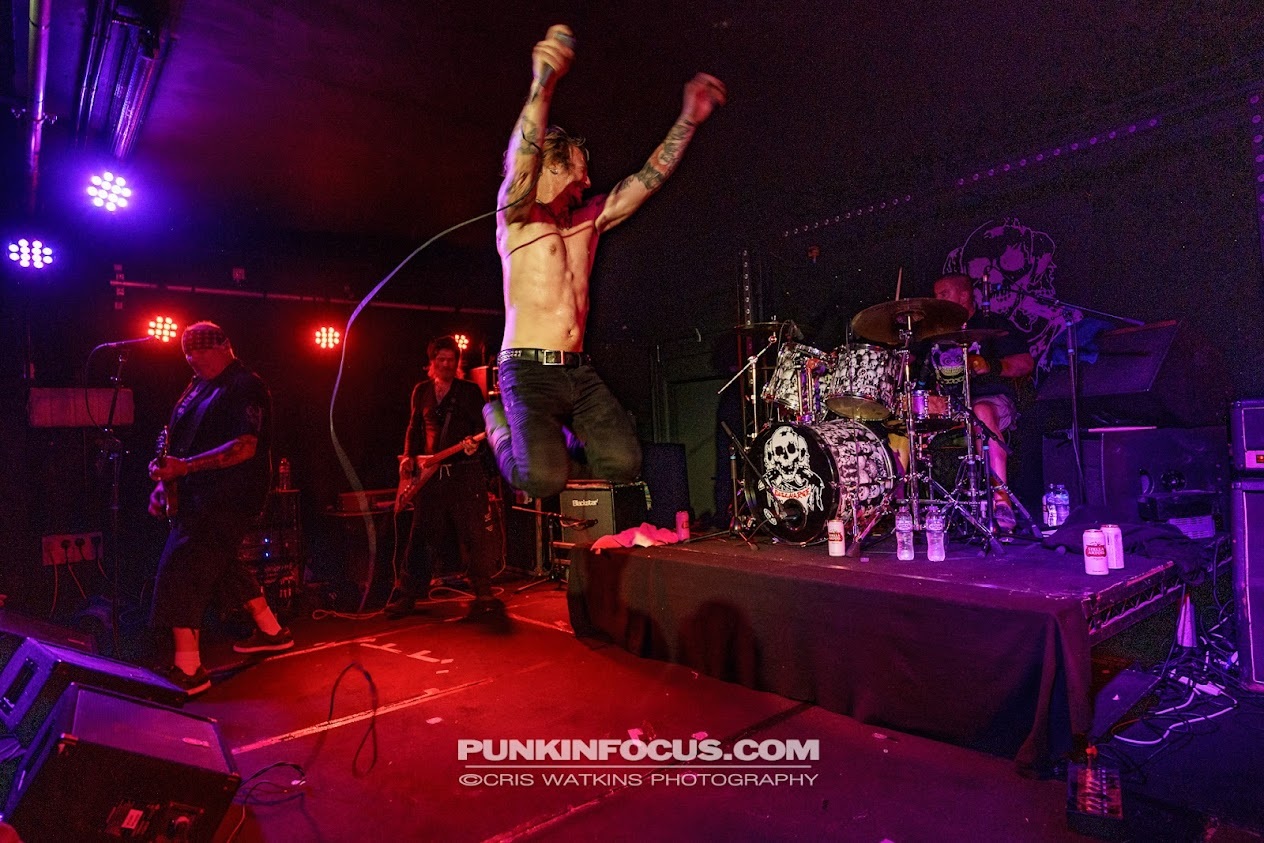 One of the best ever gigs that I attended in my 43 year gigging history was held at the Lyceum in London on Sunday 25th May 1981. It featured no less than five heavy punk bands of the time and in performance first order were the Anti-Nowhere League, Chron Gen, Anti Pasti, The Exploited and Discharge!

To give you some idea of what it was like, the headliners Discharge rattled through their 25 song set in a mere 50 minutes! So you know that it was fast! All the bands released their own bootleg tapes of this infamous ‘Apocalypse Now’ gig and you can listen to Discharge’s performance HERE. 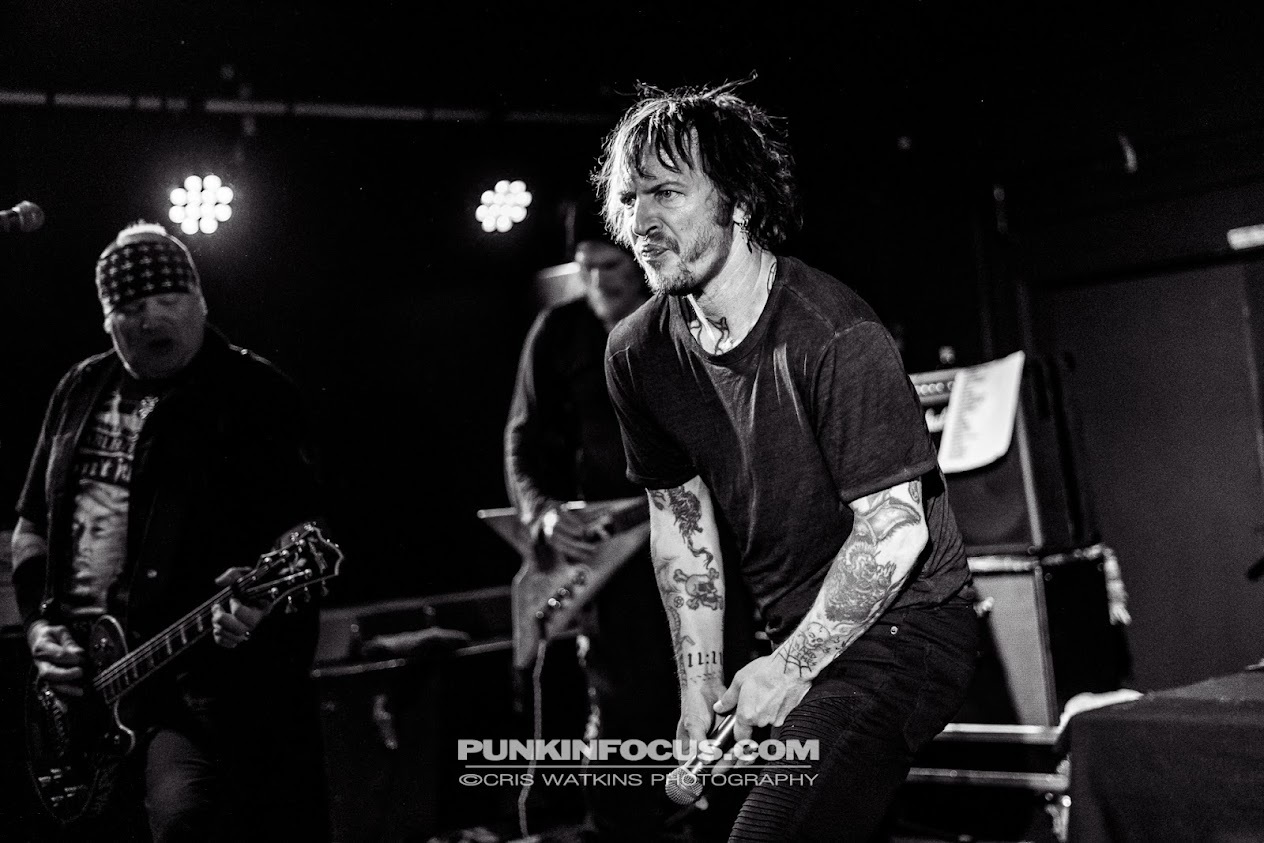 Discharge are still on the warp factor ten case and have appeared at the ever popular Con Club in Lewes just once before and that was on Saturday 6th July 2019. The Brighton & Hove News Music Team were in attendance back then, so read our account of that night HERE.

The Anti-Nowhere League are also still going strong and they will be appearing live at The Con Club on Saturday 4th December 2021. Further information on that gig can be found HERE.

Tonight, we literally whizzed to Lewes directly from the ‘Washed Out’ Festival which was being held at The Hope & Ruin on Queens Road in Brighton. We had witnessed nine of the thirteen bands on the bill and so we thought that we would give another venue a go, having been stationed at ‘The Hope’ for over six and a half hours since 2pm.

On arrival in Lewes, we found out that the first band on the bill, Ättestor, who are Brighton based, were unable to play as one of the members’ family had to be rushed to hospital. Our wishes go with them as they have also had to pull from their Brighton Punx Picnic event on Friday 3rd September at the Cowley Club. 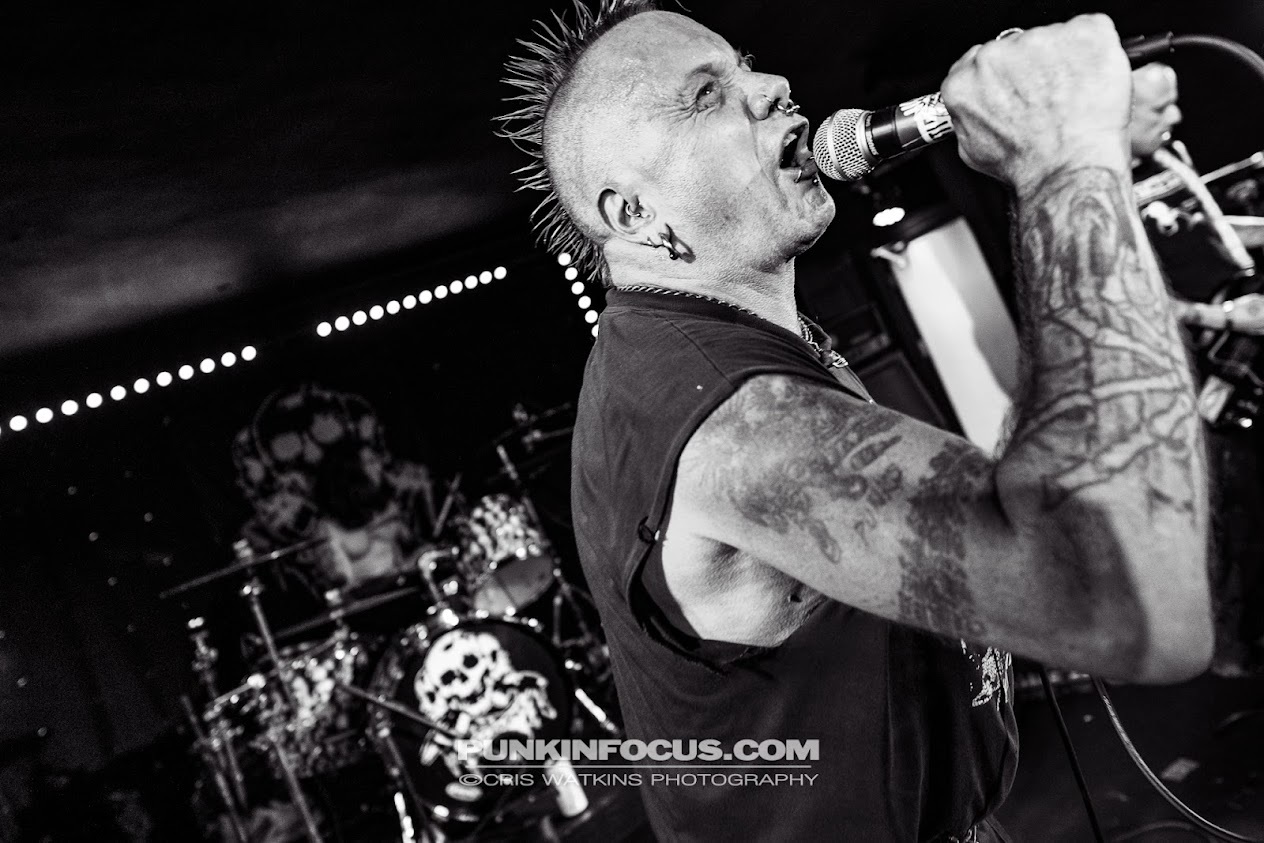 This meant that the main support band tonight, Butcher Baby, would now be playing live from 8:45pm. However, on arriving at the venue, we were informed that they were late on stage and that they had only just started their first song once we had arrived. Luck was on our side!

It appears that The Con Club have made good use of their enforced lockdown as I do believe that they have spruced up the place by fitting brand new lighting and spotlights on the stage, plus they have repainted the stage black and replaced all of the old previous gig posters that hung on the wall, with a select few paintings. 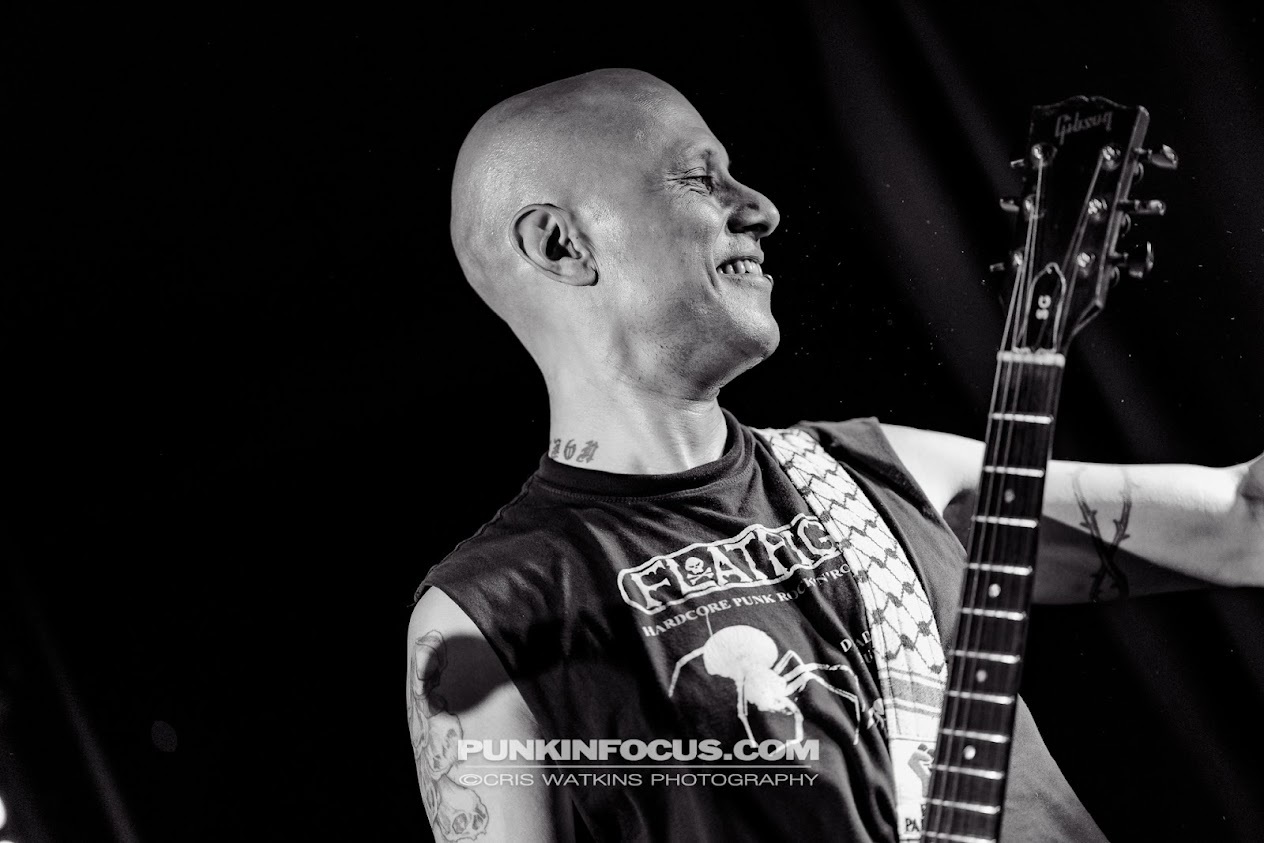 They blitzed their way through their fifteen songs in no time at all and certainly set the right tone for the evening. Their set contained six of the seven tracks contained on their self-titled debut EP, which you can listen to HERE. 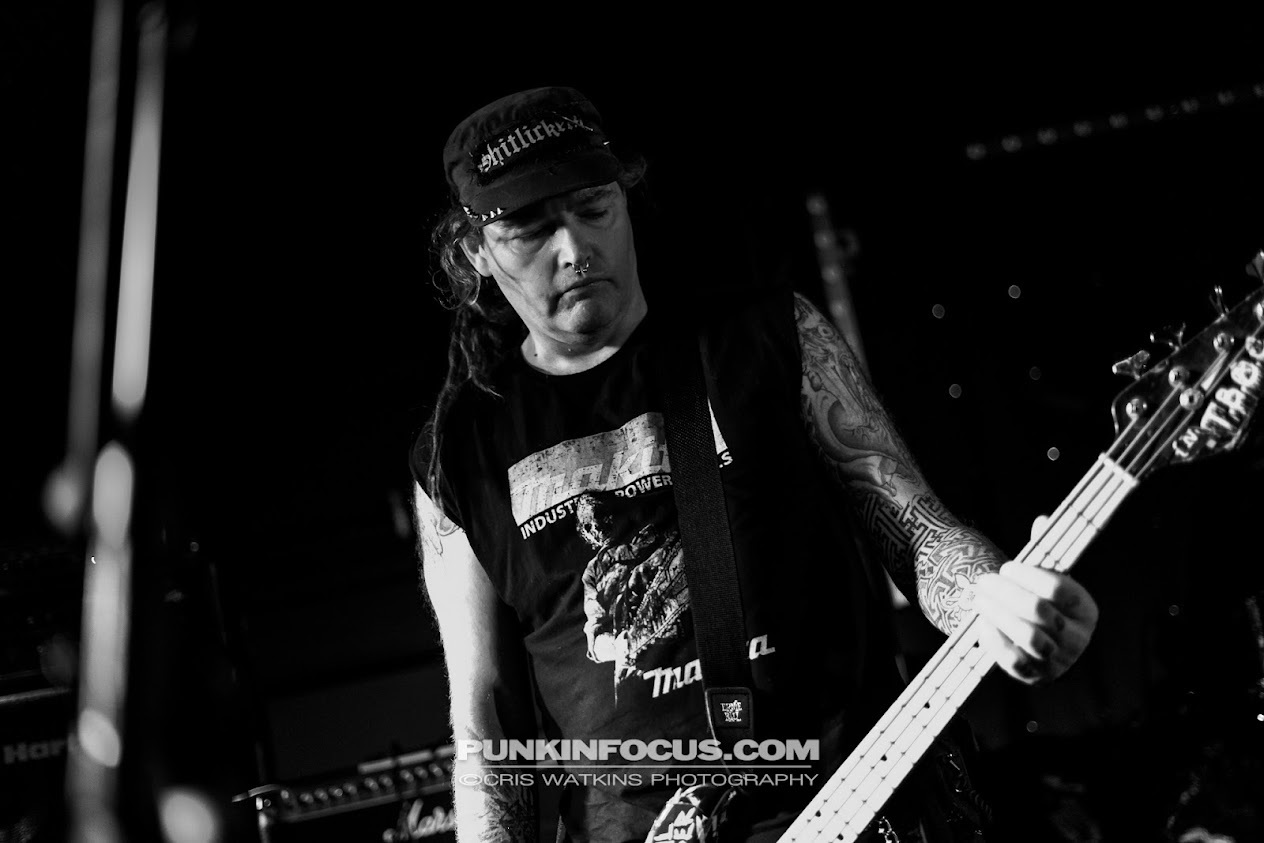 The Butcher Baby loud punk set was delivered at 200mph and the quartet certainly looked the part, with vocalist Mark Licker sporting tattoos and piercings along with a Mohican hairstyle, guitarist Robin Licker going for the bald look, bassist Les Doherty adopting the crustie look and drummer Luke Hackett just letting his hair grow long and taking his t-shirt off to reveal his tattoos.

The crowd sadly did not fill the venue on this occasion, but I personally know a number of punks that are still staying away from confined concert venues due to covid fears. The punters that were in attendance certainly enjoyed Butcher Baby (and later Discharge). It was pleasing to note that I would estimate that almost 50% of the crowd were in their twenties and thus the new generation of fans are now on board and ready to mosh the old boys (and girls) out of the way. This goes to show that the hardcore punk scene is thriving and far from stagnant. As Wattie of The Exploited said “Punks Not Dead”!. 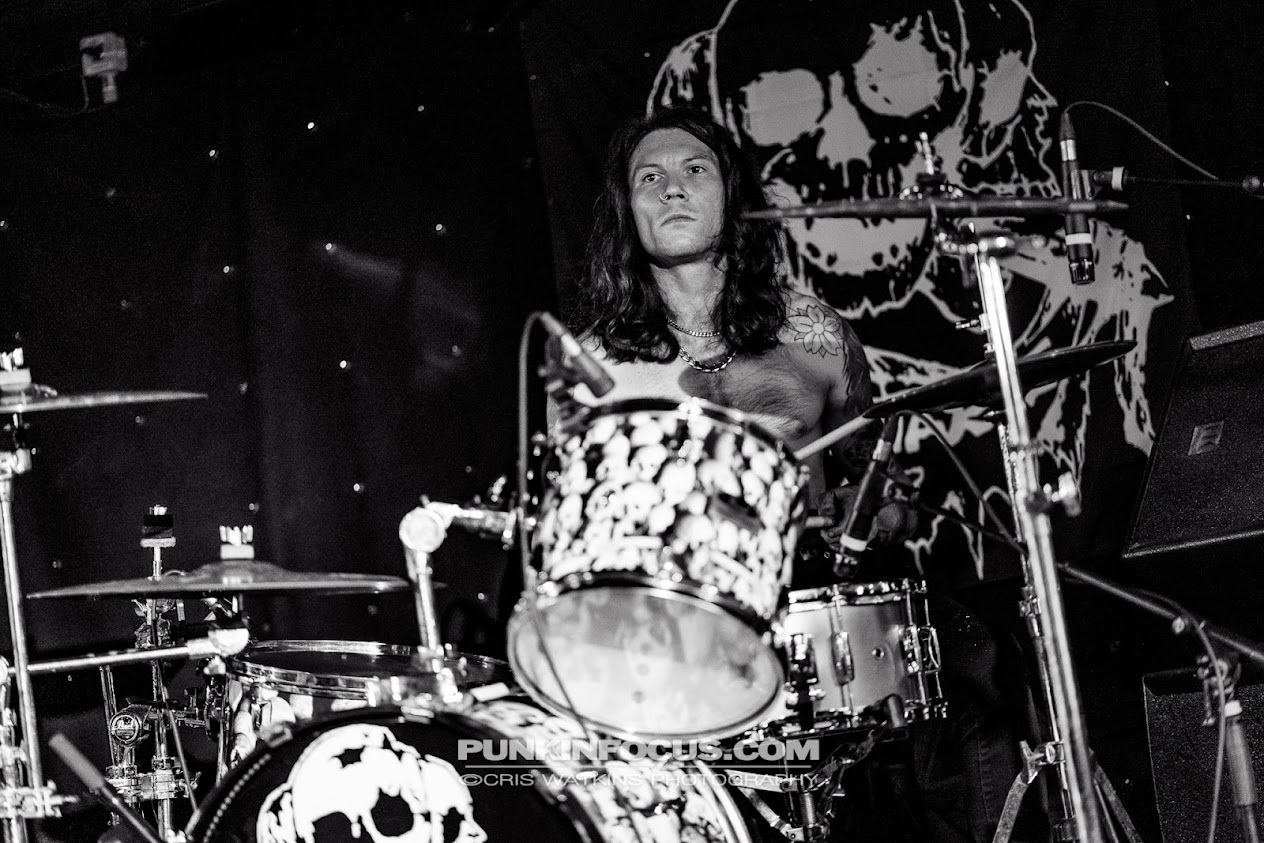 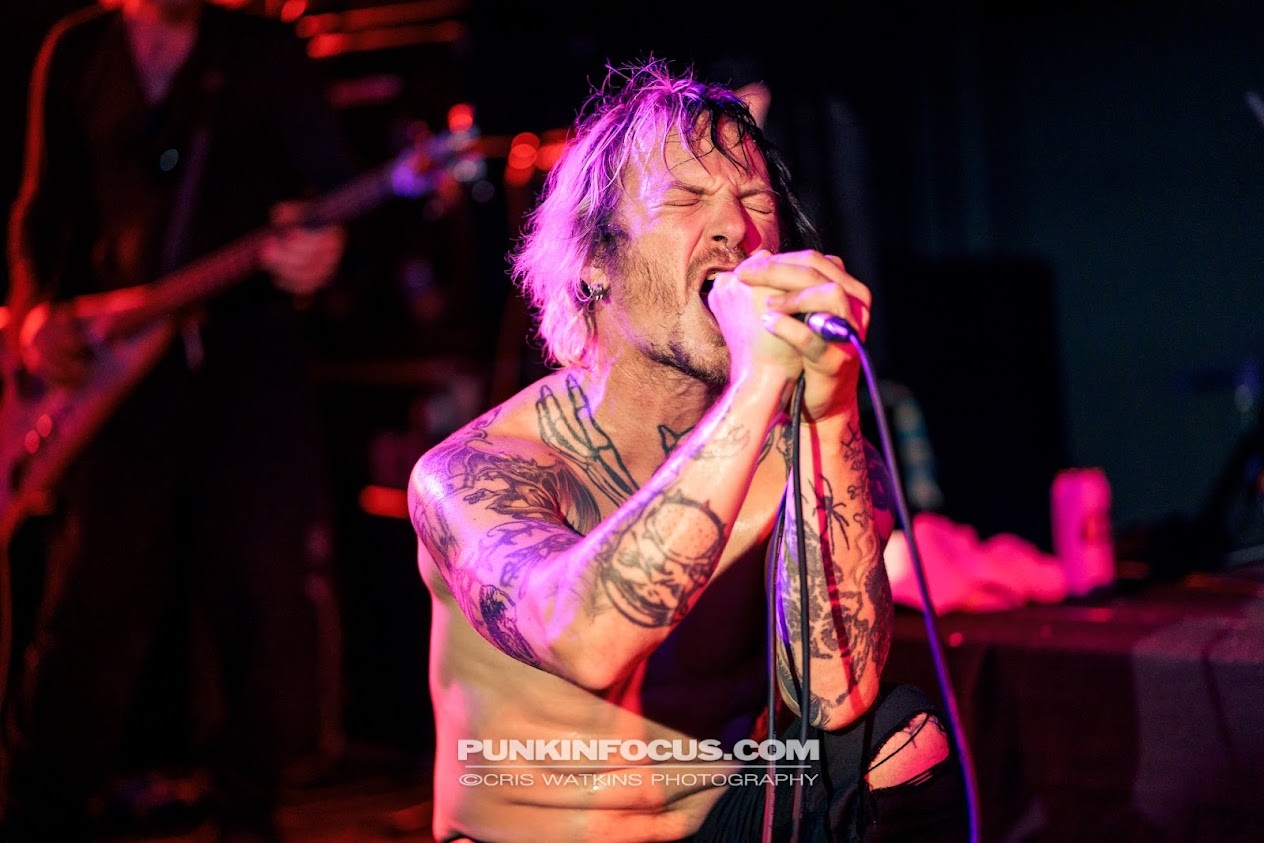 I was mighty impressed when I first saw Discharge playing live a couple of times back in 1981 and also when I became reacquainted with them again on 5th October 2019 at HRH Punk Festival in Sheffield, where I quoted in my review “they haven’t slowed down at all, that’s despite a foray into metal and back again and several different personnel. Highlight…’Ain’t No Feeble Bastard’”. 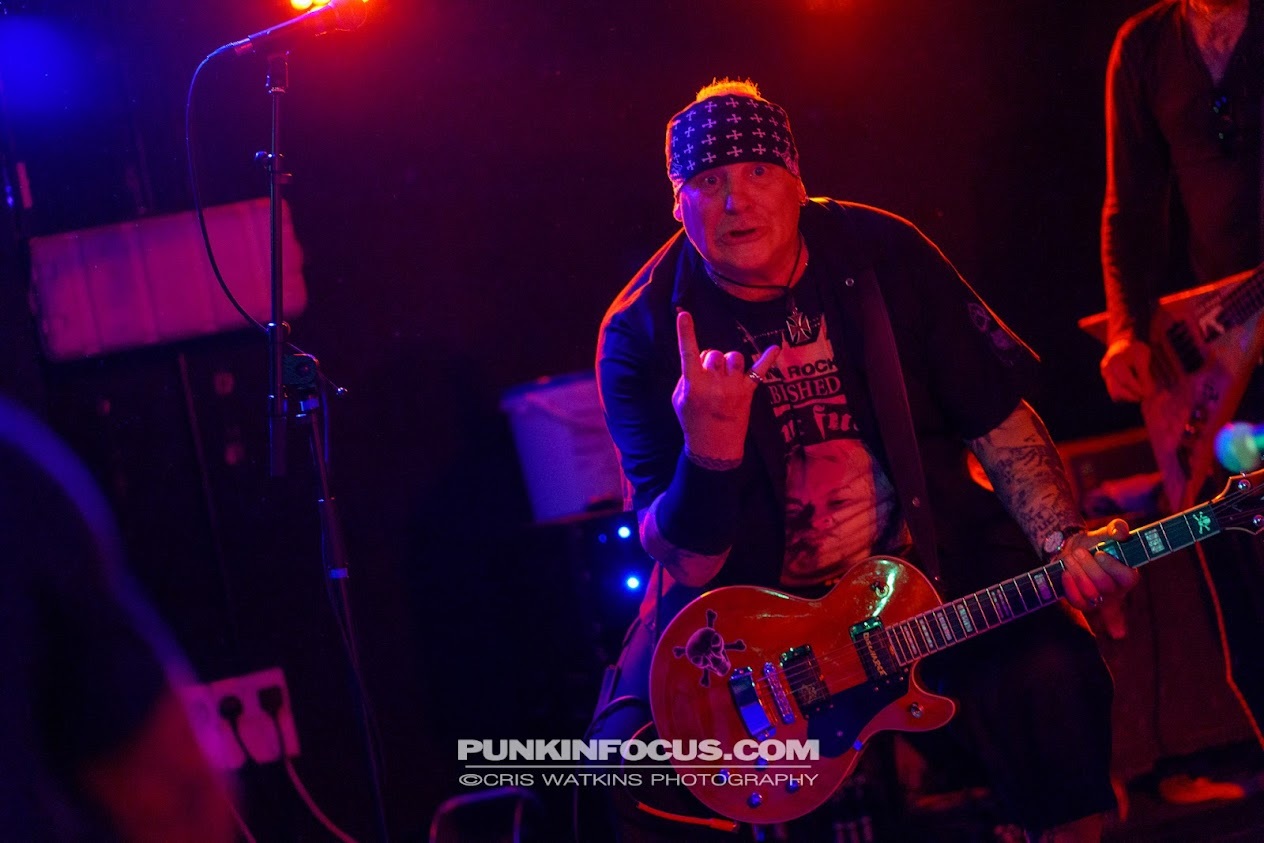 Tonight in Lewes I was expecting more of the same during their decent hour long set, especially as their tracks don’t usually last very long. There were two dozen to be precise and being a (late due to covid) 40th anniversary celebration of their debut 1980 EP ‘Realities Of War’, the hits kept on coming. Coming at 300mph to be precise. There weren’t many tracks that I particularly wanted to hear that were omitted. Most were all present and correct, however the other three tracks on the ‘Realities Of War’ EP didn’t get an airing, which was a shame, especially as it was Clay Records ‎release ‘CLAY 1’. A release which took them three hours to record! I mean what the hell were they doing? Eating scones and drinking tea? Surely they could have rattled it off in an hour. Oh I don’t know. 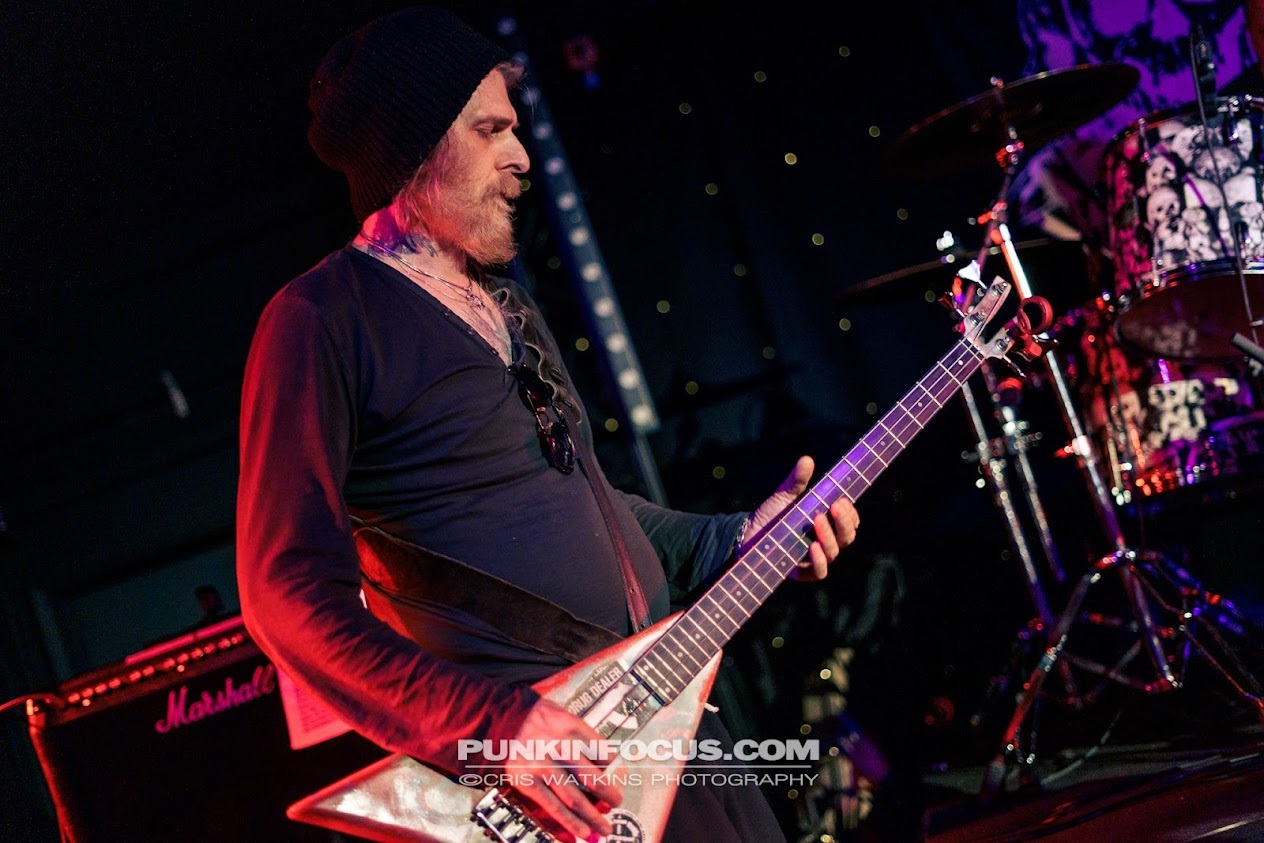 Anyway, back to tonight and the first thing I noticed just prior to Discharge coming on stage was how cool their drumset looked with its skulls on it. Then a harrowing public service announcement soundbite as included on their debut album is played over the soundsystem. Scarily the threat of nuclear war still looms large and is just as relevant today as it was in the eighties. The stage was set for the current line-up including three original members (Rainy, Bones and Tezz) to take the stage and at 9:59pm we were off!

This band were one of the originals on the Hardcore Punk scene having formed in 1977. They set the bar for others to follow with their hundreds of miles an hour unrelenting songs about anarchy and pacifism. The drumming was relentless and the two guitars and bass were closely following behind. 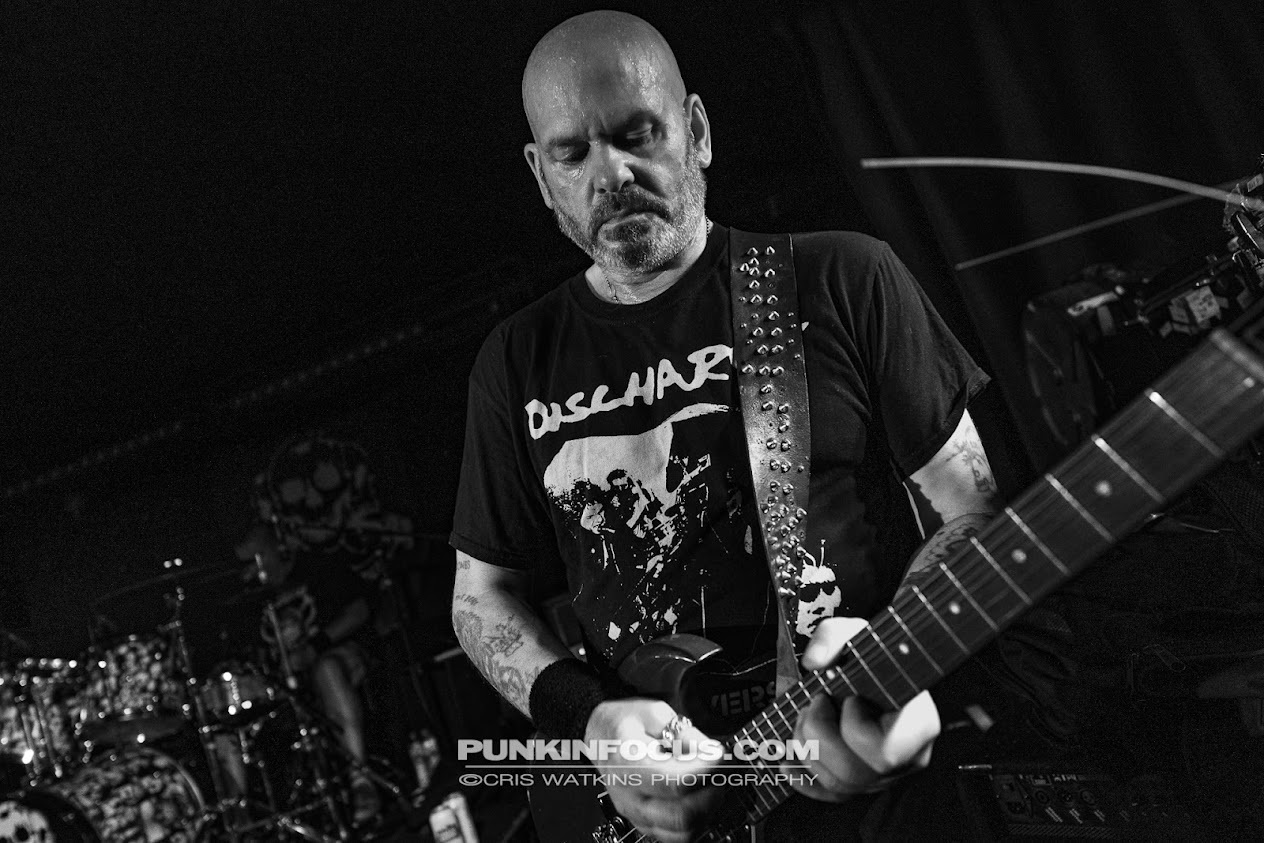 The youngsters in the crowd were moshing nicely and controllably, which is more than can be said about the older geezer who kept on jumping on stage and barging into people and knocking two different young girls over and spilling my drink partly over myself and my girlfriend. I could see the couple in front of me getting more and more stressed as they watched this inconsiderate idiot. There’s always one and it wasn’t even Smelly this time as he wasn’t even here!

Tonight was the first ever concert being put on in Lewes by the Bristol based Death Or Glory Promotions and hopefully they were encouraged with what they saw and achieved, as The Con Club is a fab venue with inexpensive beer and run by volunteers. It has nothing to do with any political parties, just in case you were wondering. The ‘Con’ bit is short for ‘Constitutional’. This was the final date of the mini four date tour which had already taken in Cardiff, Bristol and Southampton. I wonder how Lewes fared against the others as it’s much smaller in population than the others, but certainly attracts the hardore punks from far and wide. 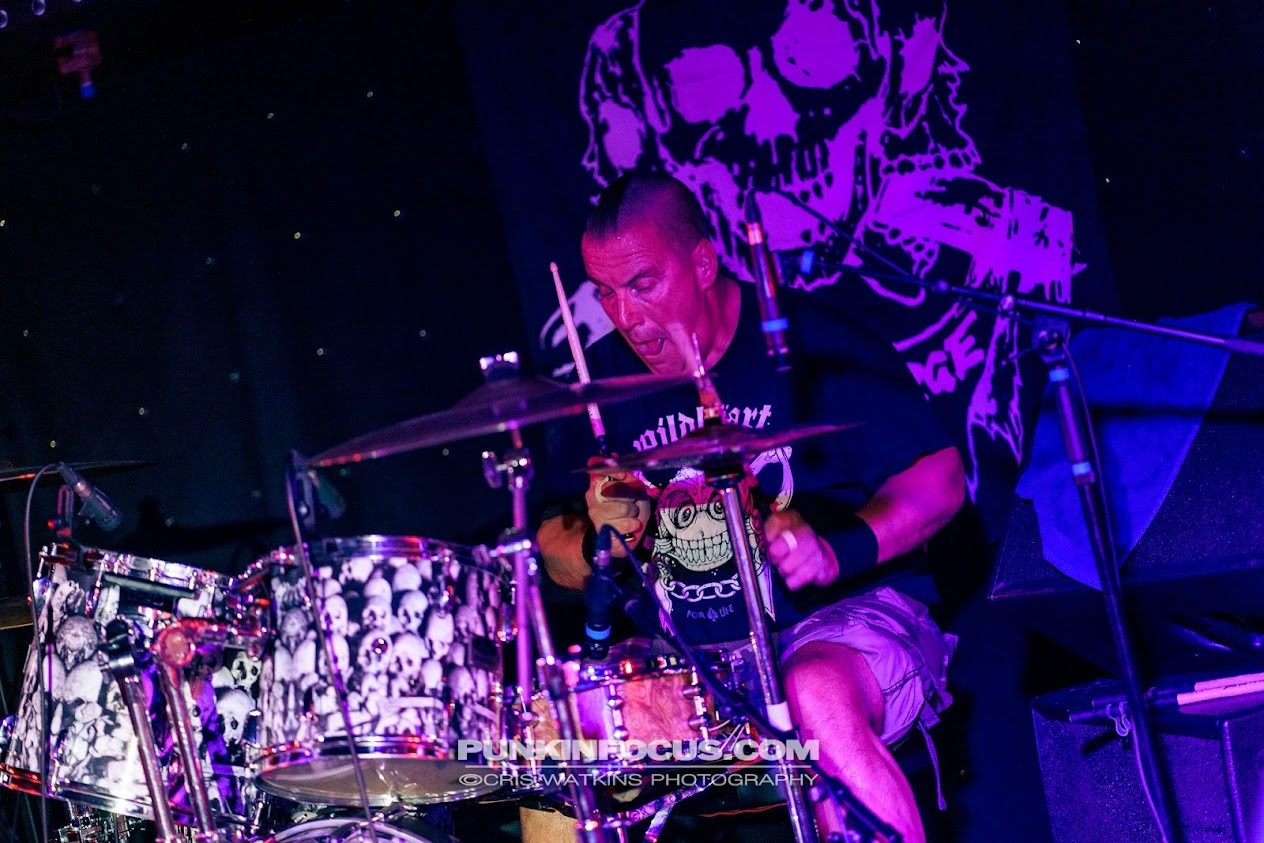 Thankfully, Discharge did a U-turn on their foray into metal and as a result the hardcore punk fans have returned and so did their heavy, distorted, and grinding guitar-driven sound and brawly shouted vocals. To those who do not have a trained ear for hardcore punk and who were not attending this evening, it is quite likely that if you were present, then you may be misguided in thinking that the band were simply playing the same track 24 times on the trot. I mean, it didn’t do the Ramones any harm with their slower 1-2-3-4 punk surf beats, so “Why, why why why why” can’t Discharge also do it. Oh that’s a point, Discharge didn’t play ‘Why’ tonight. That’s a shame, oh well.

But they did delve into their back catalogue to reel off some classic tracks including the early singles ‘Fight Back’, ‘State Violence State Control’ and the best track of the night ‘Decontrol’. Having said that, they also played some material from this century which didn’t sound out of place against the earlier stuff, including ‘New World Order’ and ‘Hate Bomb’ (both taken from their seventh studio album ‘End Of Days’ released in 2016), ‘Hype Overload’, ‘Hell Is War’, ‘Corpse Of Decadence’ and ‘Accessories By Molotov’ (all taken from their self-named album released in 2002). 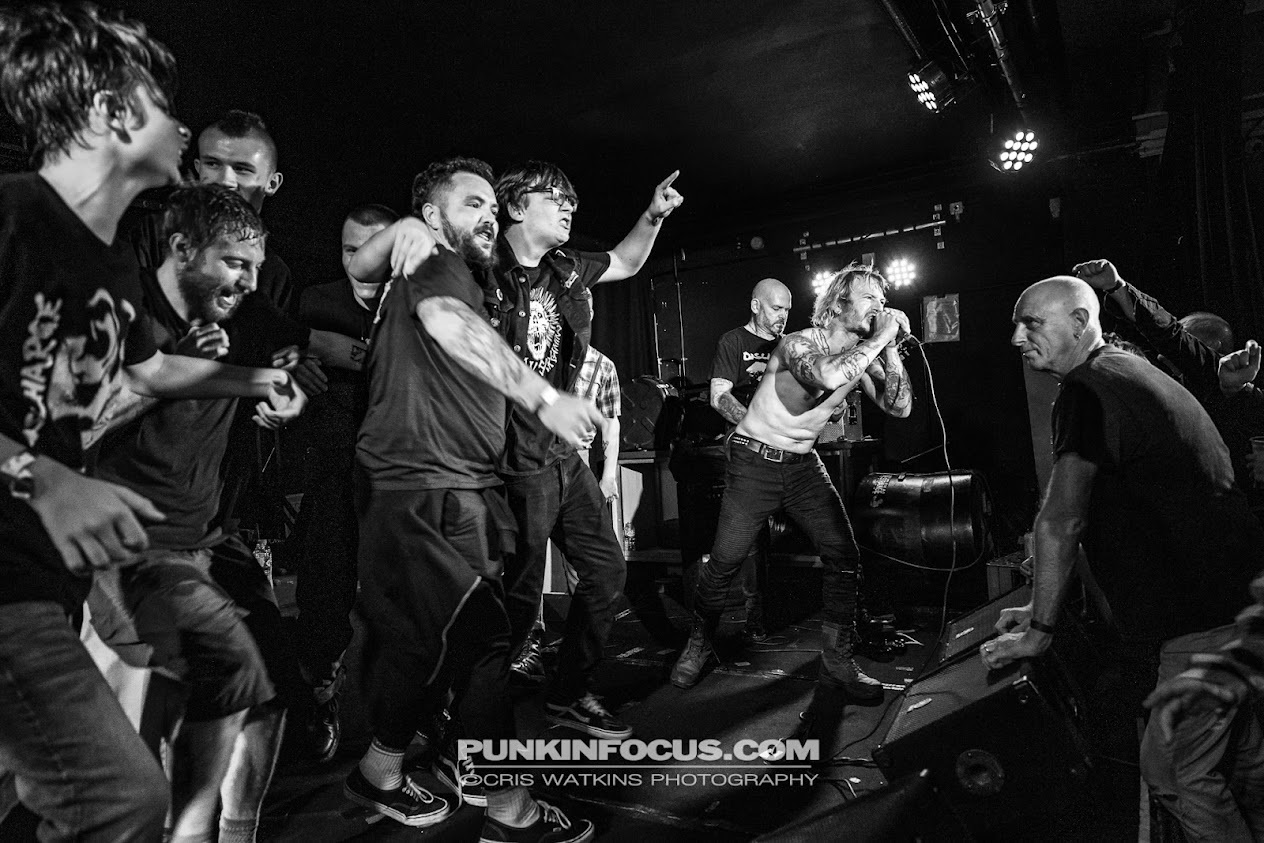 Discharge setlist:
‘The Blood Runs Red’
‘Fight Back’
‘Hear Nothing See Nothing Say Nothing’
‘The Nightmare Continues’
‘A Look At Tomorrow’
‘Beginning Of The End’
‘A Hell On Earth’
‘Cries Of Pain’
‘Ain’t No Feeble Bastard’
‘Protest And Survive’
‘Hype Overload’
‘New World Order’
‘Corpse Of Decadence’
‘Hate Bomb’
‘Never Again’
‘State Violence State Control’
‘Realities Of War’
‘Decontrol’
‘Accessories By Molotov’
‘Hell Is War’
‘You Take Part In Creating This System,
‘Wars No Fairytale’
‘You Deserve Me’
‘The Possibility Of Life’s Destruction’

More info on Discharge HERE and find them on Bandcamp HERE. 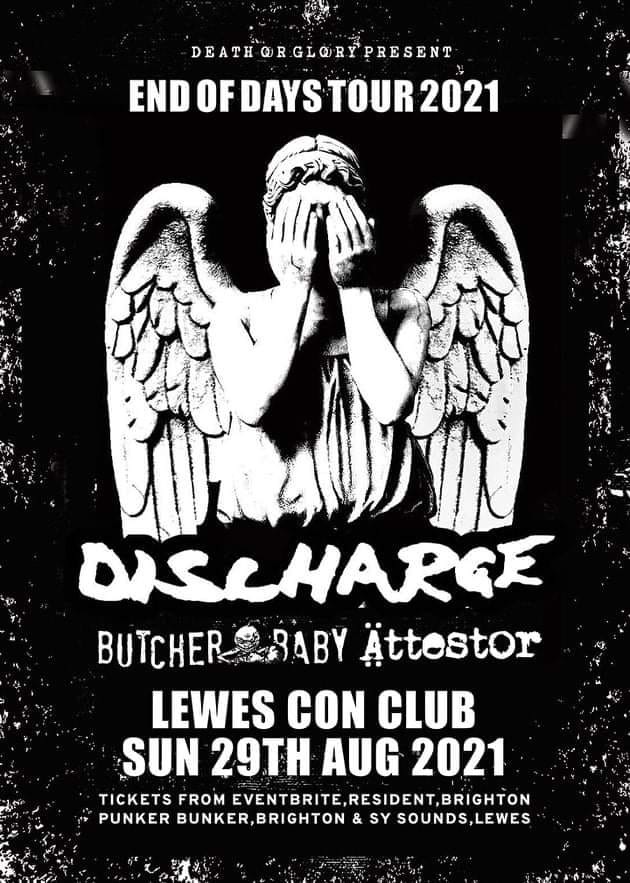 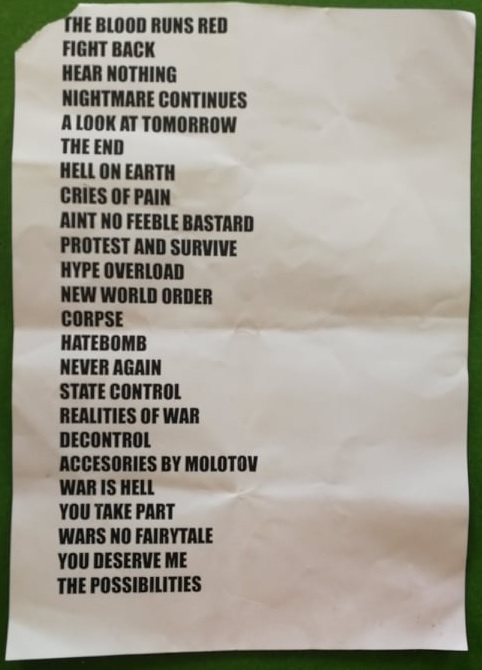 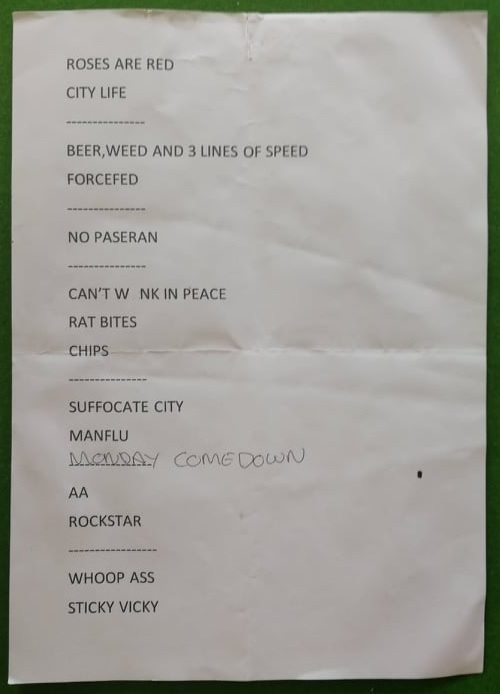 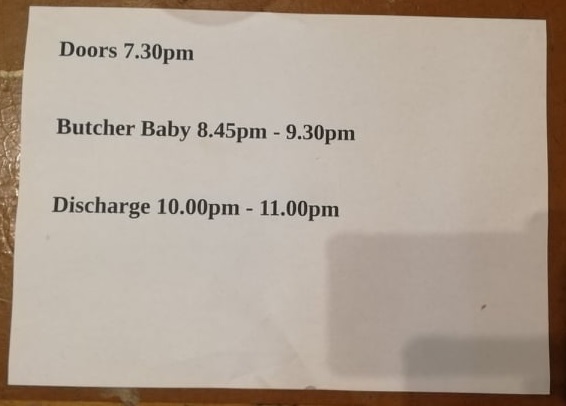