Believe the hype overload……Discharge are back on my playlist 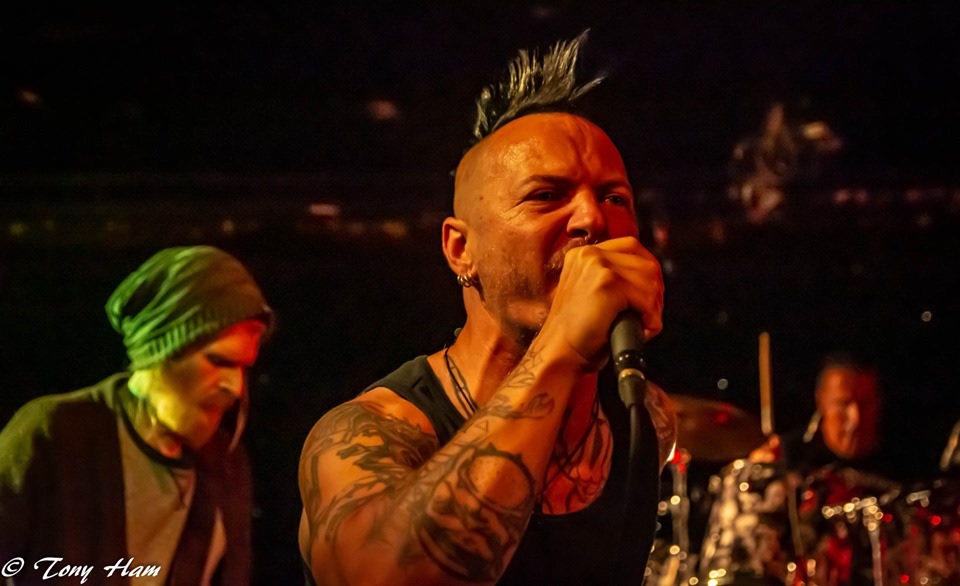 On moving south from Scotland to London in 1981, one of the first punk bands to come to my attention were Discharge, in large part due to the iconic leather jacket with their name emblazoned over the lower back and numerous studs inserted above covering virtually the whole of the back.

I was mightily impressed with this and as a result I discovered the noise that was Discharge and went out to purchase ‘Why’ and ‘Never Again’ from my local record store. On the back of that, I then saw them play live a couple of times at The Lyceum and Klub Foot dating as far back as 1983. I was astonished that the lead singer at the time Cal was able to sing with such rasping vocals and I had heard that he had actually been sick on stage as a result though never witnessing it myself.

Like many at the time I sadly lost interest in the band as they had a flirtation with heavy metal, which unfortunately alienated their punk following and ultimately led to the band splitting up in 1986. I do though admire their influence on the heavy metal scene and the fact that they have had early songs covered by the likes of Metallica, Anthrax and Sepultura, is pretty impressive in itself. They had been off my radar for quite some time, though I would very occasionally play my copy of their first album ‘Hear Nothing See Nothing Say Nothing’ for which I paid no more than £3.99.

Fast forward 36 years later and Discharge were coming to play live in Lewes for the first time ever. The Con Club is rapidly becoming one of my favourite venues for its ability to attract many big names from the world of punk, which you wouldn’t think synonymous with a town like Lewes.

Always welcoming, you almost feel like you are walking into your own front room and I even got to watch Andy Murray and Serena Williams complete their Mixed Doubles victory at Wimbledon on the television. They even have an App for your mobile phone, which I would suggest you download.

I had particularly been looking forward to this concert since it was announced, but a raging toothache just prior had put my attendance in doubt, even though I had only just agreed to review the gig. Did I really think that going to see Discharge, one of the loudest bands I have ever seen play live, would cure me of my pain, or more likely would leave me in tears after aggravating said pain? The only solution was to pay a visit to the Out of Hours Emergency Dentist after being let down by my regular one and so after a night of extreme pain once the anaesthetic had worn off, I found myself fit and raring to mosh on a Saturday night in Lewes. This would be the supreme test to see if the dental work had been a success.

Prior to the gig I had spoken to an ex-work colleague of mine who had last seen them play live in 2004, so prior to the new vocalist joining, and he had described it like “seeing your old girlfriend…..very mixed.” This did not stop me heading to Lewes on a sultry Saturday night with an open mind and in the hope that Discharge would be able to regain my faith in their music and vision. I mean this band were one of the originals on the Hardcore Punk scene having formed in 1977. They set the bar for others to follow with their hundred miles an hour unrelenting songs about anarchy and pacifism. I didn’t quite have the spring of a 19-year-old as I walked down the High Street, but my mind had reverted to 1983 when I last saw them play live and I had that feeling that the night was about to get a whole lot hotter. 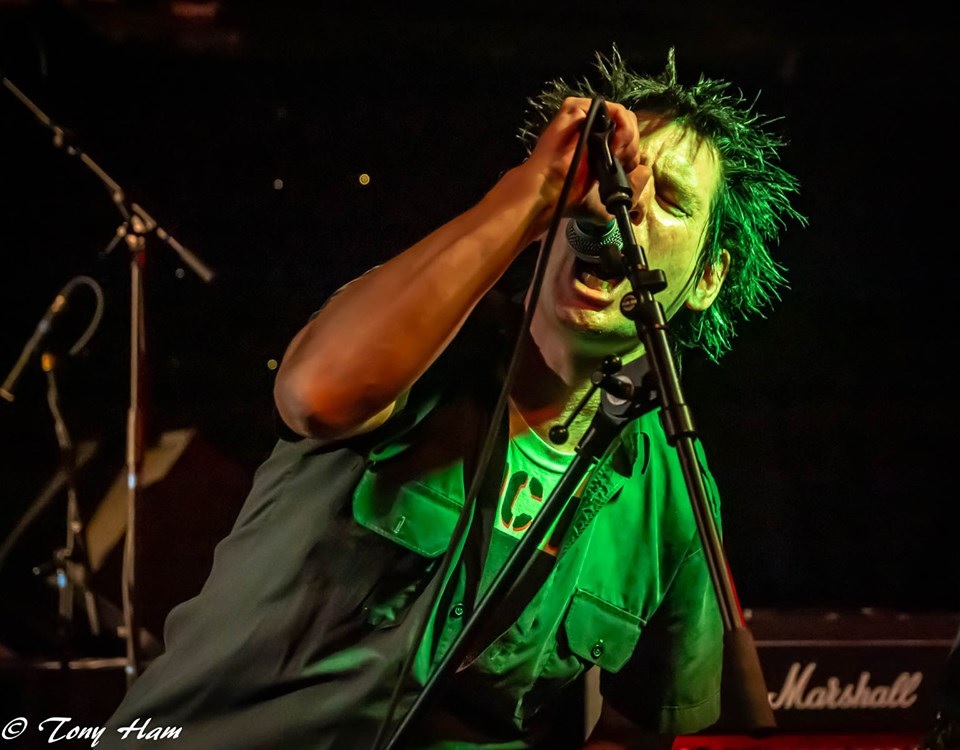 I was unaware who the ‘special guests’ were until moments before they took to the stage and I was informed that the band were called ‘Constant State of Terror,’ an act that I was unfamiliar with, even though they had played my hometown Hastings in 2010 when they supported the UK Subs at The Brass Monkey. I must have missed that one.

‘Constant State of Terror’ are a DIY Hardcore Punk band from Brighton and formed almost 15 years ago, with a lot of experience behind them from playing in various bands for apparently as long as they care to remember. They have supported bands ranging from the Subhumans to Napalm Death, so I should really have known what to expect.

They soon made their presence known to me though as they ripped into their thunderous set. From the first few chords it was obvious that ear plugs would be a necessity as this intimate venue was filled with some rather loud sounding guitars, and drums topped off with ferocious vocals. As a warm up for the main act of the night they were very good, but I can’t help wondering why they haven’t released many recordings nor played many gigs considering the lengthy period of time that they have been together, that their music certainly warrants. This was a good quality hardcore punk set full of energy with my personal favourite tracks probably being ‘Nobody’s Master’ and ‘Not In My Name’ which Jules told us is about the West interfering with the Middle East and surrounding regions in the name of oil and greed. Credit must go to the promoter for choosing the perfect support band for the night meaning that ‘Discharge’ would have to step up to the mark to ensure their top of the bill status.

Further info on the band can be found HERE. 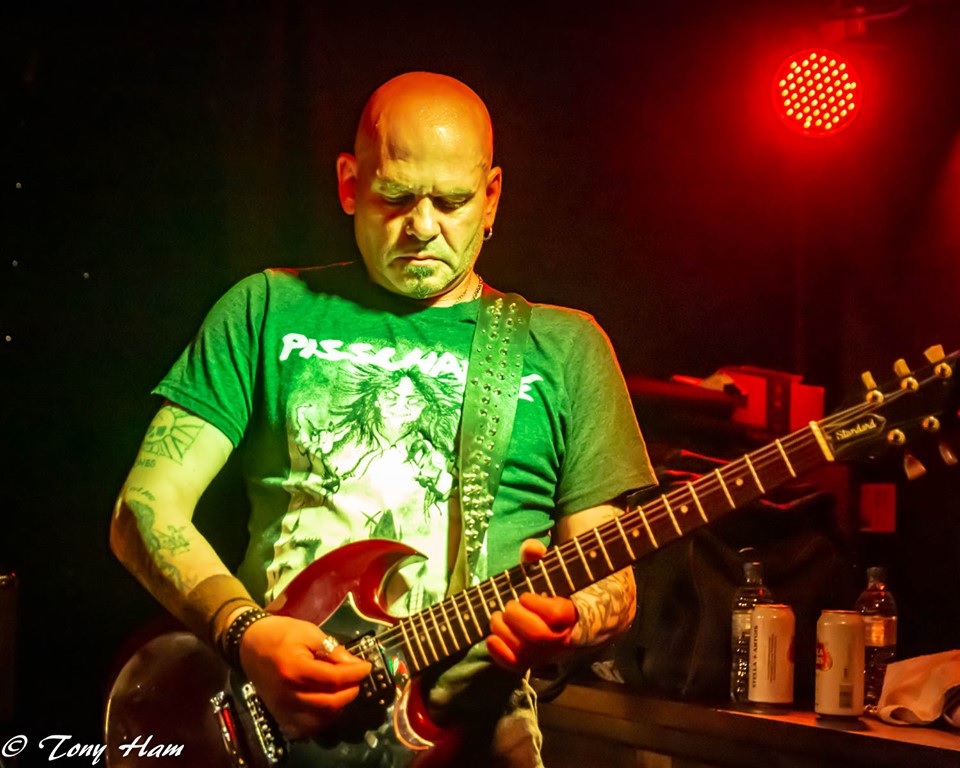 Discharge entered the stage to a harrowing public service announcement soundbite as included on their debut album. Scarily the threat of nuclear war still looms large and is just as relevant today as it was in the eighties. The scene was set for the current line-up including three original members (Rainy, Bones and Tezz) to take the stage.

Having had a sneak peak at the setlist beforehand, it looked mighty promising and I was not to be disappointed. Any fears that I had were soon put to bed as it became obvious that the band had returned to their hardcore punk roots, as they delved into their back catalogue to reel off some classic tracks including the early singles ‘Fight Back’, ‘State Violence State Control’ and ‘Decontrol’, at which point the mosh pit went out of control with bodies flying all over the dancefloor, with the added hazard of spilt beer making it extremely dicey. I must be getting more health and safety conscious with age, as for the most part I steered clear of the beer sodden area, having been drenched in the stuff, preferring to mosh on the periphery of the pit.

I did though particularly enjoy my favourite Discharge song ‘Never Again’ in the heart of the pit, which involved some audience participation on the microphone. They also played some material from this century which didn’t sound out of place against the earlier stuff, including their last single ‘New World Order’, ‘Hate Bomb’ (both taken from their seventh studio album ‘End of Days’ released in 2016), ‘Hype Overload’, ‘Hell Is War’, ‘Corpse Of Decadence’ and ‘Accessories By Molotov’ (all taken from their self-named album released in 2002).

To the untrained ear, it was apparent that the band’s musicianship has improved greatly over the years and this was confirmed by the expert technical knowledge of my companion for tonight’s gig, the lead singer and guitarist with Hastings band ‘Punka’, who are hoping to break Lewes in the near future. Watch this space. He was most impressed and said that they didn’t miss a chord.

For me the introduction of New Yorker JJ on vocals was particularly impressive. He has been with the band since 2014, when they expanded to become a five piece for the first time with the return of Tezz to the ranks, but JJ’s passion and energy, being constantly on the move for virtually the whole gig, has given the band a new lease of life which I loved. I wonder if JJ ever did find Lewis as he kept on asking after him throughout the set?!

As a word of warning to my neighbours, based on tonight’s performance my copies of ‘See Nothing Hear Nothing Say Nothing,’ ‘Why’ and ‘Never Again’ will once again become regular visitors to my turntable. My mementos of the night included the limited-edition t-shirt exclusively made for this gig with the words ‘Noise Not Music’ on the reverse which I have to say is doing themselves a disservice as yes it is noisy, and I love it, but they can now count themselves as accomplished musicians, playing as they do at such speed without error. Rainy also gave me one of the best setlists to add to my ever-increasing collection. Add to that a photo call with JJ and Bones and you have the perfect Saturday evening in Lewes. My faith in Discharge was rejuvenated tonight as I witnessed yet another memorable gig from a band of my youth and any little falling out we may have had has been forgiven.

As for my teeth there were no ‘cries of pain’ proving that I ‘ain’t no feeble bastard!’

Tonight’s setlist was:
‘The Blood Runs Red’, ‘Fight Back’, ‘Hear Nothing See Nothing Say Nothing’, ‘The Nightmare Continues’, ‘A Look at Tomorrow’, ‘A Hell on Earth’, ‘Cries of Pain’, ‘Ain’t no Feeble Bastard’, ‘Protest and Survive’, ‘Hype Overload’, ‘New World Order’, ‘Corpse of Decadence’, ‘Hate Bomb’, ‘Never Again’, ‘State Violence State Control’, ‘Realities of War’, ‘Decontrol’, ‘You Take Part in Creating this System’, ‘Accessories by Molotov’, ‘Hell is War’, ‘The Possibility of Life’s Destruction’. 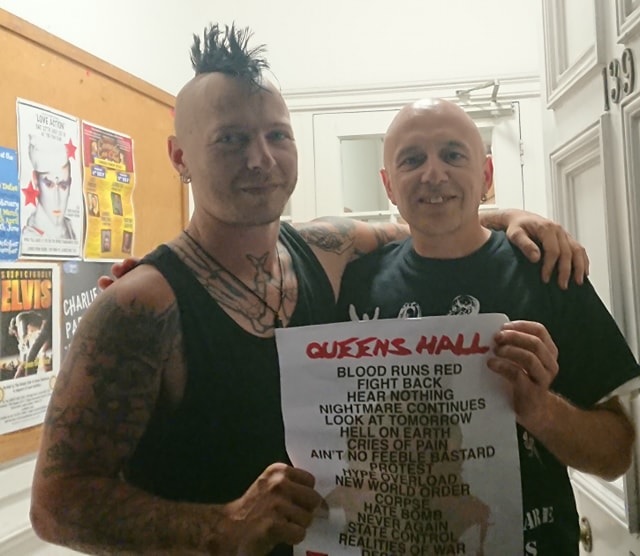 Jeff “JJ” Janiak from Discharge presenting me with the Lewes setlist, which they obviously borrowed from their Queens Hall gig 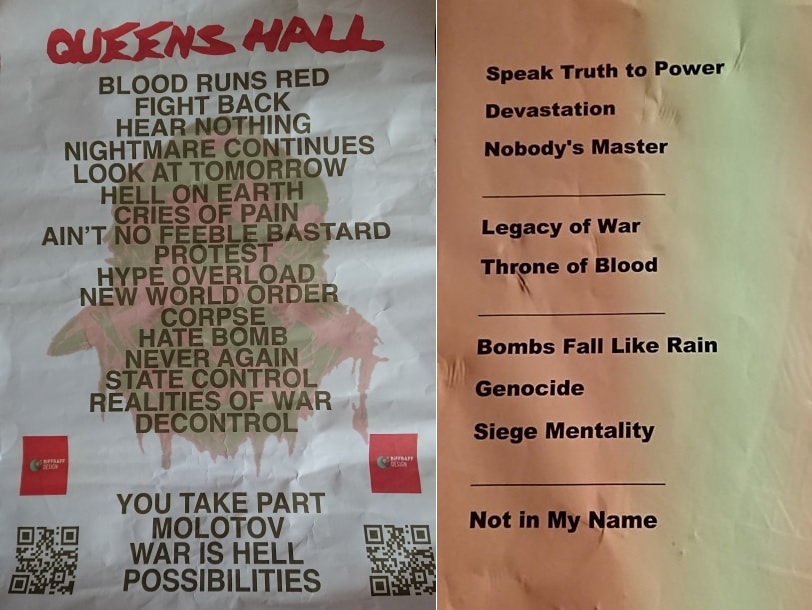 The setlists – Discharge (left) and Constant State Of Terror (right) 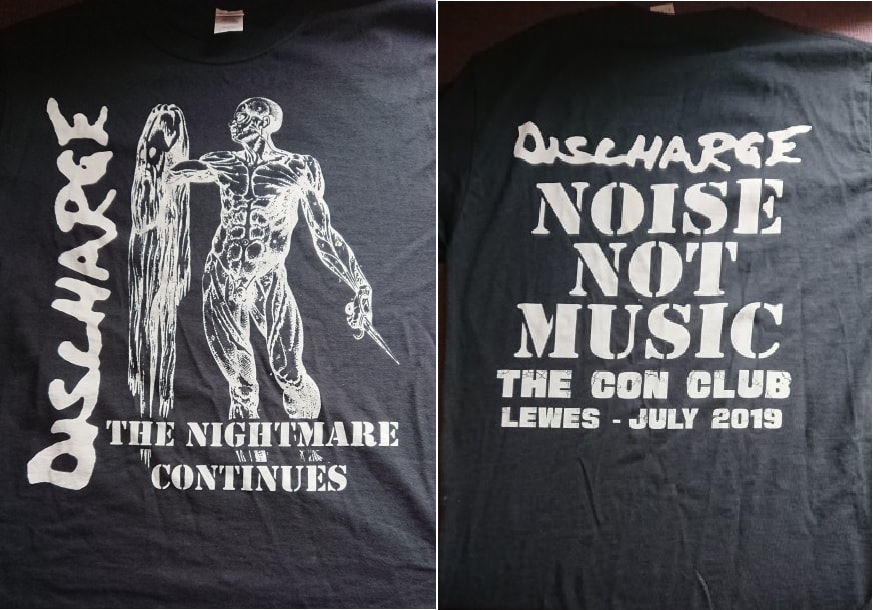 The specially printed Discharge t-shirts for the gig