Disquiet over payments from developers in Brighton and Hove

A councillor is asking for a fresh look at how developers’ payments are used after rule changes appeared to cost a community hundreds of thousands of pounds.

She said that a rule change led to a financial loss to the community after Brighton and Hove City Council changed the way that it asked developers for contributions.

Councillor Fishleigh said that the Gold (Saltdean) Ltd scheme for 72 homes was hailed a success for contributing a community infrastructure levy (CIL) total of £335,000.

Councillor Fishleigh, who represents Rottingdean Coastal ward, plans to ask the council’s Tourism, Equalities, Communities and Culture Committee to look again at how the CIL is calculated for big schemes.

She said: “When the revised planning application came to committee in December, I did raise the issue of the reduced CIL/106 money over and over again and pointed out the large difference.

“I said that both the city and Saltdean – and its sister villages of Rottingdean and Ovingdean – would lose hundreds of thousands of pounds which are needed for our schools, roads and amenities.

“We’ve even lost real-time electronic bus boards for the nearest bus stops to this development.

“However, Green and Labour councillors weren’t interested and voted in favour of the development.

“I was baffled when I read (the council’s) news release which heralded the application of CIL at Coombe Farm as a success.

“This is the kind of half-truth that makes myself – and residents – despair.”

The previous application for 60 homes by Mike and David Carr included £223,000 for recreation, £335,000 for education and £105,000 for sustainable transport such as dropped kerbs and bus stop improvements.

All these elements are now included in Gold’s £335,000 contribution, of which £50,000 is available for ward-specific projects.

A further £155,000 is still going towards section 106 contributions in the new development, including an artistic element, local employment scheme and a travel plan, similar to the 2018 scheme.

Various groups within Saltdean, Rottingdean and Ovingdean have got together and produced a list of projects across all three areas that need funding.

Councillor Fishleigh said: “We have multiple large housing developments in the area and are taking a planned approach to share 106 – and now CIL – money.

“If there are any local groups that would like to be considered for funding, then please contact me.” 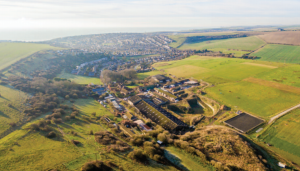 Councillor Fishleigh’s question is due to be answered at a meeting of the council’s Tourism, Equalities, Communities and Culture Committee at Hove Town Hall at 4pm next Thursday (16 September).