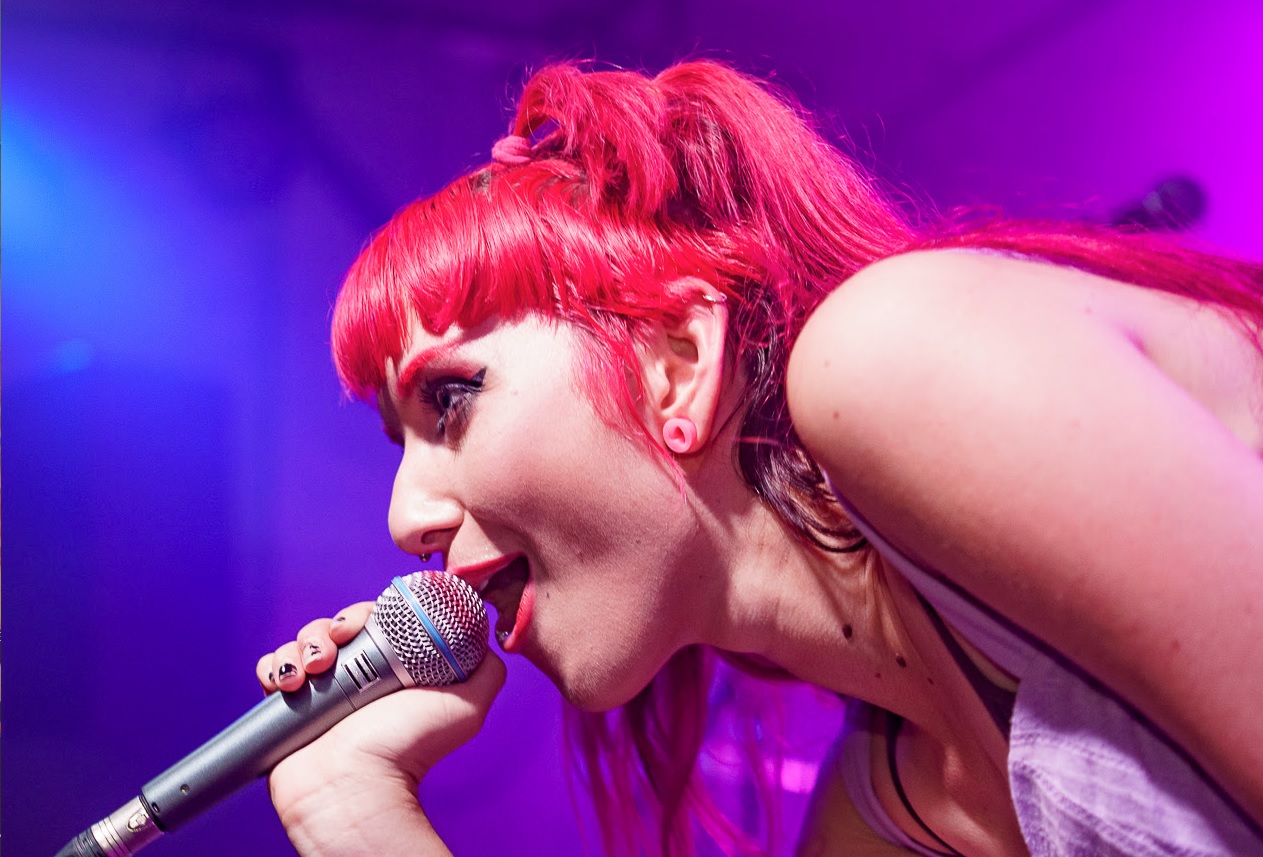 Hands Off Gretel were this evening finally in town, having had this concert rescheduled several times due to Covid 19. Hence the title of the tour being ‘Still Angry Tour’. The tour was picking up from where the band left off, promoting the release of their ‘Angry’ EP.

They were playing the Green Door Store for the very first time, having previously played live in Brighton at Patterns, The Hope & Ruin and The Prince Albert. Tonight has long been sold out. However, I’m certain that I have seen the venue fuller than this evening on many occasions, but having said that, it was still busy. 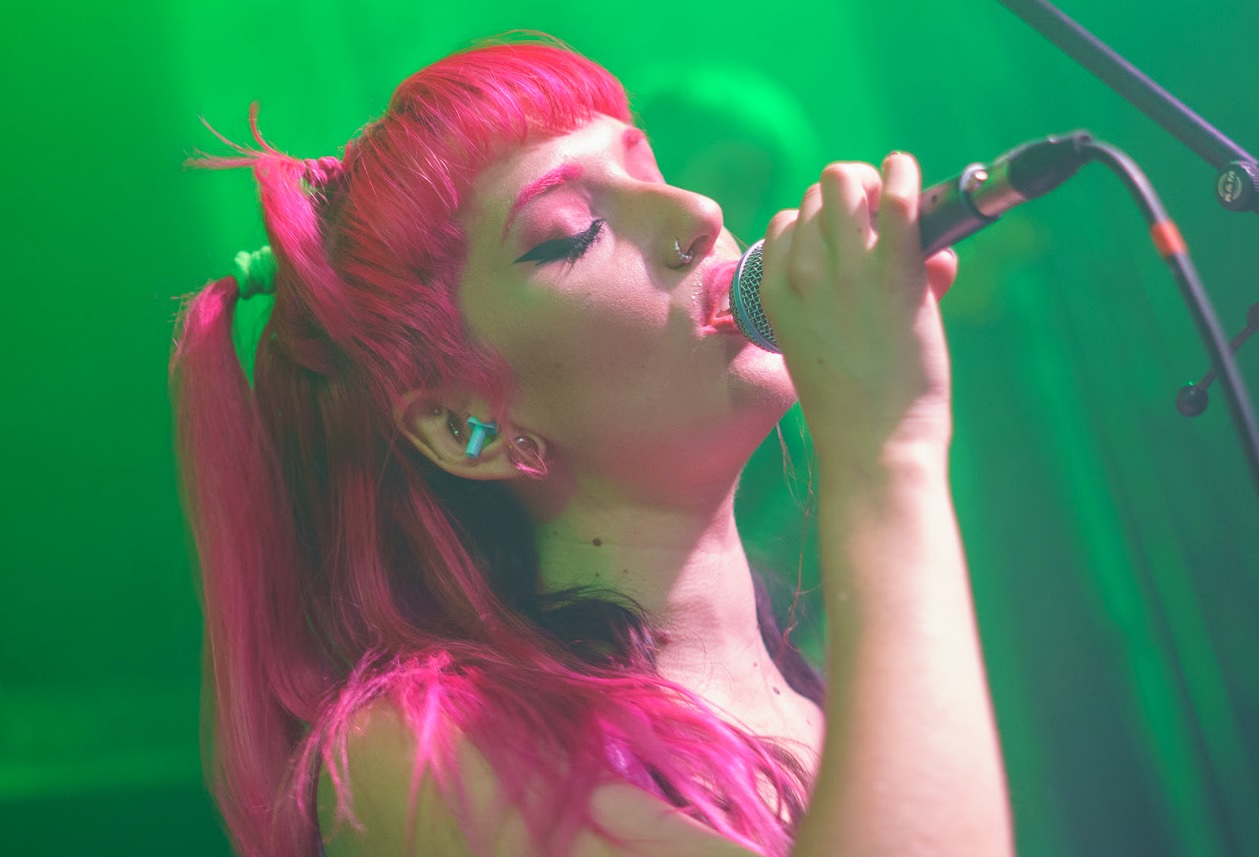 Hands Off Gretel are purveyors of seductive indie rock and grunge. They are a visually stunning band and a photographer’s dream. I reckon that they should get dolls made of each of them, and then export them to Japan, as I reckon that they have the potential to make it really big there! 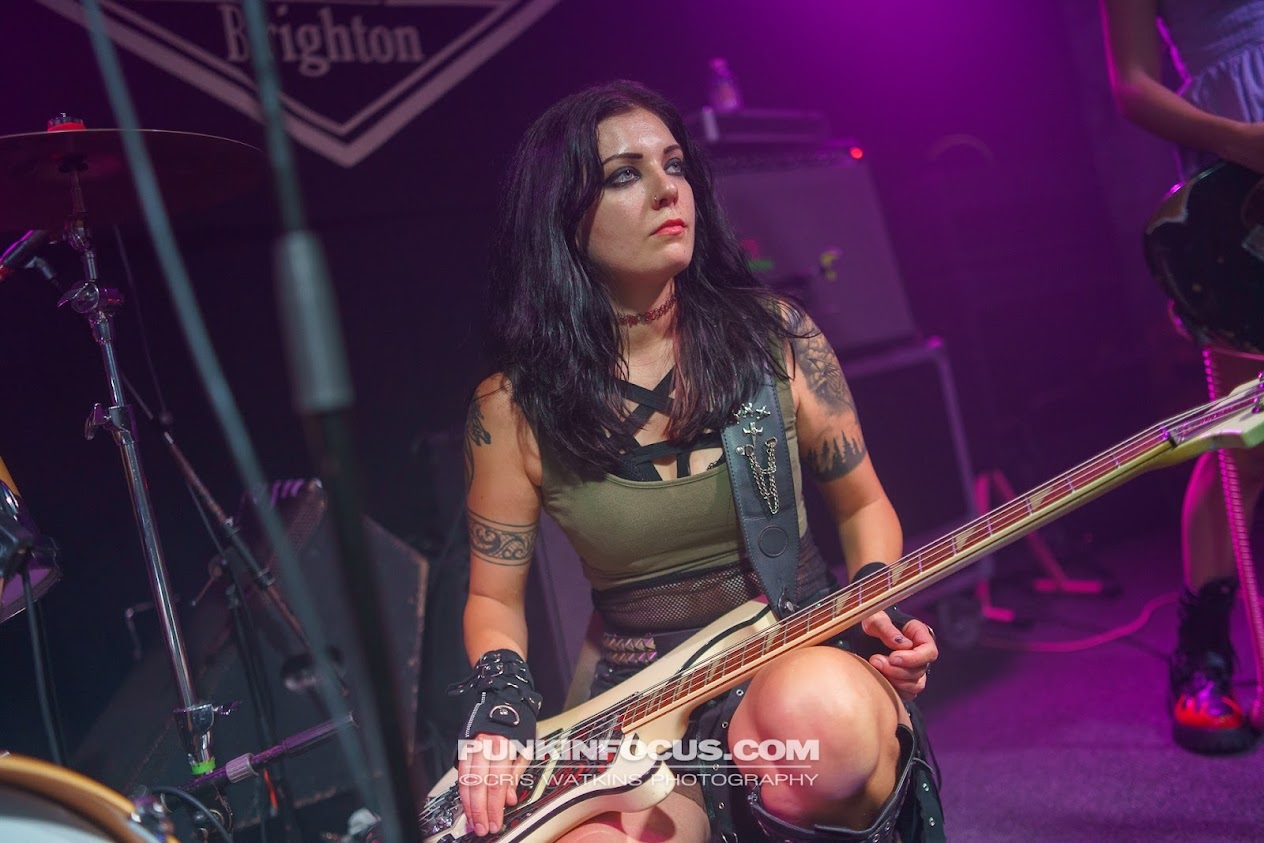 Therefore it comes as no surprise to learn that Hands Off Gretel have prior to lockdown, performed at several major festivals including Download, Isle of Wight, Rebellion main stage, Camden Rocks Festival, Great British Alternative Festival and headlined Loud Women Festival in London. The band has also toured Germany and the Netherlands. 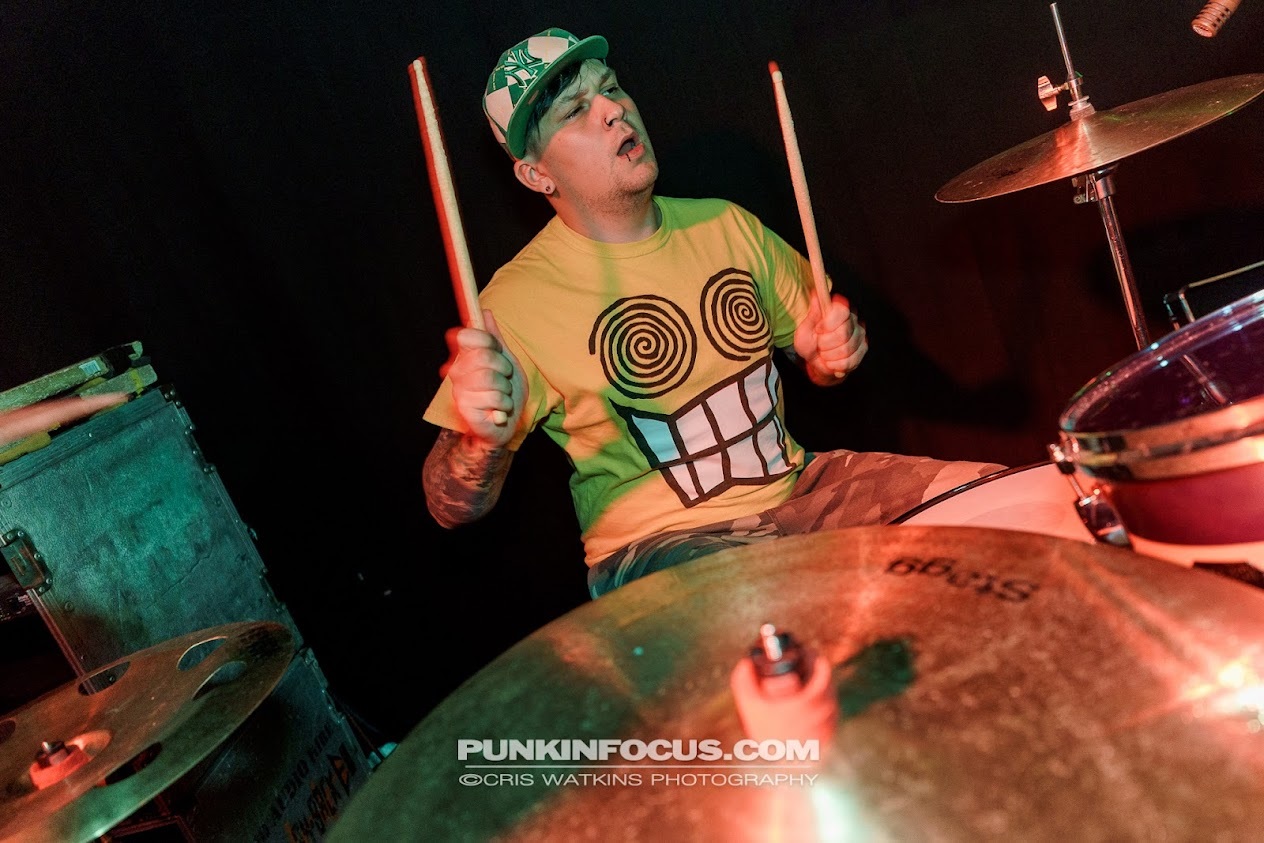 One of the first things I noticed on entering through the curtain that divides the bar area with the uneven floored concert area is that there is a rather mighty fine looking set of Gretsch drums positioned on our left of the stage (stage right). Clearly, ‘HOG’ are creating the right sort of image. This can also be said of Becky’s rather snazzy white bass with its red and silver pickguard. 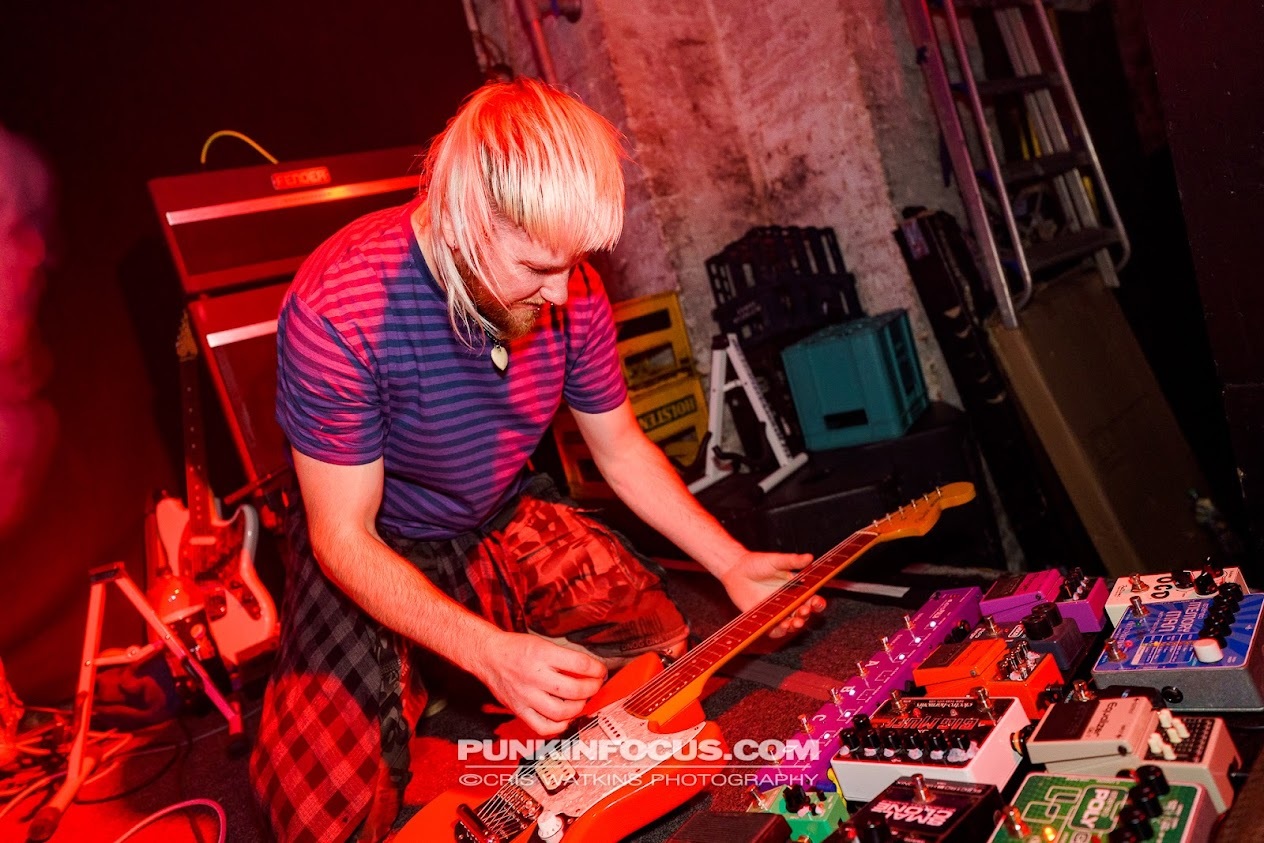 The band get underway at 9:01pm and perform an impressively long 75 minute set, consisting of no less than 18 original compositions and one rather special cover version to end with. 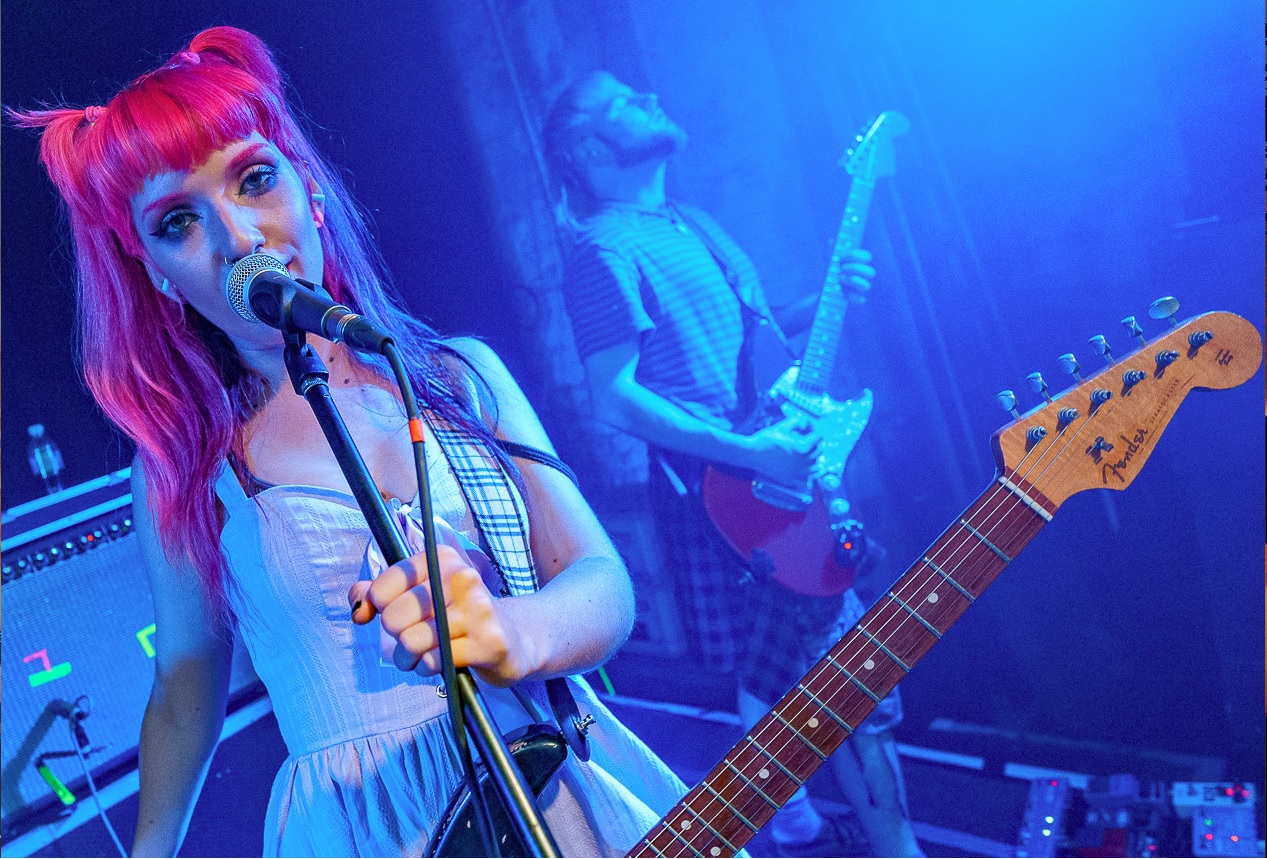 Prior to lockdown, the quartet had fire burning in the bellies and were rearing to conquer the world. They were full of ‘S.A.S.S’ and loved to show off their ‘I Want The World’ attitude, especially vocalist Lauren, whose idea it was to start the band. She previously knew how to work the crowd on my other HOG encounters. This evening though, she took a little while to get into her groove and she was somewhat ‘nervous’. Her accent would sound American at times and then she’d throw in the occasional word with a Barnsley twang. It could have possibly been the massive transition from sitting in their van ‘isolating’ moments earlier to suddenly throwing themselves into it on stage in front of people. Drummer Sam, seemed slightly tense too as he sneaked the occasional vape between tracks. Anyway, these are minor points and I must say that both ‘I Want The World’ and ‘S.A.S.S’, were very much enjoyed as part of their set this evening, especially the former. 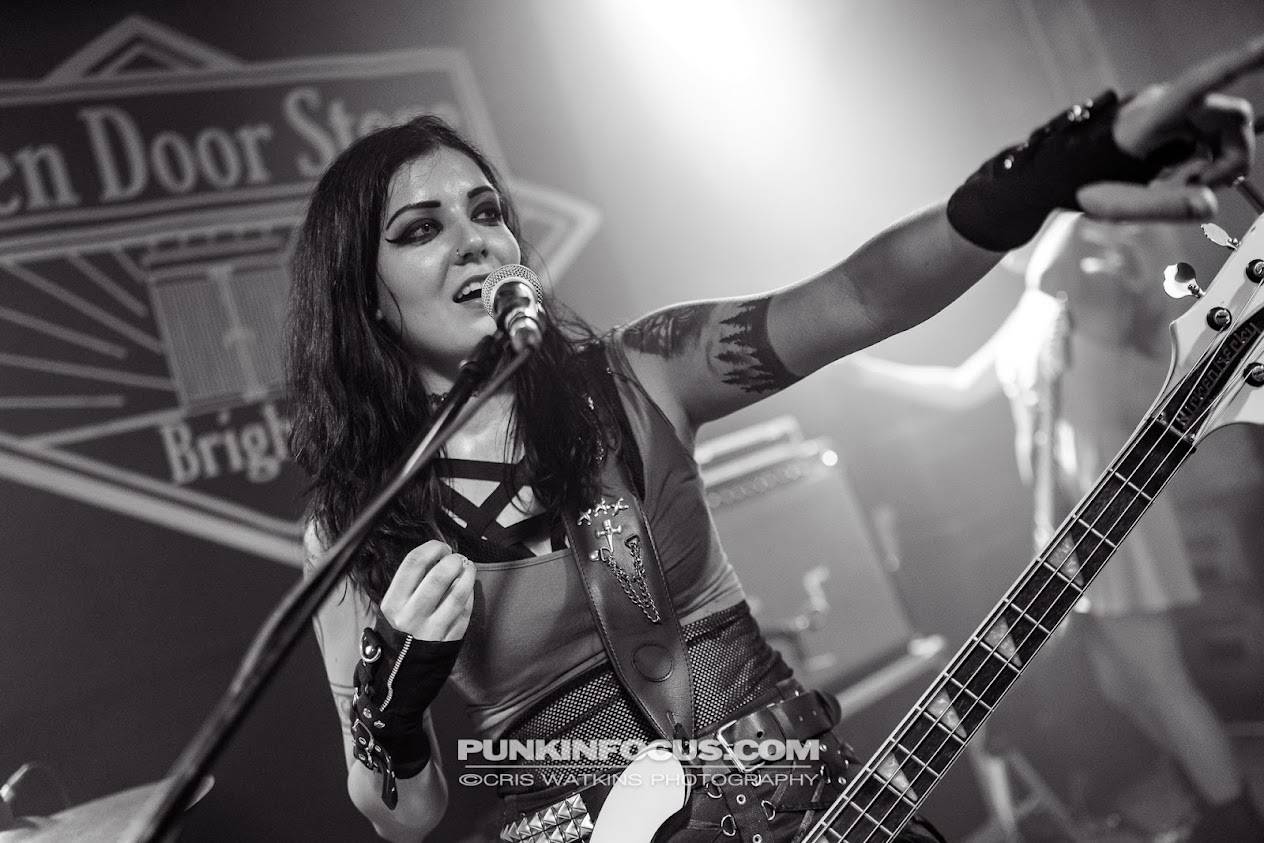 We were informed that their song titled ‘Alien’ is actually about Lauren’s cat. I wonder what the moggy looks like then? As the set progressed, for me, it got better and better and by tune eleven out of nineteen, which was ‘Rot’, (but it certainly wasn’t!) they were now on a roll. The drumming on the following tune ‘My Friend Said’ was arguably the best on the night. 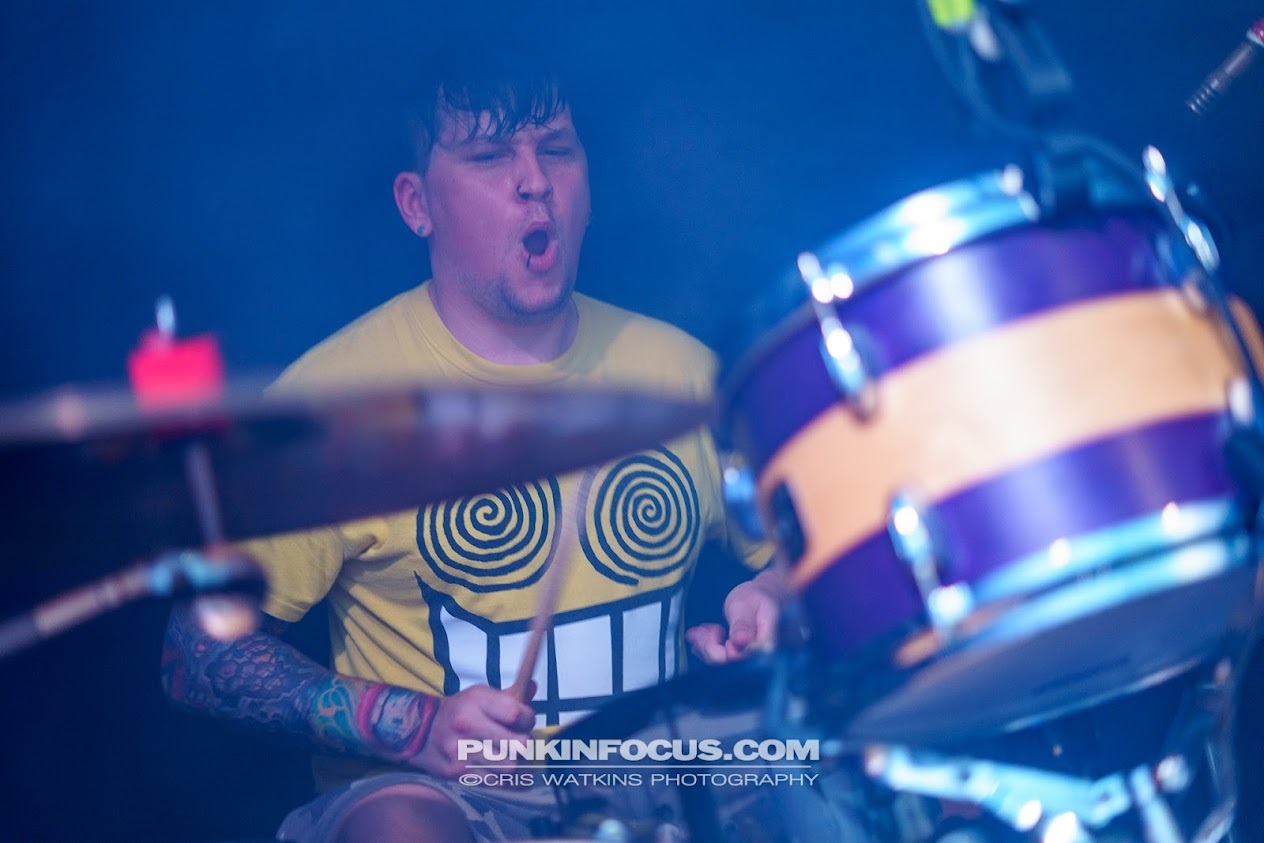 Track thirteen was a brand new as yet unreleased composition, which Lauren in her cool black boots with red flames on the front described as “brand new fresh out of the brain”. It was called ‘War’ and started with a really infectious repeated bass line courtesy of Becky and is certainly one to look out for in the future.

The Green Door Store engineer made good use of the dry ice this evening, which blasted down onto the band and the lighting was rather good too and as a result this made it feel as though they were playing at a larger venue like the Brighton Centre. 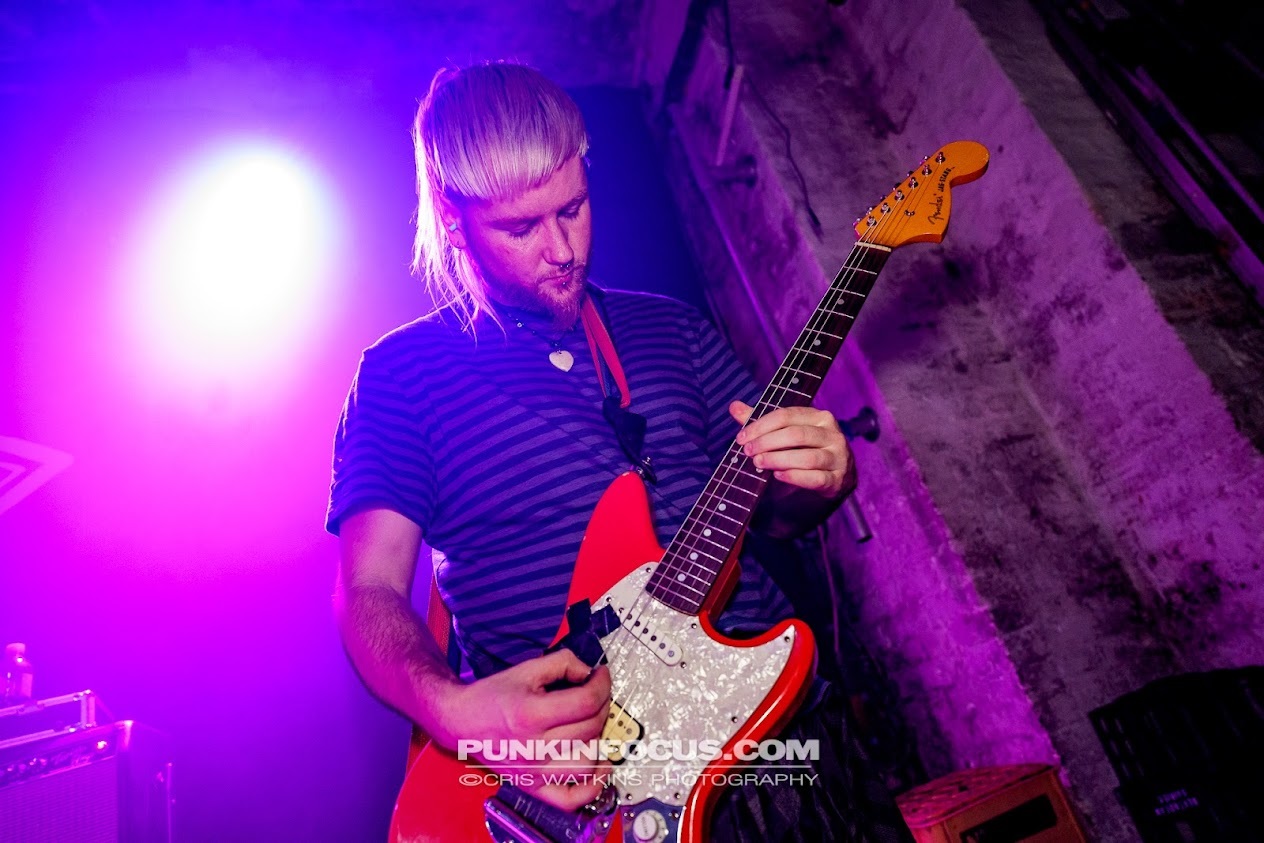 ‘She Thinks She Is Punk Rock and Roll’ was song fifteen and Sean’s swirling guitar riff behind the whole ‘punky’ song carried it along rather nicely. ‘My Size’ was next and that also rocked along at a decent pace too. There’s a guitar piece in there that gave me an impression of a clash or mix-up of ‘Because The Night’ by Patti Smith Group meets ‘(Don’t Fear) The Reaper’ by Blue Oyster Cult. 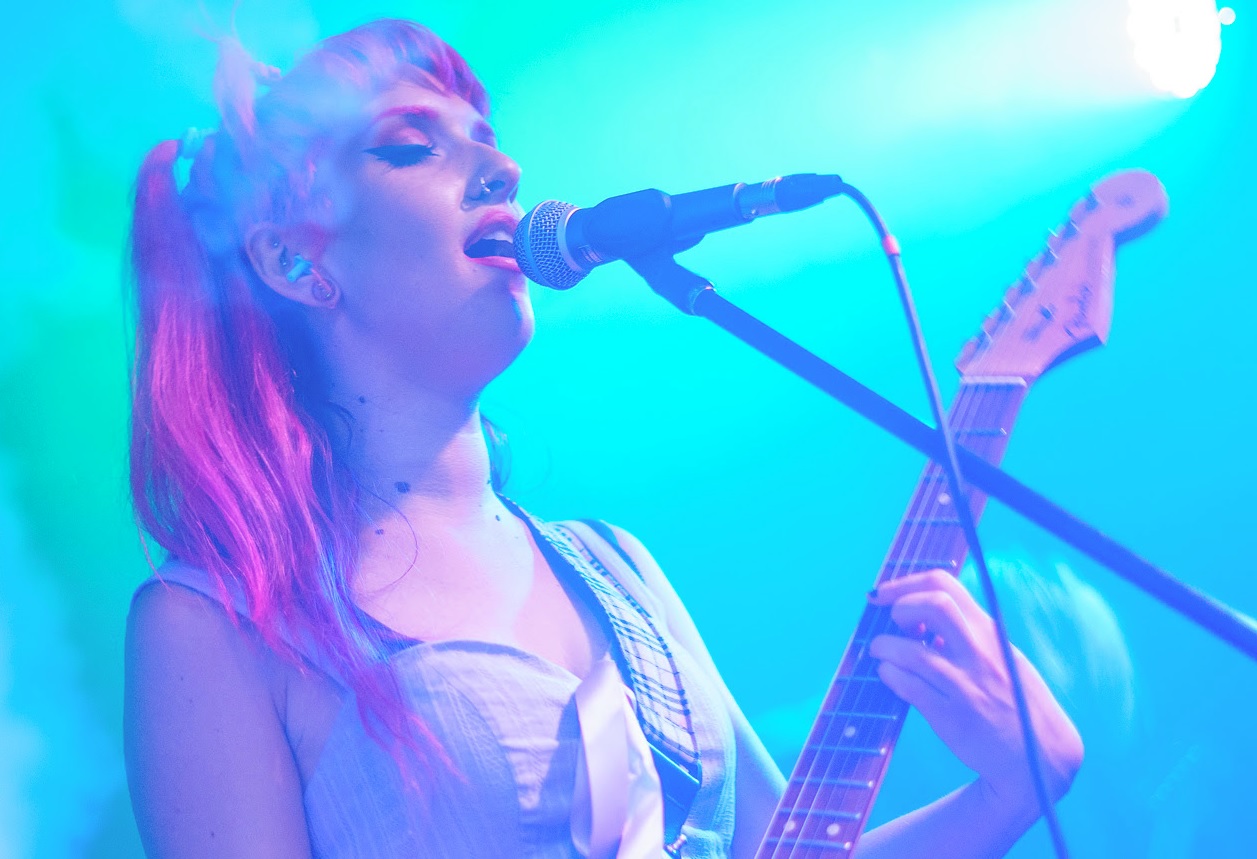 ‘Bigger Than Me’ from ‘The Angry EP‘ (which is available on 10″ limited edition white vinyl – buy yours HERE) has a chorus that to me sounded like ‘Head Like A Hole’ by Nine Inch Nails and thus was one of the highlights of tonight’s set. This was swiftly followed by ‘Kiss Me Girl’, where the quartet rocked with a capital ‘R’ and was even better than its predecessor.

There was time for just one more tune and that was their version of ‘Territorial Pissings’ by Nirvana. As you would expect, it grunged perfectly with screeching guitar playing, fast drumming, rumbling bass and screamy vocals. They did it proud and concluded proceedings at 10:16pm. 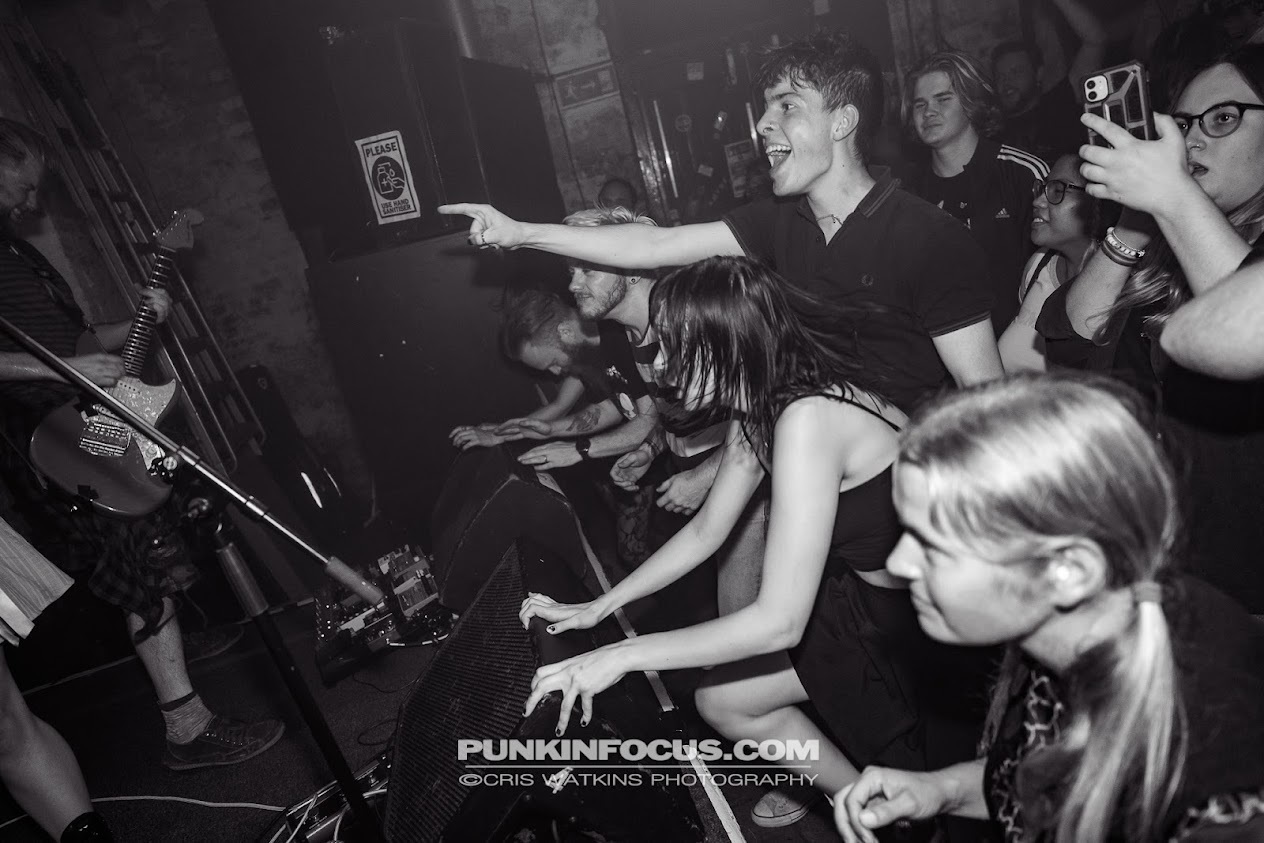 Also on the bill this evening were MY-HI and Salvation Jayne. 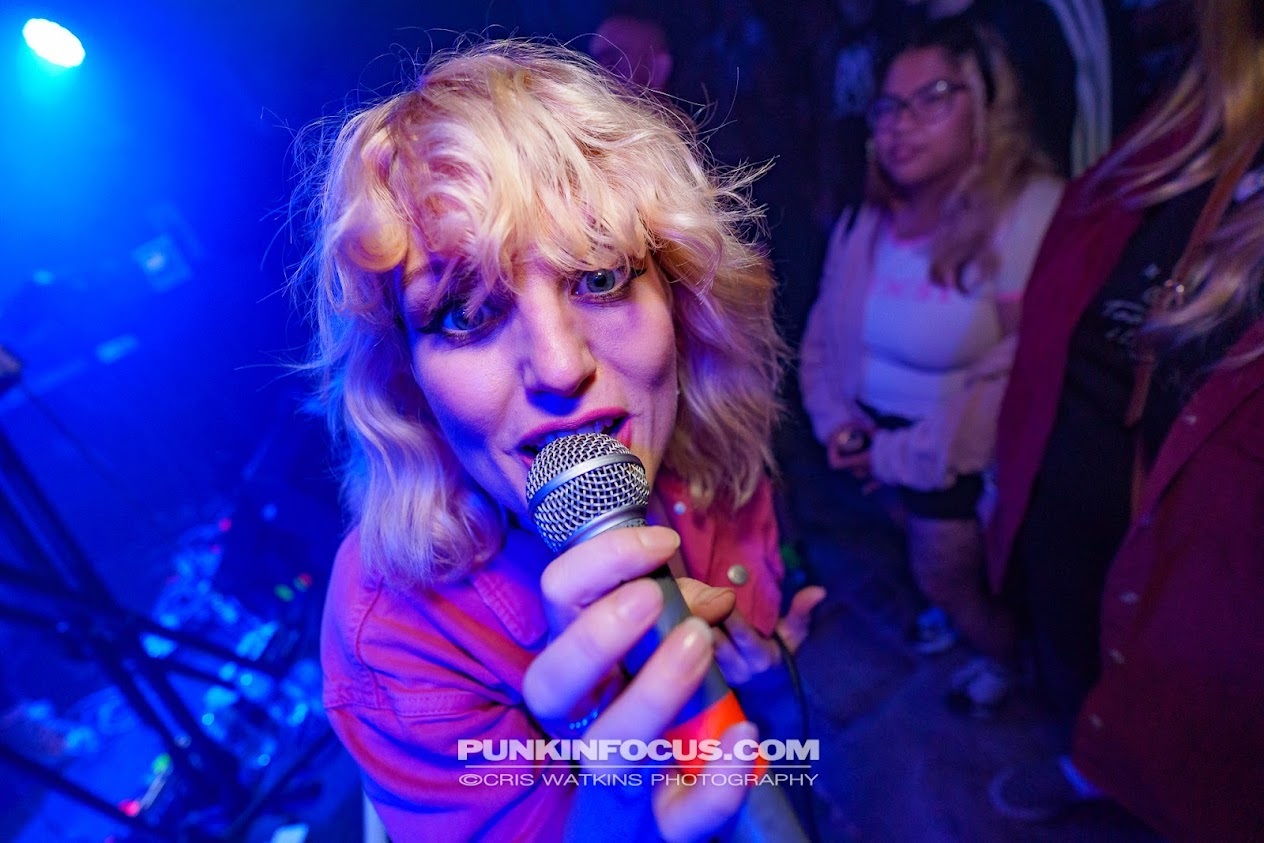 Having exploded onto the scene in 2017, Kent based quintet Salvation Jayne  have carved themselves a reputation for their white-hot, hook-laden explosive fuzzy riffs and glossy dream pop undertones. 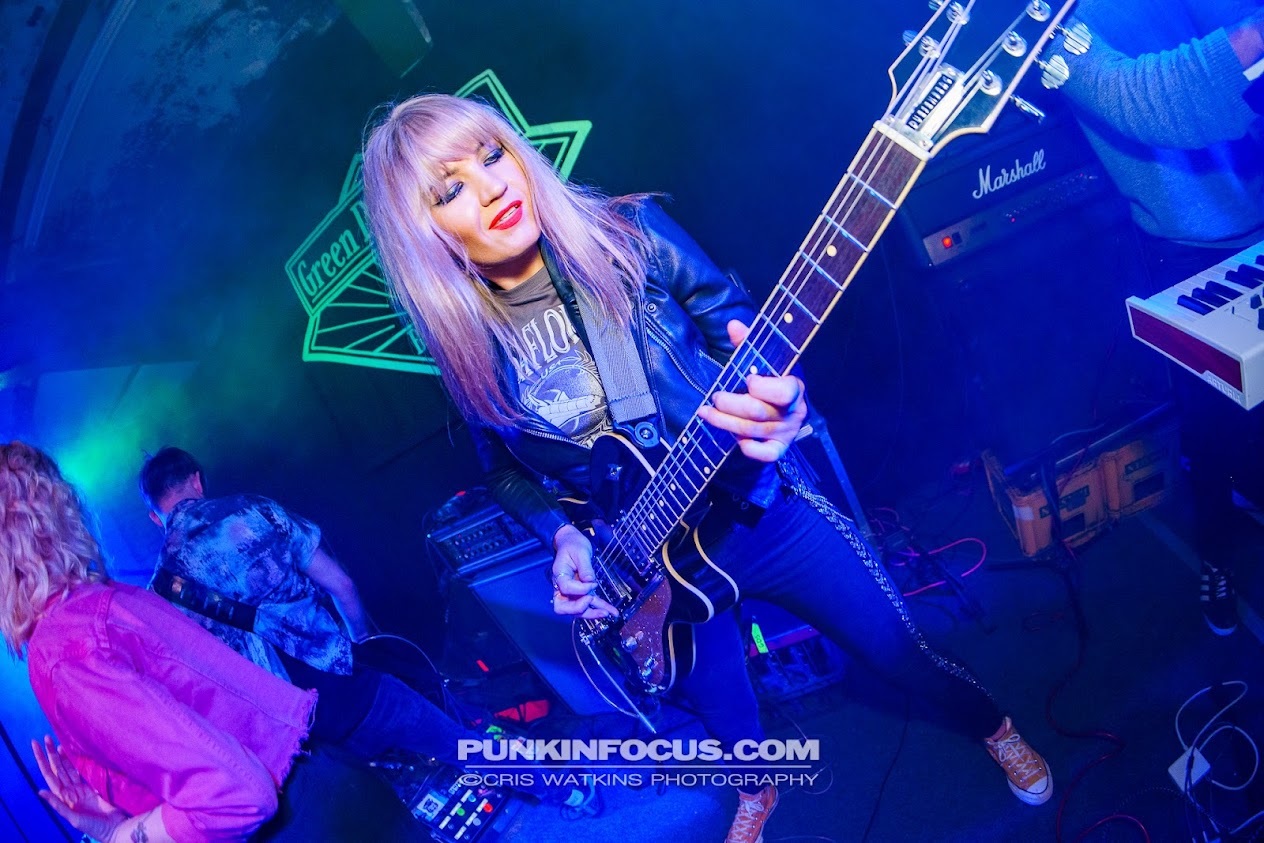 Tonight they commenced their 31 minute set bang on time at 7:30pm. In that time we were treated to a half a dozen energetic compositions. From the off, vocalist Chess stepped off of the stage and came down to punter level and engaged with us and enticed us shy and retiring lot to get closer and more in the mood. She certainly has a powerful voice, which suits the band’s format. That being the usual guitar, bass, drums, format, but with added Korg Wavestate Synthesizer accompanied with Arturia Keylab Essential 61 Hybrid Usb MIDI Controller Keyboard with Software and Chess also had a Korg. 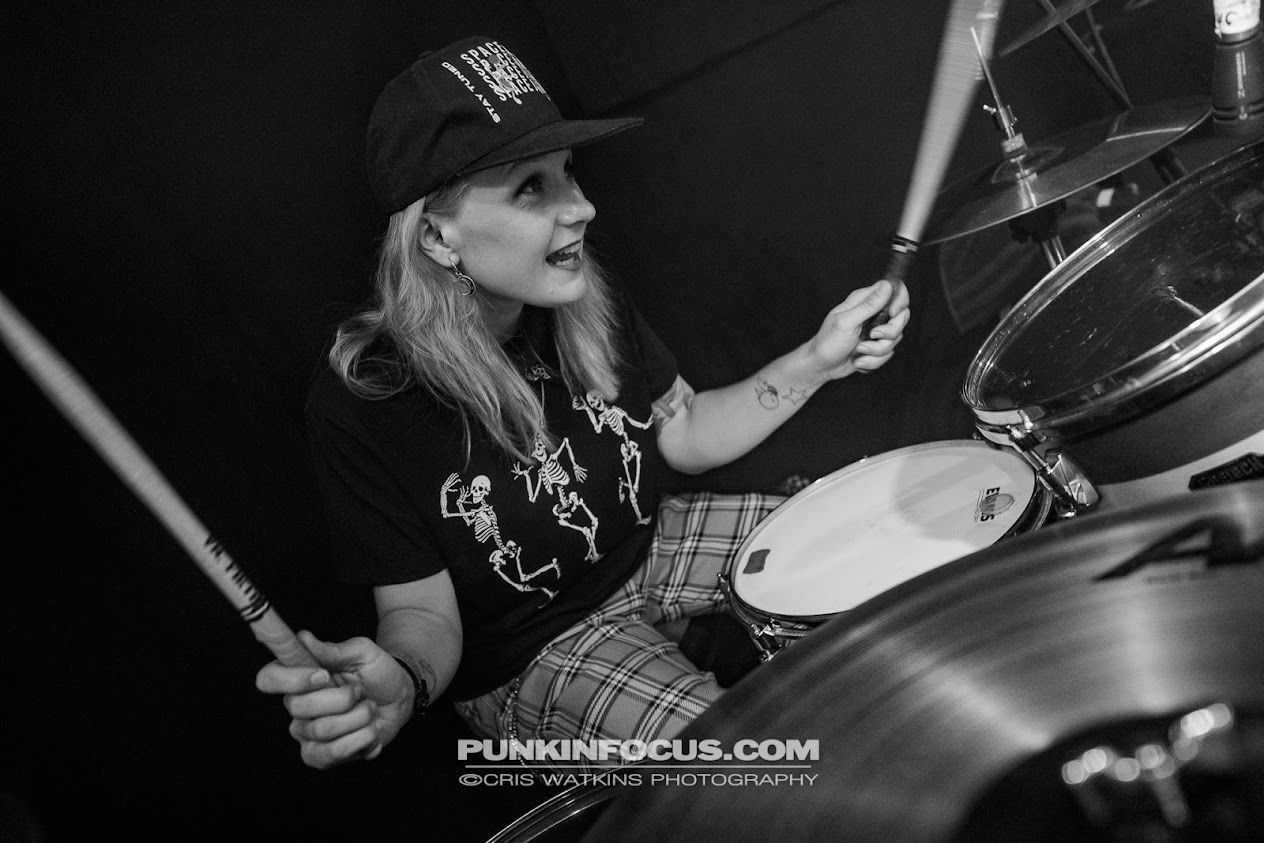 We learned that they will be releasing their debut album next February and that the current single taken from it is ‘Violent Silence’ and the follow-up single ‘Cody’ will be dropping on 1st October. ‘Cody’ was the highlight of their set for me, as it had a decent rumbling bass courtesy of Dan, and early U2 style guitar sounds from Holly, accompanied with sounds akin to the backbeat of ‘Blue Monday’ by New Order, courtesy of Erim 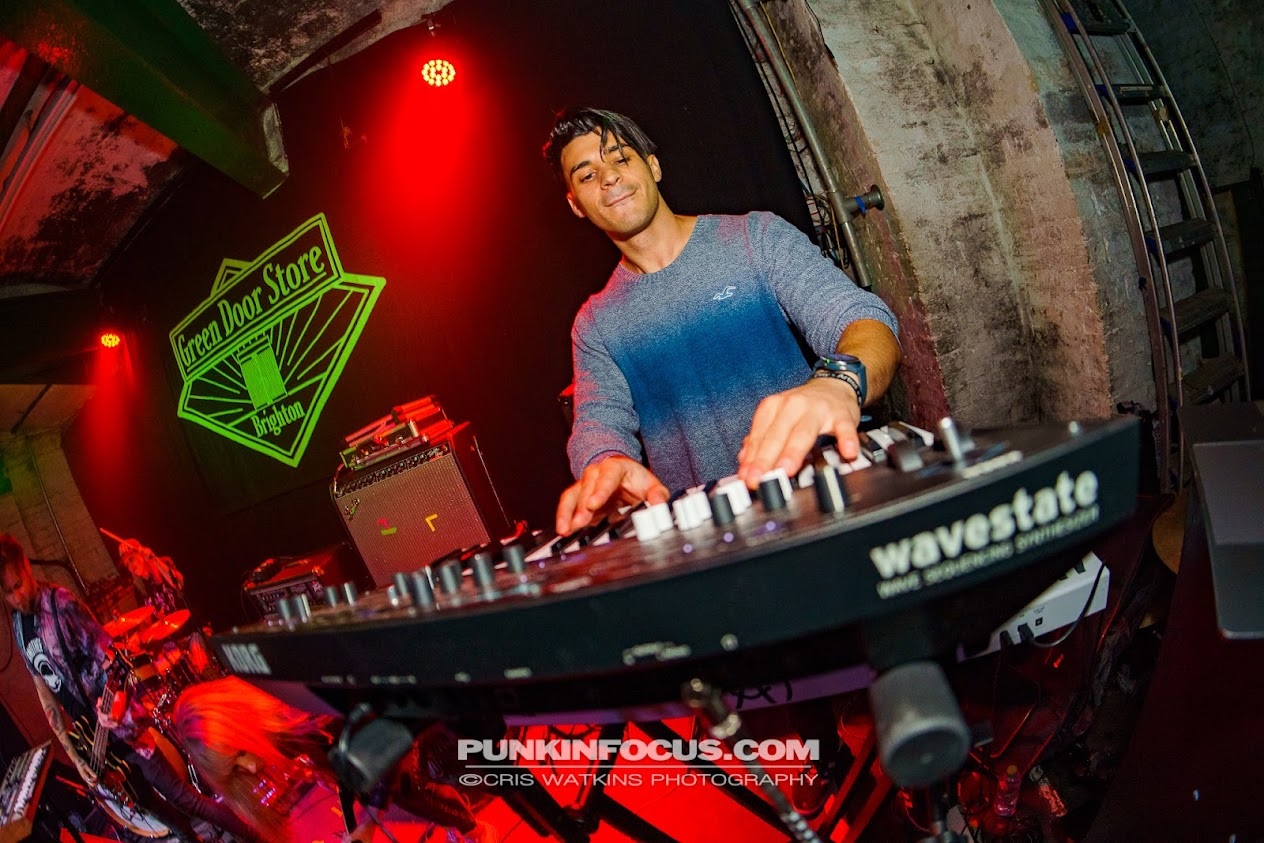 Salvation Jayne are an accomplished set of musicians who are purveyors of ‘funky rock’ and certainly wouldn’t be out of place as a support band to Gary Numan. It was worth coming out tonight just to see these guys. 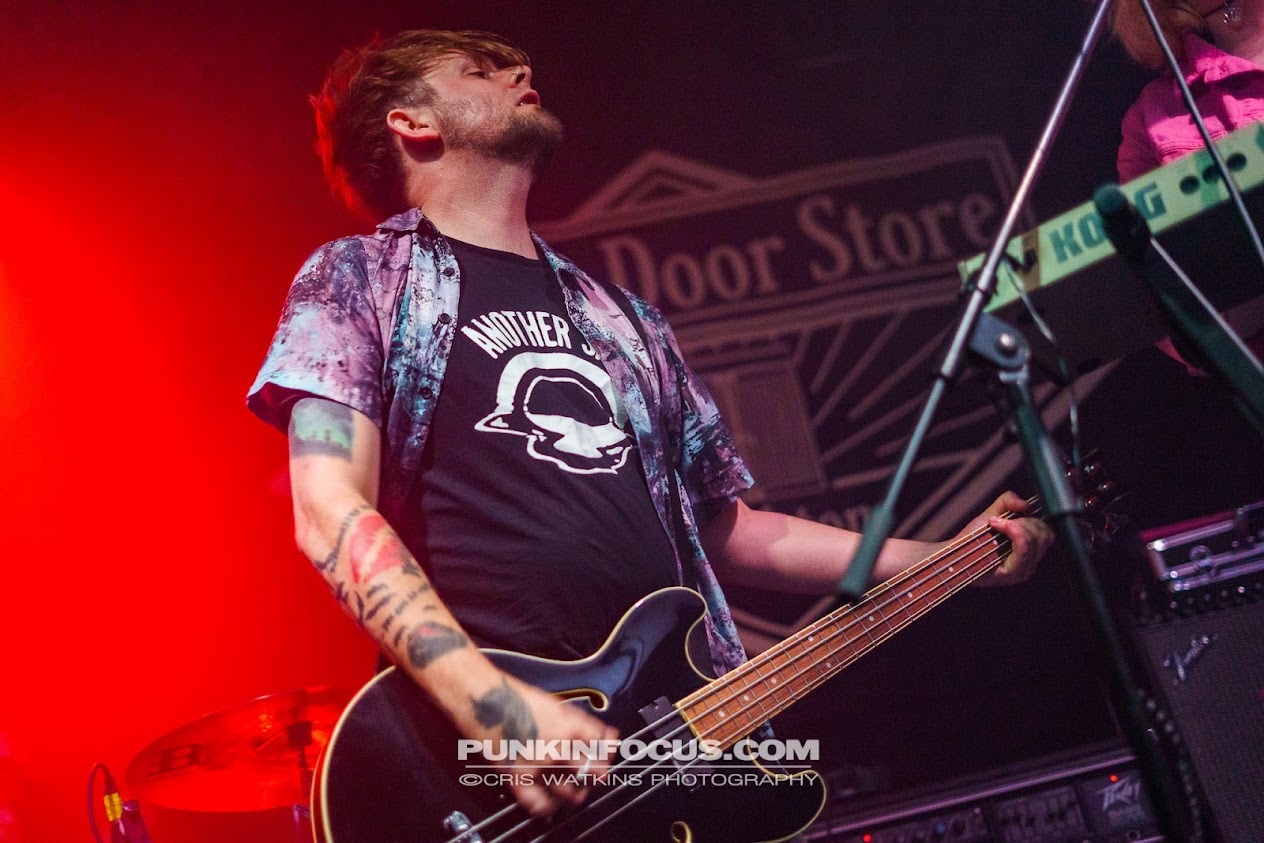 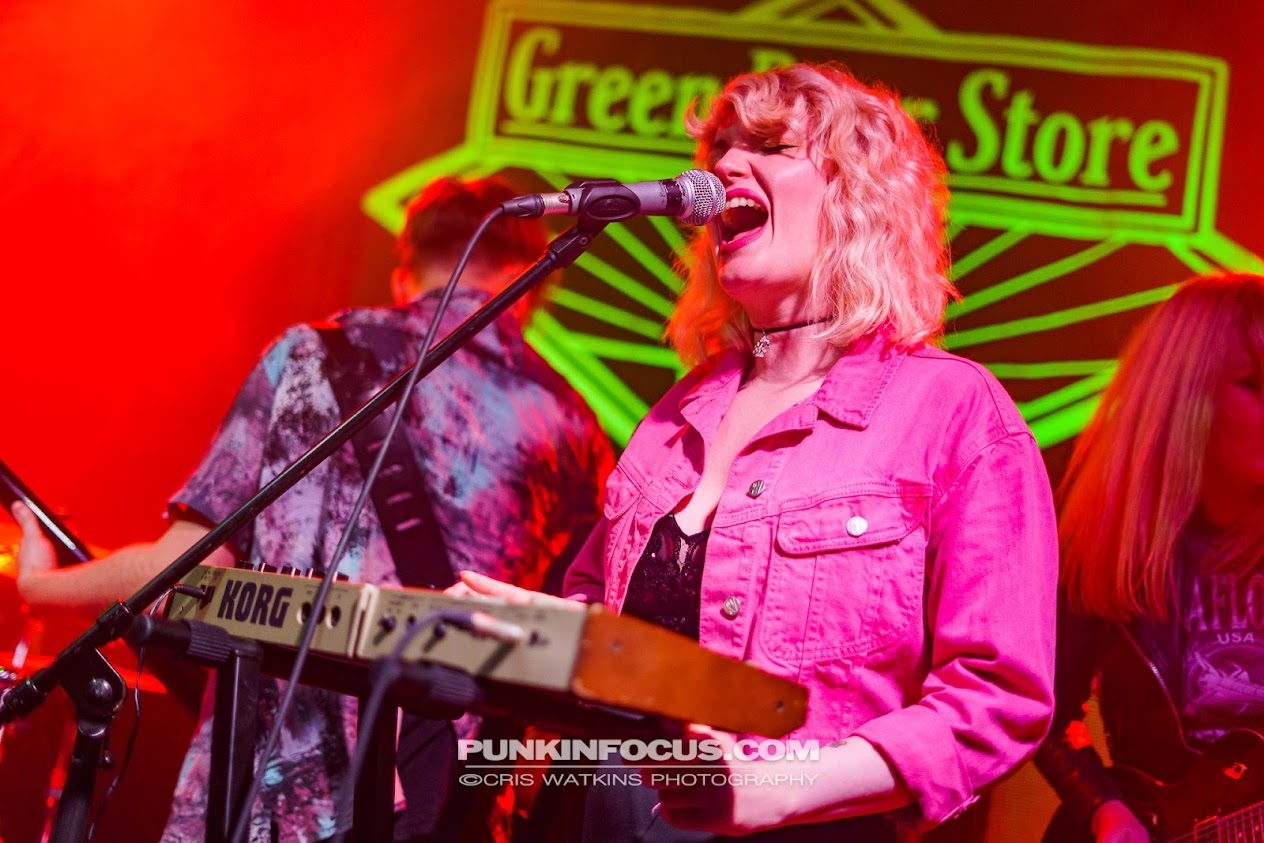 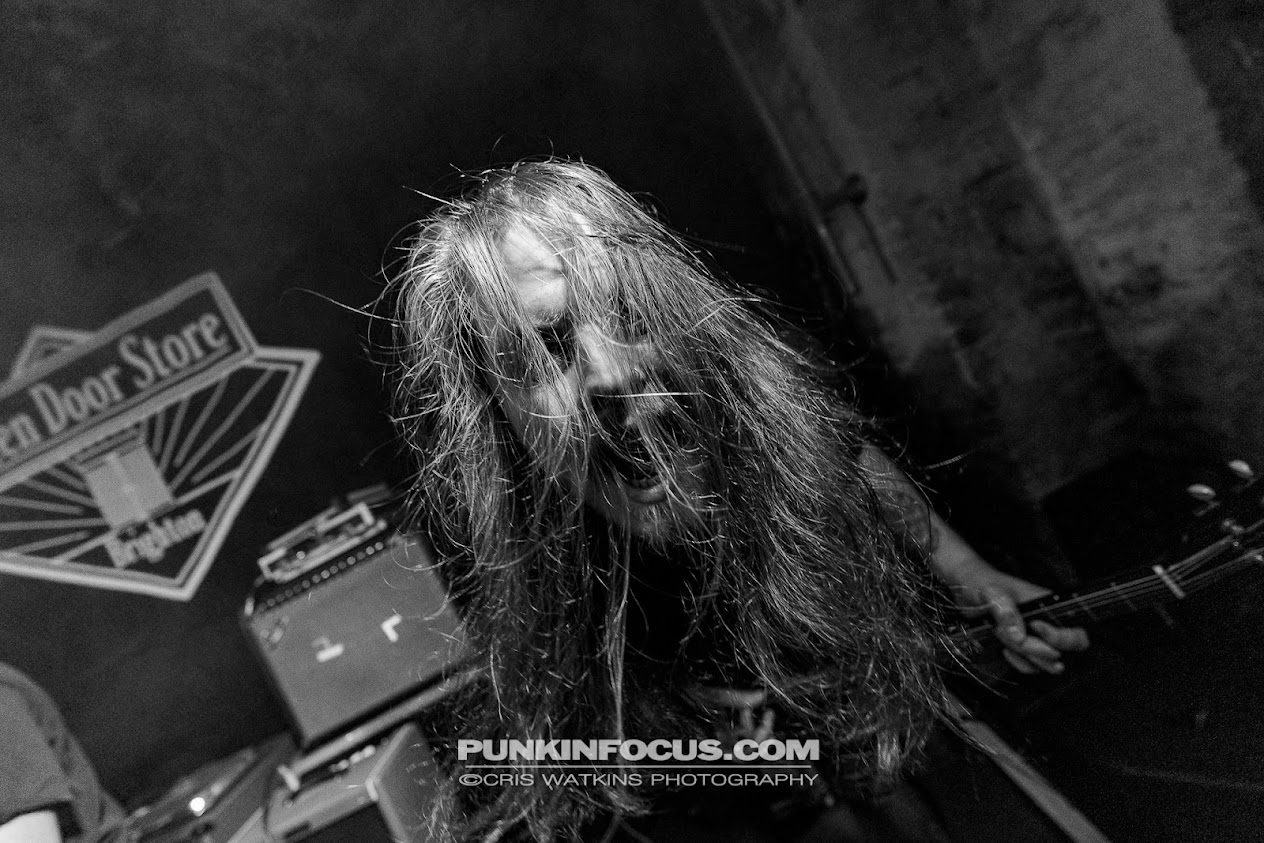 Swiftly following on 15 minutes later (at 8:16pm) from Salvation Jayne were Brighton band MY-HI, who incidentally, we had seen supporting Hands Off Gretel back on 6th April 2019 at The Hope & Ruin. Back then their intro music was ‘Requiem’ by Killing Joke, which certainly put you in the mood for their set. This time however, there was no intro tape, but at least the drummer was wearing a Killing Joke t-shirt, which he dispensed with after their second number. 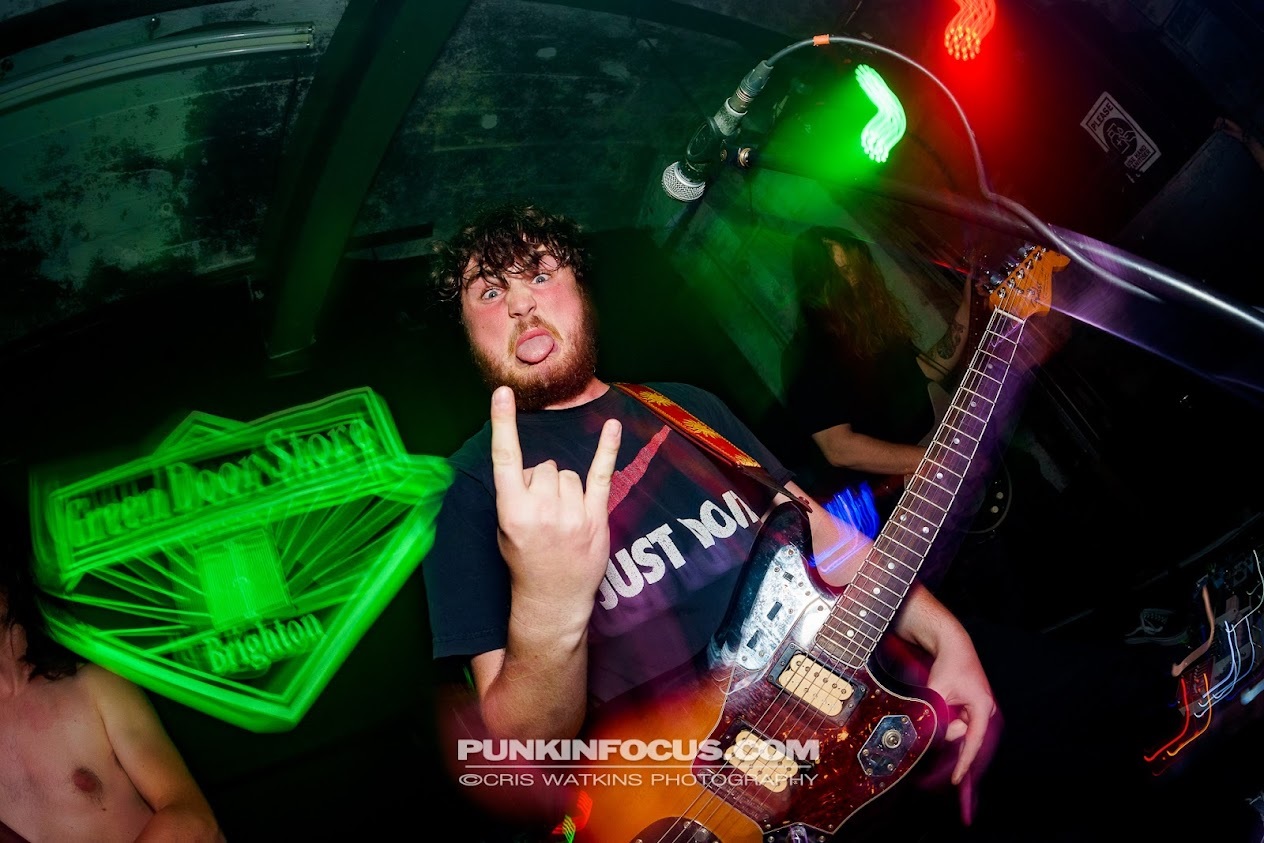 MY-HI formed back in 2016 and began writing, which quickly turned into a weekly religious practice until covid struck. They have developed their heavy alt rock sound, and have released three singles and played a cluster of shows around the country. 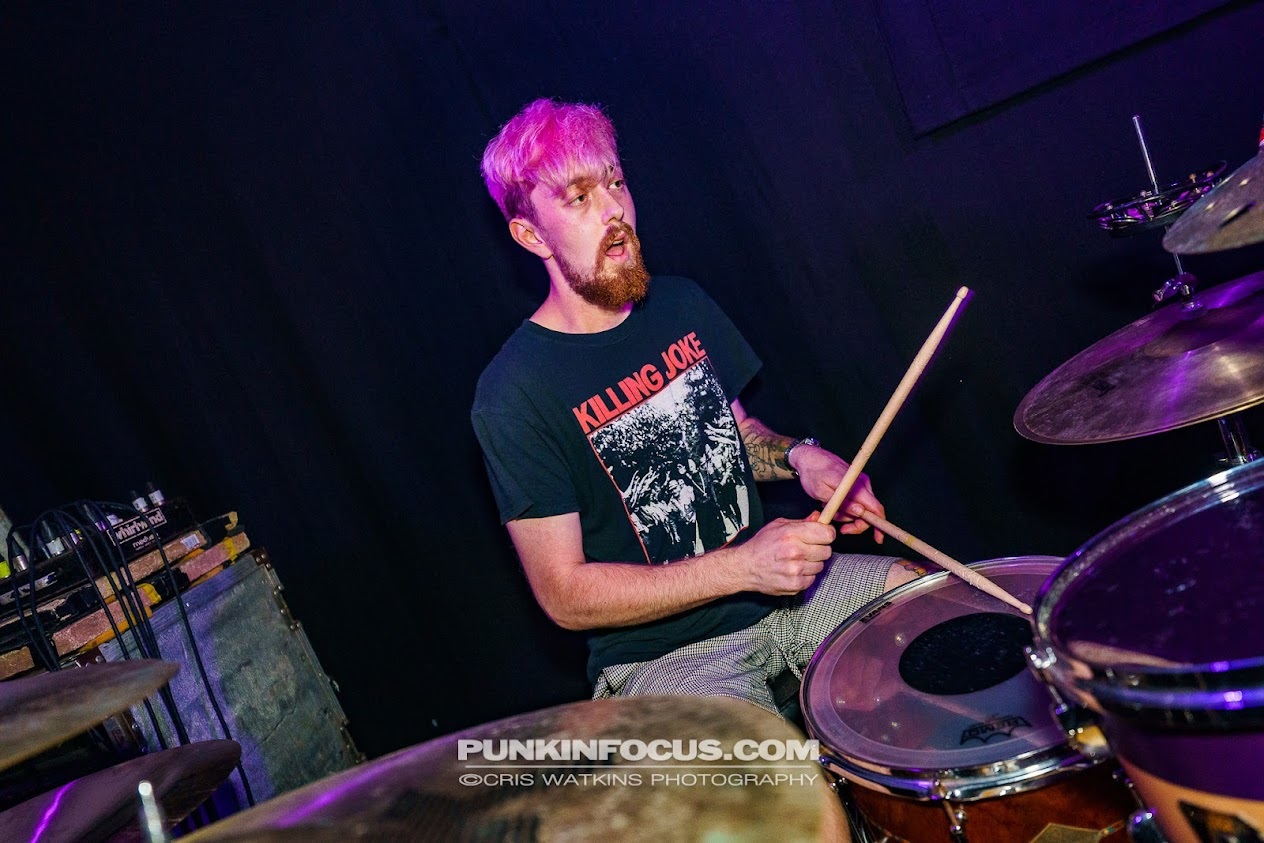 Two years ago when we saw them, they had the most boisterous crowd on the night, but times change, and so has MY-HI.

On our last encounter I reported: “I picked up straight away from the very first number that Sam’s guitar sure did sound like early days U2, which is not a bad thing as that’s when they were exciting. I thought that new boy Jack’s drumming was rather tight and the harmonious vocals were powerful too. My fave track of theirs on the night was called ‘Digital’”. 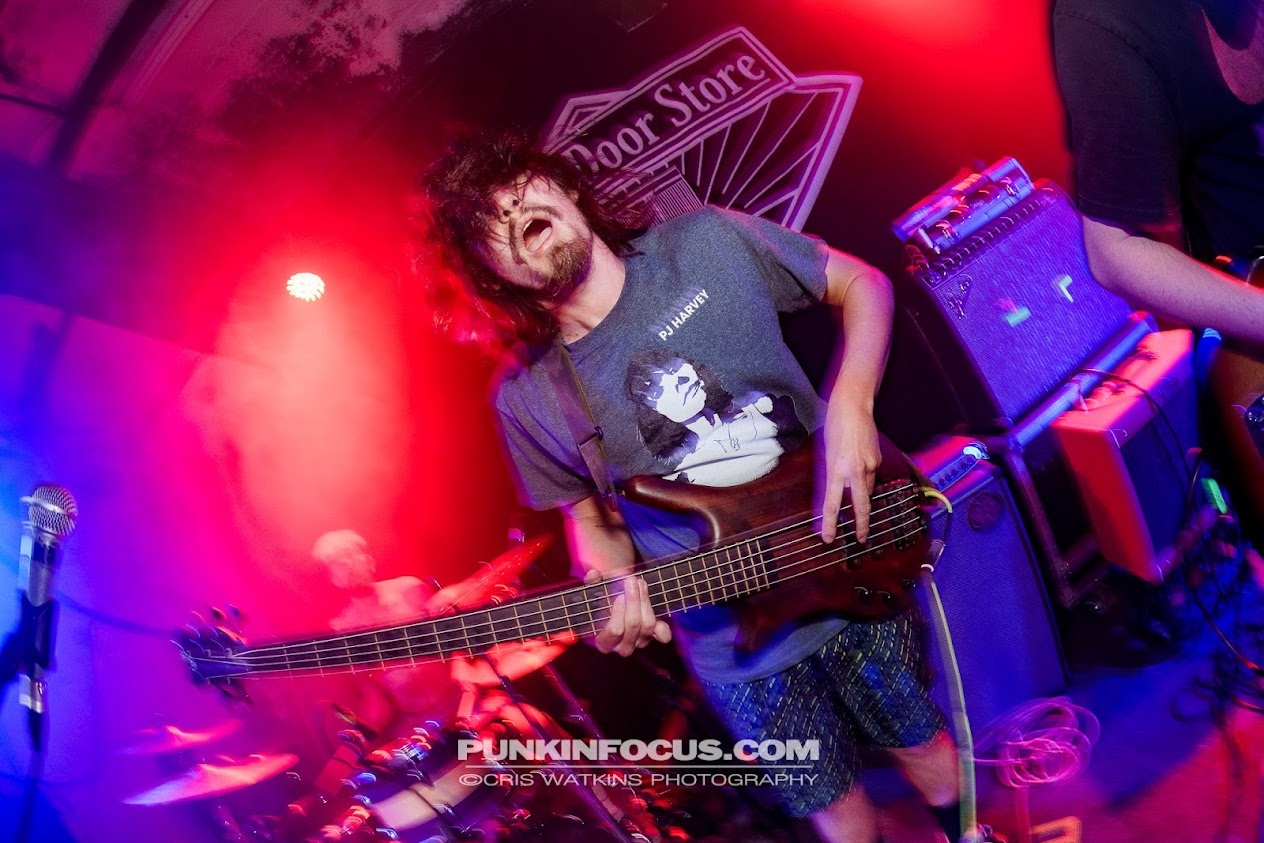 This evening during their 28 minute set, the above was replaced by borderline heavy metal with shouty vocals, and although the crowd enjoyed them, this time around they were certainly not for me! I preferred them much more last time. At 8:44pm it was over and the bar beckoned. 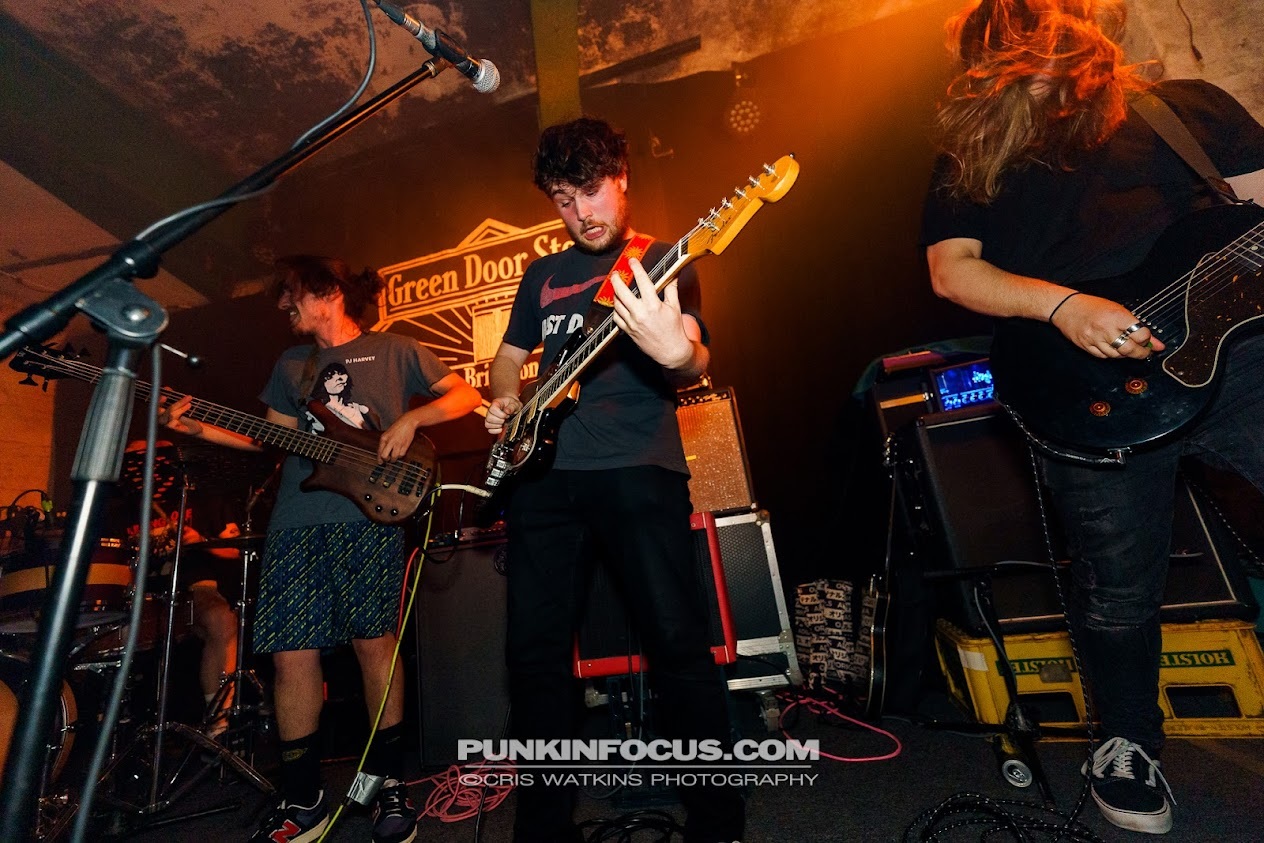 Having said that, you can next catch MY-HI performing live in town, when they play a headline set at The Bee’s Mouth at 10 Western Road, Hove, BN3 1AE on Friday 29th October. They will be supported by Bloodhound (who are a Post-Modern Grunge three-piece from Hull) and Callus Tongue. Grab your tickets HERE. 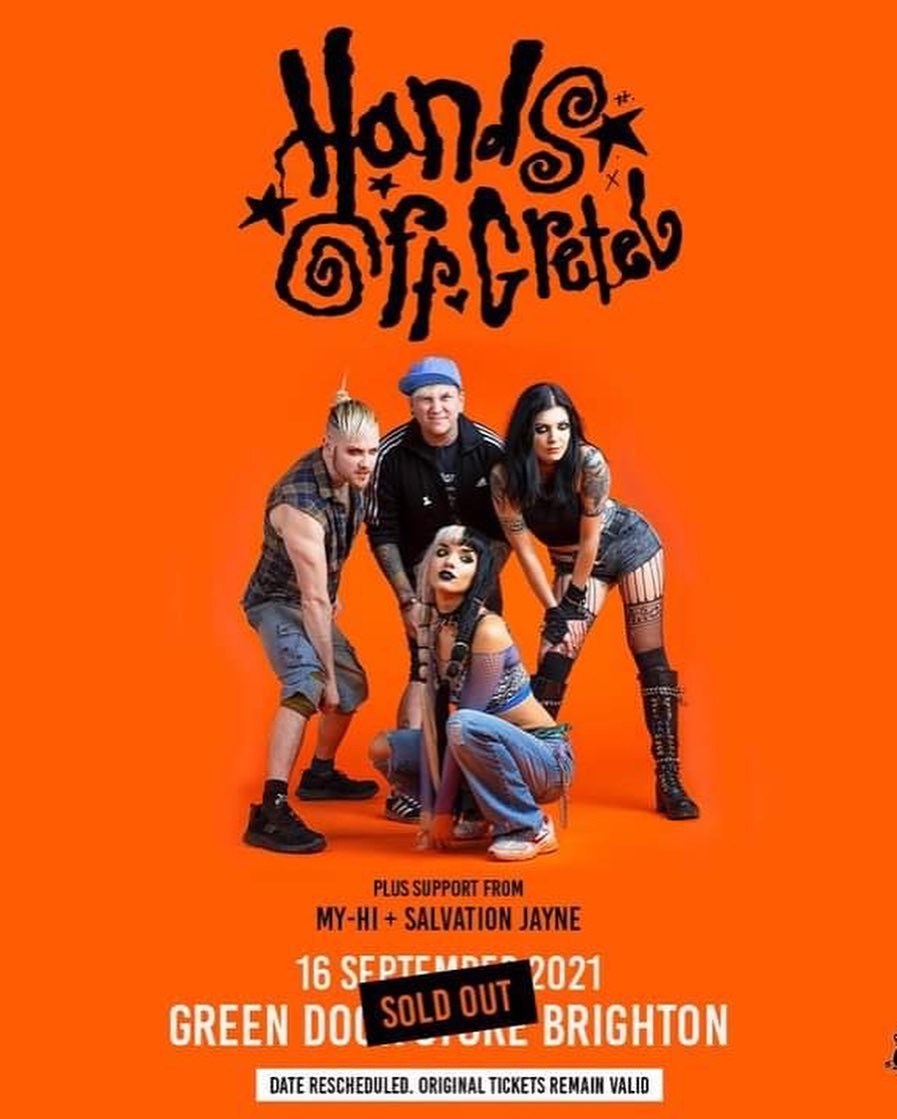 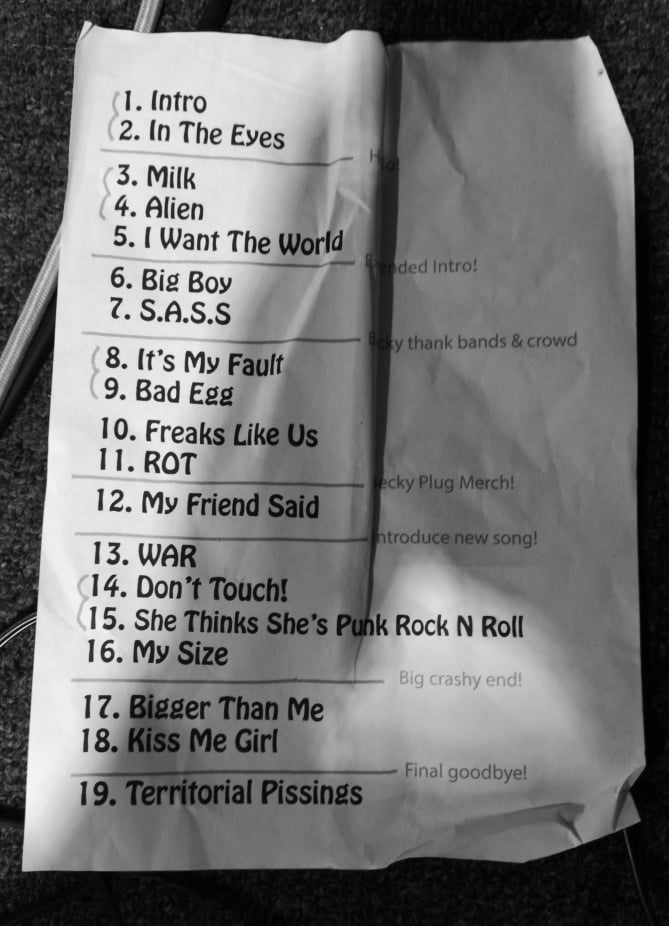 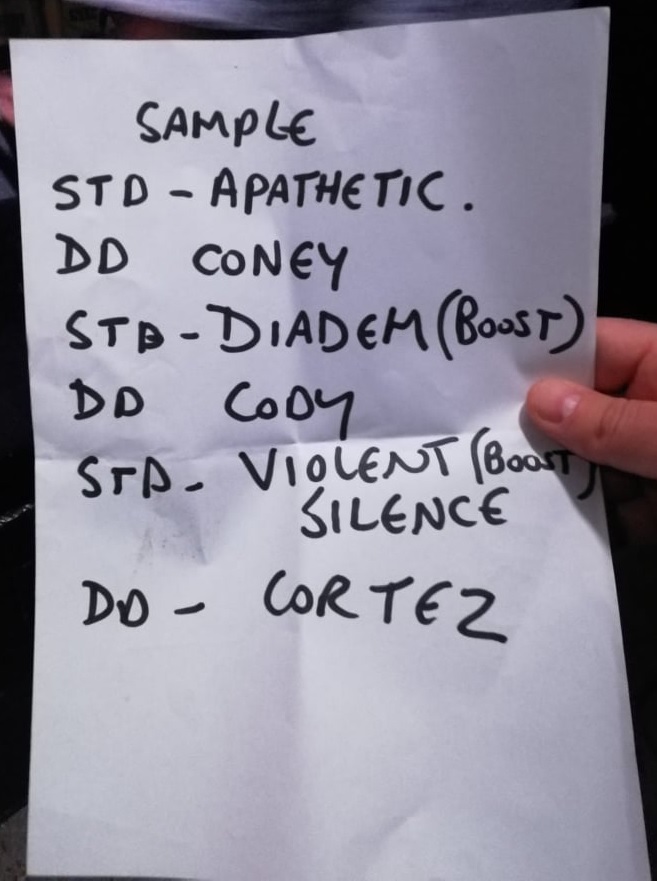 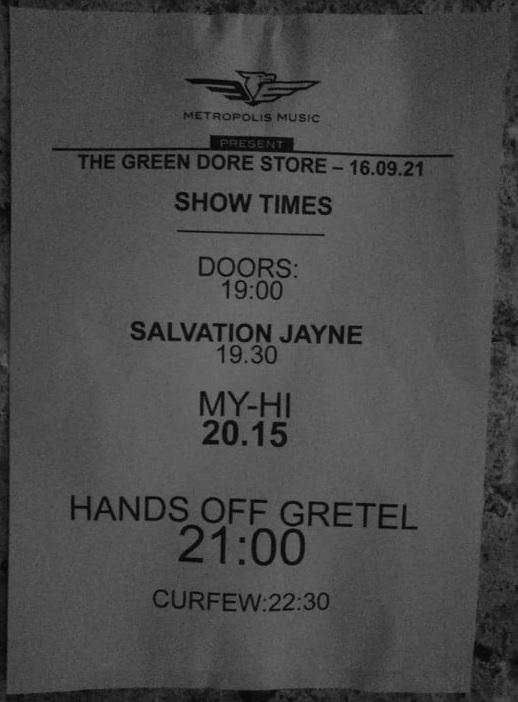 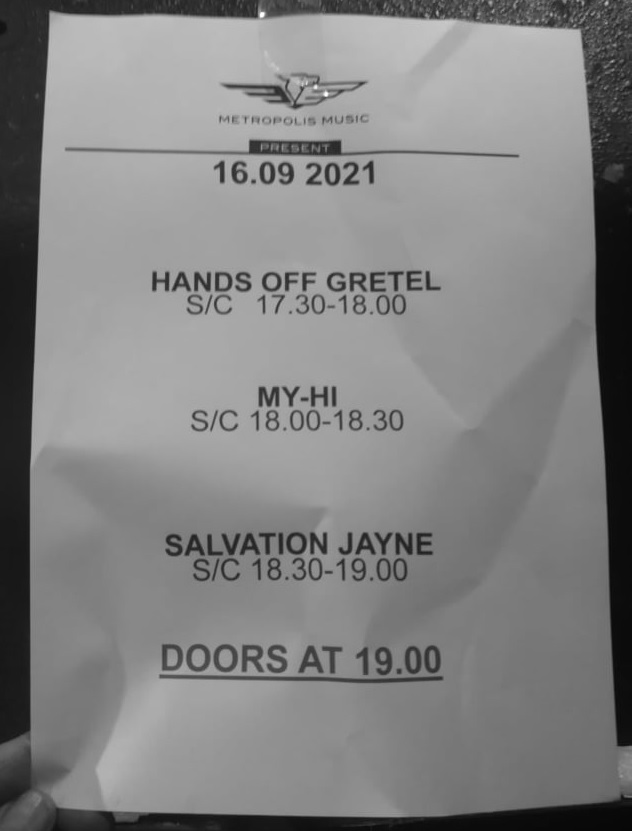 And finally and unusually the soundcheck times!