Two long-serving councillors have called for the grade II listed Victoria Fountain in the centre of Brighton to be restored and switched back on. 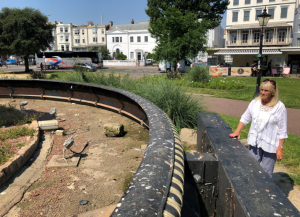 Dee Simson and Carol Theobald, both Conservatives, spoke out after Green councillor Tom Druitt said that Brighton and Hove was “the best it’s ever been”.

They said that nine out of ten were not working in an area where seven rapes had been reported to Sussex Police.

Councillor Simson, who speaks for the Conservatives on the council’s Tourism, Equalities, Communities and Culture Committee, urged the council to return the Old Steine Gardens and Victoria Fountain to their former glory.

The fountain is 175 years old this year and next year marks 70 years since it was listed as a monument of national importance.

The Conservatives said: “The Victoria Fountain, built in 1846, has been switched off for many months now and allowed to become overgrown with weeds, with graffiti covering its surrounds.

“The inactive Victoria Fountain is part of a host of problems in the Old Steine Gardens, including broken lights, tents and anti-social behaviour.

“Nine out of ten of the council’s lamps are not working, leaving the area pitch black at night.

“Adding to the sense of neglect, Brighton and Hove News has also reported that the grade II listed dolphins that once adorned the fountain were found left unattended and uncovered in a field. 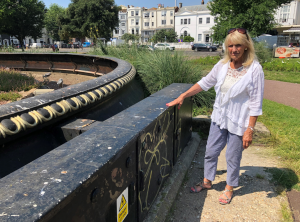 Councillor Simson said that the Victoria Fountain and other public assets were in a dreadful state and should be given more attention.

She said: “The Victoria Fountain used to be a centre point and symbol of Brighton and a reflection of a city that took pride in its appearance and welcomed visitors.

“It has been left switched off for months – if not years – and overgrown with weeds and the surrounding Old Steine Gardens left to decay.

“The area is in a dreadful state and also highly unsafe for women to pass through after dark with nine out of the ten lamps broken.

“It looks like the council has given up on maintaining this area which is sad for the city.

“Turning the fountains back on and fixing the nine broken street lights will bring some pride back.

“There can be no excuse from the council as it recorded a £10 million surplus this year.” 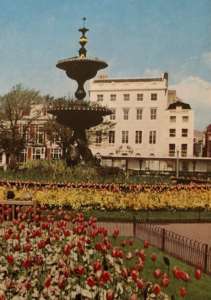 Councillor Theobald said that the state of the Old Steine Gardens had declined rapidly under the current council and the administration had a responsibility for turning the situation around.

She said: “Old Steine Gardens and the Victoria Fountain are in a sorry state.

“The fountain used to be properly maintained with fencing in place around it to protect it although this has now been removed by the council and the fountain switched off.

“There also used to be beautiful planted gardens maintained all year round to welcome visitors.

“It was so sad to hear that the historic dolphins were left unattended in a field.

“The council really needs to do better and look at some of the pictures from the past to see how well maintained this area used to be.” 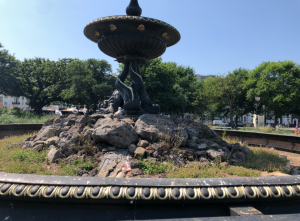 She added: “The Greens have said this week that the city is ‘the best it has ever been’ but a look at these photos might make them think again.

“Brighton and Hove looks the worst it has ever looked. With scruffy gardens, dreadful pavements and verges, branch roots growing from trees, graffiti and litter, dirty toilets, seafront railings that need painting and dilapidated seafront terraces.”

Councillor Druitt said on Twitter: “Tired of people talking Brighton down. It’s only the locals I hear doing it. Everyone who comes here to visit loves it. And walking around, it’s easy to see why.

“This is the best city around. Those of us who are fortunate enough to live here should be grateful.

“The city is the best it’s ever been. In every direction there is stuff happening and so much regeneration. The seafront is beautiful and the eastern seafront too is really getting its mojo back.

“Yes there are problems. There are always problems. And yes, some get worse, as some get better. We absolutely have to keep working at the things that need attention. But we have also come a long way, with so much.” 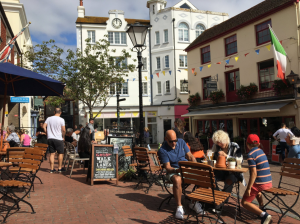 He highlighted the new Hanningtons Lane, adding: “It’s beautiful. On the beach there are more beachfront bars and restaurants than there have ever been, with nice outdoor seating and the rebuilt Shelter Hall.

“Going west, all the arches are beautifully restored, full of quaint little shops, galleries, the West Pier Trust and Rampion visitor centres. And people playing beach tennis and basketball … And everywhere people having a great time.

“The West Pier still hanging on in there, weirdly still incredibly striking and rather beautiful and the old supports turned into public art.

“And then there’s the Upside Down House, looking like it’s just blown over, and the beautifully restored bandstand, ready for a wedding.

“Next to Hove Lawns is the beautiful Brunswick Town seafront, one of the architectural jewels in the city’s crown.”

He praised “the lovely little streets on the eastern edge of Hove” and said that “Western Road was looking pretty – the hanging baskets make a real difference”.

He added: “I just love the retro food wagons in Churchill Square.”

And he ended with a few words about St James’s Street – “epicentre of gay Brighton, a bohemian melting pot of colour, where everyone is made to feel welcome” – calling it: “The gateway to Kemp Town, a town within a city with the feel of a village.